been keeping this quite for a while now but I have managed to raise 15 albinos that hopefully will be double dose for pb. I crossed a kk smokey pinoy male sourced from Grummie and an albino (singapore) sourced from Karl. 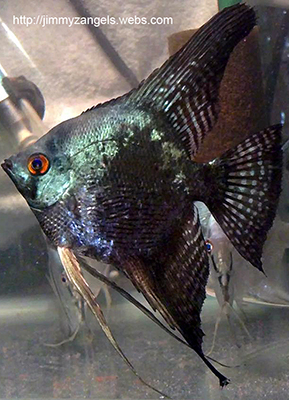 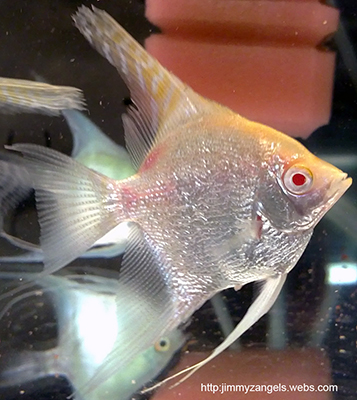 I raised their offspring: 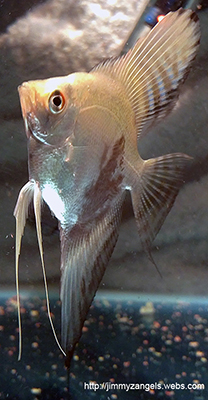 Then back crossed to get: 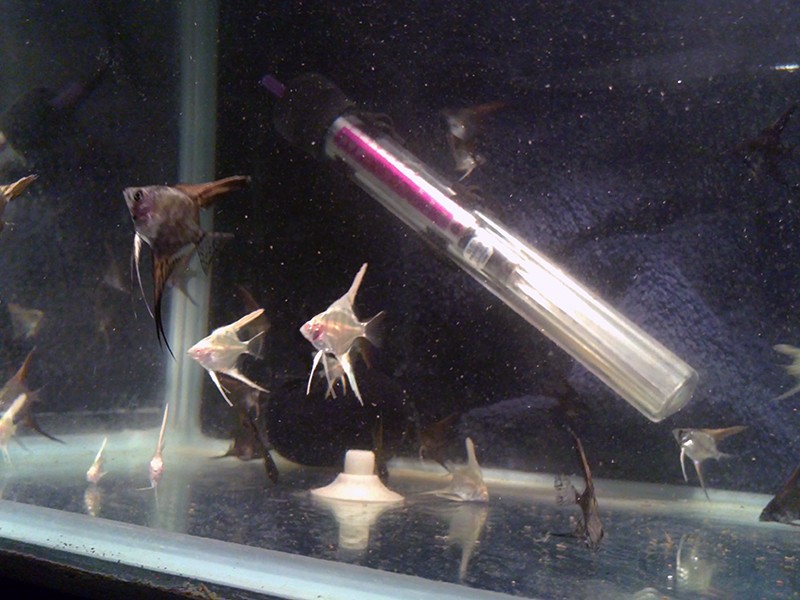 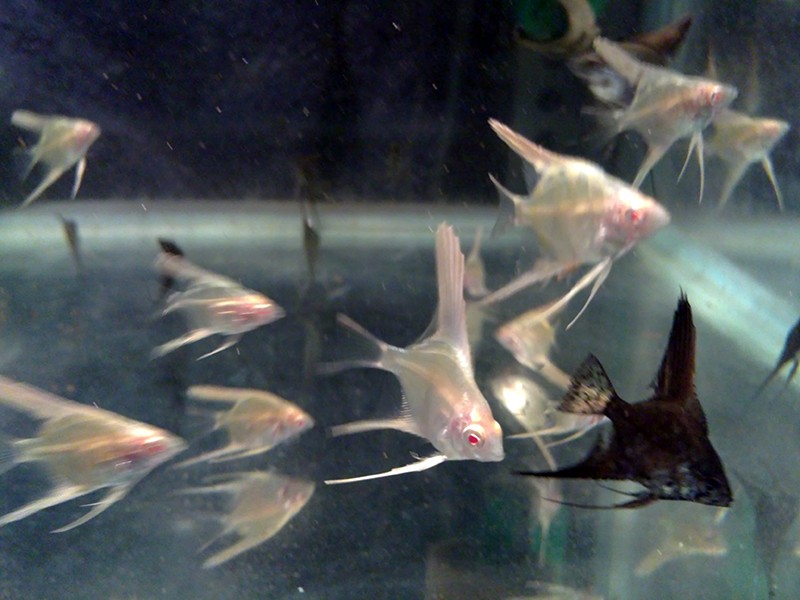 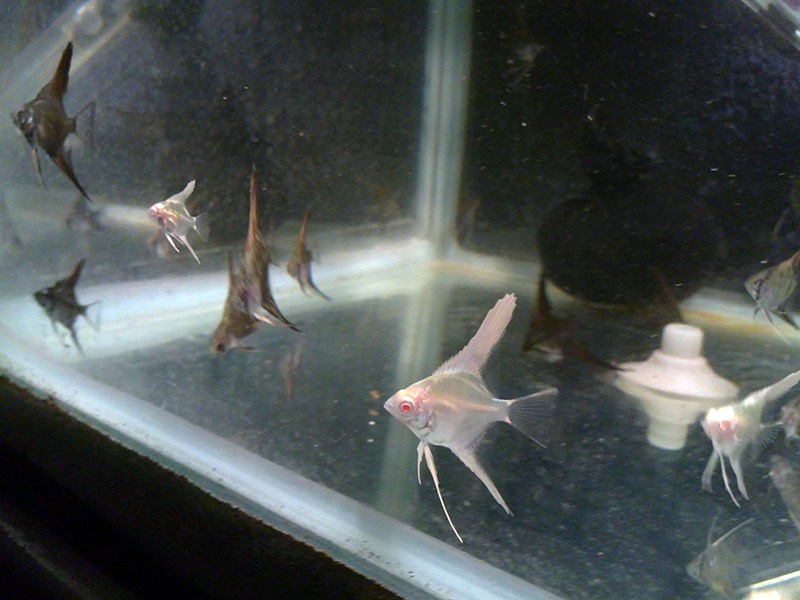 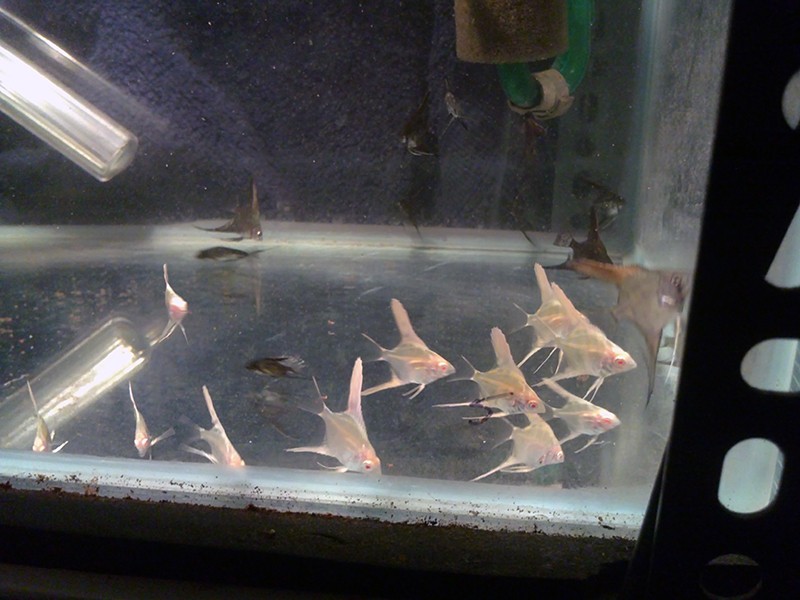 These pics were taken at beginning of month so will get some more shortly to see how/if they are colouring up like KK blue albino.

Thanks to Karl, Grummie & Tom who the gratitute should really go to, these fish will be absolute gems and this post is really to silence the doubters and fishkeepers that think they know what they are talking about when really don't. Hard work and comittment pays off. Hope to have more of these on the go soon but very small numbers are produced compared to healthier sibliings. I am allways learning as every fishkeeper should bear in mind, never overlook a step.

That pinoy is gorgeous. Sorry, I'm still not sure if I like albinos, but I can see that yours are lovely fish to someone who does like them. The eyes freak me out I'm afraid.

Stunning & fantastic work all round

, looking forward to seeing them grow

They're looking beautiful Jimmy!! Did you use anything special as a first food for the albinos? You've got nice even growth and great finnage already! I've just got my first albino babies, they seemed to be the last to go free swimming and are finding it hard to grab food (some are ok). I'm using a mix of microworm and brine shrimp but was considering vinegar eels as a smaller addition.

Hi Jimmy, just a small point for clarification
You say you....

back crossed to get:

Do you mean you you did a sibling x sibling cross, or that you back crossed to one of the parents?

In the case of a sibling x sibling cross, you should get 25% albinos and of those 25% will be blues (homozygous for pb)

Did you use anything special as a first food for the albinos?

was rushing around last night, sorry for the confusion, I didn't fully disclose the genetics:

I crossed sibling to sibling:

I know I have definate gold in there as got platinum offspring and most likely to be problematic with true a/a - pb/pb. This should give a massive list of offspring, enter the phenotypes to:

I will get back on raising fry.

Hi Jimmy,
Thanks for the clarification, but looking more closely I am now confused on a couple of other points!...

1. The original male looks to be a pearlscale and you list him as being so, and the female definitely is, so in theory all their offspring should be too, yet the fish you picture as an offspring doesn't appear to be, and you seem unsure if the male sibling used in this latest pairing was a pearlscale. Could it be that the original male was only heterozygous for pearlscale.

2. In listing the sibling parents used, you don't mention the dark gene, yet some of the babies clearly have one.

A couple of other points of note

Your original albino female looks to me like it might be an albino gold, that would explain why both of the siblings used carry the gold gene, looking at the striations in her dorsal, I'm pretty confident she doesn't have a zebra gene, so the female sibling used can only be Z/+ (or Z/S if the albino female had a stripeless)

and I calculate that gives you 432 different genotypes in their offspring!

Looking forward to the updates

These pics were taken at beginning of month so will get some more shortly to see how/if they are colouring up like KK blue albino.

I will get back on raising fry.

Once again, great work and congratulations.

, I did have one Dark of the original offspring however very slow growing just coming into maturity, I don't think the D/+ will have any impact upon the albino trait due to lack of colour production and hence shyed away from it. I have been more concentrating on KK.

Also please disregard other dark offspring in the pic as these are off another line -something alse I will be disclosing shortly - non albino related.

In terms of the pearlscale yes this has confused me too, Grummie may be able to shed some light. The male (pinoy) and female (albino) parents are definately pearlscale however I have seen some super pearlscale's before and therefore is it possible to be just +/p (pinoy).

The genetics provided are an accurate representation of the sibling cross and the fry prodcued. I will take pics of parents to see if we can further break this down.

That explains it, I was assuming they were siblings!

I have seen some super pearlscale's before and therefore is it possible to be just +/p (pinoy).

In practice, it's often possible to see the difference between a fish that's heterozygous for pearlscale and one which doesn't carry the gene, I've put a little something on my site, click on varieties and then on pearlscale:-
http://www.helios.me.uk/Hatchery/hatcheryindex.htm

Like most traits, I suspect it's possible to select for fish that express the trait more, or less strongly, so my feeling is, that as long as you are confident of the parentage, that the pinoy must be heterozygous for pearlscale, but I wouldn't have guessed it from the photo.

Apparently there is a visual difference between albino pinoys and albino blues, albino pinoys being a deeper colour than non dark fish, but not having only seen photos, it's hard for me to describe.

The genetics provided are an accurate representation of the sibling cross and the fry prodcued. I will take pics of parents to see if we can further break this down.

the offspring are often more help than looking at the parents, so photos of them, especially the non albinos would help too.
_________________
Blessed are the cheesemakers!

These are the parents of the smokey pinoy that you have Jimmy.

I do not have the offspring count for this cross so I'm not sure if anything 'strange' happened with the pearlscale, I must admit it did surprise me though. I put the albino gene there because Ken thought it may be present, I know it's in the paraiba types from him.

something definately strange going on with the pearlscaling then as the male I used pictured below appears to be het for p. Hes got a patch to side due to me using slate, will have to move to pipe. 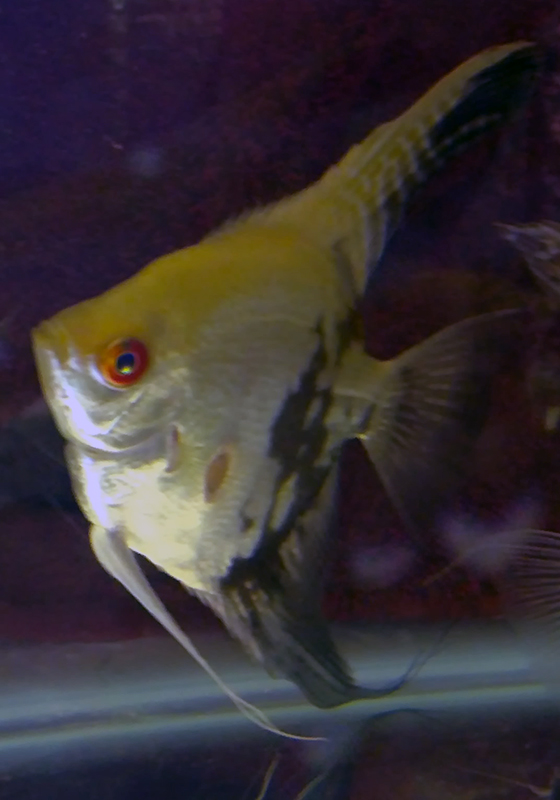 Here are some pics of his fellow brothers and sis that I sold to another fishkeeper a while back as I had limited space. Still around though! you will see pic 1 is het for p and pic 2 is homo for p. Looking again at the father pinoy I think he has to be het but really well pronounced or you don't get an exact 100% p/p when crossing p/p with p/p - strange but definately happening here! 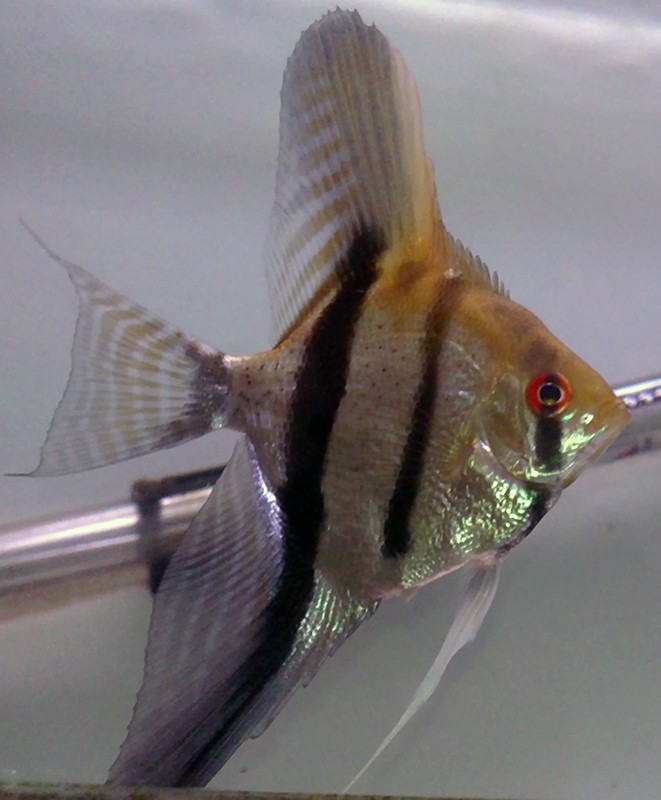 you have to click on this image to see the male smokey to the right. 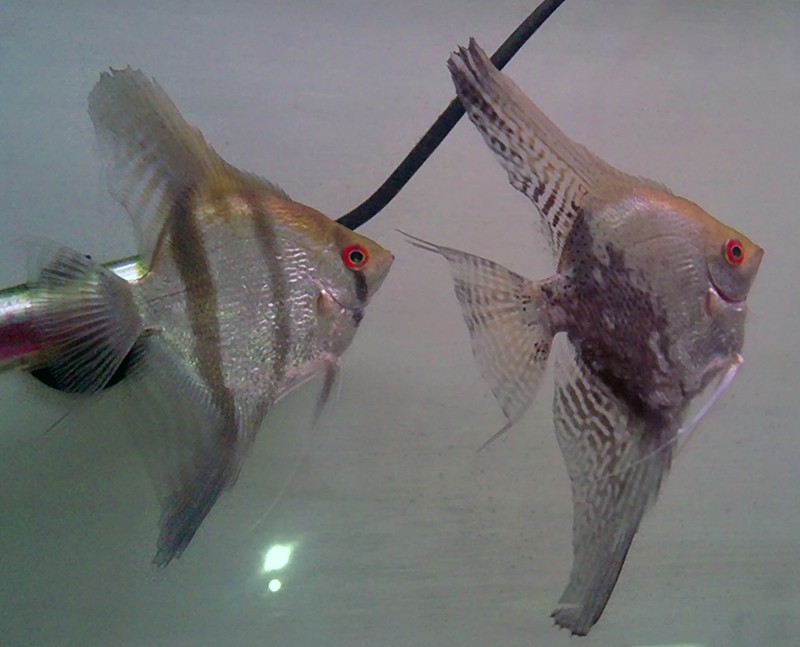 I've got another batch on the go so will be able to provide pictures and a more detailed acount of raising the fry.

Hi Jimmy,
I think we must conclude that that the pinoy you got from Graham was only heterozygous for pearlscale, so some of his offspring would also only be heterozygous.
_________________
Blessed are the cheesemakers!

The pinoy dad looks like the pearlscale is only showing on the bottom half of his body. Is this the way het pearlscale expresses sometimes?

Hi folks here are some updated pics, i used a dimmed flourescent light to photograph as if the light is too bright the colour is very hard to capture. As far as I can see I have some ?ghosts and zebras, unsure if there is smokey in there?? 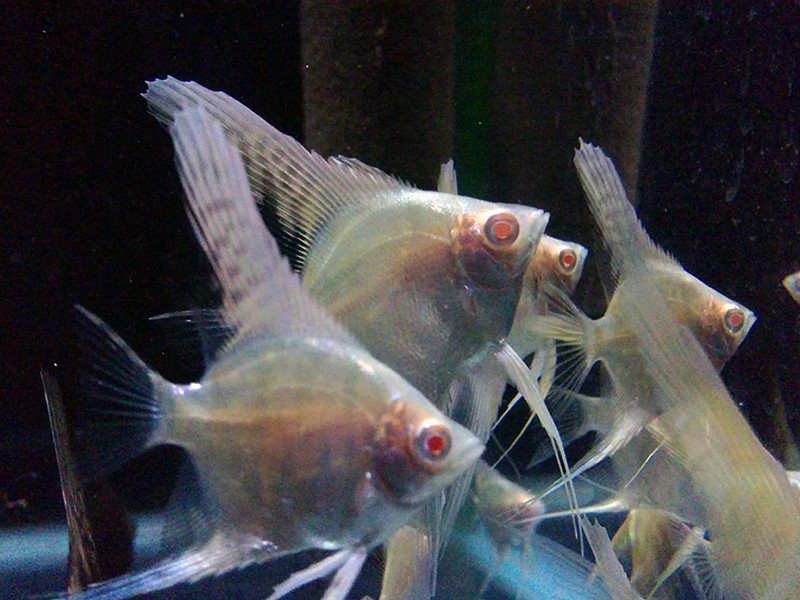 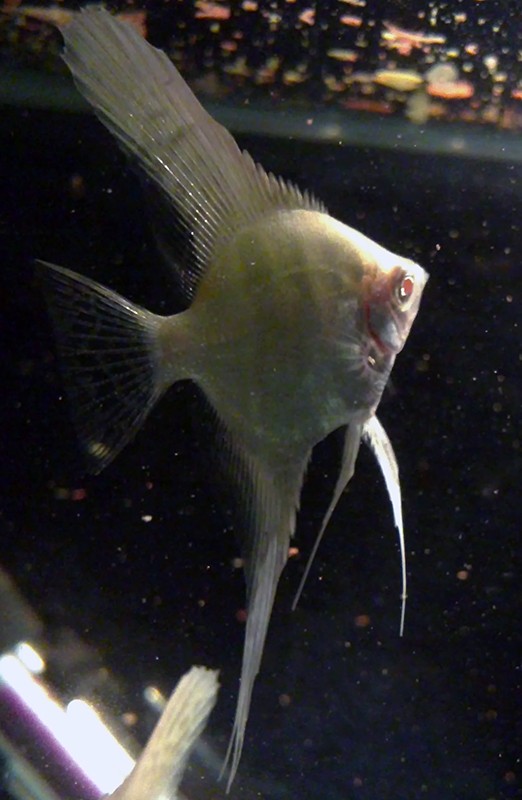 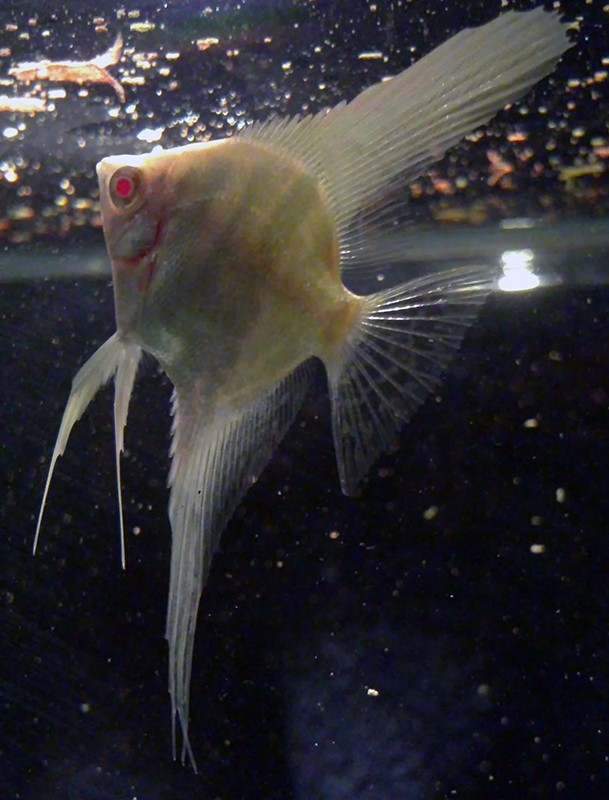 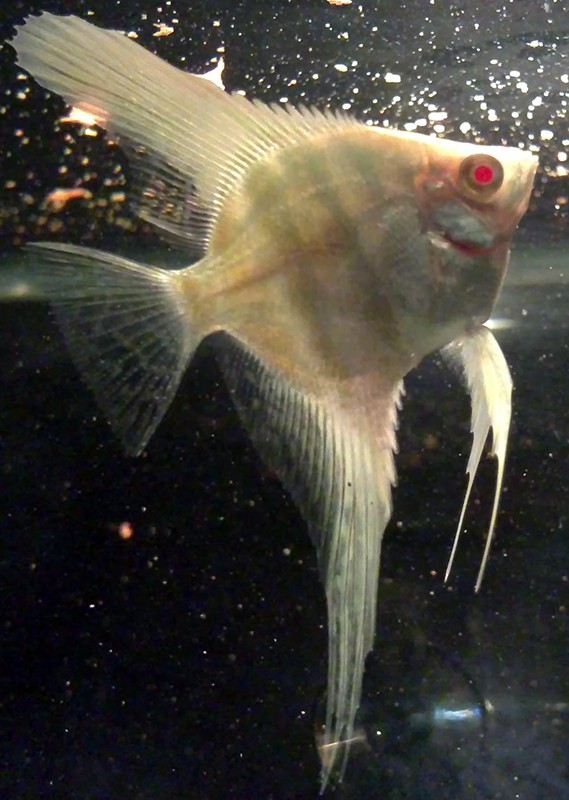 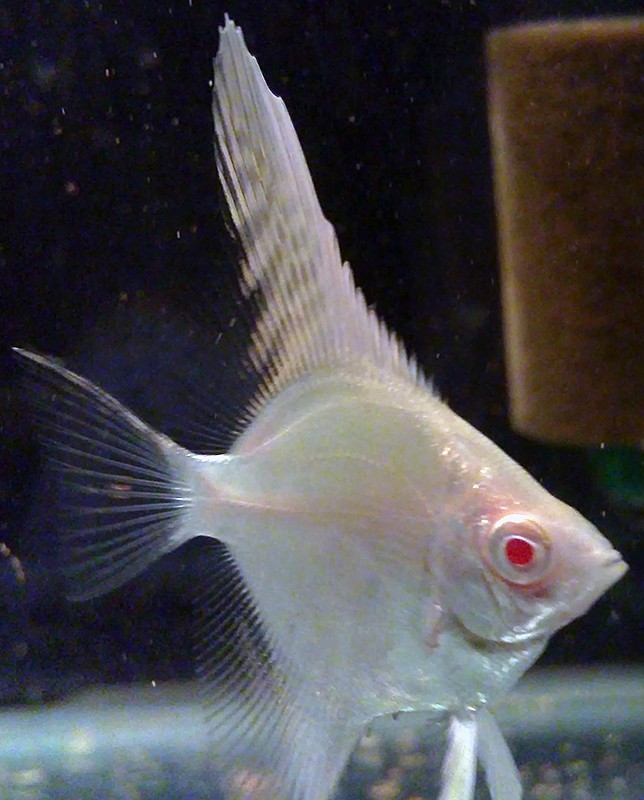 Thanks, took me a while to get some good pics! they are feeding great and i'm doing 50% water changes every day, well worth it. The ?ghost in the last photo is one of my favourites, but all round the finnage is looking super.

Trying to get more broods on the go, i've finished up uni for the summer so will have more time to get another couple of broods up and running as a lot of time has to be invested separating the fry and getting them eating. I have found big water changes, good feeding and pristine conditions are key.

Have any of you guys had much success in geting some albino broods on the go? will be interesting to see what other types of albinos are out there?

I'm hoping the zebras pictured will turn out like:

I must admit, although I'm not keen on albinos, the blue is a definite plus. I do hope they turn out like the u-tube fish. The fins on the pic 3 fish are lovely btw.

More pics for you guys

Some pics turned out better than others hope to get some better quality ones, they are looking good I have to say: 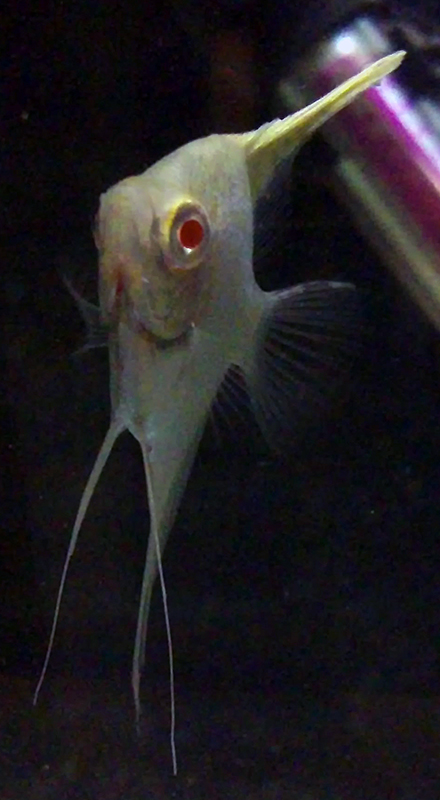 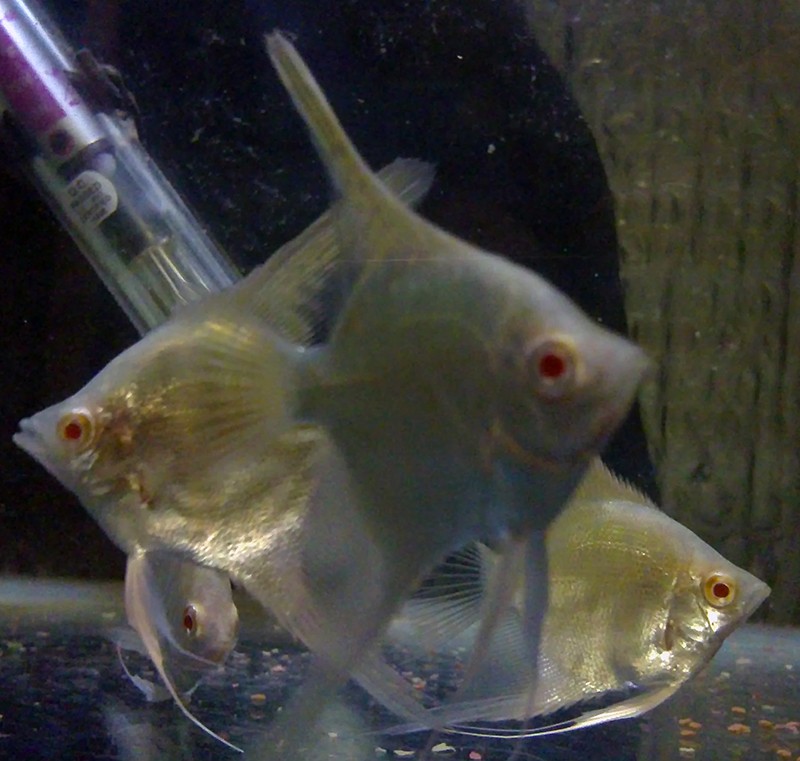 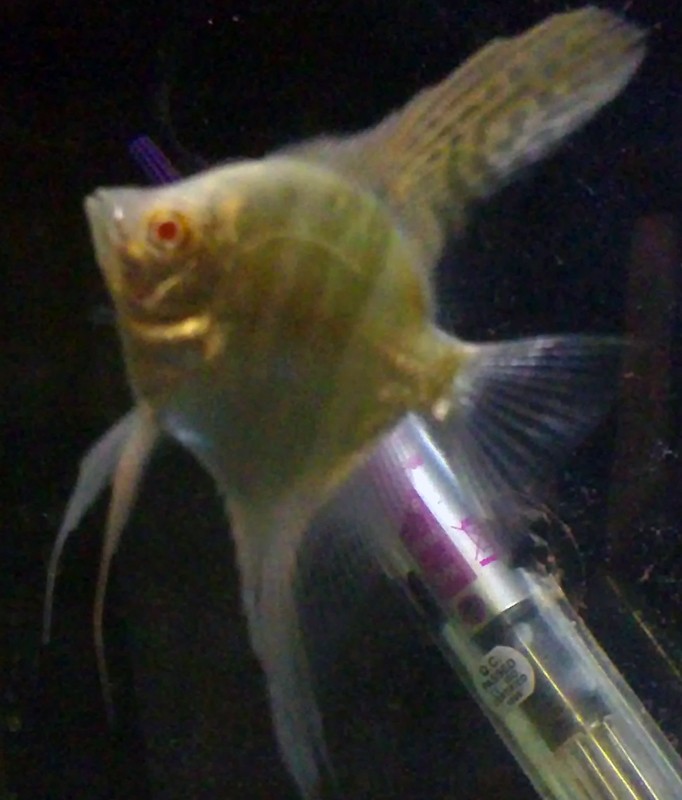 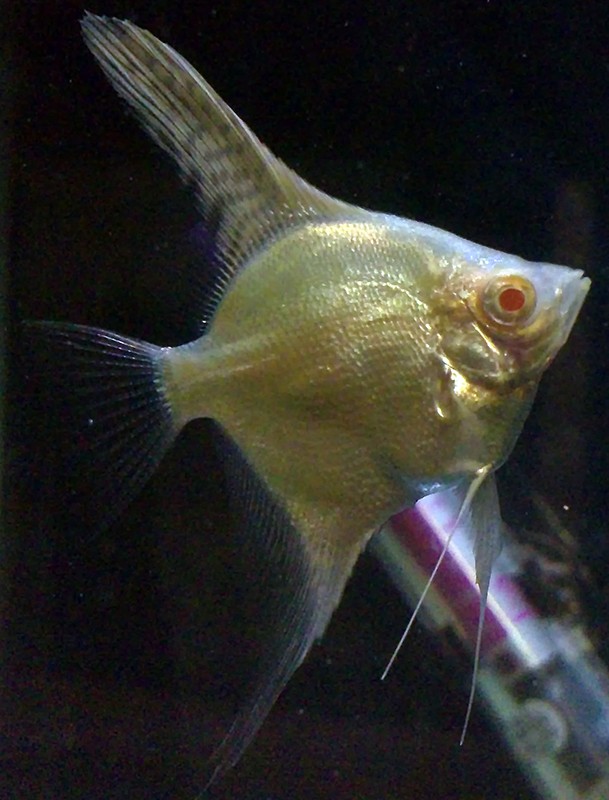 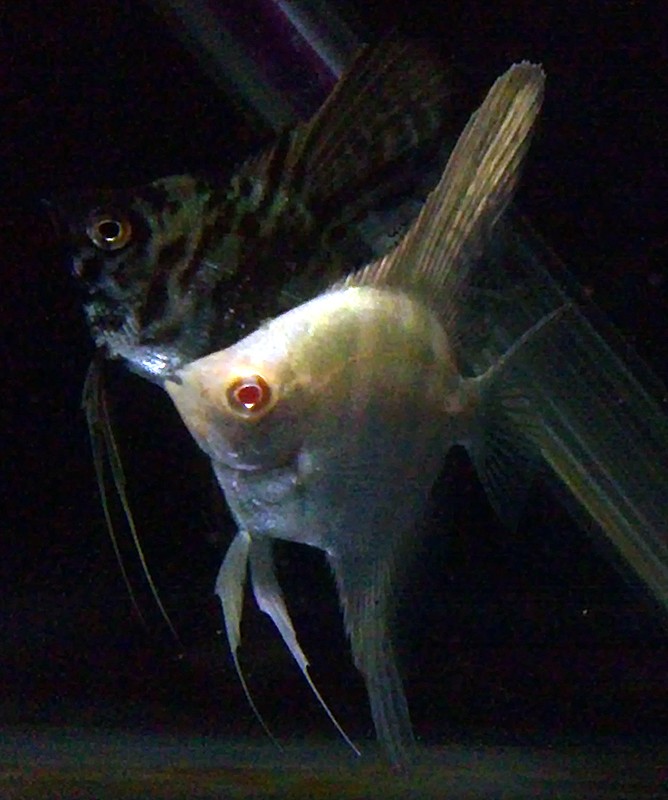 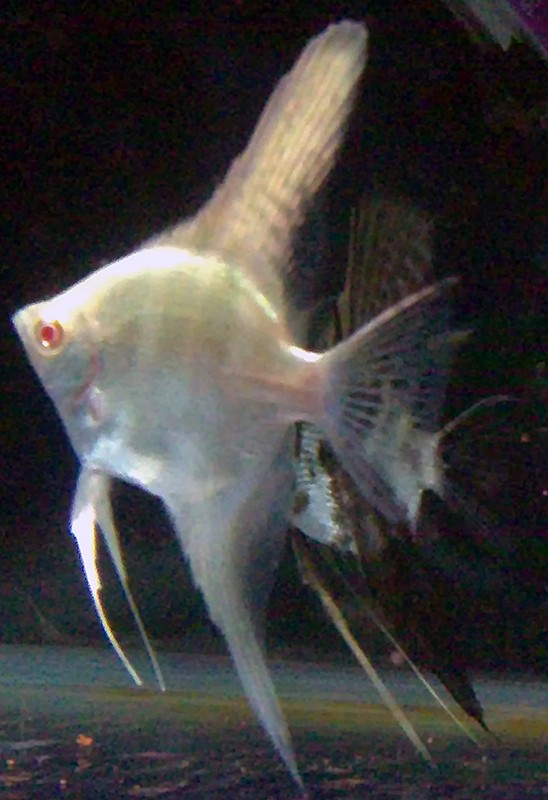 Hi Rob, can you please post the photo of the glitter albinos you brought in from Czec?

Hi Jimmy
Very good looking young fish, They will make some interresting breeding stock when fully grown.
I am myself playing with six pairs of red eyed albinos crossing them with some of my veil tailed
double blue marbles, Lets hope we all get some nice results.
Cheers Tony

yeah mate definately, beautifull fish! you should start another post so we can compare traits, what dya think? or moderators we could start a sub heading of breeding called albino for us to catalogue the work we are collectively doing?