Hi everyone, sorry I've not been around recently. Had a lot on and nothing really to share regarding my angelfish ... until the last couple of weeks.

My male has started to get a really huge stomach. He's really swollen up - although his scales still sit flat at the moment, no pineconing yet.

I've cut feeding from twice a day to once a day. He's still eating and still getting bigger.

The swelling seems reasonably even both sides.

He's still courting my female though they still havn't bred - it'll be more than a year now since they last bred.

He does seem to be sitting a little more 'nose up' than I'd like which might suggest a belly ache.

I've tried feeding peas but he won't eat them. I have seen him poo but that was last week and he didn't pass very much.

I tried dunking a frozen block of artemia in some epsom salt water and then feeding the block but this didn't do much. As of tomorrow I'll dunk their food daily for a week and see if that makes any difference.

Nothing new has been added. No change in food. I there are no other outward signs. I don't suspect Hexamita although I'm aware it could be. The only other thing could be a tumor ... this is what I'm most concerned of. If it's a tumor I'm gonna lose him and that means a female alone which I can't allow. If I lose the male I'll be looking to sell my female on

Any help or advice would be good 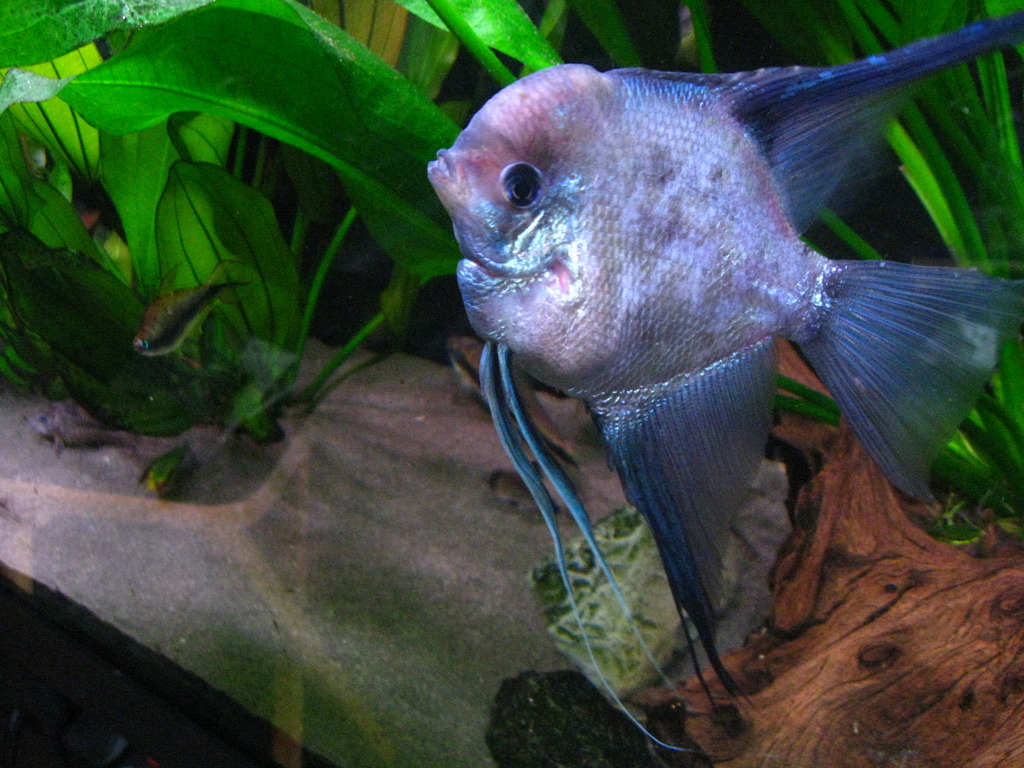 Some angels do seem to develop a middle aged spread, but in a case like this I'd always assume the worst (hexamita) and treat for that, followed by a course of wormer and if neither shifts it, only then assume that he's simply podgy.
I use Octozin for Hex. combined with daily gravel cleans and absolutely no food.If it is hex. and he continues to feed the gut could rupture, and that's what usually does for them.
good luck with him.

problem I have is that he's in a community tank and he's so big I have nowhere to move him to so not feeding is problematic. I have Octozin in stock so I'd have treat the whole tank.

I did consider worming him but as there's nothing new been added and I don't use live foods I can't figure where he would have got worms from.

I have had Hex before in my tank so I'll treat the same as I did before. Back then I lost both my Bolivian rams and two baby angels and I can't lose any more to Hex ... it's horrible

Thanks very much Rob

it's not looking great for this angelfish and I'm very worried.

He's spending more time isolating himself or just sitting in a corner with my female. Neither angel has eaten in 2 days (which is a good thing as you said not to feed but the other community fish still need to eat something)

Keep your fingers crossed, the fact that he's still alive several days after first showing symptoms is a good sign.
_________________
Blessed are the cheesemakers!

he has started moving around the tank again in the last hour or so. He's coming back to the front when I go near the tank - which he's not done in the last couple of days.

I've taken more photo's of his bulging belly which I'm about to upload. That way I can compare it's size

taken a couple of hours ago 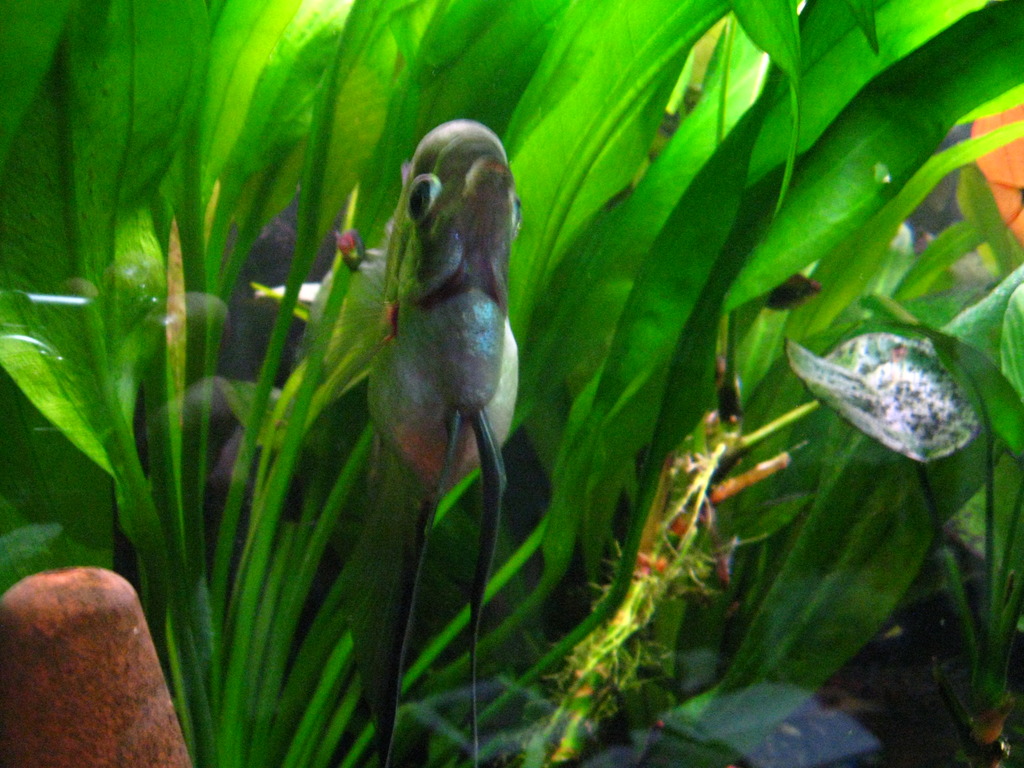 yeah, he's pretty bad. I've not seen him poo though so I am wondering whether he's severely constipated aswell .... maybe more than one thing going on?

If I can get him to eat some epsom salt dipped food I might be able to get him poo-ing and that might ease some of his discomfort.

I defrosted some bloodworms in epsom salt water and managed to get my angel to eat some. Hopefully if he is constipated the salt will get his bowls moving. He does seem a bit brighter tonight so maybe the anti-biotics are working.

I tend to do a 4 rather than 3 day course with octozin, after that I'd start with the wormer sooner rather than later, you have to be careful mixing chemicals, but in general octozin doesn't seem to conflict with any of the wormers I've used.
_________________
Blessed are the cheesemakers!

I have enough octozin left to run an extra day so that's what I'll do - I'm determined not to lose my boy if I can help it.

I've never wormed before so can you recommend a good worming product and should I add it straight after the 4 days of octozin or should I do a large water change then add? The tank is due a water change but obviously I can't do it with a treatment running

It may be my eyes but the swelling looks a bit smaller today ... he's not eaten today (but that's a good thing) but he seems a bit more alert.

The plan is to leave the tank for 48 hours then do a 50% water change. This will give me time to get a wormer. Once I've done the water change I'll add the wormer and take it from there.

Let me know Rob if you think I should change that plan.

Still waiting for him to poo ... he's either doing it during lights out somewhere unseen or he's not passing anything yet

no change in my boy ... he's still massively swollen but not getting any bigger which I'm hoping is a good sign. I've got a wormer today from my lfs. It's one by NTLabs and I've had good results from this brand in the past so I'm still hoping for a cure.

I did a 50% water change about an hour ago and I'm aiming to add the wormer tomorrow ... possibly need to find my nerite snail first - not had chance to check if this med is okay with snails or not yet.

What's next if the wormer doesn't fix this swelling? Do I accept he's either massively fat or got some kind of tumour?

Yes it is toxic to snails, so best to find the nerite.
What next, put him on a bit of a diet & keep a close eye on him, unless you're prepared to pay for a vet to x-ray him, and even then there's no guarantee that would reveal the problem.
_________________
Blessed are the cheesemakers!

thank you. I've noticed tonight that he's actually looking swollen all over. His over-sized nuchal hump and chest look more exaggerated and even his eyes look bigger ... not to the point of me thinking about him having pop-eye (definitely not that) he's just taking on a swollen appearance all over.

He's still not eating so no worries there, he is still courting my female though. I admit to being confused

If he's looking generally swollen that could be some sort of internal bacterial issue such as septicemia, and I'd probably treat with Esha 2000 or something similar.
_________________
Blessed are the cheesemakers!

I'm desperate to save my boy and I'm willing to try anything to stop him from dying. If you want to see another photo I can do that

I think I'd try the ESHA first, espically if the eyes are bulging.
I'm assuming you've checked water quality (in particular pH & nitrates) but if not, do so before adding any treatments.
_________________
Blessed are the cheesemakers!

I have been having problems with my pH dropping to 4.5 which is why I've increased my water changes from 30% to 50%.

OK, don't worry about treating, get the pH up, that's almost certainly why he's bloating.
Check your kH which is almost certainly low too. Go back over the conversation we had a year or so about kH/ph and see if you can bring yourself to considering adding some kH buffer to the water.
_________________
Blessed are the cheesemakers!

I've tried to keep my pH up but with a gH and kH of zero it's impossible. I'll be moving home soon (which is going to mean a brand new set up) and I'll be going back to using the same substrate I used when I first started out as I didn't see pH problems arising until I switched to sand

I'm running crushed coral in my filters and I've looked into re-mineralizing products but I don't understand how to use them. I have been considering changing water more than twice a week in an effort to keep it up.

I changed 50% of the water yesterday and I'll aim to change some more over the weekend and re-test the pH and see if I can get it nearer to 7 (tap is about 7.4) 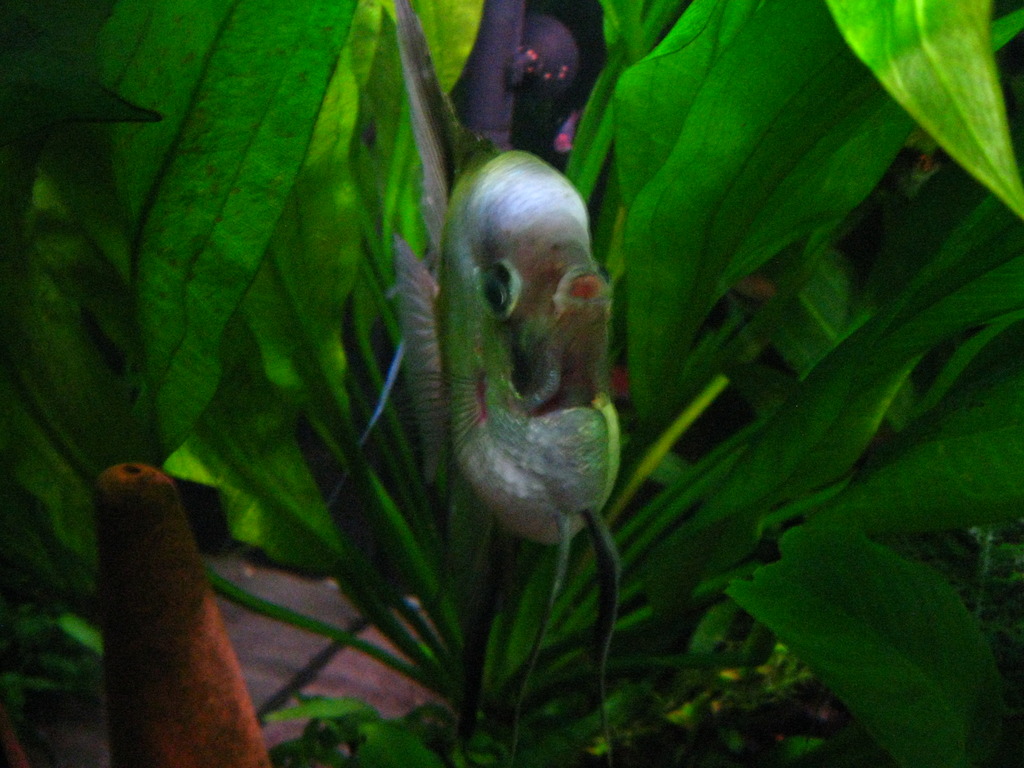 he now in the throws of dying. He was looking a bit better this morning too. He's currently face down in the sand, still alive but clearly he's gone beyond help. Problem is the female is glued to him. She appears to be guarding him. It's very sad to watch

Do I disregard her, net him and put him to sleep or for her sake do I leave him and let nature take it's course. I'm horribly upset