Lizkel31 wrote:wish i had the room and the tanks to separate them as well

I've just separated some of mine, there were too many pairs in a tank. You can see how I've got things set up here:

Now... you wouldn't want that in your front room!

my breeding Angel fish have young and have laid more eggs

Hi the 2 breeding Angelfish i have with baby Angels have laid more eggs is this normal ? will they kill the babies they already have to protect the new eggs they have laid

my baby Angel Fish are getting big 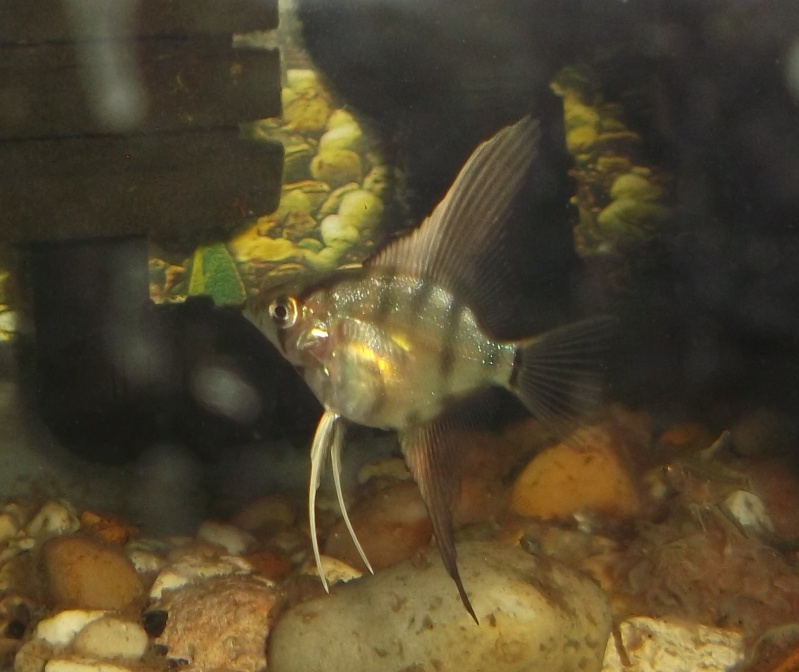 this is one of the babies and its got the stripes

my baby Angel fish are getting big 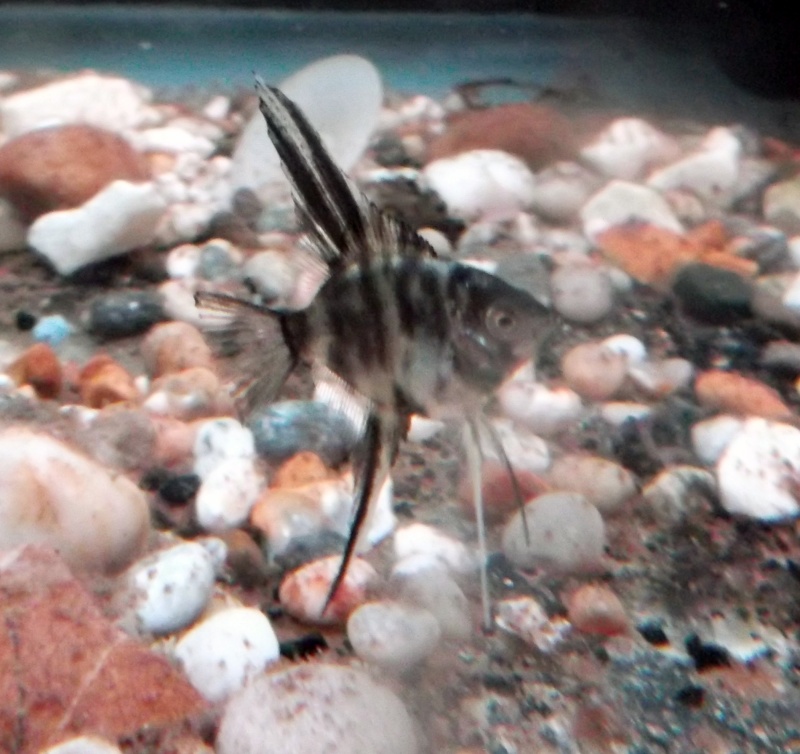 more of my Angel fish 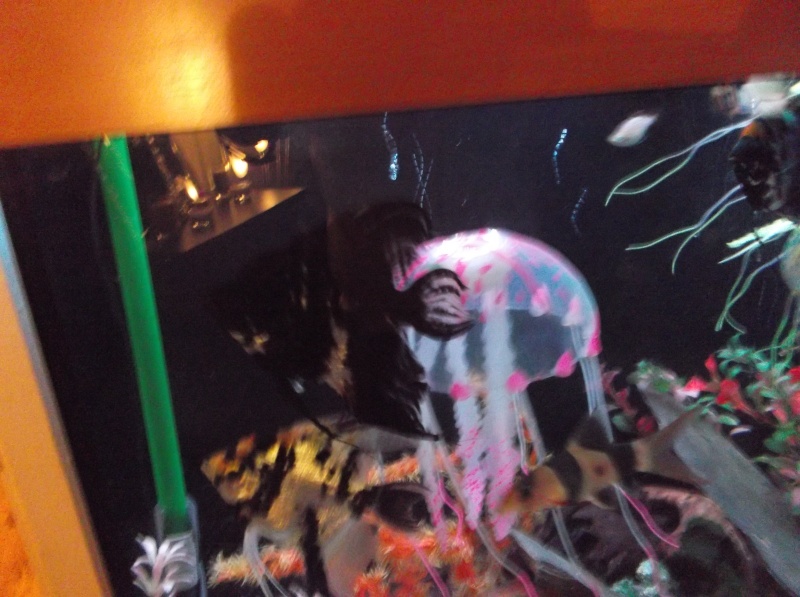 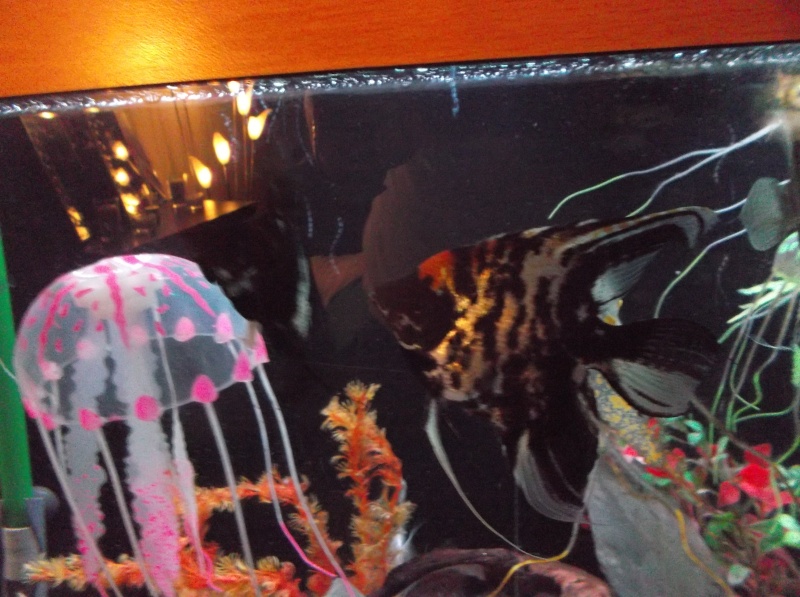 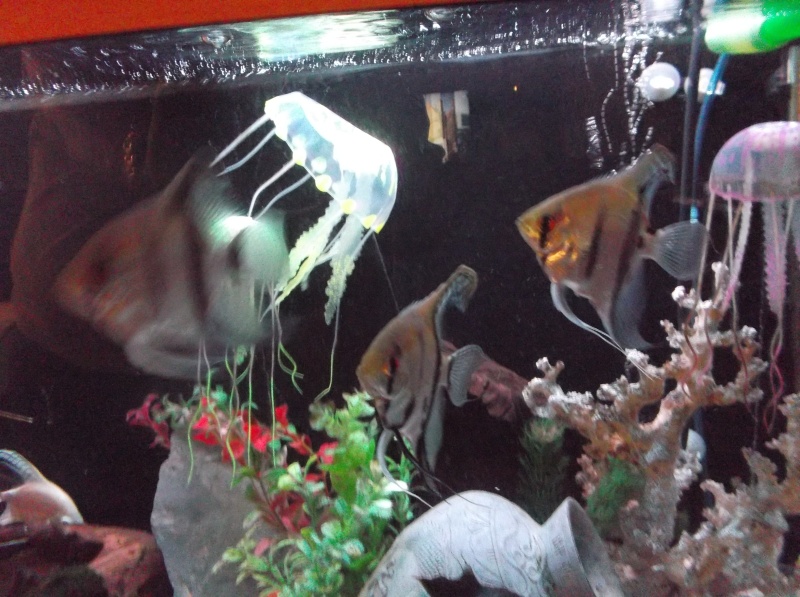 heres some of my other Angel fish in my other tank

They're coming on well, well done!

The body shape should 'round up' a bit more as they get older. If you continue to look after them well, they should keep their lovely straight fins as adults too.

I see you've got a thing for angelfish... and jellyfish!

Also, are you able to estimate how many 'types' of fish which came from that spawn? and do you know their rough numbers? were half like this, and the other half like that. Or does there look to be 3 or 4 types etc? That information should give us an idea of what the parents are. Do any have pink gill plates etc?

i have the parents there pictures are furture up in this post there in a seperate tank with  the babies.and the babies are either the ones with the stipe like one parent or black and silver like the other parent , out of all the eggs laid i have about 15  babys survived im pleased with that

Not bad, it's all good experience. Are you trying for more next time 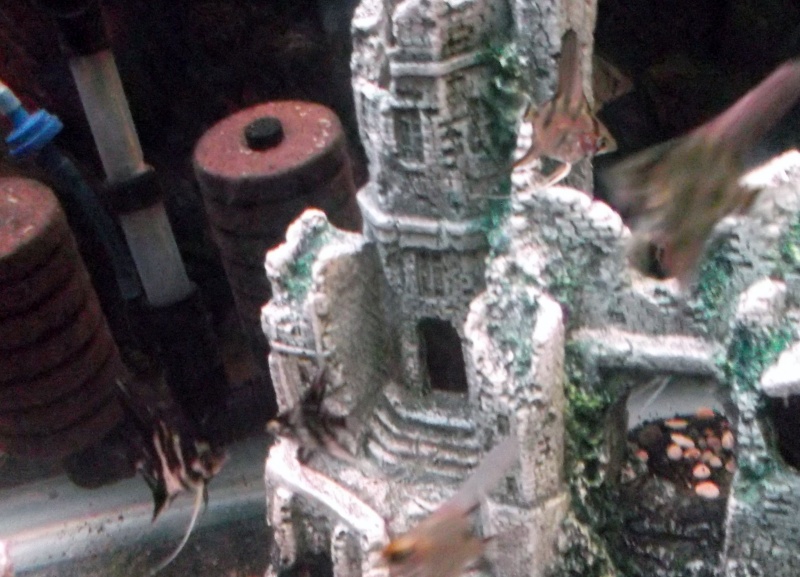 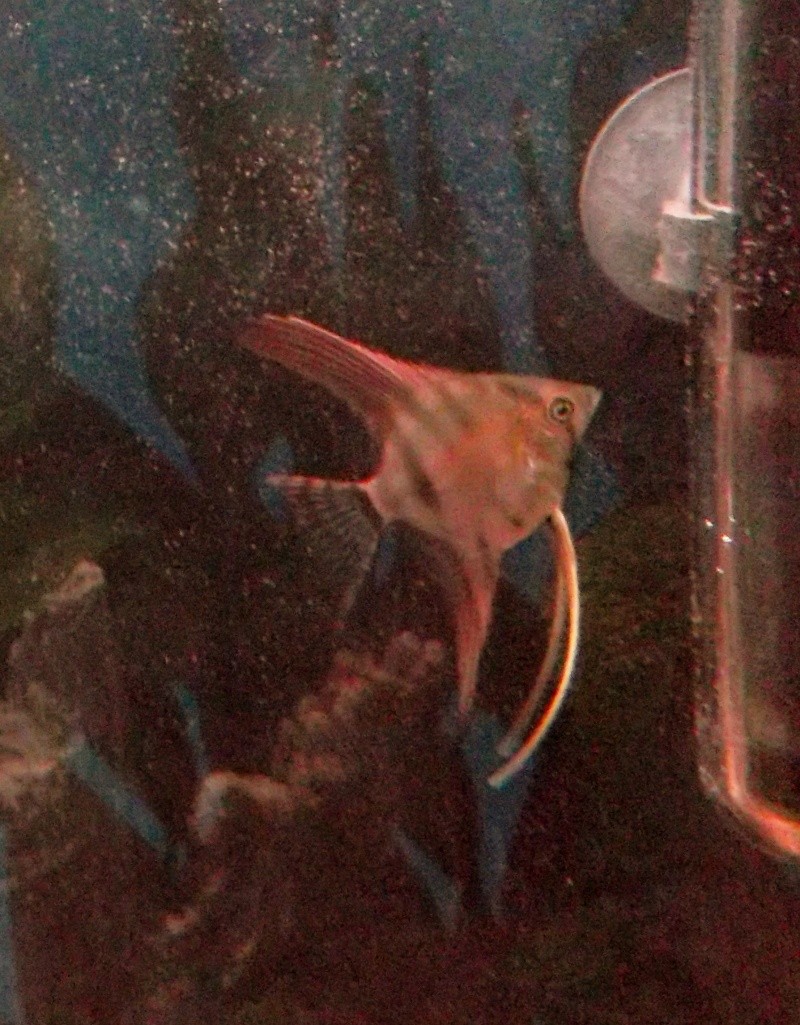 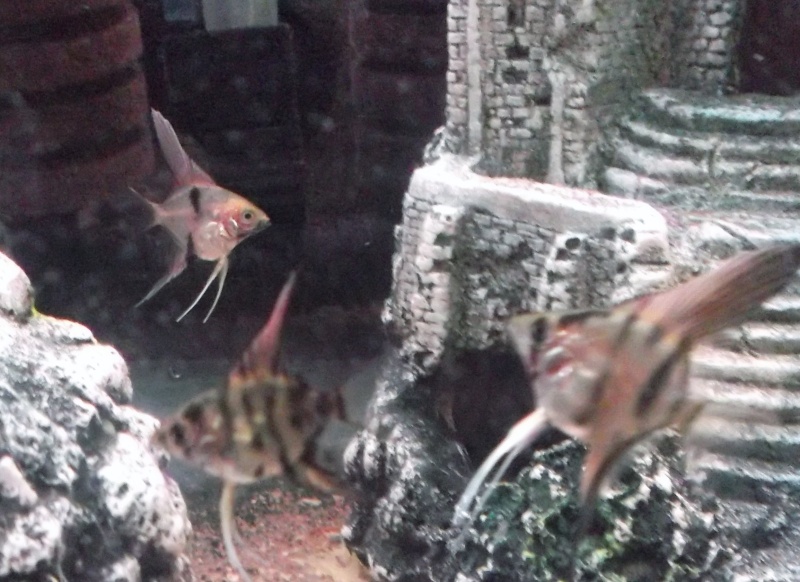 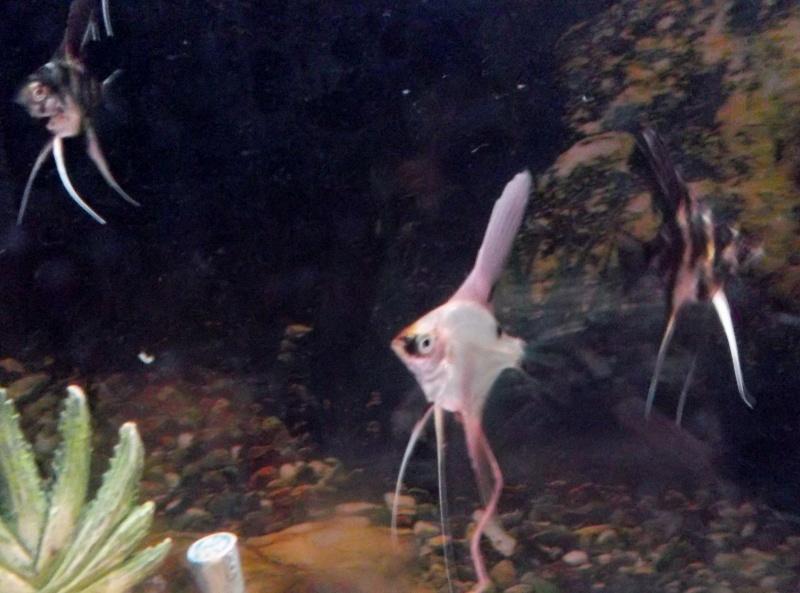 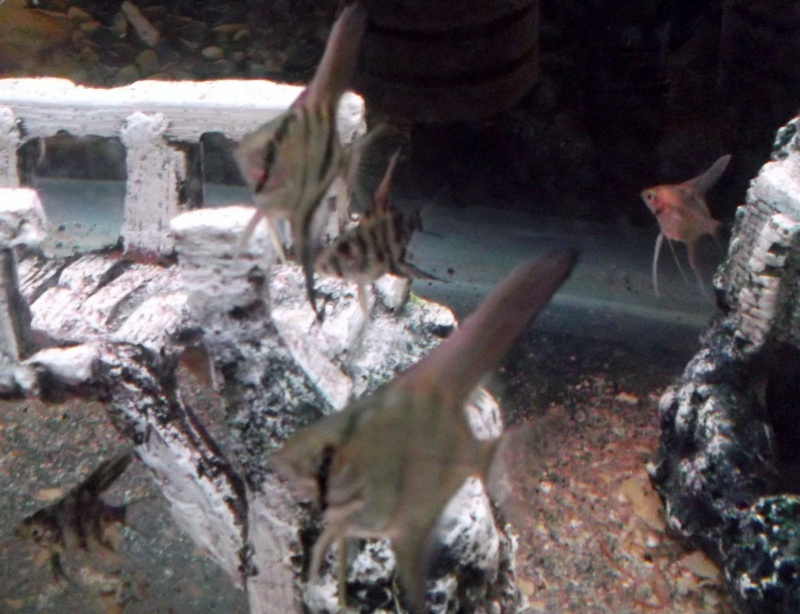 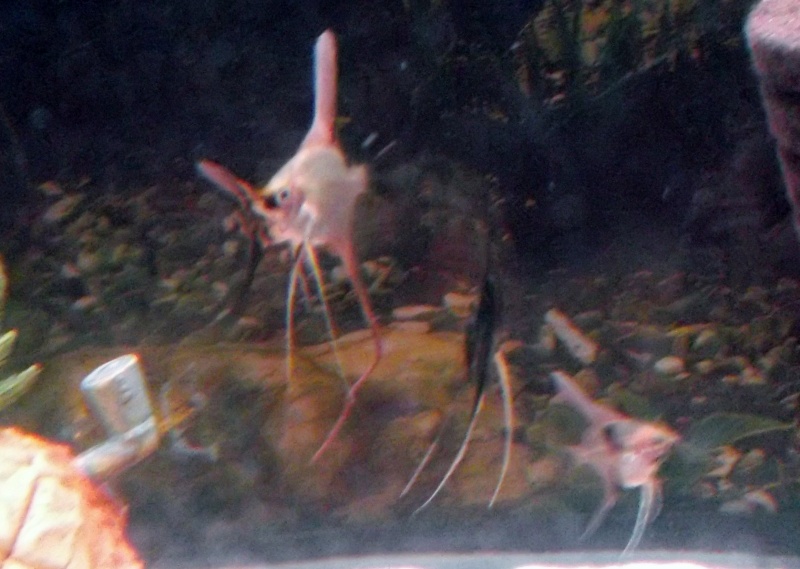 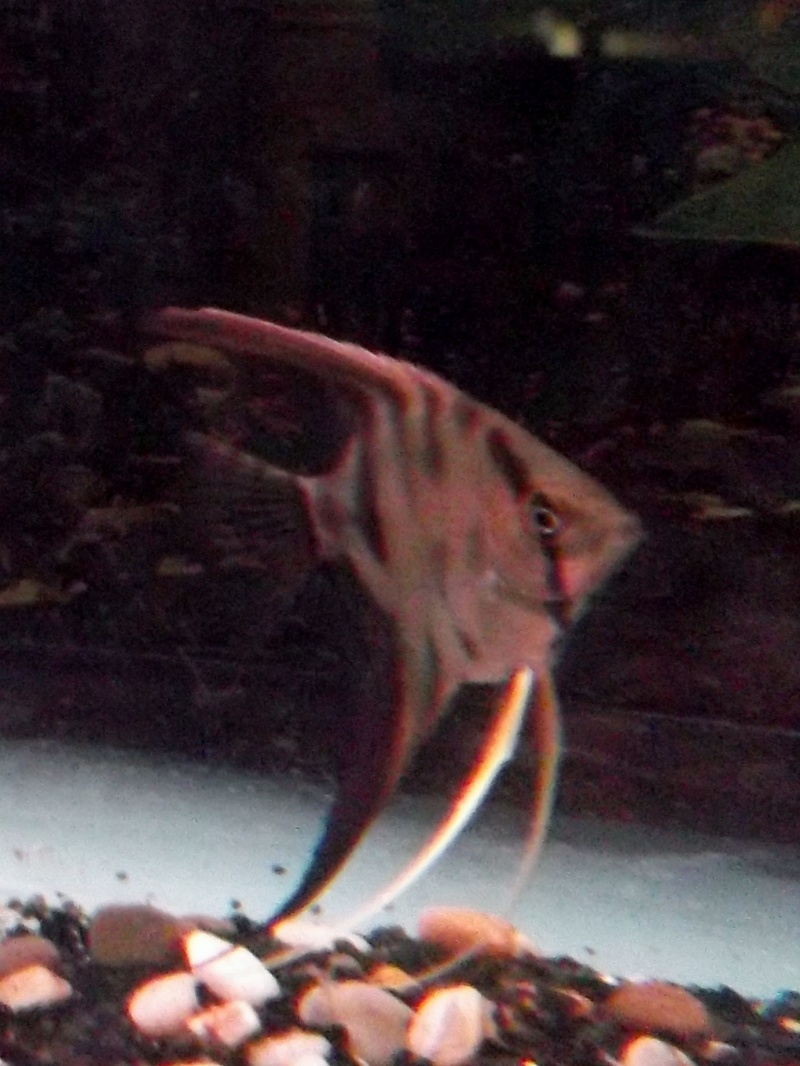 Ok, assuming those are all from the original pair that started this thread we can tell a lot more about the parents now!

That means that Dad isn't a koi, but rather a Marble blushing with a gold marble gene, these are sometimes called "orange marbles".

This means you should have four different types of offspring in roughly similar quantities :-

M/+ - S/+ = marble ghost - these should be silver with quite light marbling (the fish bottom left in photo 3 would be typical)
M/g - S/+ = also marble ghost, but the gold gene will produce much darker marbling (the fish left & right in photo 4 are typical)
Gm/+ - S/+ = Silver gold marble ghost, these will have very little in the way of marbling, even less than the M/+ - S/+ marbles, but like them they will have silver bodies. (the fish in the second photo, and on the right of the third photo are typical)
Gm/g - S/+ = gold marble ghosts, like the silver gold marbles, but with a gold/white rather than silver base colour. The fish in the middle of the 4th photo is going to develop into a fine example of the type.
_________________
Blessed are the cheesemakers!

Thanks for your reply and the information ,yes these are all from the 2 adults that i opened the post on, so does that mean the adult Angels are not wild Angel fish ? do you think the adults are from  different types of Angels that have been breed ? so if i seem stupid but i am still trying to understand the breeding strains (if i got that right ) what i mean is that they havent been inbreed if you know what i mean

The mother is a silver angel, all wild angels have a similar pattern to her, but the fact that she's carrying a gold gene means that she's not a wild caught fish. The male carries several domestic mutations not seen in the wild. The vast majority of of angels sold in the UK are farmed, wild fish are significantly more expensive and almost certainly will be sold as such.

Even if the parents are in bred, assuming that they're not related, which seems highly likely, given their genetic make up, then their offspring won't be.