Just a few pictures to show the progress of the brood from the k.k strain . Showing some good color and finnage. the fry that i thought were platinum now im not so sure of . Mybe someone can give some suggestions as to what they could be. 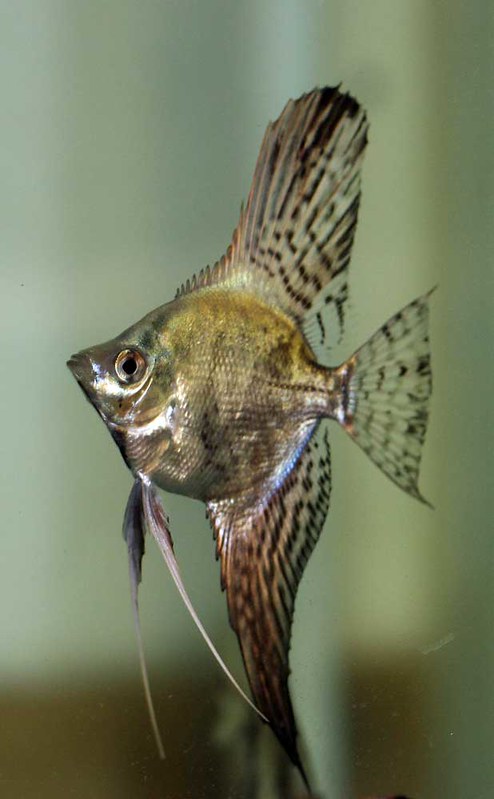 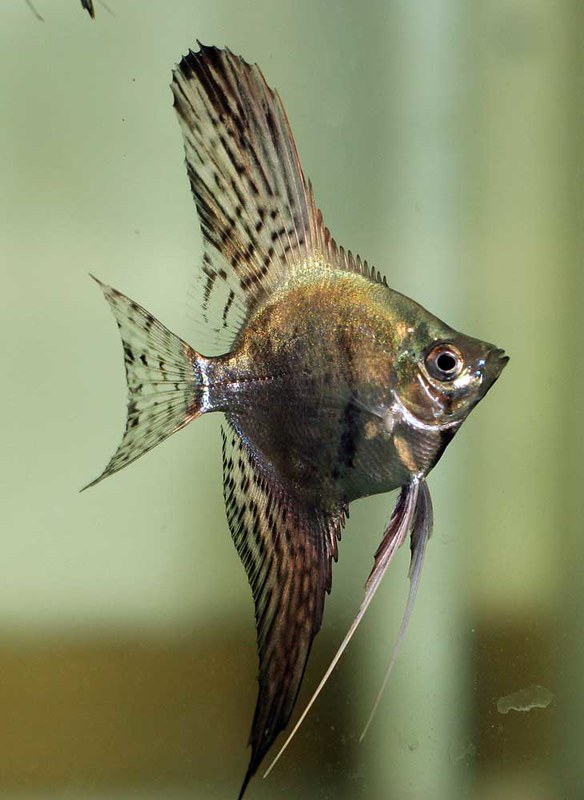 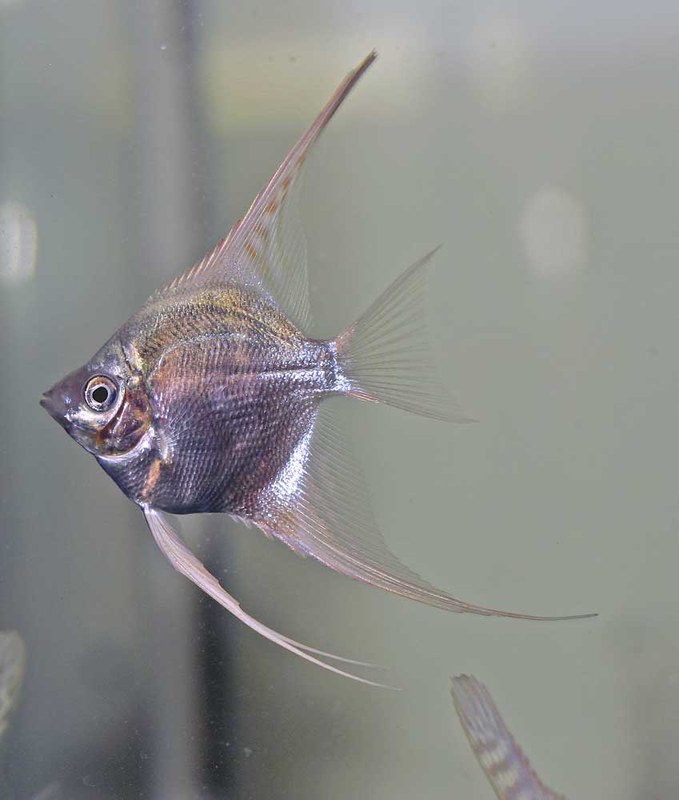 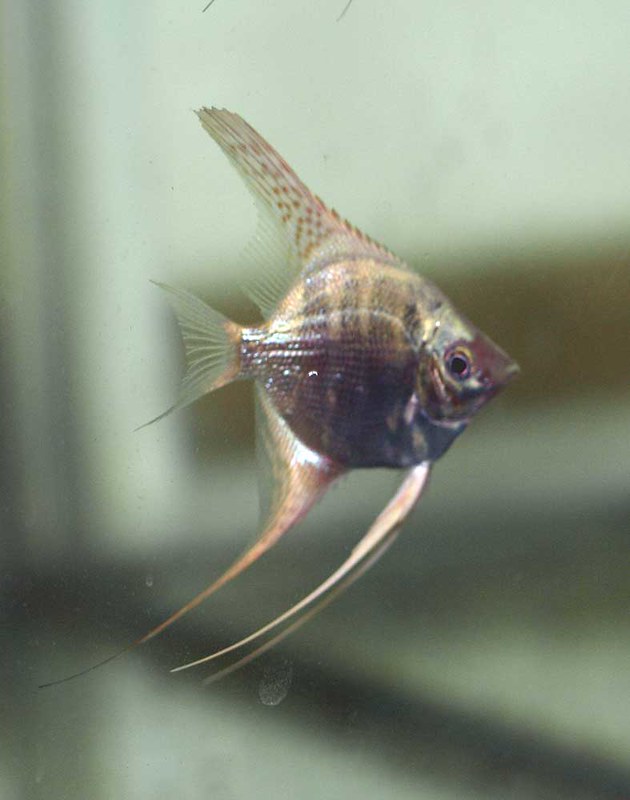 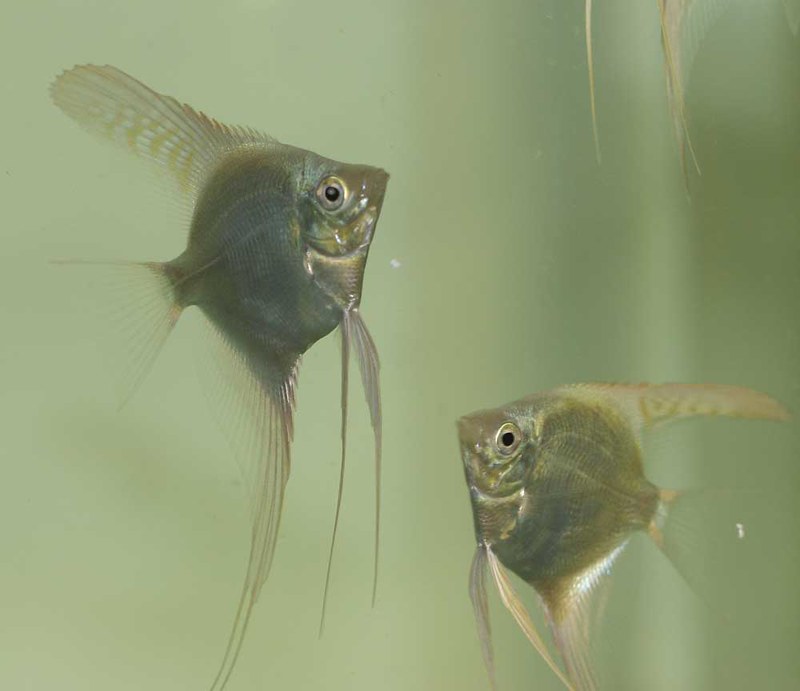 Hi Dave,
Those are coming on very nicely, and you have some interesting expression in the fourth photo.
looking at the photo of the parents in this thread :-
http://www.uk-angelfishforum.org.uk/t254-new-batch-of-young#2066

I know you find all these genetic abreviations a bit confusing so starting from the right hand end....
pb/pb - both fish are homozygous for the Philippine blue gene, so all their youngsters will be too.
p/p - similarily with pearlscale all the youngsters will be pearlscales too.
The other three loci are more complex, giving a total of 36 different combinations, but 25% will be g/g - */* - */* - p/p - pb/pb where * represents any of the potential genes. These will all be platinum pearlscales - good news for Fallon!
The other genes will have some effect on their appearence, but as they grow the platinums should all become fairly easy to destinguish.

Of the other 75% which aren't platinums you'll should expect roughly 1 in 16 blue ghosts, when these are younger they can look very similar to platinums, but the distinction becomes more obvious as they age.

If you look at the dorsal fins of the parent fish, you'll notice that the female has a number of very evenly placed horizontal blue striations (stripes) when you compare that to the dorsal of the male you'll see that his striations are closer together and broken into a more chaotic pattern - this is the give away sign that he has a zebra gene making him a blue leopard (a leopard is a fish with a zebra and a smokey gene)
Of the babies in today's photos, the fish in the first two photos is a blue leopard like dad, the fish in the 4th photo also has a zebra gene, although the dorsal pattern is just developing, I've seen enough to be confident.

At this stage I can't be sure about the fish in the third photo, the camera flash can cause strange effects, as can the pearlscale as it develops, but I think that might well be a blue ghost. (ie no smokey gene, one stripeless gene)
When golds/platinums are young, you can sometimes see a faint hint of where the bands would be if they didn't have the gold gene, in the fish in the fourth photo this is very obvious, you can clearly see it's zebra stripes, so not a smokey but a platinum zebra pearlscale.
The fish on the left of the fifth photo is a platinum which doesn't have a zebra gene, the one on the right looks like it's a platinum, but it's dorsal fin is not shown clearly enough for me to be sure if it does or doesn't have a zebra gene.

Thanks for the reply Rob
of the 25 "platinums" that i have from this brood there are about 10 that show the pale stripes of the Zebra gene. They are a very pretty fish and i am tempted to keep some back for myselfe. Will be interesting to see if the patterning remains visable through to adulthood. I hope so.
Dave

Will be interesting to see if the patterning remains visable through to adulthood.

Do you reckon the markings will fade on the platinums? I want pure platinum pearls, without gold or markings on them. Lovely looking fish though. 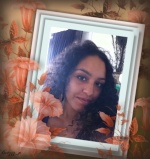 Do you reckon the markings will fade on the platinums? I want pure platinum pearls, without gold or markings on them.

This is a slightly older platinum with a zebra gene, like Dave's each of it's parents had a smokey gene, but as one was a blushing fish with two stripeless genes this fish is Z/S rather than Z/+, none the less, I'd expect Dave's fish in photos 4 & 5 to turn out something like this one, except that this one is only heterozygous for the pearlscale gene. His will be pearlscales! 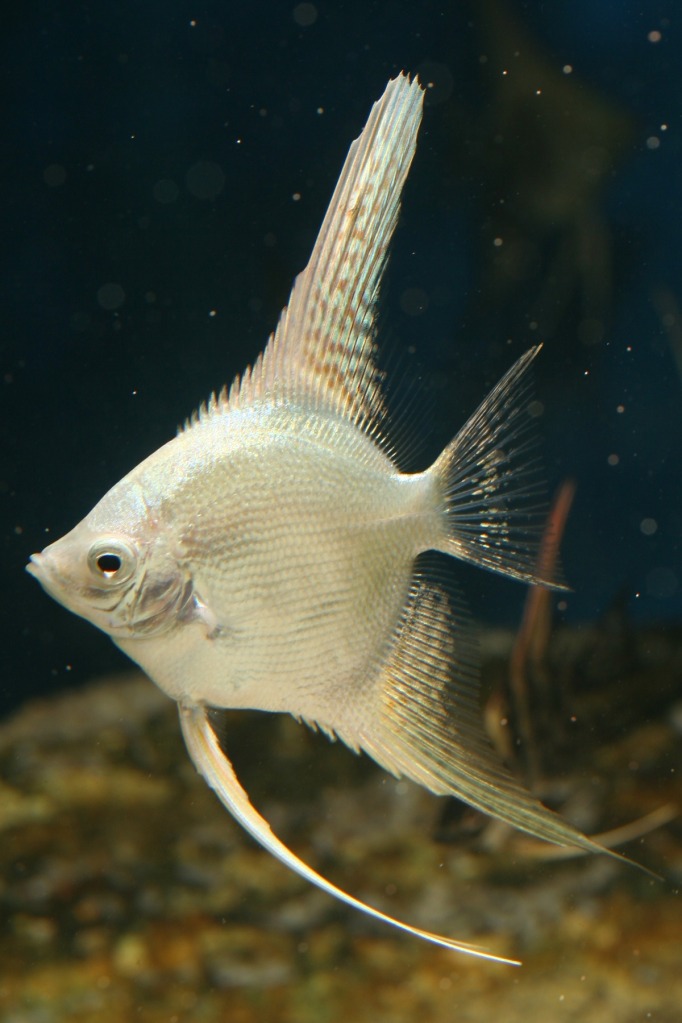 Are the first 2 photos the parents?

No mate
If you go to this post and read through it , iv put a picture of the parents on there.
http://www.uk-angelfishforum.org.uk/t254-new-batch-of-young#2066
Thanks Dave

, like platinum and blue. I'm addicted. I want at least one just like it. They really are beautiful. Hope you have lookalikes amongst the bunch. Save me one if you can once you can see what's what when they're bigger.