There are two recognised marble genes, Marble and Gold Marble, these are both alleles, in other words they are two different mutations of the same wild type gene. Other than the wild type gene there are two further mutations known for this locus, these are gold and dark. This gives 15 different possible combinations
D/D, D/M, D/Gm, D/g, D/+
M/M, M/Gm, M/g, M/+
Gm/Gm, Gm/g, Gm/+
g/g, +/g
+/+
Of these 9 involve at least one of the two marble genes, admitedly two of these involve a dark gene and would best be categorised as black, but that still leaves 7 different marble types. The situation becomes even more complex when other genes are factored in There are 6 different gene combinations at the stripeless locus S/S, S/+, +/+, Z/Z, Z/+, S/Z giving 42 possible different marble combinations even before the effect of genes like streaked and Philippine blue come into play!

None the less, back in the 1980's when Dr Joanne Norton carried out her work on angelfish genetics http://theangelfishsociety.org/articles/norton/dr_norton(14).htm and when I first started breeding angelfish, it was considered reasonably easy to destinguish between the different types...
Gold marble combinations (Gm/g and Gm/Gm) had a basic background colour of gold, especially on the head, trending to a lighter gold or white on the belly, randomly distributed on this background were a number of well defined, fixed black markings which didn't fade with the mood of the fish. In general, homozygous fish with two gold marble genes, would have more black markings than heterozygous Gm/g individuals.

Marble fish had more black markings on a background which was more silver in colour. Significantly the black marks could vary in intensity some appearing almost grey or brown, and the fish could alter the intensity of these marks depending on it's mood. As with gold marbles homozygous (M/M) fish had much more black on them than heterozygous (M/+) fish, indeed, some homozygous fish appeared almost black with just the odd patch of silver.

There was one further difference, marble fish usually had red eyes, gold marble fish didn't, on the rare occations that they did, it would be associated with a black patch coinciding with the eye.

Gm/+ were very distinctive, looking like normal silvers, but with a few random black patches.

The only area for potential confusion was between an M/g fish and a Gm/Gm fish. M/g marbles usually had more black than M/+ individuals but less than M/M individuals. There was also much more contrast between the black areas and the white areas, with little or no sign of grey or brown. Even so, back then I would have been confident in my ability to destinguishing between the two. The key was in the way the black was distributed, the patches of black on a gold marble were distinct and more evenly distributed than on the M/g fish.
Telling an M/g apart from an M/Gm was visually impossible, although as a rule M/Gm fish often had slightly more black than M/g ones.....

That was in the 1980's. I had to give up breeding angels due to children and a lack of space, but was able to start up again in 2008.
One of my first pairings was this pair of marbles, 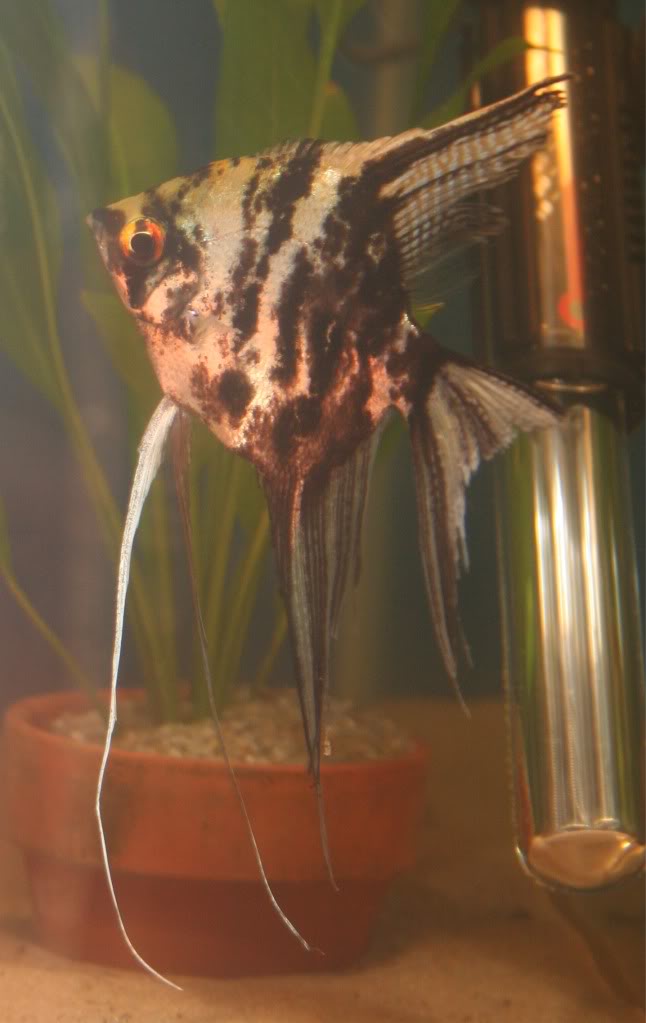 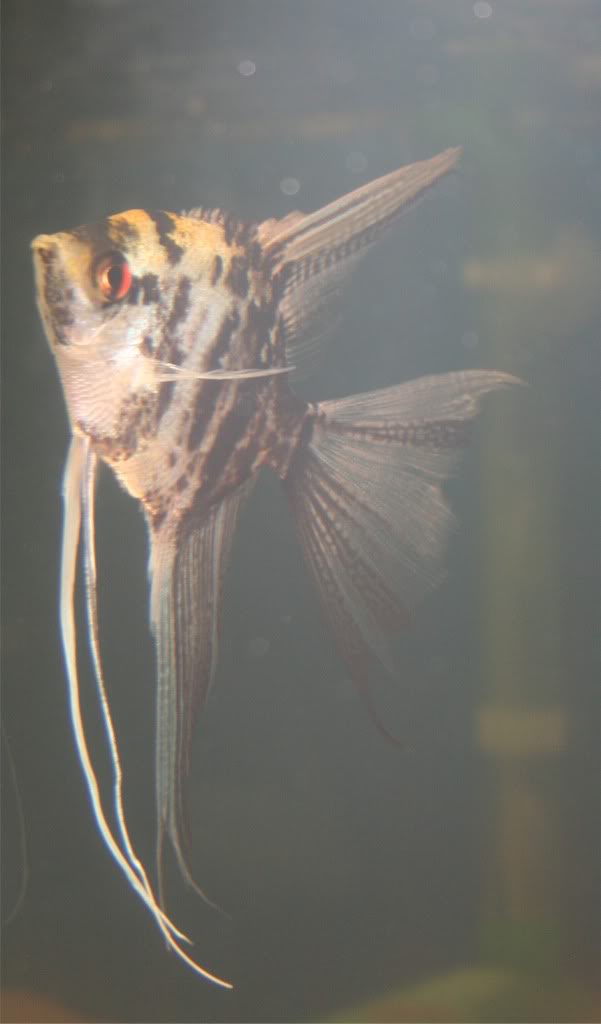 I was startled to discover that some of their babies were clowns and zebras, I hadn't spotted the signs of of the zebra gene at all.

Further more, others had very golden crowns and seemed to lack the ability to fade or darken their pattern, like this fellow :- I assumed that one of the parents must have been hiding a gold gene, but subsequent breeding results proved this fish to be an M/M - Z/Z and not M/g like I'd assumed, and showed the mother to be M/+ - S/Z and the father M/+ - Z/Z. 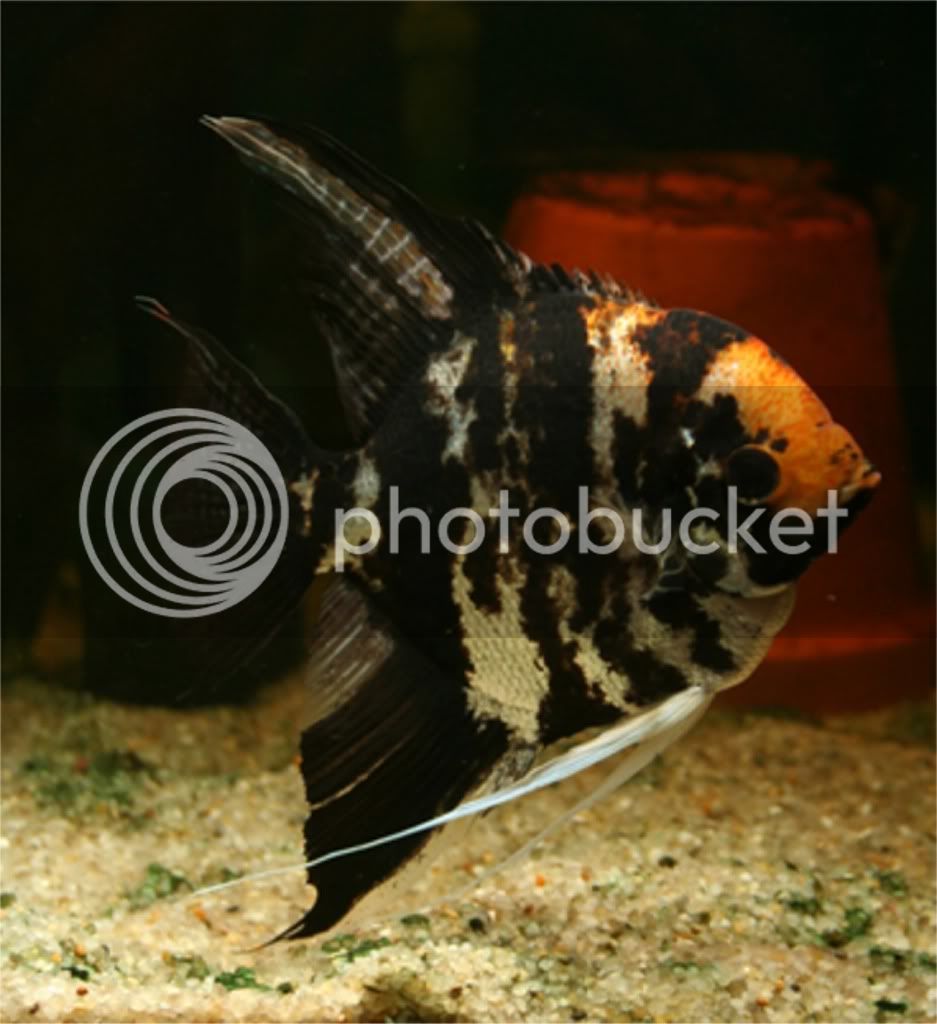 who I assumed was M/M or M/g and got a mix of offspring, some of which looked startlingly like gold marbles
This fish for example.... 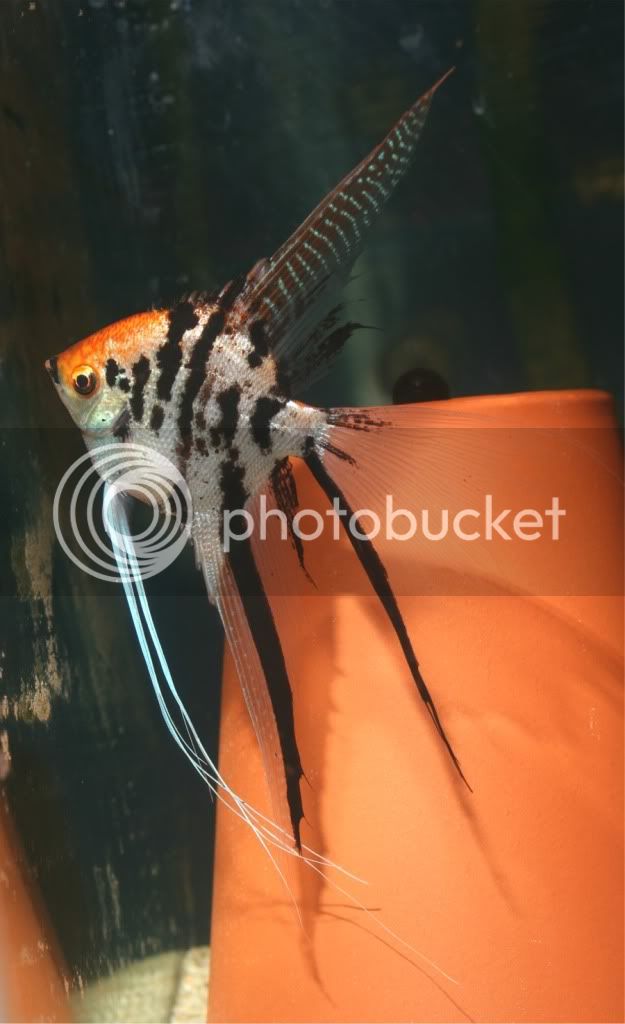 This fish looks too gold to be an M/g, yet the mother was M/+ so even if the father was M/g this fish can't be Gm/g. And it wasn't an isolated individual, there were several of them,
I mated this next one... 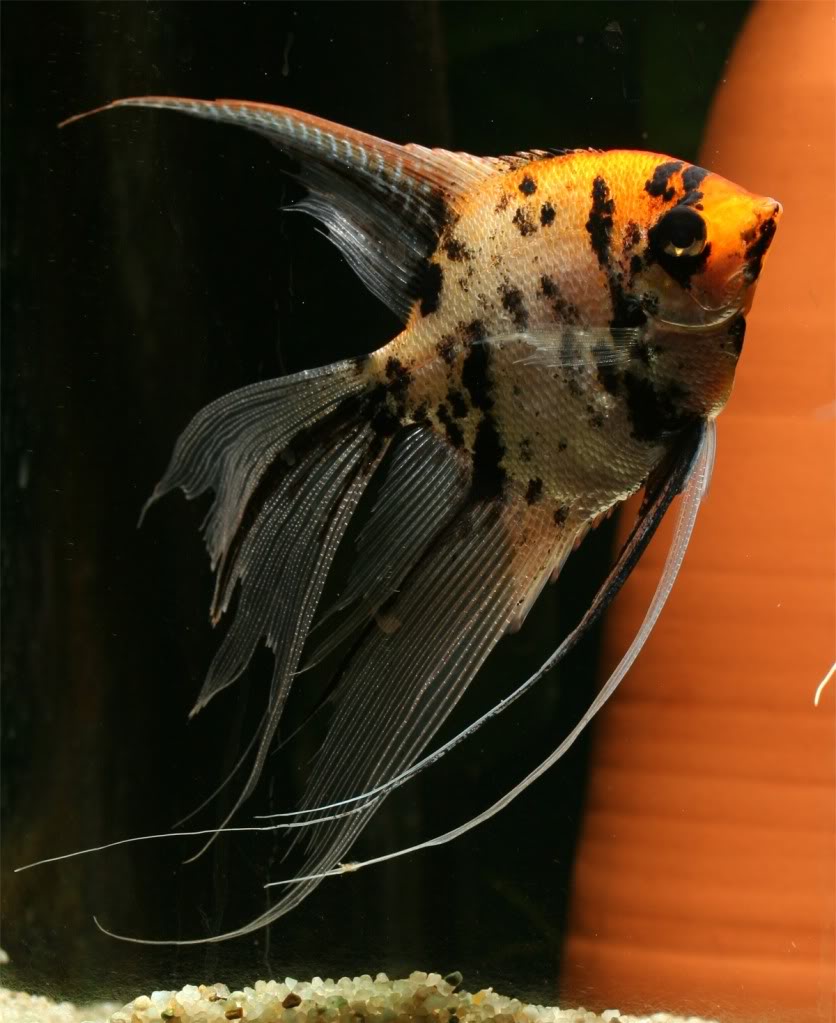 to a gold and was once again suprised by the results....
All the babies had some degree of marbling, some having more than their father....
these are clearly M/g's 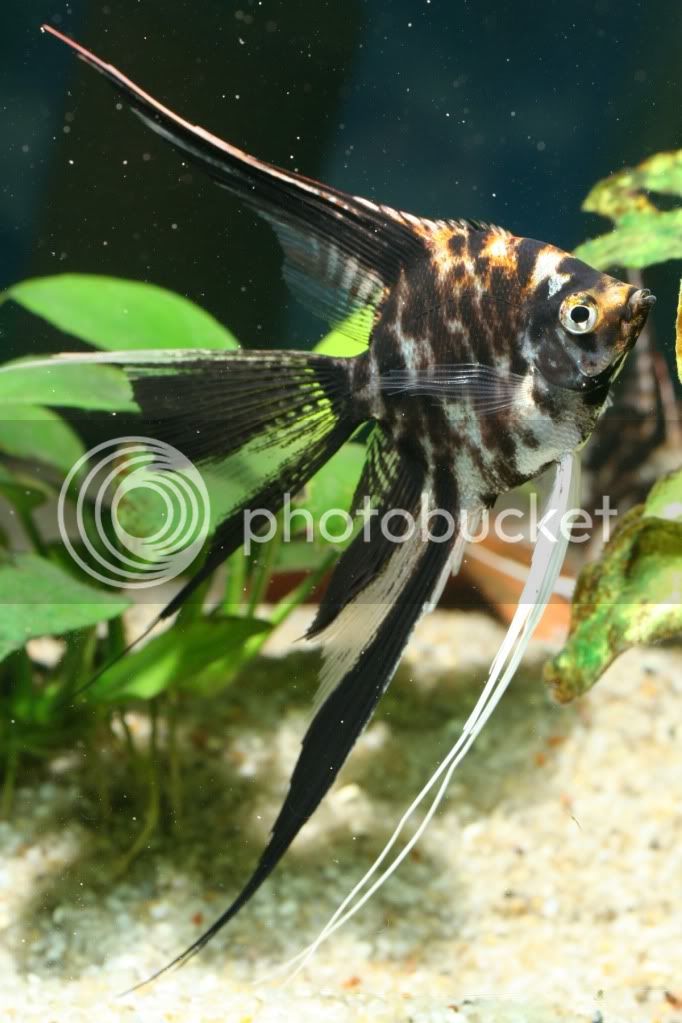 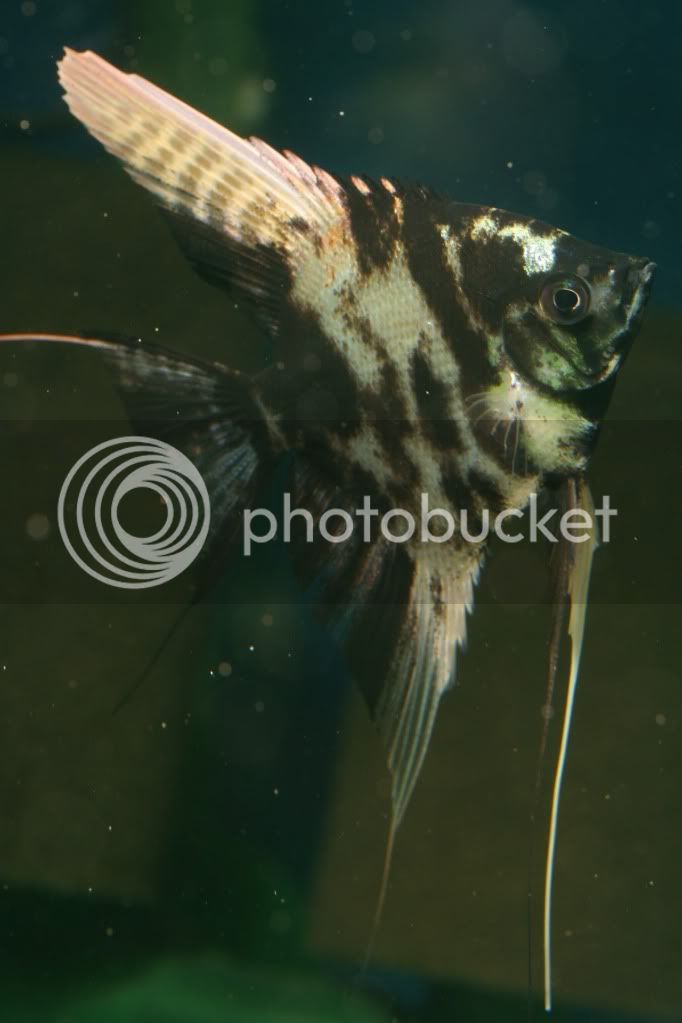 whilst some had much less and are clearly Gm/g's 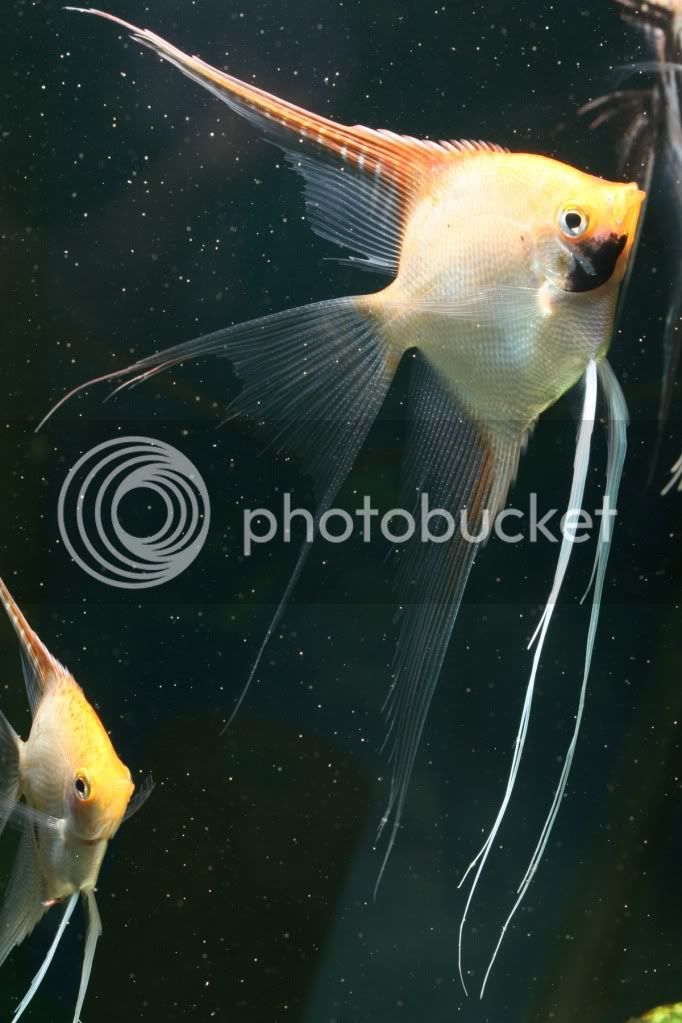 so the question is,
If the father is M/Gm why does he have less marbling than his M/g offspring?
and since Dad is M/Gm his father must have been either M/Gm or Gm/Gm, If M/Gm why does he look so different to his son? whilst Gm/Gm seems highly unlikely as he had so much black.

These are questions to which I currently don't have answers, but as this latest generation are coming close to breeding age, I intend to try some different pairings, which might eventually give me some.

Re: A Magical Marble Mystery Tour

Keep an open mind, assumptions can often be wrong!

Only too true, I have been there many a time