Back on TBAA I posted about my koi project.

Basically I paired these two fish 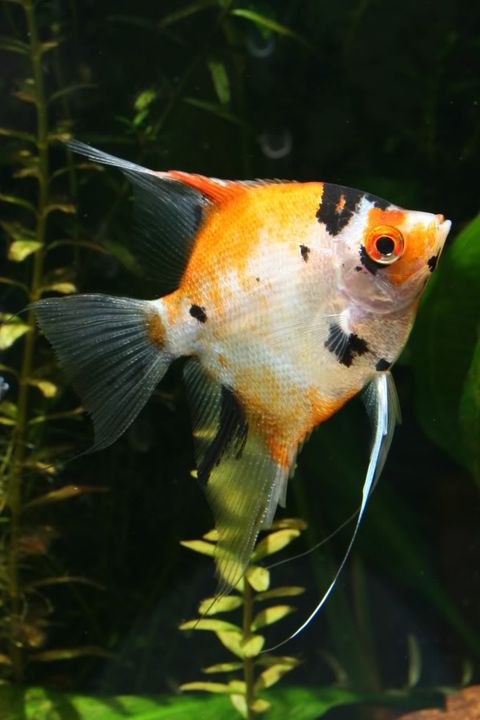 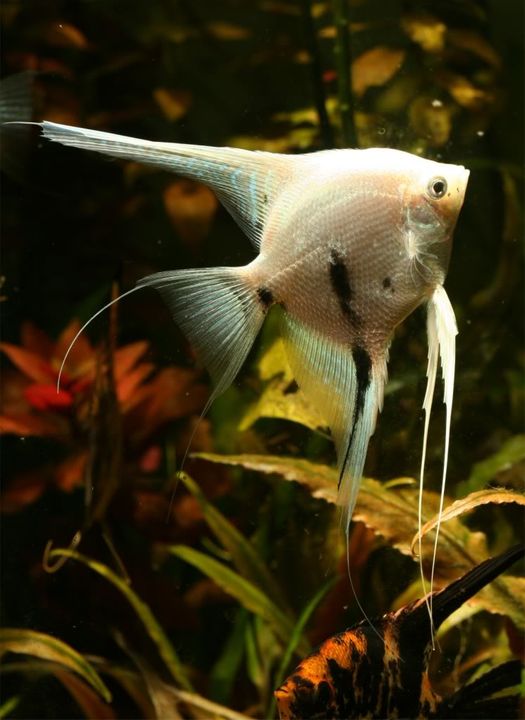 With the hope that some of the offspring would inherit her colouration and his fins. Well as they've developed It would appear that the father's fins have passed on better than the mother's colour. None the less some of the youngsters have pretty reasonable colour.... 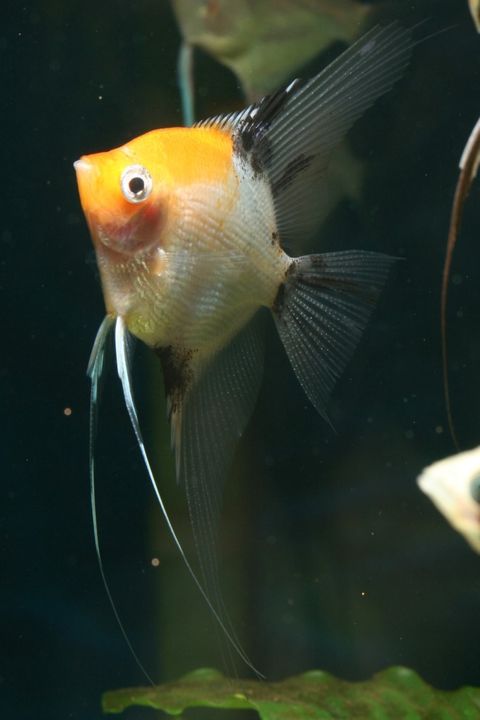 Now one option would simply be to pair a couple of the siblings together, but as some of you may already gather, if I can avoid sibling x sibling pairings I do. So instead I've paired these two up... 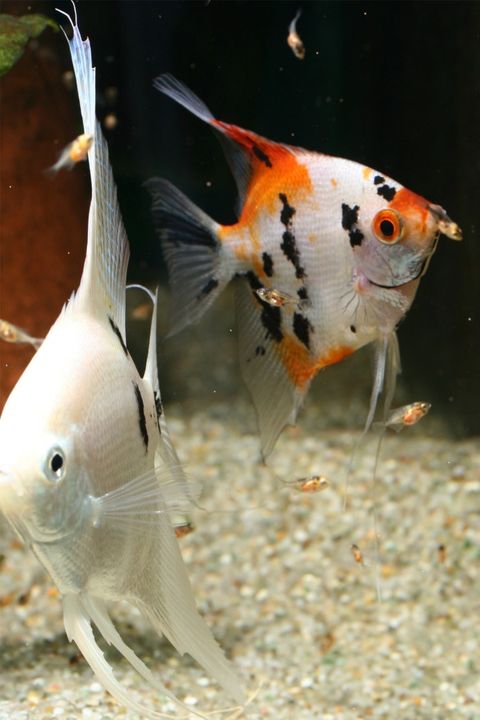 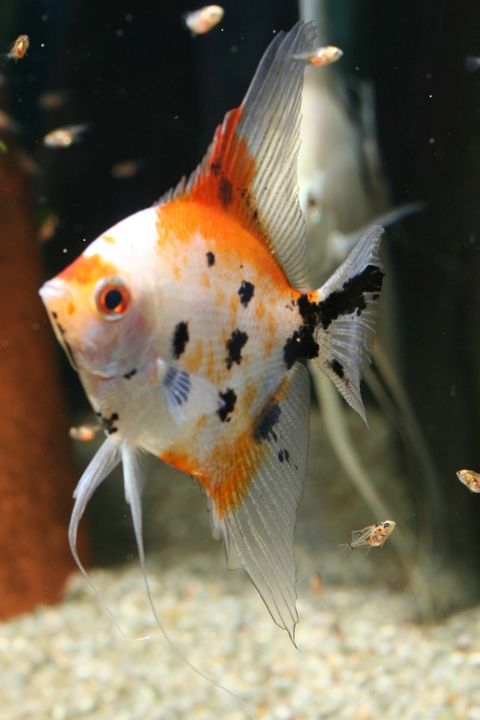 Mating offspring from these two pairs will result in youngsters that are 50% less inbred than would be the case from a simple sibling x sibling cross, but to improve things still further I have youngsters from third pair, so next stage of my plan is three different pairing A1 x B1 : A2 x C1 : B2 x C2
Where A1 is a fish from the first pair, B2 a fish from the 2nd pair etc.
The biggest challenge with this is keeping track of which fish comes from which parents!

One further point of interest, I have a suspicion that koi which carry a smokey gene have better colouration than those that don't. It's not based on anything concrete, just a hunch. Brian, my avitar carries a smokey gene, Phil, his brother doesn't, so it will be interesting to compare the colours of this batch with their cousins.
_________________
Blessed are the cheesemakers!

It sounds like you have a plan. This project seems to be progressing. I wonder how long it will take to develop a koi with 90% coverage like the ones in the USA?

Lovely looking angels, I wish you every success in your endevours and look forward to seeing the results,

You have some very pretty koi there Rob,as far as you hunch goes regards the smokey gene lisa has told me that it helps with the coverage of colour,i havn't had chance to put a smokey across my koi yet but it is in my plans to do so,so it would be great to see how you get on with this , please keep us posted.

Nice one, Koi's are fun to work with as you never realy know what will happen until you breed 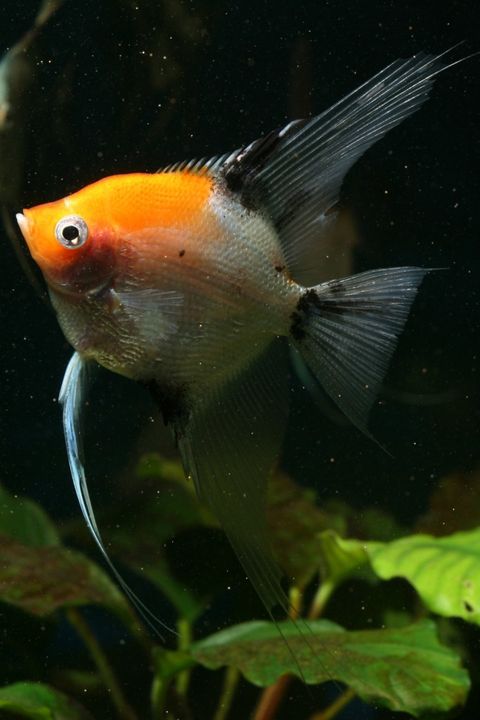 That's one from the first pairing.
It's very early days still, and there seems to be a huge variety in the offspring from the second pairing, including a couple that I'm very excited about, but didn't want their photos taken, but these were obliging.... 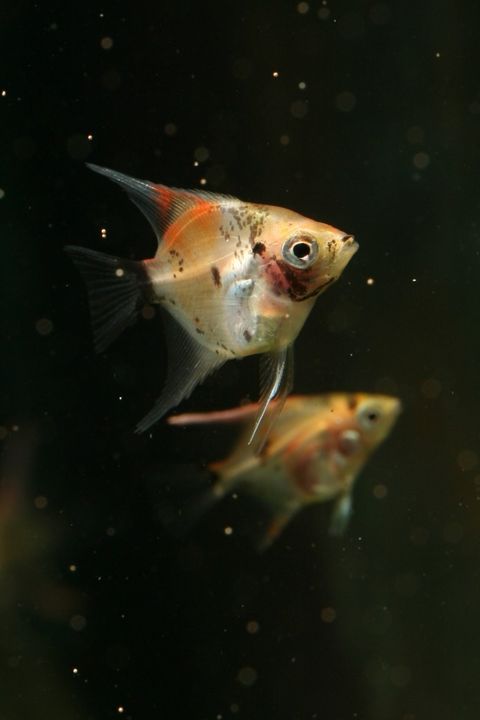 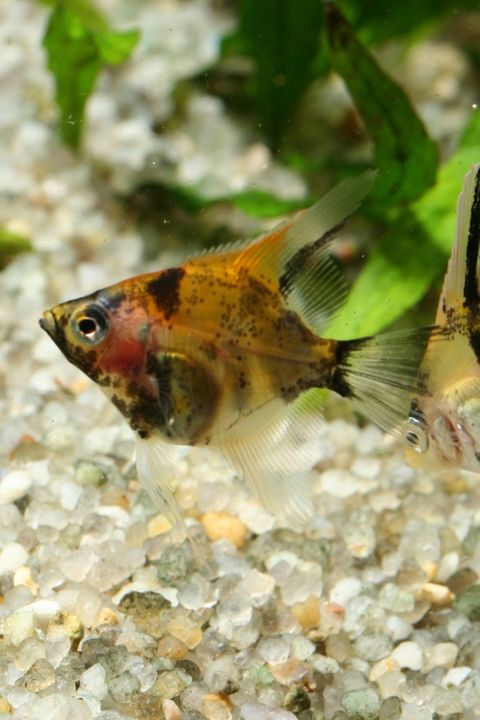 The colour in those is showing already i would be excited about those as im sure they will tern out stunning.

The colour in those is showing already

Koi can be very fickle, sometimes the colours seem to flare when they're young, and burn out by the time they're six months old. Others look nothing then come good as they mature, and then there are the ones that show early promise, seem to "burn out", then come good when you've taken them to the shop to sell!
_________________
Blessed are the cheesemakers!

The bright orange near the dorsal on the first fish is interesting. I can't wait to see how that one developes. The second fish seems to have a good overall orange coverage too. Your project is obviously heading in the right direction. Keep up the good work.

Very, very nice Rob! They show lots of colour for such young fish; my koi have no orange on them at that age. I can't wait to see the ones you're 'very excited about' !!!!

Not the best photos, but this is one that I've got my eyes on, in the flesh it actually looks more red/orange 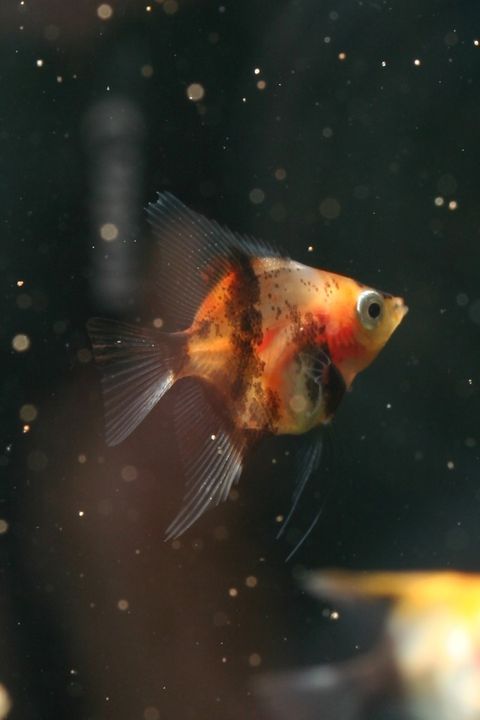 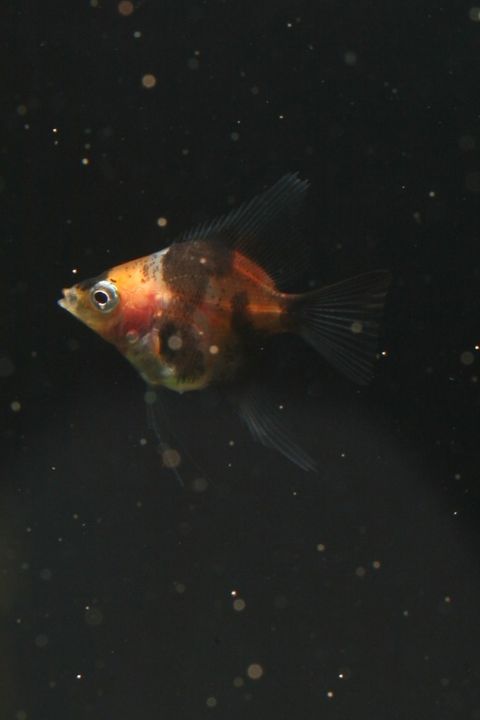 This last one shows the contrants to one it its more average siblings... 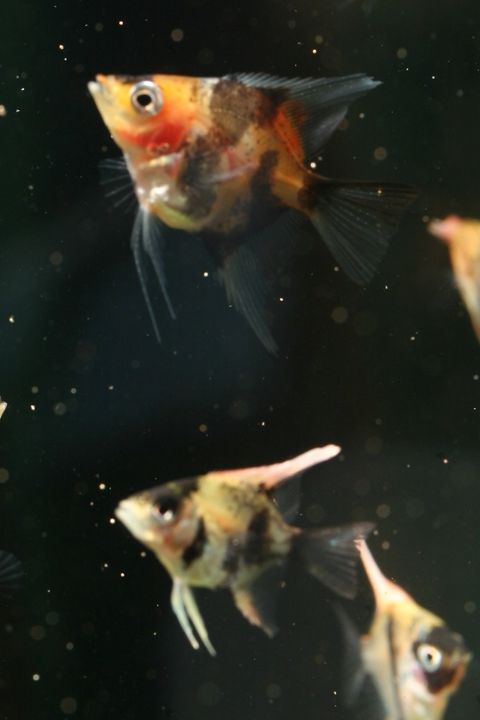 There is a big difference between them rob no wonder you are excited to see how thay are going to turn out.Exciting stuff to say the least.Please keep us posted on how they do.

WOW!!! Its not just the fantastic colour but the markings are also unusual!!!!! We really need to see this one develop, I sense something quite special in this one!!!!

I know from past experience not to get too excited about koi at this age, as they can change a lot, but this one certainly catches the eye!
_________________
Blessed are the cheesemakers!

I concur with all previous comments. The marbling on that one is very promising. I always like to see a koi with plenty of black on the body.

I've been splitting this batch up and move most to a larger aquarium but kept about 40 of the better ones seperate, this is a few of them 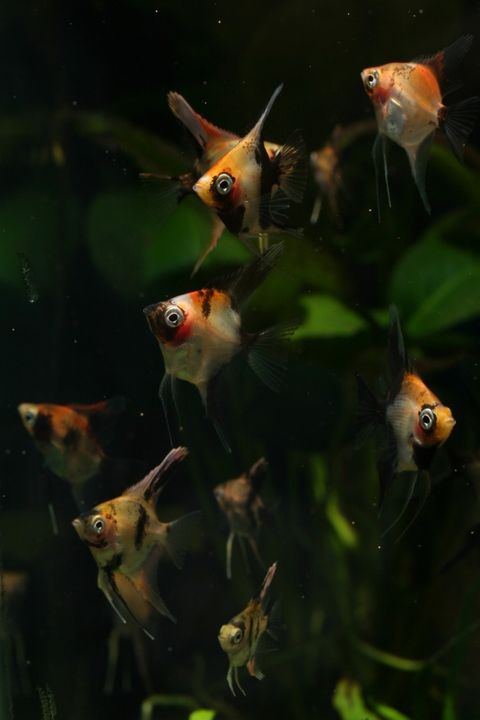 You have some nice strong colour in those Rob.

They're coming along nicely Rob, and there's some real stunners amongst them! I think koi are one of the best varieties to cultivate, you can really see the effects of selective breeding in most cases. Can't wait to see these as adults!

A few more photos, of a couple of my favourites,
As I've mentioned before, with koi/gold marbles, over expose them and they look washed out, under expose, and they can look much more orange/red than they actually are, so I've tried to select photos which give an accurate impression of the colours I'm seeing, and in some photos have included other, less well coloured siblings, to show the contrast.

This is my favourite, I call it Red Robbo.... 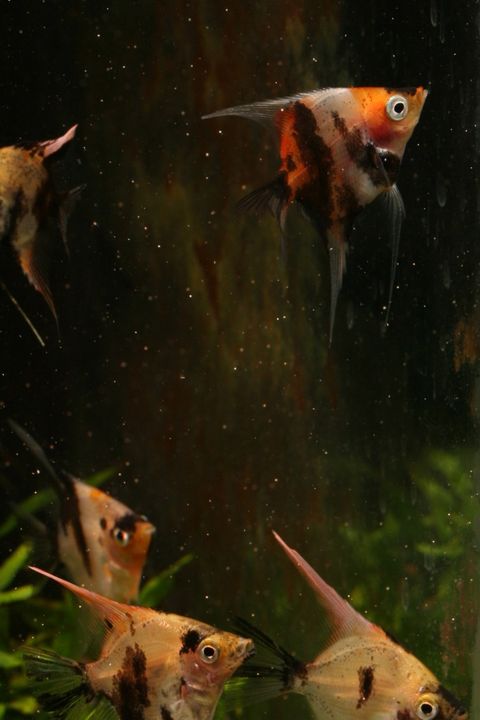 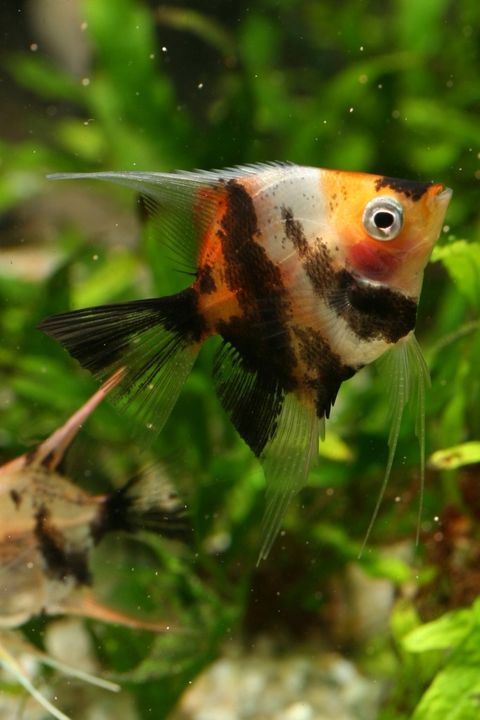 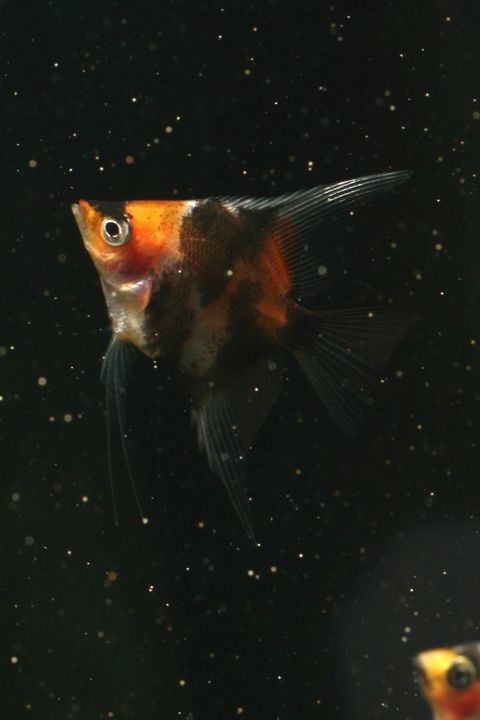 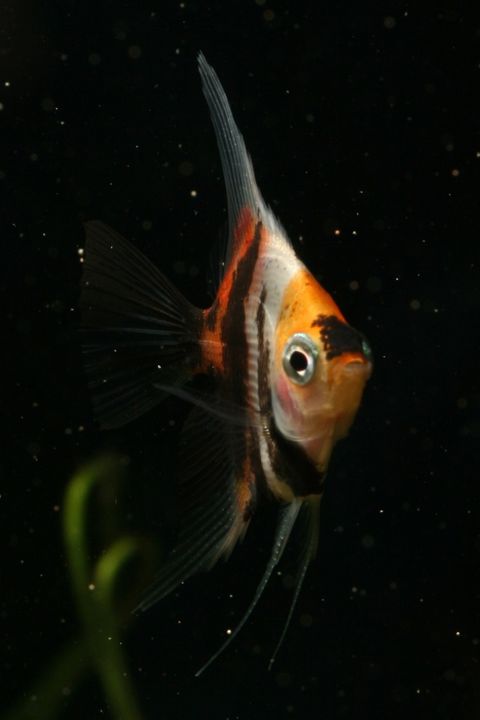 And this one I'm calling Flame.... 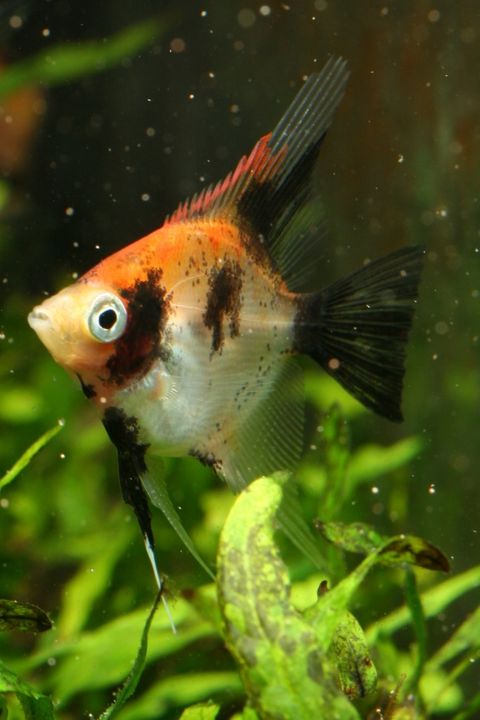 He/she's a beauty Rob. I love the black marbling.

They are all comeing on really well Rob & the colour intensity on some compared to others is remarkable.