It seems I've spent my entire fish keeping life (all 8 months of it) trying to cure sick fish. To date I've got a success record of 0/6. Now my second Angelfish is sick and hasn't responded to any treatment as yet. Here's a quick history of my sick fish history:

July 2016 - Bought 180L tank with 2 Angelfish second hand
August 2016 - One angelfish spent a lot of time in top corner of tank and didn't eat too much. Also added 6 x Platies and a bristlenose ancistrus.
September 2016 - Sick Angelfish eats less and less
October 2016 -  Sick Angelfish loses ability to stay afloat and keeps sinking to the bottom of the tank. After treating for suspected bloat/hexamita with Octozin, it didn't cure him and he died. I did complete the course of Octozin just in case other fish had it.
November 2016 - Lost a platy to similar symptoms where it stopped eating and ended up on the bottom of the tank.
Jan 2017 - Lost a platy very quickly after being seemingly fine the day before, suddenly couldn't swim properly and died within a few hours.
Jan 2017 - Lost a platy which stopped eating but this time stayed at the top of the tank with it's mouth open. Tried treating for velvet, internal bacteria and gill flukes. None of which worked.
Jan 2017 - Added 2 x Pink Kissing Gourami, 2 x Pictus Catfish and 1 x pleco
Jan 2017 - One of the Gourami starts breathing heavy but seemed otherwise fine
Feb 2017 - Lost the Gourami that was breathing heavy and lost another platy which also showed similar signs as the last sick platy died before it got as bad. The Gourami had difficulty staying off the bottom of the tank but was still eating. We took the Gourami to the fish shop and they said the gills looked fine but the stomach looked a bit bloated. He was too far gone so we put him down.
March 2017 - The remaining Angelfish stopped eating and developed red marks at the base of both pectoral fins. Hasn't eaten for about 2 weeks. Looks bloated. Treated with one dose of Anti-Internal Bacteria and based on a recommendation from the fish shop, given him a salt bath (2 litres of water with 4 table spoons of aquarium salt, for 1.5 minutes). No improvement after 5 days.

I've tested the water about a thousand times with proper drop style testing kit, as well as getting 2 different fish shops to test the water. Every time the parameters are good (0 ammonia and nitrites, minimal nitrates, ph 7.5).

We don't use any cleaning products near the fish tank. Never use aerosol or plugin air freshners. We do use Yankee candles, but this doesn't appear to be a problem based on the research I've done.

Really don't understand what the problem is. Right now my only plan is to wait for all the fish to die one by one and then strip out, clean and restart a new tank from fresh. I'd rather not do that, I'd rather clear whatever is killing the fish so that the fish and us can actually enjoy being there!

If anyone has any ideas, please let me know. Here's an image and video of the latest sick Angelfish: 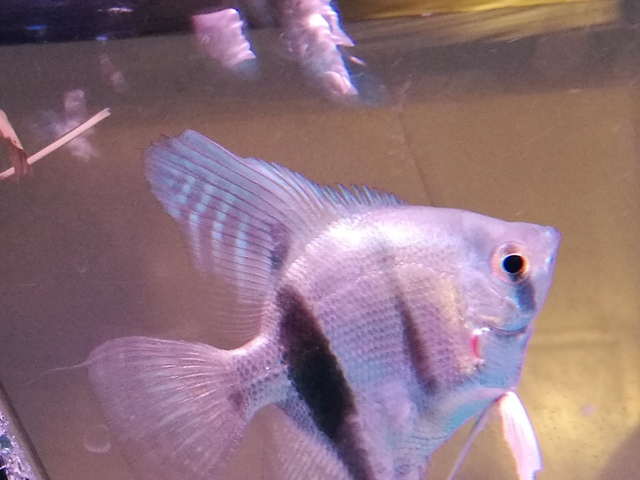 So I thought I would post back what has happened over the last few weeks just in case some other fish owner is experiencing similar issues. I hate it when I find a forum post without a conclusion one way or another!

Following my numerous failed attempts to self medicate the angelfish, and with a complete lack of knowledge as to what was wrong, I decided to take the fish to a vet. She was very helpful and gave Shui an antibiotics injection. This had an almost immediate effect and Shui started to recover well. I also got some antibiotics to put on the food so the other fish could be treated in case they had the same issues brewing.

Shui made a good recovery but then started regressing. Although he started eating again, he wouldn't eat much and would only eat bloodworms. This made it difficult to get more antibiotics in him. Therefore I took him back to the vet and she gave him another injection. This was a couple of days ago and I'm pleased to say Shui is now almost back to normal. The swollen stomach is virtually gone, he is breathing normally and eating much better.

I still don't know what the exact illness was, but at least I now know of a good vet should my self medications fail in future.

I've also done a few major water changes and gravel vacs to hopefully eliminate any trace of the disease :-)

Fingers crossed this has broken the cycle for good!

So sorry to hear what you've been thru, lets hope its all over now!

Ditto.
and sorry for not offering advice but by the time I saw the original post I figured that the problem would have resolved one way or the other.

Hi Pete, glad to hear the angel recovered! Do you know what the antibiotic used in a) the food (baytril?) and b) the injection was? It may be of use to people with angels with a similar problem.

Similar topics
» Sick Angelfish - Possible Virus?
» New Angelfish - but what are they?
» my angelfish
» What angelfish shall I get?
» My new angelfish