Filter troubles - can anyone help?

Filter troubles - can anyone help?

I hope I'm posting this in the right section, please move if not.

I have two JBL crystalprofi external filters running on my tank and both recently needed a clean as the pipes were blocked. Since cleaning one of the filters has been playing me up. It appears to be full of air but no matter what I do I can't seem to release it. I've tried rocking the canister about - which has it 'fizzing' away and I think the air has gone only to go sit back down it start 'fizzing' again. This morning I switched it off, opened the canister, emptied it of water, and put it back together again. I checked the seals on the pipes to make sure the nuts were tight - all fine there so I connected the thing all back up let it prime itself and plugged it back in. It started to run straight away with no problems but I left the outlet out of the water and gave the filter canister a rock about anyway. It did seem to dispell some air and then went into it's normal quiet mode.

As soon as I'd put my buckets away, cleared away towels etc and got sat back down it started 'fizzing' again!! What The Heck?! I really don't get where the air is coming from.

I think I might have cured it. I've been on JBL's website and looked at their FAQ's. There was a mention of the problem I was having and the answer was a possible air lock within the impeller housing. I've just had it in bits again, had the impeller out, cleaned it and the housing (even though I only did it a week ago and it wasn't dirty!) put it all back together and it's quiet at the moment ... we'll see how it goes

Glad you've solved the problem, not really familiar with the JBL filters, but with externals in general air in the impellor chamber can cause a lot of noise, as long as the pump is pumping some water & there's not an air leak on an o ring, tap, pipe, etc. the problem will usually sort itself out. sometimes turning the filter off for a few seconds and then on again will give the air chance to escape, gently rocking the filter, as you were doing, also helps.
Another common cause of this sort of problem is refilling the filter canister with water, before reconnecting the pipes and "priming", it's much better to put the thing back empty of water, and then prime it.
_________________
Blessed are the cheesemakers!

thanks ... it is better but not completely cured. It's definitely air but where it's coming from I don't know. This filter was brand new about 6 months ago. I bought my first JBL external in 2012 and I do really like them. I just wish I knew why this second filter has suddenly started playing up. The only thing that changed was a hose clean and I've checked them and all the connectors and all is fine.

It shouldn't matter if you left the outlet pipe out of the water, as that's the outlet. Anything on the outlet side of the filter won't let air into your filter while it is running.

So it's either the inlet side of the filter, or the seal around the top. Did you know you can use petroleum jelly (vaseline) on the rubber seals to make a better seal? You don't need to use a lot, just a light coating seems to help, just run the seal through your fingers and replace.

Rocking / nudging the filter, as has been mentioned by Rob should get any existing air out, but if it keeps coming back, then air is still getting in. It may not be a seal, you mentioned recently about adding air stones (or similar), if you look closely at your water, it may contain very tiny air bubbles these can collect in your filter tubing and create larger air bubbles over time, it's happened to me.

Hi Dean, because the filter is only 6 months old and comes with a 5 year guarentee I went back to the lfs where I bought it and they said to put vaseline around the seals too. I was dubious as I've learned the take lfs advice with a little pinch of salt. Now someone else has said it's fine and safe I won't be as concerned.

Currently it's quiet this morning so obviously it's sorted itself out. While I had the pipes off to clean them I took the opportunity to also shorten them by an inch as they were kinking behind the tank by a small amount - enough to cause sediment to settle and block the pipes.

As for rubber seals - there are none on JBL filters. They used to have them but they re-modeled the distribution plates and now there's no need for the fiddly seal. To begin with I thought the re-model was a fantastic idea and I bought the new distribution plate and converted my 2012 filter to the new design. I've had no leaks at all from that one and no trouble from it either. This new one on the other hand has leaked twice (although I was to blame for both instances) and now there's the air problem. If I continue to have trouble with it I'll head to my main Maidenhead Aquatics as they are the main dealer for JBL's and I know they will help me sort the problem

I'd need to take photo's to show you all how these filters seal without a rubber seal but I don't want to have to open this filter again to do that! If you are interested though have a look here

The 'stripdown' is similar to a Eheim Professional canister filter.

When you undo the 4 corner mechanism and lift of the lid, you disconnect a seal. The 'seal' may be a removable rubber seal, or the 'Seal' could (I suppose) be integral, that is, as long as the lid and the bottom canister meet, that is the seal, so that is where I would suggest putting vasaline.

Vasaline is fish safe if you use the basic stuff.

Also, I don't know if yours is a slightly different configuration, but at 1:21 in the video you will see the hose connection block enter the screen from the right. If you look at this block, I'm sure you're likely to see 2 small rubber seals on the two pipes which point downwards as you insert it into the lid. 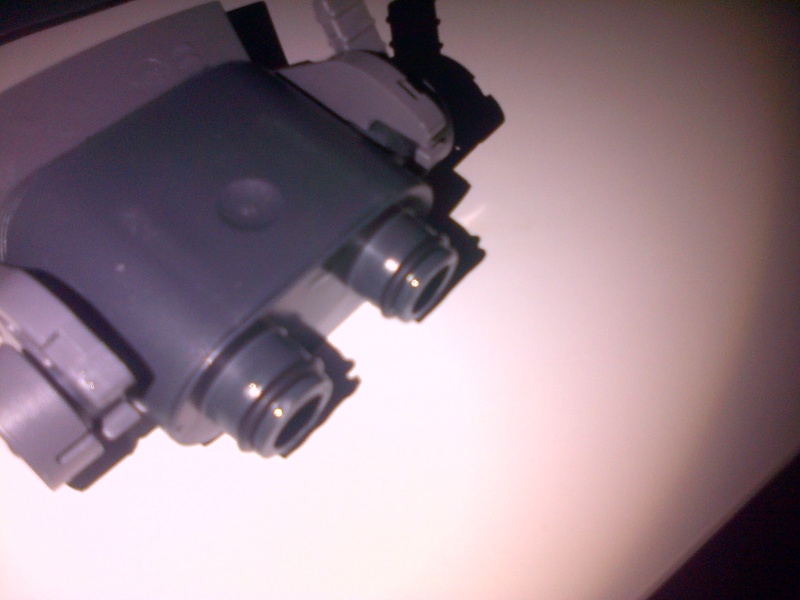 If your JBL has similar seals there, lightly vasaline those too.

Also, although a 'seal' may be a physical thing that you can touch. When people talk about seals, they can also mean a seal which doesn't really exist. For example, when you push a length of hose onto an uplift tube, you create a seal. So, looking at it that way, the JBL still has lots of seals!

You mention that the pipes were kinked but then shortened, it's possible the kinked area is damaged and letting in air.

You say it's quiet, so maybe it just needed a bit of time to right itself

I checked the pipes after I'd cleaned them - when I say 'kinked' what I mean is more of a slight dip so instead of them running in a straight line from tank top to filter they were ever so slightly too long and so it created a 'dip'. This allowed the nice brown gunk to collect and then eventually affect the flow. I took the pipes off and ran a brush through with some hot water until clean. I shortened them, checked for damage and put them back.

From the photo's it would seem this filter is similar to the eheim - hardly surprising as both a German made I believe.

It's still nice and quiet so it does indeed look like it's righted itself. It would seem that the noise was coming from air in the impeller housing. I'll have to try and remember that for future reference.