The most simple cross to predict is:
Mono-hybrid cross
Mono meaning 'one', that is, we're only dealing with one particular loci. This could be any of the ten known loci, for example Veil.

To predict the result of a cross, we need to know the Veil genotype of each parent.
The female could have no veil (+/+) she may only have one allele for veil (+/V or V/+) or she may have two alleles for veil (V/V) in which case she'd be a super veil.

The male could have any of the above genotypes too, in this example I cross a veil with a veil (V/+ x V/+).

To calculate the offspring, we use a punnett square: 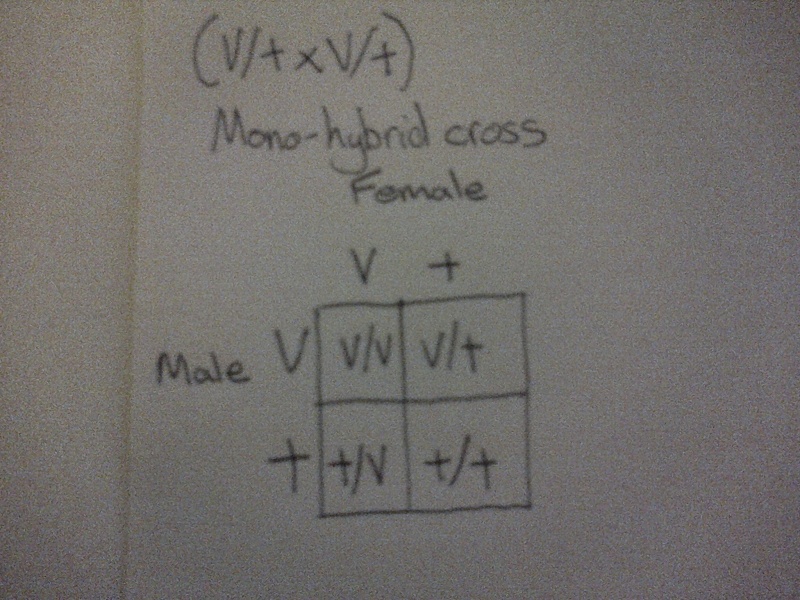 You can use the above method for calculating any single loci (Dark, Stripeless/Zebra, Smokey, Streaked, Halfblack, Veiltail, Pearly, Albino, Philippine Blue or Bulgarian Green) of two parent fish.

You will notice that if both parents have double dose, the result is always 100% double dose.
Whereas, if the parents only hold a single copy of a gene you will always get a 25/50/25 split.

Okay, that was the easy one, now lets look at more than one loci
Di-hybrid cross
Di meaning two (or double), that is, we're dealing with two loci at the same time, which sort independently. You can use the following method to calculate any two loci. In this example, we will calculate Veil and Albino.

Okay, let's look at the Females genetics first, let's say she's a Veil Albino: V/+ - a/a
Now, she is only able to contribute either a 'V' or '+' allele on the 1st veil loci, because that's all she has!
On the 2nd albino loci (a/a) she will either contribute the 1st 'a' or the 2nd 'a' - let's number these to make things clearer: 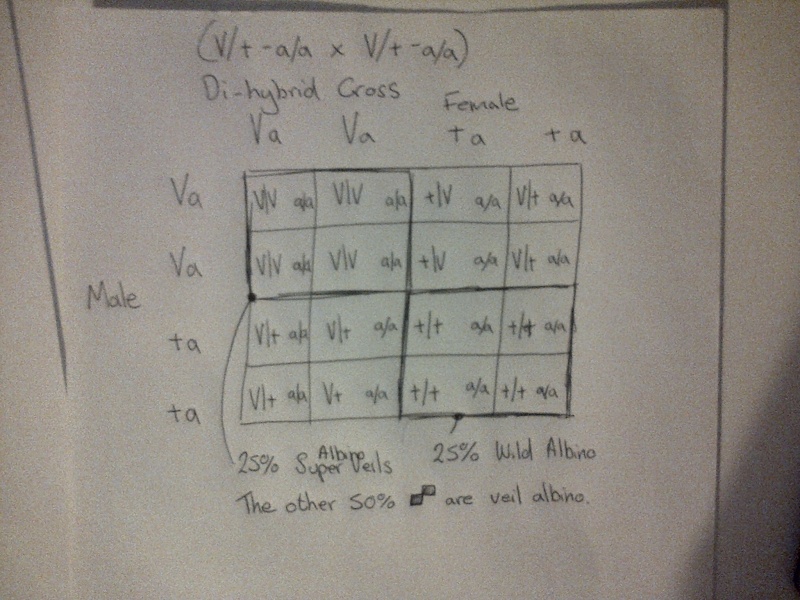 Yes you've guessed it!
Tri-hybrid cross
A trihybrid cross uses an 8x8 punnet square and works with 3 loci! - so that's 64 squares to fill in!

An example trihybrid cross is (g/+ - S/S - p/p x g/+ - S/S - p/p) and it's at this stage that most people get really confused about what values to record along the top row. In this example, it would be:

If that confused you, I'll notate each of the S/S's and p/p's so that it's easier to understand:

You can draw your own punnett square for that one! Add the male values down the side. You can of course make the male or female a different genotype fish, but you must stick to the same corresponding loci.

These methods do work, but it quickly gets very complicated to draw the squares, for example, a cross using 6 loci would need a punnett square 64x64 and it would take a long time to fill in all 4096 squares.

Using all 10 current know genetic mutations of angelfish would require a punnett square 1024 x 1024 and would need over 1 million boxes to be filled in!

Luckily we can use rules of probability instead to predict the outcomes, but that's for another post!
I hope this post helps someone, if not, I enjoyed putting it together