One of my pearlscale albinos has a patch on his side thats causing me a bit of concern, its only grown very slightly since I first noticed it, when I first saw it, I thought it was damage of some sort, maybe someone getting a bit boisterous, but its not got better so I guess its something else.

Being pearlscale he's obviously very shiny and this patch is flat and matte, theres nothing hanging off him, nothing raised, he's eating well, is in the middle of the tank with all the others, so shows no sign of distress, looks healthy in every other way.

I've done my best to take a photo of it, but as soon as I get near the tank they go barmy thinking I'm about to feed them!! 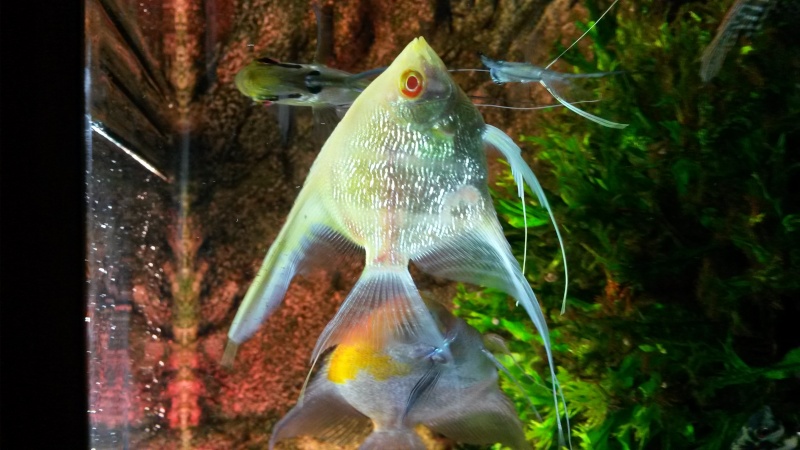 Not sure why the picture is that way up

lol but you can see the patch

Looks like an ulcer, which technically means an open wound. Ulcers can be caused by bacterial or viral infections which actually cause the hole, but more commonly they're caused by opportunistic bacterial infections getting into a damaged area of the fish. The original damage might be caused by skin flukes, or other skin parasites, or more likely fighting or if the fish caught itself on an ornament or decoration.

If possible isolate the fish in a treatment tank, and treat with myxazin, melafix, Interpet Anti Internal bacteria or Esha 2000. Personally I'd start with the Esha.

The problem with this sort of thing is that once there is an open wound, it's very easy for it to become reinfected, so you often need to keep retreating week after week. Using the different treatments I suggested with water changes & carbon between treatments, is often more effective than any one treatment on it's own.

The position of the wound also lends itself to the topical application of Esha, myxazin or even TCP. To do this, gently net the fish and lift it out of the water, apply the treatment to the affected area using a cotton bud, then return the fish to the tank. Whilst this method can be effective, there's a risk that the stress of being captured, and the damage caused if the fish struggles in the net, can do more harm than good. For this reason I'd only use this approach as a last resort.

Ohh blimey Rob, thanks I'd better get on to it quickly then!

OK he's in hospital tank, first dose of Esha gone in, if its going to work, should I see an improvement by day 3? should I repeat if it appears to be working or do I try something else?

To some extent it's a case of suck it and see.

Do regular water changes to keep the tank clean and reduce the risk of reinfection.
Once you've completed the course of treatment, leave for a couple of days, then add carbon to remove the treatment.

If the wound has got worse, try a different treatment. If it's improved, I'd do a second course of Esha.
Repeat the procedure above, and then I'd probably do a week of melafix.

If the wound continues to heal with melafix, I'd probably rest it for a couple of days, carbon, then another course of melafix, if it seems to get worse, or remains unchanged, then I'd go back to Esha, or try myxazin.

OK Rob thanks. where would I be with out you!!!

I only hope others get some help from my constant questions

Can't believe this has been going on so long! poor fish, I've been trying my best but nothing seems to be working really, it has got slightly worse, meaning the patch has got larger, but its still just pale rather than red raw. Apart from the ulcer? he's fine, eating well and holding his own with the rest (I did have him on his own originally, throwing every treatment at him, but have moved him back), I have tried fishing him out and dabbing with esha, I've done that twice now, it was much easier to do than I anticipated, how frequently should I be doing this? should I try dabbing with anything else yet?

I'd strongly recommend keeping him isolated from the other fish. Often, sadly, with fish diseases, treatment is about preventing the spread of disease from sick to healthy fish, and if despite treatment the condition seems to worsen, often the kindest approach is to put the fish down. It doesn't sound like it's reached that point yet, so you can certainly carry on with the topical application of esha or myxazin, you can do that on a daily basis. NT Labs make a product called propolis, which is sold for treating koi, the idea is that having carried out a topical treatment you drip this onto the area affected & it forms a watertight cover over the area, in theory this reduces the risk of reinfection. It works well with koi, but on the one occasion I used it on an angel, if anything, I felt it made matters worse. But it might be worth a try.

The other thing you could try if you're willing to spend the money, is to get a vet to prescribe some antibiotics, but that won't be a cheap option.
_________________
Blessed are the cheesemakers!

hydrogen peroxide 3 or 6 %. Hold the fish secure in wet net, dry wound with tissue. One drop of hydrogen peroxide on wound, wait few second. Put the fish back to the tank with good quality water. Never allow to get peroxide around gill or eye area. HP will burn them very quick. Try to do it as quick as possible. Melafix or few drops of methylene blue will help with recovery.
HP will burn area around the wound but if the fish is healthy otherwise, will recover quick. Keep water in tip top condition and change as often as You can. Always same pH to avoid skin coat damage.

I shall persevere however

thank you for your advice