My pair have Albino's have had finally got to free swimming after a few attempts, but I noticed after the fry went free swimming the majority were at the surface. Its been 4 days free swimming now and have lost 70% in the last day, I've been feeding freshly hatched brine shrimp but the fry don't seem to be feeding, as fry are smaller than usual. Is this due to albino being naturally weak or just a bad batch. Any one had any similar problems or advise
Thanks
Danny

Hi Danny,
Albino animals in general often have problems with eyesight. In a normal eye the light enters through the iris, is focused by the lens onto the retina. The rest of the eye is shrouded by dark pigment. Albinos lack the ability to make the necessary dark pigment. With larger fish this isn't too much of a problem, because the body is so thick that the eye is effectively shielded, but with albinos, when small they are almost transparent... 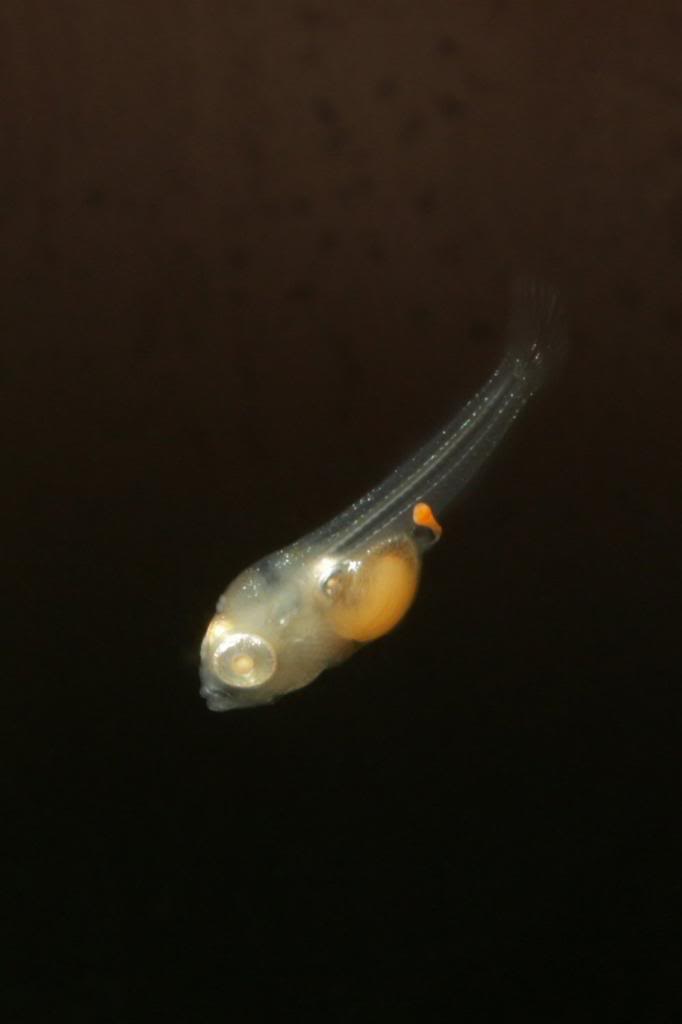 ...which means that light can enter from all directions, effectively blinding them. - Imagine trying to read this whilst someone simultaneously shines a torch into your eyes!

Because of this, many breeders advocate raising albinos in low light conditions, however even doing this doesn't always seem to be enough. I was reading a thread on one of the American forums and one chap was advocating keeping both eggs & wrigglers in low light. His argument was that the light actually damaged the developing eyes, I'm not sure I'm fully convinced by that argument, but I can see how bright light might make it difficult for the embryonic eyes to adjust properly.

It's interesting that you should post this question now, as I have a pair consisting of an albino male and female that carries an albino gene, I have tried at least a dozen times to get them to parent raise, and have even tried pinching young without success. Inspired by the American thread I set up a tank specifically for them :-

2' x 1' x 15" high positioned end on, so it's viewed through one of the end 1' x 15" panels. with the sides and backs blacked off with aquarium background. I used black quartz gravel on the base, and included a terracotta spawning cone. No plants.
The tank is one of 5 positioned side by side and these are normally lit by a 4' fluorescent tube mounted about 1' above and towards the front. To cut out light I placed a towel on the front coverglass, so the only light that could enter the aquarium was through the rear coverglass and from the room itself. The tank is therefore dim, but not completely dark. I introduced the pair into this tank about a fortnight ago....

At the risk of jinxing things; they are finally doing an excellent job of parent raising, the babies went free swimming two days ago, and whilst some of the albinos are clearly struggling to find their way around, so far, it looks like significant numbers are managing to feed in these low light conditions. I will report on progress, but at this stage I'd say low light levels are definitely a key ingredient if you want to raise albinos.

Incidentally, the albino babies from this pair appear to be similar size to their normally pigmented siblings, so I'm not convinced that albinos are inherently small. What do you know of the parent's history? If purchased together it may be that they are siblings, and possibly already quite inbred, if so, out crossing both parents to unrelated fish, and then mating offspring from the two different pairings, could give you some better sized youngsters.
_________________
Blessed are the cheesemakers!

Thanks for the your advise and comments,
The parents history: female albino with stripes and male no stripes and were bought from different shops at different times so hopefully chances they are not related.
My breeding tanks are setup similar to yours I have 4 2ft tanks length ways and 2 tanks have 3 of the sides painted blue with just the 15x 12 side clear, and 2 have 2ft and 15x12 side blue. I have bare bottoms with a plastic plant and breeding cone in the tanks. Light is a 4ft tube approx a 1-2ft away in front of the tanks and 1ft above
I will try again in the darkest tank and this time cover the tank with a solid lid.
Will keep you posted on any progress on the next spawning

Well had another batch and had the tank covered this time so no light could get in, and once again day 4-5 of free swimming had lost the lot. Rob how are yours getting on?

how are yours getting on?

Not well, just one survivor, but not all mine were albinos, and the non albinos have grown so rapidly that I think they were predating on the albinos. I've now isolated the one survivor in a breeding trap.

On the plus side the parents did a great job of raising the non albinos, see http://www.uk-angelfishforum.org.uk/t384p60-robs-fish-room-tales#4002, and I have a strong suspicion that keeping the lights dim in the tank had a lot to do with their success.