Warning! This will be a slow thread. This project will take time due to financial constraints and time factors.

Moving on. I have permission from the "Boss" to go ahead with a fish house. We have a detached, brick build garage around 18' and around 9' wide. After a lot of thought about internal dimensions and space I think I'm going for 8'x7' internal space in the far left hand corner. We are currently in the clearing up phase and finally sorting the unsorted boxes of "stuff" that you collect over the years and gets moved about. It's not the fun part but got to be done. We need that space! 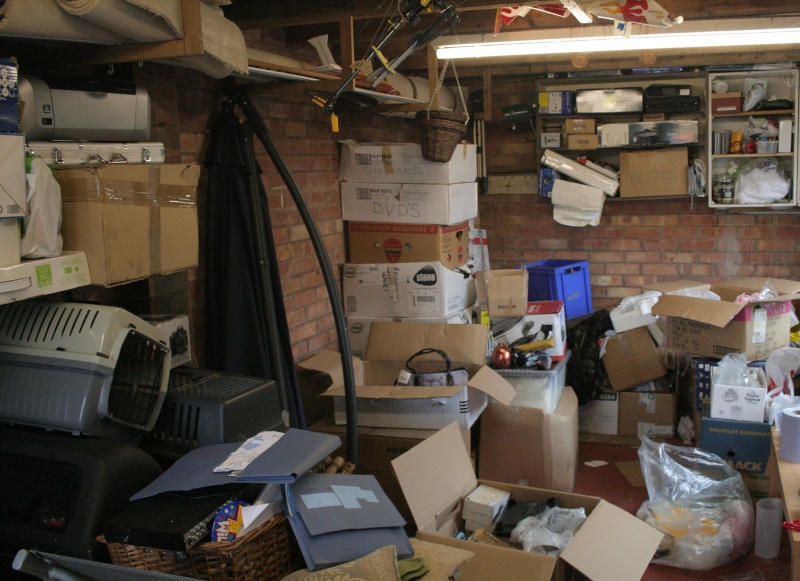 I'm often making little sketches and trying to figure out what size and how many tanks I can squeeze around the space. The tanks won't all be installed at once and I've pretty much decided the first rack will be 4 x 36x15x12's and 3 x 24x15x12's, I would like to go 18x15 on the 3 foots if they don't cost a bomb. At this point I'm considering the movement of fry to other tanks along with BBS hatching area and generally figuring out where everything needs to be. Apart from Angels, I want to try my hand at a few other species, Cories, (Gold WCCM's for the boss), and CPD's are on the list atm.

Insulation will be 50mm Kingspan/Celotex the ceiling will have the fluffy stuff as the beams are quite deep. Will go to space heating once other tanks are added.

I have a week booked off work mid May and hope to start framing and putting cables in during that time.

I've gone and dropped £93.24 on timber to get this project off the ground. This weekend should be a lot of clearing and removing "stuff" attached to ceiling joists and walls. Timber is being delivered on Monday 13th so Monday, Tuesday should see the studwork getting started. Hope to have it framed up and twin n earth in place by the end of next week.

I'm going to keep a running total of material costs for my own benefit and also to help guide others that may be contemplating their own build.

I will be taking lots of photos too so expect lots of bad shots of my shoddy joinery skills.

''Is this your 1st fish house,'' I've build one, and found next time i do this, i will do thing's differently. It's the experience that i had to go though which give me the knowledge to know what's best for me and my fish for the next time. it could be a refit or a new build fish house, anyway yours is going to be great good look

Phil Unsworth wrote:''Is this your 1st fish house,'' I've build one, and found next time i do this, i will do thing's differently. It's the experience that i had to go though which give me the knowledge to know what's best for me and my fish for the next time. it could be a refit or a new build fish house, anyway yours is going to be great good look

Hi Phil, yes it is my first ever fish house build.

I've done a lot of research since we moved into the property back in September 2011. I've been thinking about the air ring and decided against it and opted for piston pumps for each rack. If a pump fails I only lose air to one rack not the entire fish house and a spare could easily be stocked. As I'm also adding tanks over time it seems more convenient and cost effective on fittings/valves etc.

Initial tanks will have standard in tank heaters although I would like to move over to space heating once all tanks are installed. I think I would still have heaters in spawning tanks to save having to space heat to higher temperatures.

One thing I initially overlooked was a water preparation and storage solution. I've now considered this and allocated space for it.

As I'm using Rob's 2X2 timber style racking I've had to carefully plan what tanks will be going where so I will have timbers securely fixed to the walls where I will need to put the uprights. The uprights won't be very secure screwed into 4mm ply.

I don't have my scruffy plans to hand but I believe I can cram in the following.

I will also pop a few 12inch cubes I have either for shrimp or emergency hatching of pulled spawns.

I think the planning what you can cram in is the exciting part, filling tanks with water is the "nail biting" part.