Unfortunately ordering fish can be a rather hit & miss affair, over the years we've developed contacts with a lot of suppliers, and have come to learn what's generally good and perhaps more importantly what to avoid. That said, even when you're dealing with farmed stock, size and quality can be quite variable.
When it comes to wild caught fish, quality can be pretty variable, wild fish are often quite nervous when first placed in a tank, and often have a certain amount of fin damage from the catching, transporting to a holding station, repacking and shipping to the UK.

About a month ago we decided to try a few boxes of fish from a new Peruvian supplier we've not used before, so, with a certain amount of trepidation, I ordered a few, 9 to be precise, Peruvian Rio Nanay angels. I didn't have high hopes, but was pleasantly surprised when they arrived, bigger, fatter, and with much better fins than I had anticipated.

For the last moth they've been sitting in a quarantine tank at the shop. Initially they were rather nervous, so I put 4 smaller smokeys in with them, and soon they were rushing to the front glass when anyone approached & feeding like pigs! They were treated with wormer as a precaution and also for a little bit of fin damage.

Today I brought them home! As soon as I released then into the tank, along with a few paraibas to help keep them calm, they were looking for food, indeed they fed straight away.

For wild fish they seem remarkably relaxed, and although clearly still slightly nervous, they even let me take a few photos this evening, the flash didn't seem to bother them too much.
It would have helped if I'd cleaned the glass, but I'll get some better shots once they've settled in properly, but for the moment here are a few of the ones I took this evening. 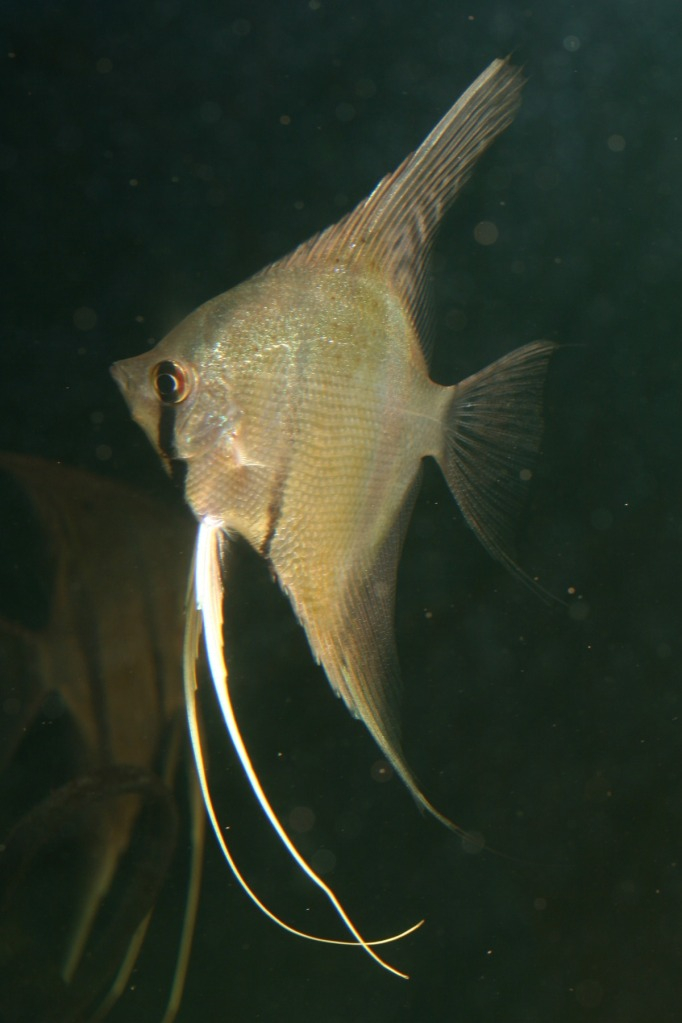 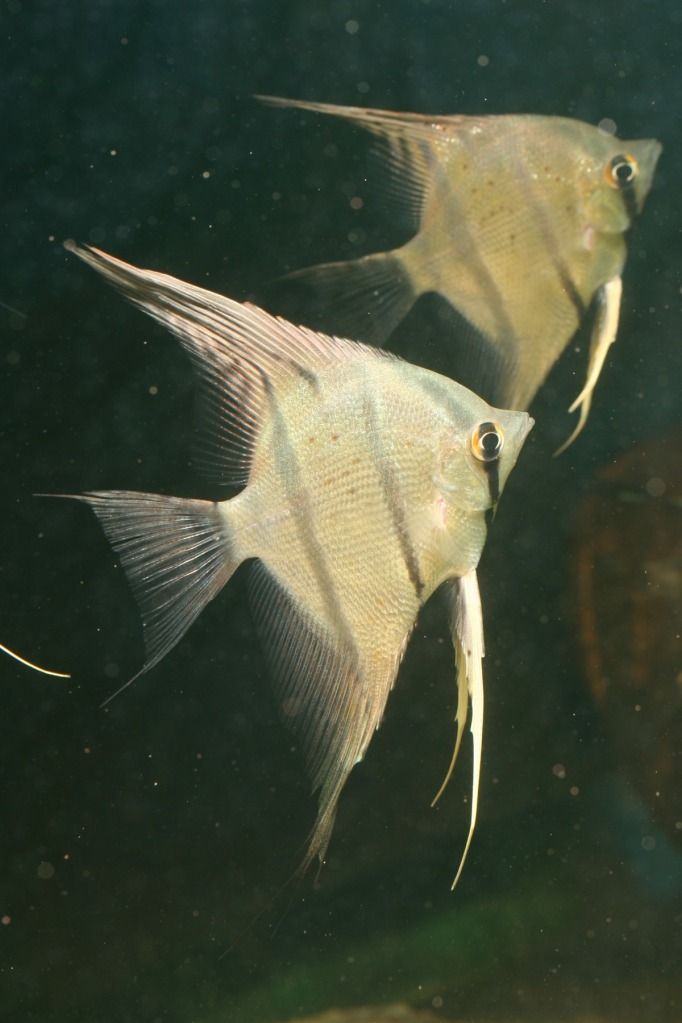 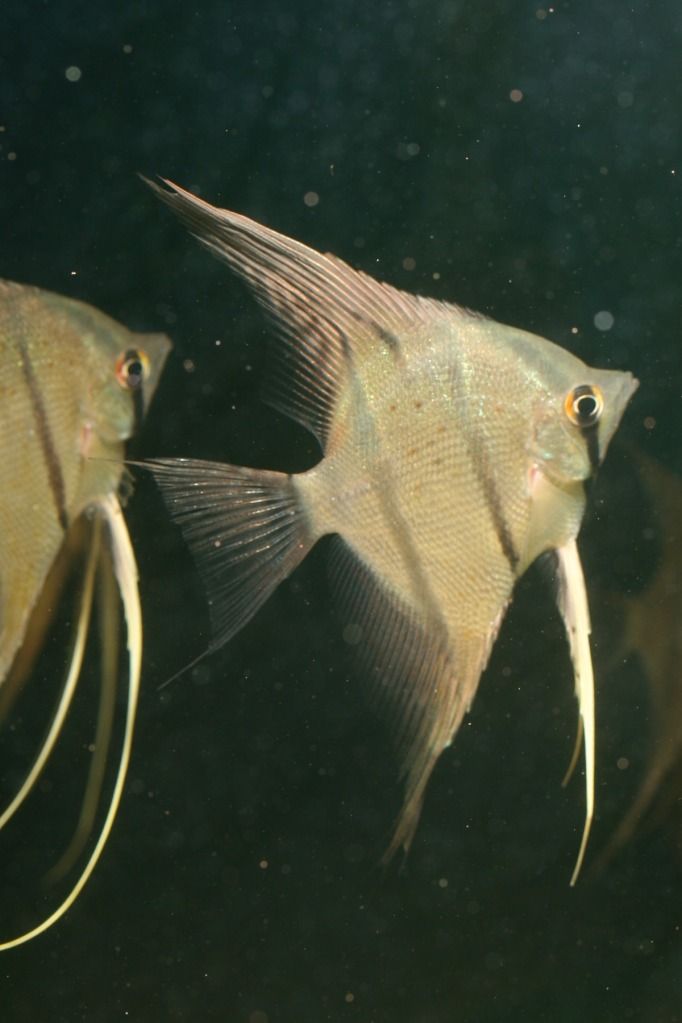 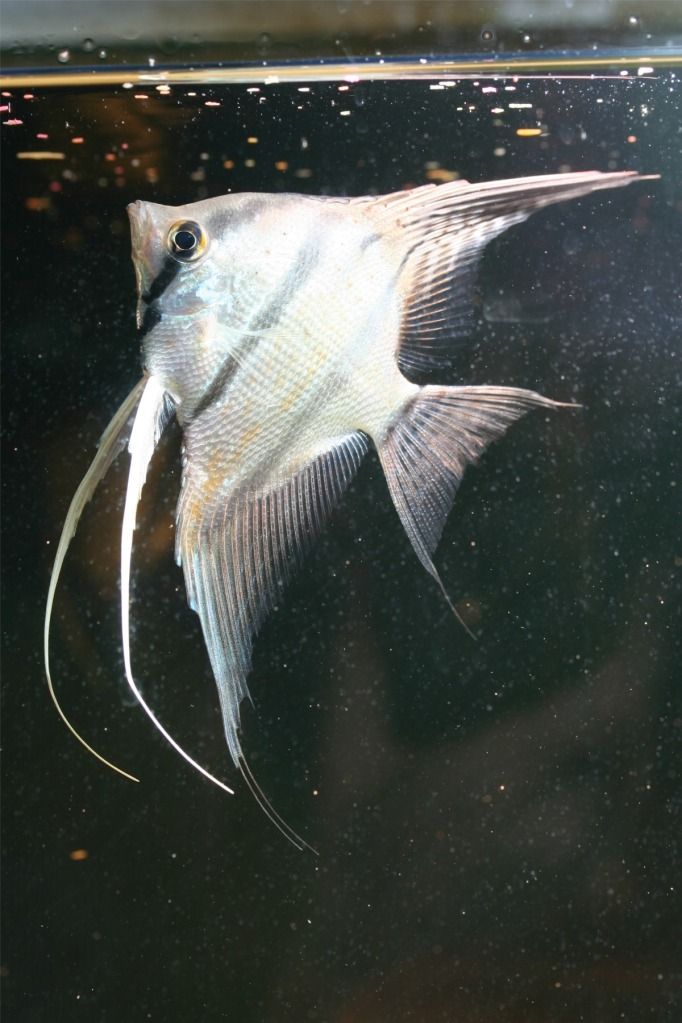 very nice indeed, would be nice to see s few more pics when they have settled and grown out

Rob
You know i like mixing wild with domestic. Is that what you intend to do to strenthen lines , or keep the wild strain pure. They look very healthy and nice red spots starting to develop allready. They will no doubt turn out to be nice fish.
Dave

You know i like mixing wild with domestic. Is that what you intend to do to strenthen lines , or keep the wild strain pure.

So far I have never managed to breed a wild angel, not that I've tried that often, and even my tank bred red backs have not really shown any interest, so at this stage getting one of them to breed with anything would be a bonus!

That said, I think the Nanay fish are sufficiently distinct from a domestic angel that maintaining a pure bred population of them would be good. They also have certain characteristics that would look good in domestic fish, specifically body shape and the orange patches that they develop on their flanks, that's something that I think could be worked on to enhance the colouration, it might also help to add colour to varieties like koi.

But for this to happen there is the important hurdle of getting them to breed to overcome first!
_________________
Blessed are the cheesemakers!

So far I have never managed to breed a wild angel, not that I've tried that often, and even my tank bred red backs have not really shown any interest, so at this stage getting one of them to breed with anything would be a bonus!

[/quote]
Hi Rob
One way i have found works especially if you have a group of wilds is , First get them to breeding size , feed them plenty of live food , then introduce a VERY WELL bonded domestic pair that are showing signs of spawning (tubes down etc) to their tank. The hormones have a tendancy to kick start the wilds.(shows them what to do

) You have to be vigilant because sometimes a wild male will try to hijack the gravid female and vice versa. Its worth a try anyway
Dave

I'll give that a try Dave,
Although my red backs are in a 5' tank with a number of domestic angels, who often seem to be spawning, they've really shown no sign of spawning at all. Although to be fair they never get live food, and only rarely get frozen treats.
I know Raiko suggested a similar approach.
_________________
Blessed are the cheesemakers!

I wish you all the best with those Rob they really are stunners.

They are settling in well... 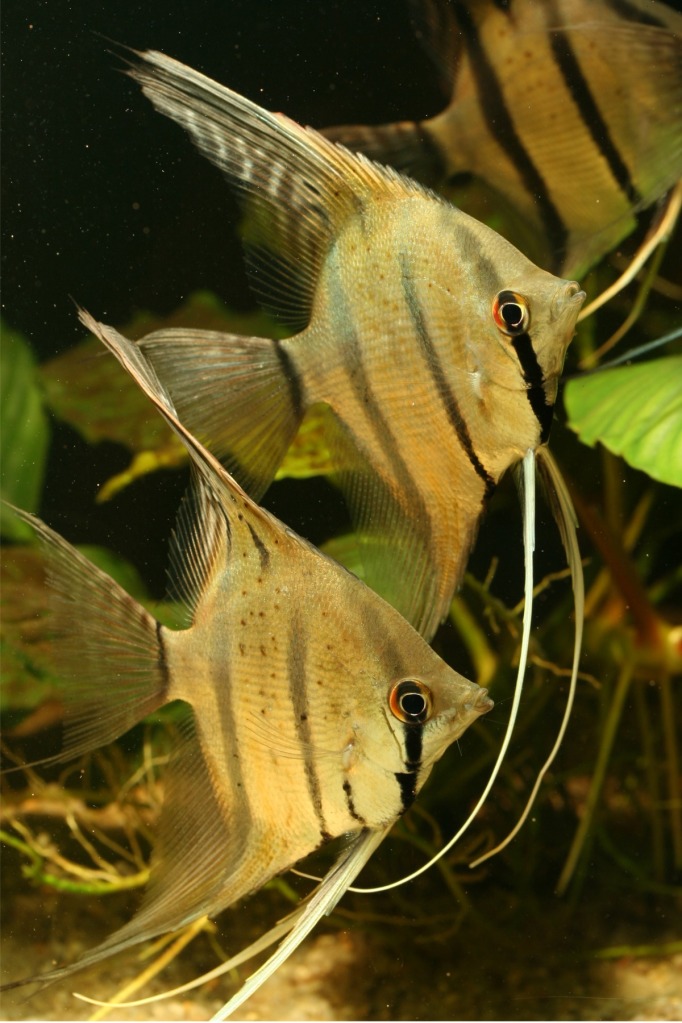 but they also seem quite argumentative and territorial, once I have a free breeding tank I think I'll pop a couple of big ripe females in and see what happens!
_________________
Blessed are the cheesemakers!

They really are stunning.

A friend has a group of 8 wild caught Angels and he said the same about them being so argumentitive. Obviously a trait that has been weakened in domestic Angels.