could someone please tell me what kind these are... thanks 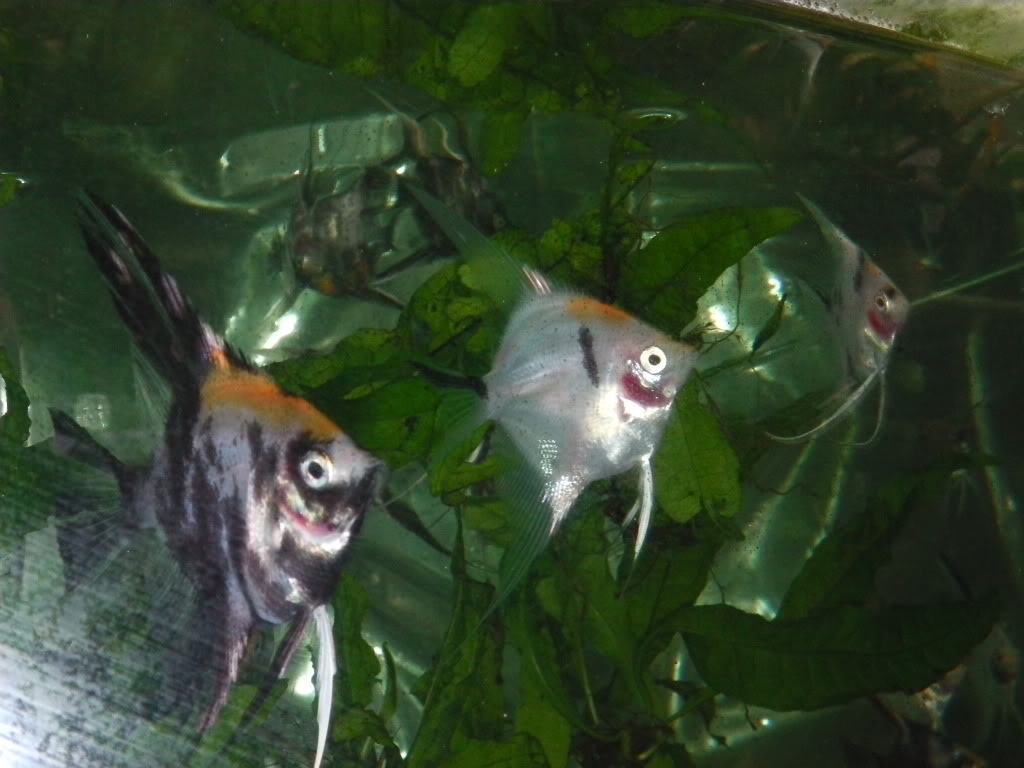 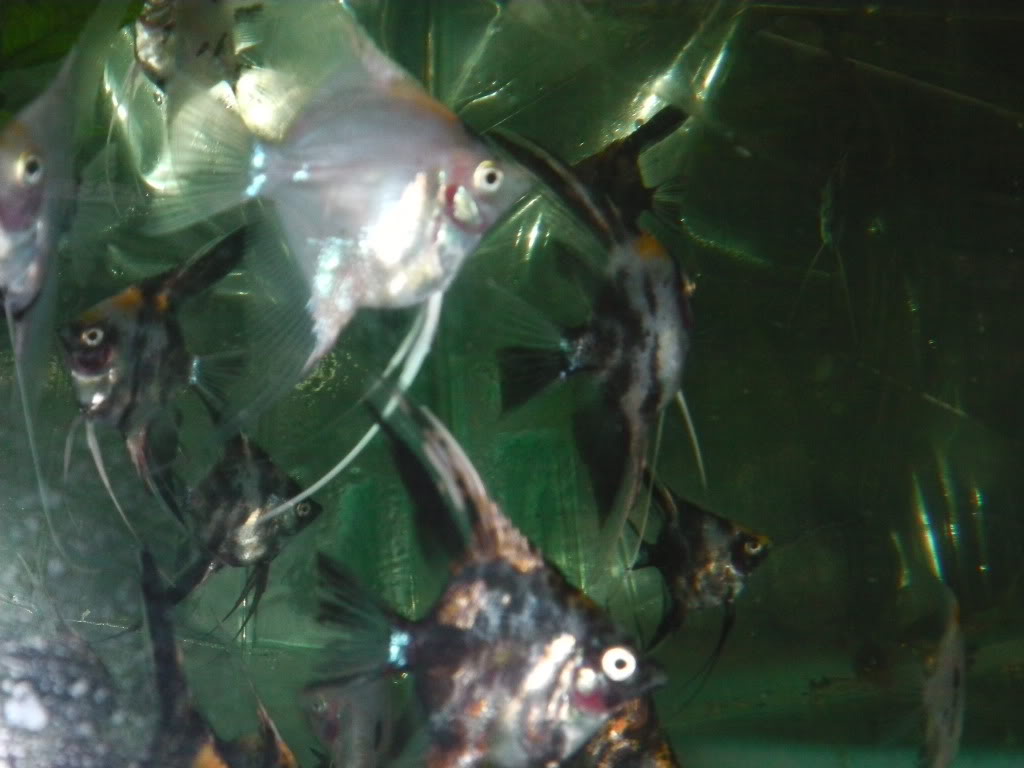 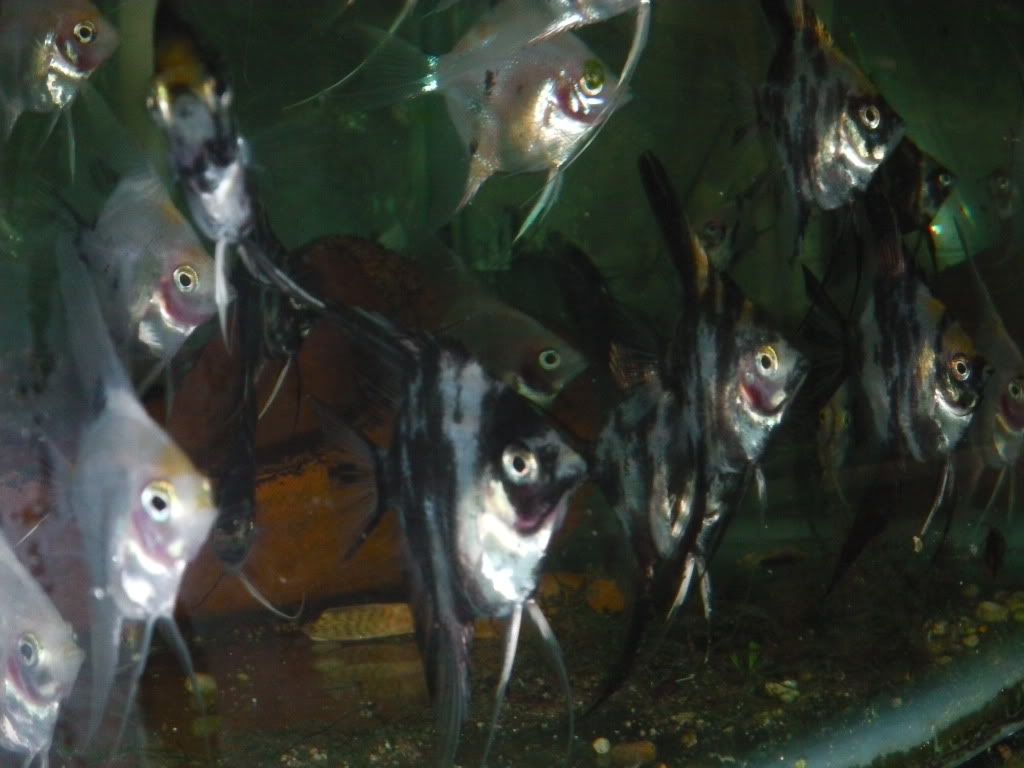 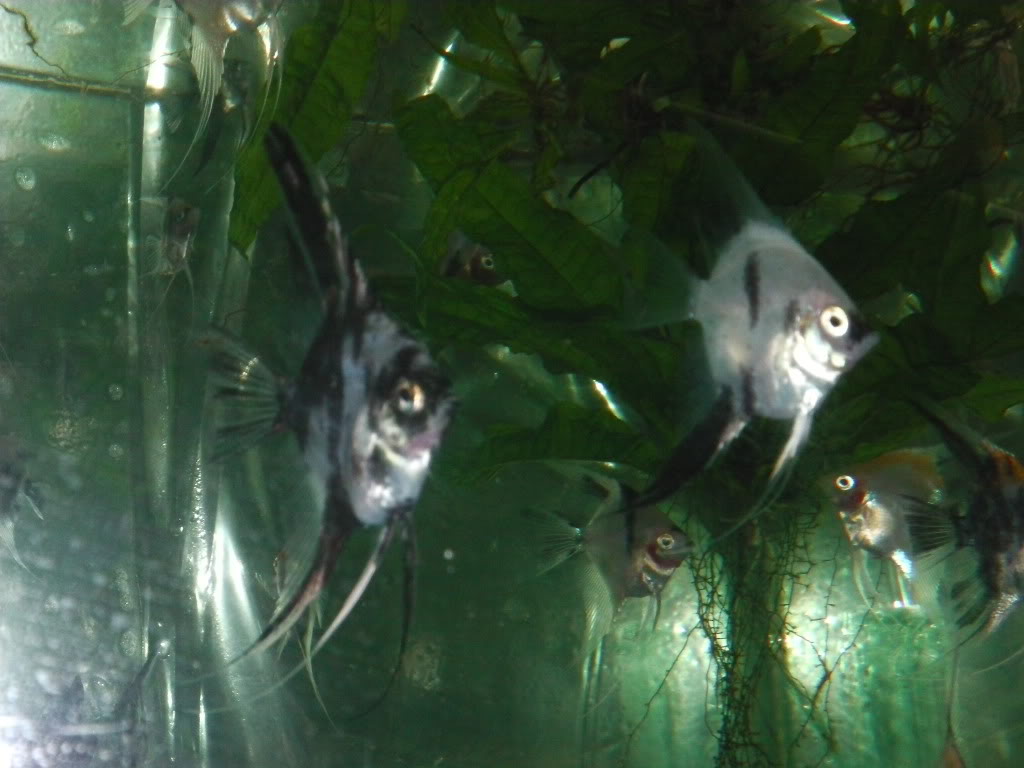 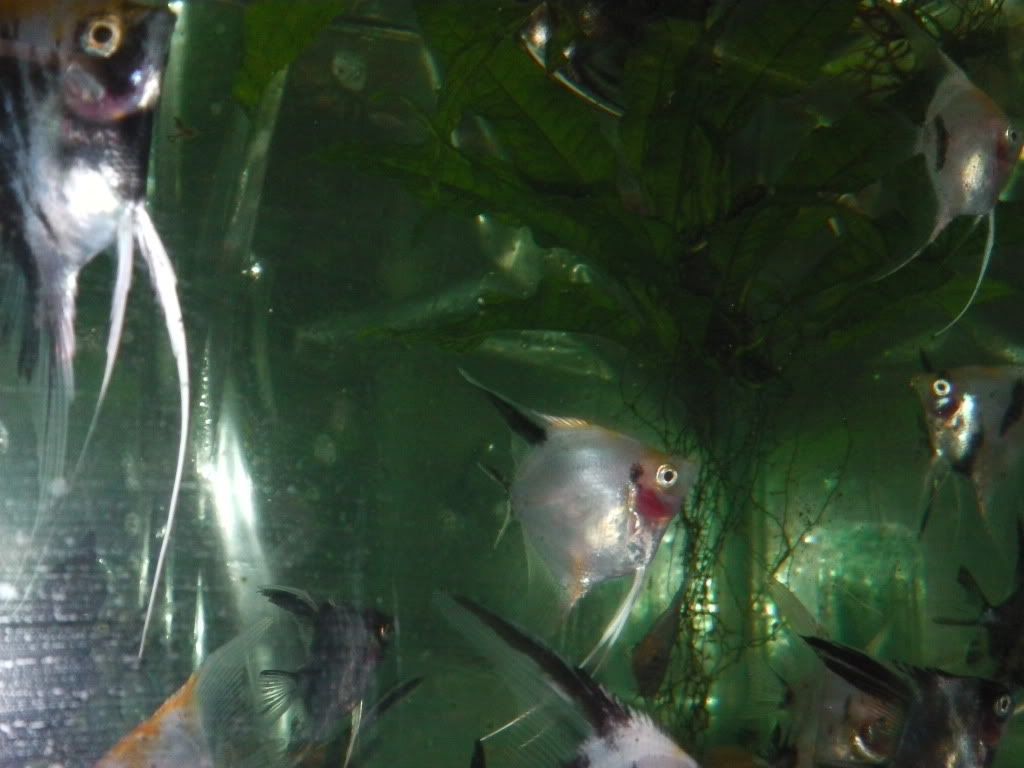 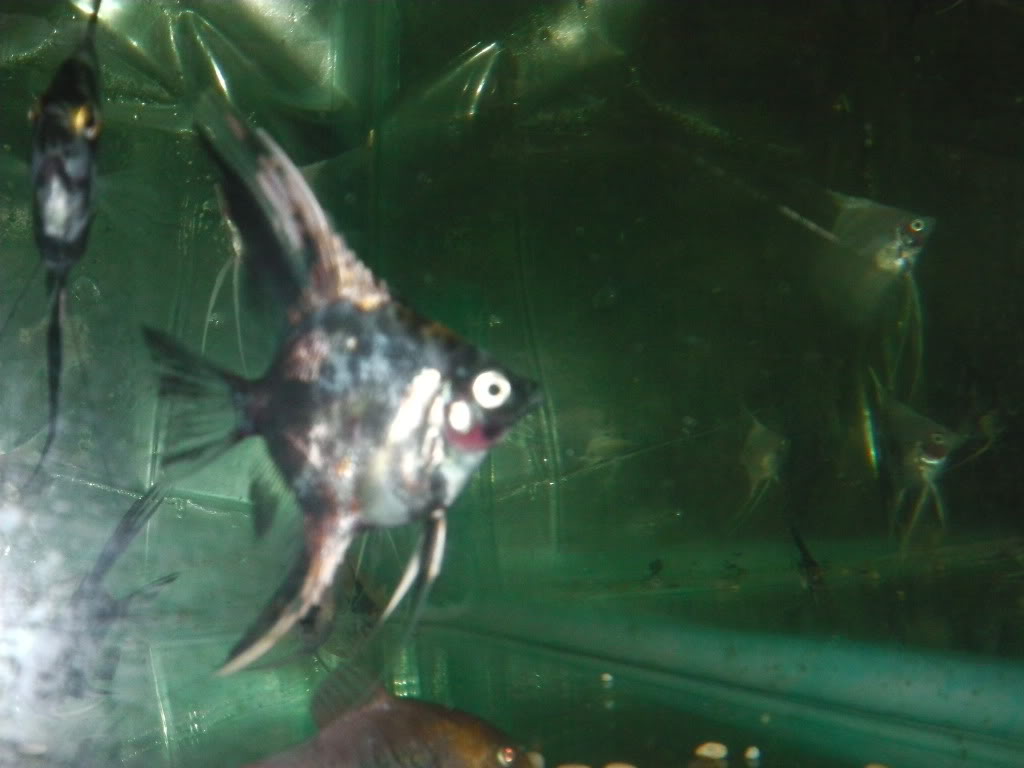 There are two marble genes, Marble (M) & Gold Marble (Gm), there is also a gene called gold (g), all of these genes are alleles which means that they are all different versions of the same wildtype gene (+) a fish can only have 2 copies of any set of alleles, so it could have a gold and a marble gene (M/g) or two gold marble genes (Gm/Gm), etc., but not M/Gm/g etc.
All your fish show some degree of marbling so they all have at least one copy of one of the marble genes. In general a fish with two copies of the marble gene (M/M) will have a very high percentage of black colouration with just a few small white/silver areas. A fish with just one marble gene and one wildtype gene (M/+) will show less marbling, whilst a fish with a marble and a gold gene (M/g) tends to be intermediate in colour.
Similarly a fish with two copies of the Gold marble gene will usually have more black patches than one with one gold marble and one gold gene. A fish that is homozygous for (has two copies of) the gold marble gene can look very similar to one which has one marble and one gold gene.
In short it can be very difficult to visually determine the exact marble form of any particular fish.

All your fish also appear to be "blushing", blushing occurs when a fish has two copies of the stripeless gene. A blushing gold marble is known as a koi, Koi can be either homozygous for gold marble (this is written Gm/Gm - S/S), or heterozygous (written Gm/g - S/S).

By comparison this is a gold marble (veiltail) 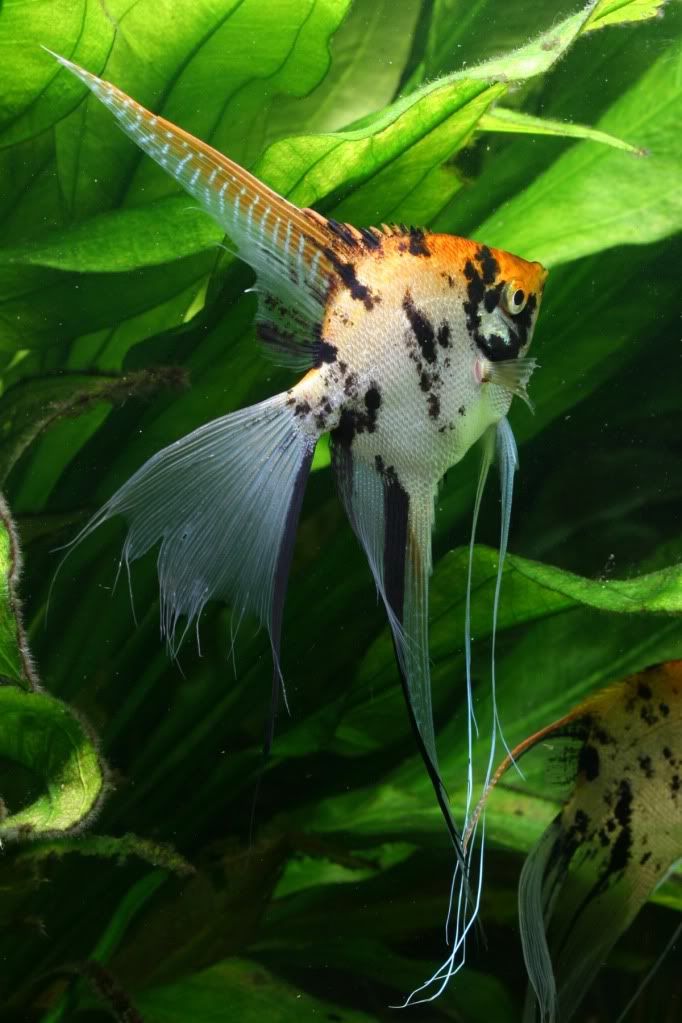 Some are harder to call, the fish on the left in photo one could well be a koi with two gold marble genes (Gm/Gm - S/S)
in fact he reminds me of this one, which I know is a koi.... 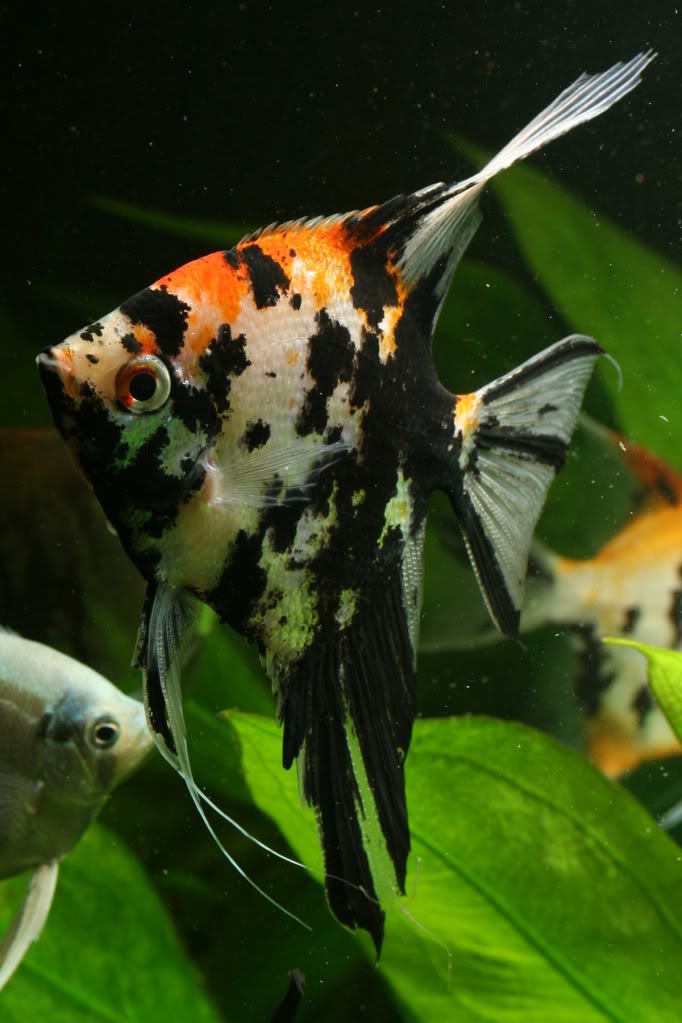 On the other hand, it could well be a blushing marble with a gold or gold marble gene.

thanks for that rob

a lot of these have blue shiny patches on them too, shame my camera didnt pick it up

a lot of these have blue shiny patches on them too

I wondered about that!

Are these fish that you've bred yourself? If so what were the parents, grand parents, etc. do you have any photos of them?

There is a gene called "Philippine blue" (pb), it's a recessive gene, which means that it's effect is only seen when a fish is homozygous for (has two copies of) the gene.

blushing fish have a matte appearance to the skin, with localised highly iridescent patches

These iridescent patches are caused by the deposition of guanine and can reflect a certain amount of blue even on fish without the pb gene, but blushing fish that are homozygous for pb can have extensive iridescent blue patches, such fish are called "Paraibas"

This is a paraiba smokey :- 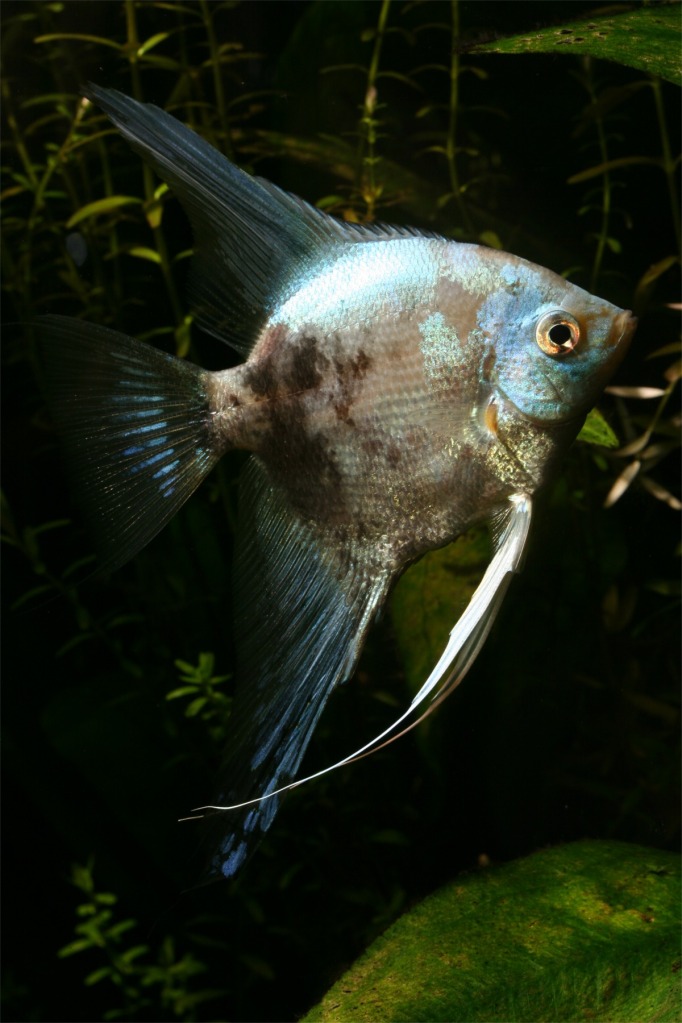 By comparison, although blushing this smokey has only one copy of the pb gene 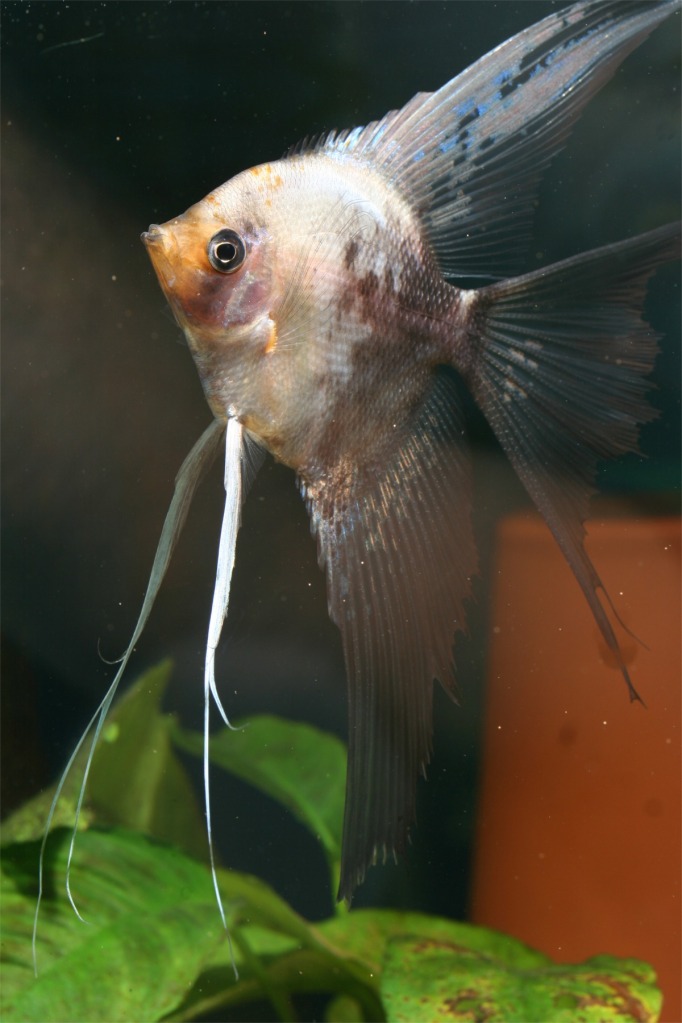 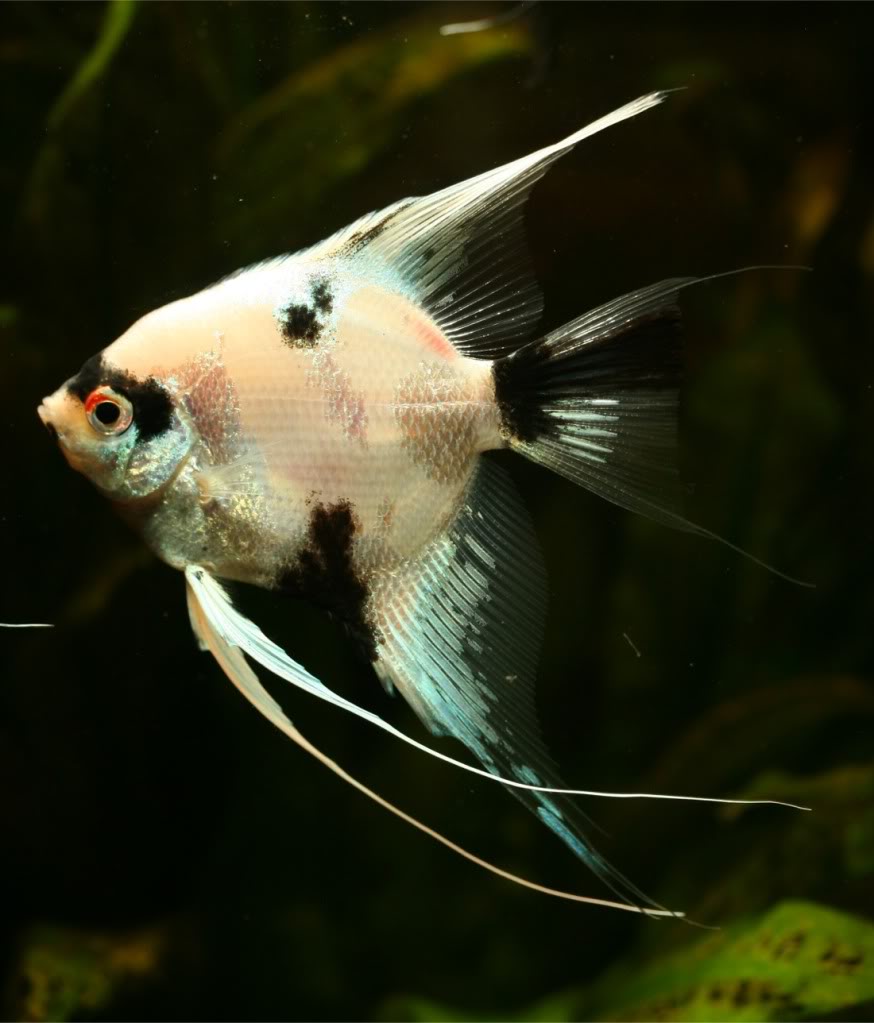 and a paraiba sunset 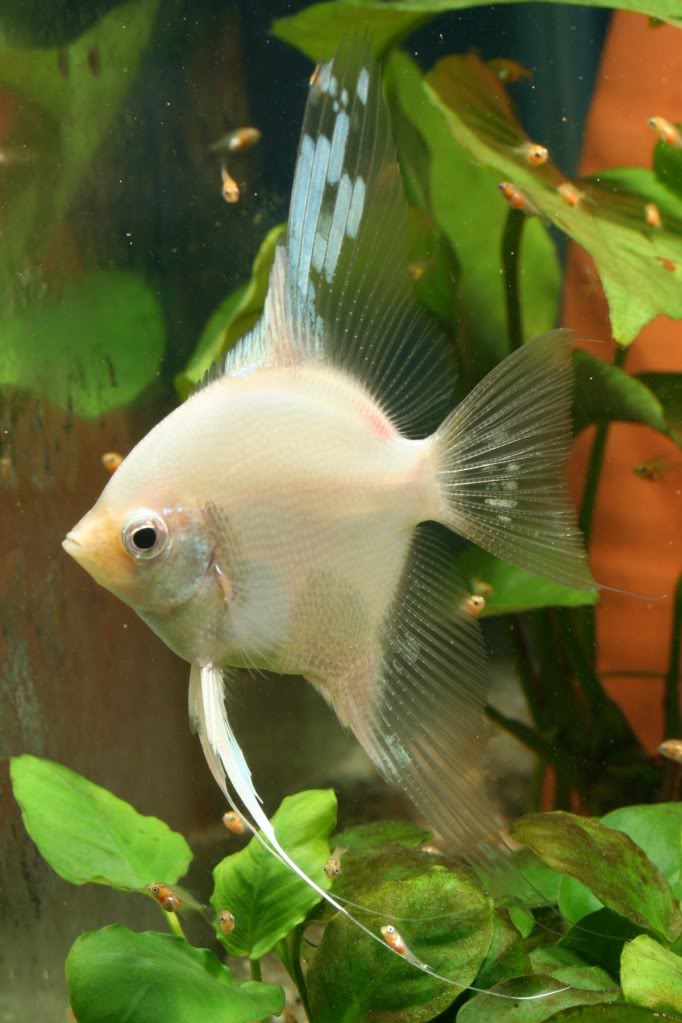 Grandma was (what i think) a turquoise clown, just like this one (this ones the male i got with her as a pair but shes died now 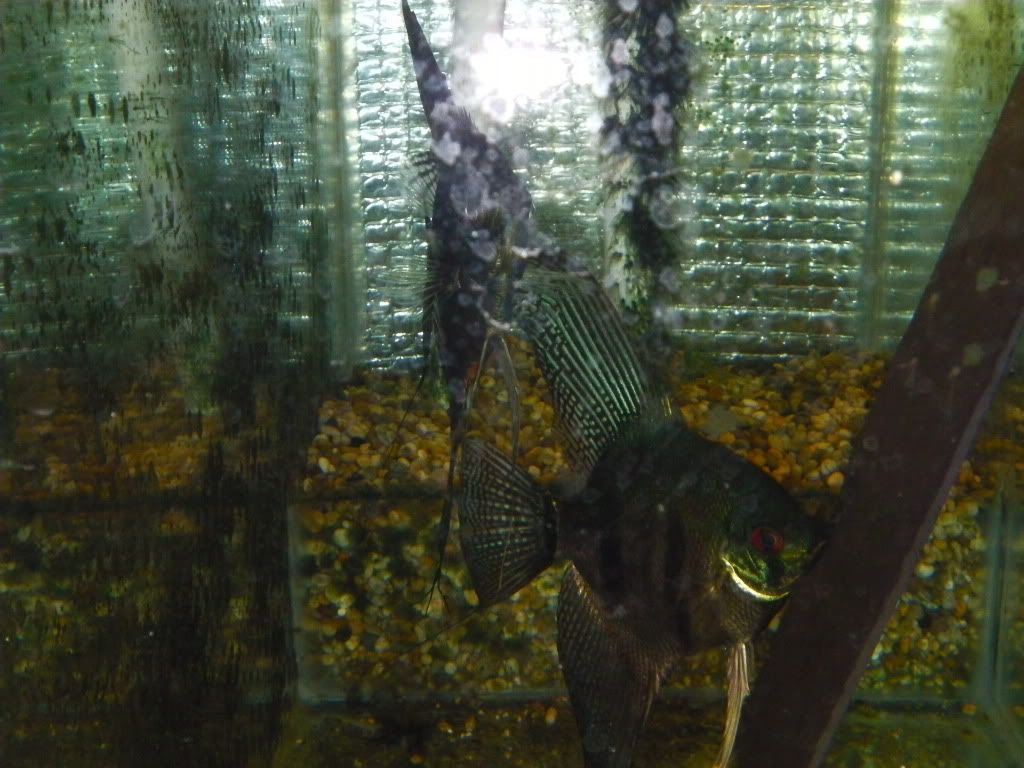 Dad was what came out of the above and looked like this (the last pic) but with a lot of blue patches, sadly the female killed him last week so i dont have a pic of him, he was the last of the aboves last spwaning that i kept cause he looked so good

Mun was a sunset (will add a pic of her soon, battery flat atm)

Could you tell me what these are too please 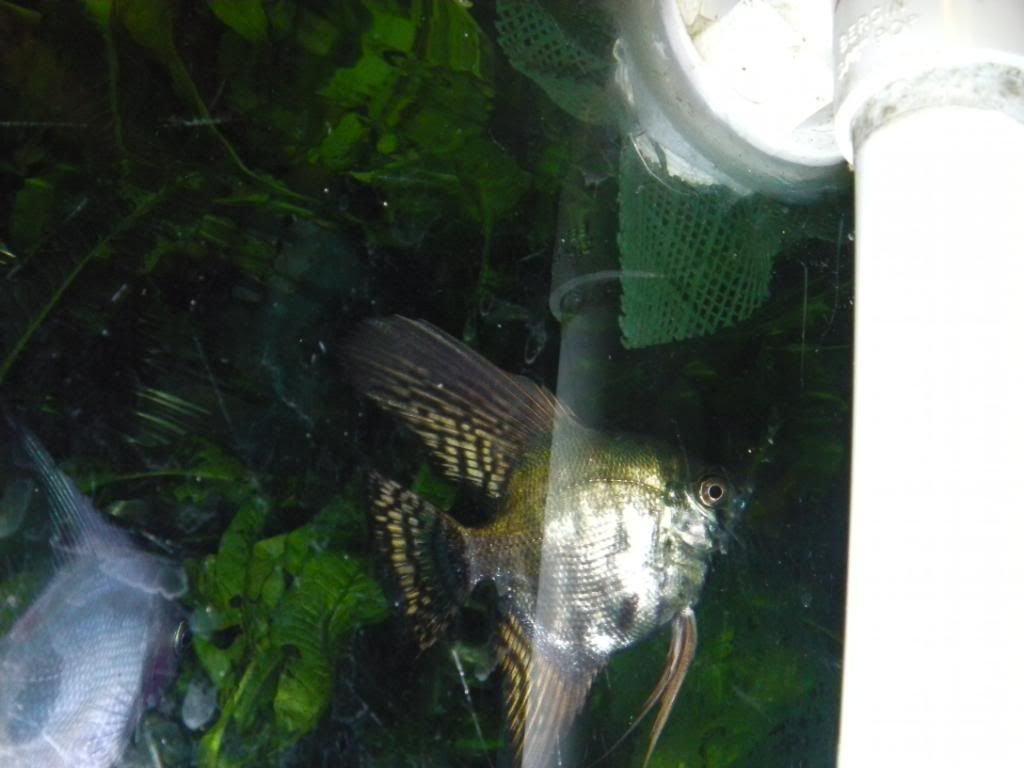 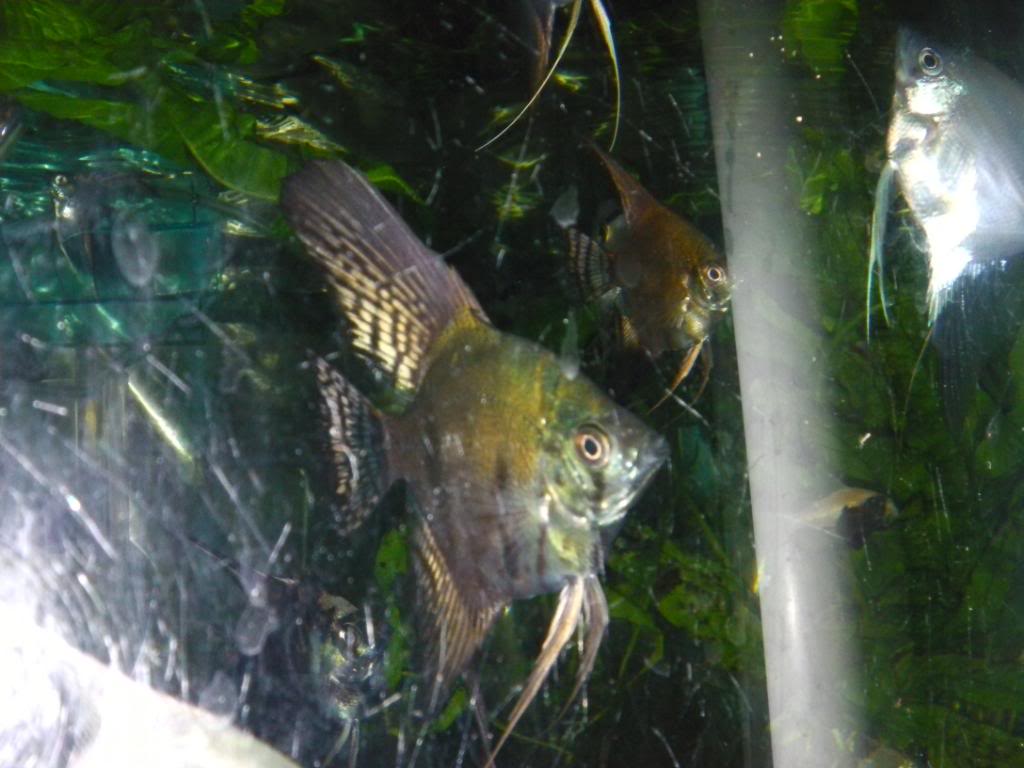 I know there's a zebra gene because of the pattern of striations in the dorsal, this pattern changes as the fish age, but essentially in a zebra there are usually more of the normal horizontal striations in the dorsal fin, in addition these become broken and chaotic, often running vertically as shown clearly in your photo of "Grandma's brother" in the previous post. As the fish don't have any obvious vertical body bands, it seems highly likely that they are clowns, a clown is a fish that has one zebra & one stripeless gene, the combination produces random dark blotches on the body. These days such a fish would be called a clown lace, lace being the name for a fish with one dark gene.

Fish with the dark gene are notoriously difficult to photograph, depending on lighting the colour can look too dark, too light or simply the wrong colour. Dark fish often show some blue, but the amount of blue/green shown by your fish makes me think they also have two copies of pb, a fish with at least one dark gene and two pb's is called a Pinoy. Making these clown pinoys, although I would caution that it's very difficult to be sure from a photo.

There is no formal system for naming angelfish varieties, and some breeders will often give fish names that others either don't recognise or, would use for a different variety. Turquoise to me means a blushing fish with two dark genes, but grandma's brother doesn't fit that bill, instead, I suspect it's what I'd call a zebra pinoy. Since some of Grandma's offspring were blushing, she must have had a stripeless gene, meaning that she was, quite possibly, a clown pinoy.

I don't have any decent photos of pinoy zebras/clowns, but this is smokey pinoy ghost (one stripeless gene) taken at about the same age as your fish in your last post.... 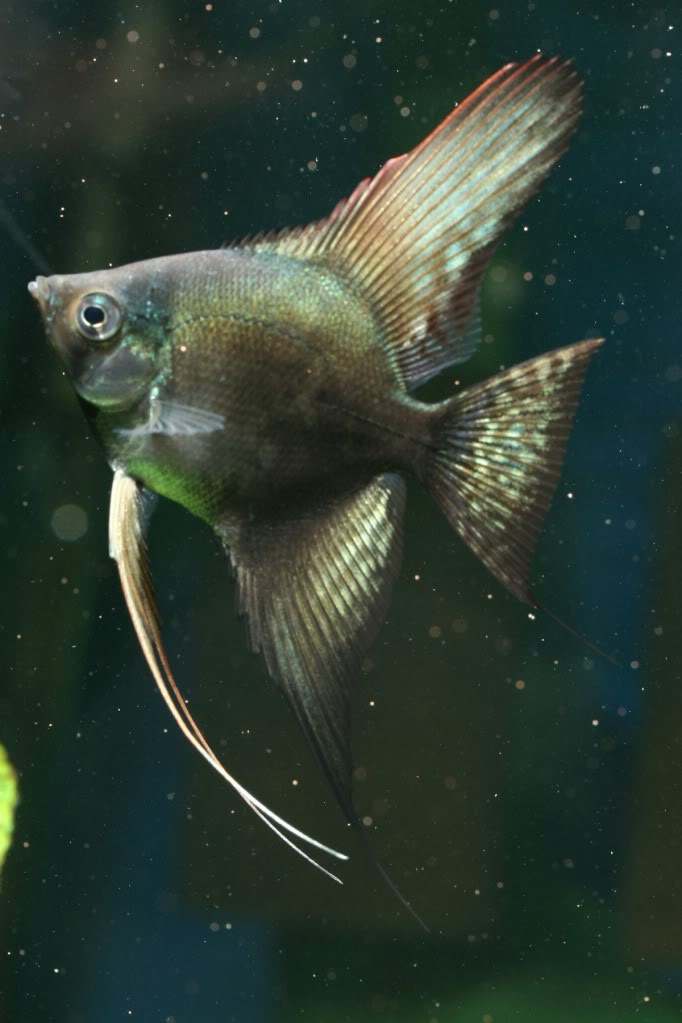 whilst this is a photo of the same fish, or one of his siblings as an adult 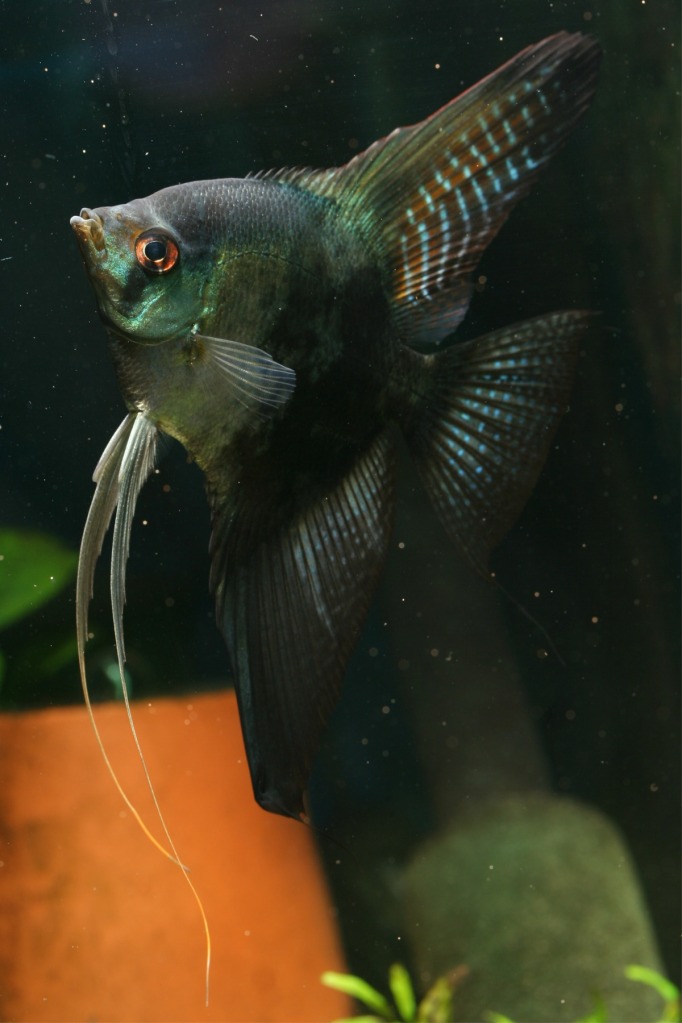