A few pics of my Angels.

A few pics of my Angels.

Just a couple of pics of my Angels.

First up is my group of 6 Blue Ghosts. After being a frequent reader here and finally deciding to sign up i believe they are bred by a member on here who works at my LFS. Unsure if he want's it broadcasting so will keep schtum until otherwise told so. Lol. 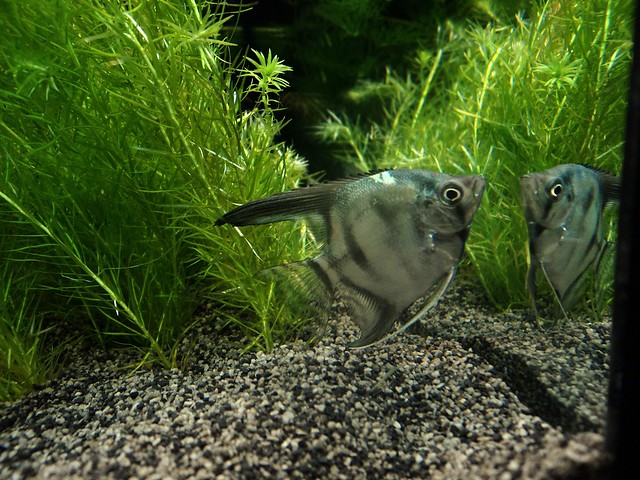 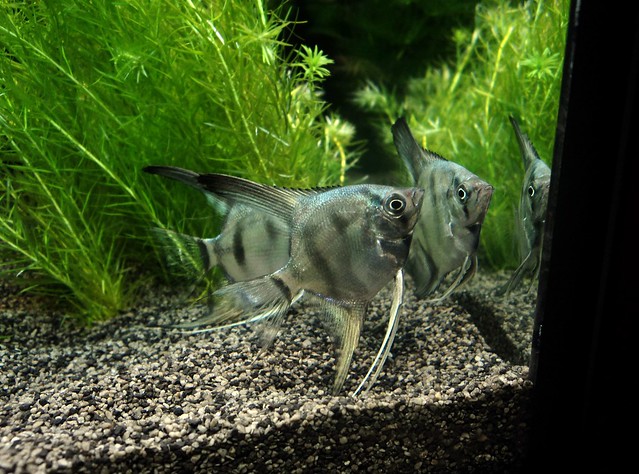 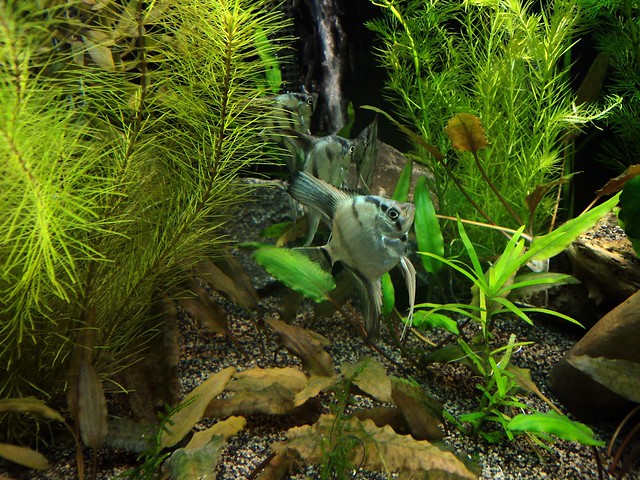 This one really shows their colours. 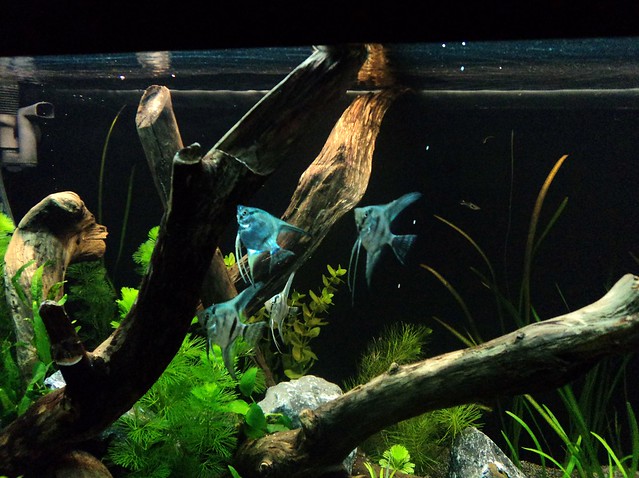 And my latest purchase is a breeding pair of erm... erm... Well, thats where i need your help. They were labelled as Koi's, but i think they're Gold Marbles?

(Not the best pictures, they're still settling in) 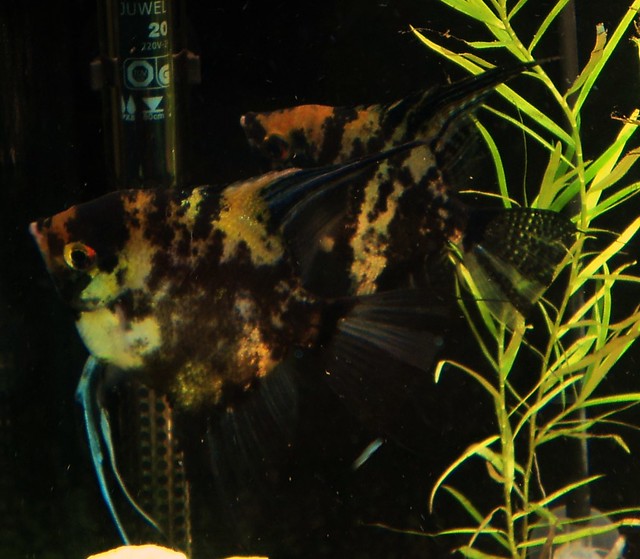 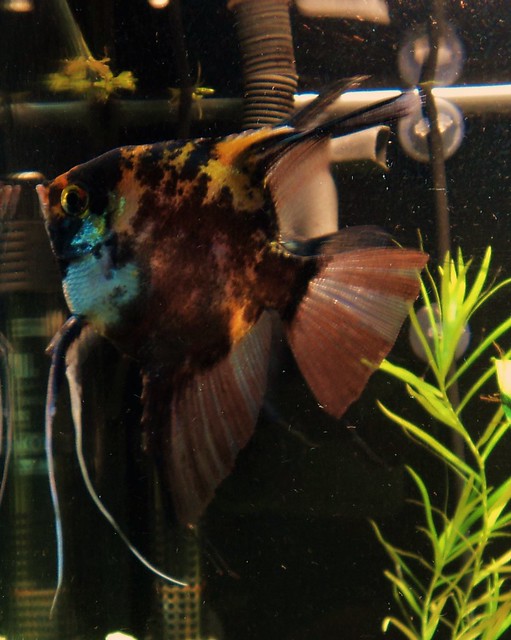 The Wood Pile Day 1 by David Raynham, on Flickr

So, if anyone can help me out then i would be very greatful indeed.

Hi David,
That's a very attractive set up you have there, once they've settled in those angels are going to look really great in their new home.
With regards to the pair...
A koi is a blushing gold marble,
The fish (I presume the female of the pair) in the front in the photos is a blushing angel, even 'though as an adult it's lost the red gills. You can tell this because of the absense of striations (horizontal lines) in the dorsal fin. It's not so easy to see the rear fish, but I can just make striations in his dorsal, what you can see clearly is the top half of his tail and you can clearly see a reticulated pattern in the black, by comparison the tail of the female is completely free of such markings.

So the male(?) can't be a koi because he isn't blushing. But even 'though the female is blushing, I don't think she's a koi.
There are two different marble genes, the newer gold marble and the original marble gene. These fish look like they have one marble gene (M) and either one gold gene(g) or a gold marble gene (Gm) ie M/g or M/Gm such fish are simply called marbles, ie marble blushing and marble. Very nice ones, Graham did a good job with all your new aquasitions!

Wow, thanks for a very detailed reply.

The fish at the front is actually the male and the fish at the rear is the female. They seem to be a little lost atm, but hopefully once they have settled they will be a little more active. Would be nice to have some eggs too, but no rush. Lol.

The tank has had many incarnations, but i think planted is its destiny... For now at least anyway.

And yes, he did a great job with them.

Hi David, welcome to the forum!
The blue ghosts should make beautiful fish, the father is a paraiba (with a few body stripes!) and the mother is a really good blue silver; some of the fry turned out pearlscale too.
I didn't get chance to look at the pair of marbles, they're not directly from me.... but looking at the pic the blusher could be one of mine.
Thats a really nice set up David, they should make a beautiful display!
Say Hi when you're in the shop again

Hi Graham. Thanks for the reply. Would love to see some pics of the parents. I believe i have some of the pearlscales you mention amongst my 6.

Was speaking to Ivan about the pair and he mentioned that you thought at least one of the pair was originally yours. Good to know they're of decent quality.

They are much more active now, and are due their first water change tomorrow. They're dealing with the Co2 system very well indeed. WIll hopefully snap a few better pics over the coming days and weeks. Managed to get one of the Keyholes that are sharing their tank. 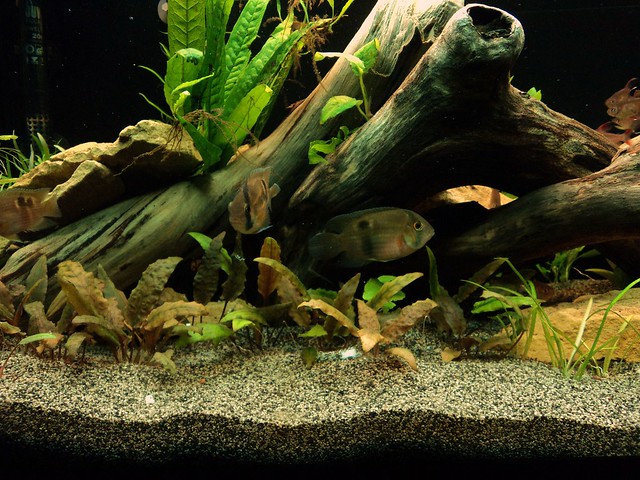 I saw on another post that you have a few Albino's. If and when you have any ready, be sure to give us a shout. They're simply amazing. Very different indeed.

Its nice to see keyholes, they're a fantastic little cichlid and a little difficult to come across atm. If I do manage to get some albino fry (and I really really want to!!) they'll be heading to the shop eventually, but I'll post the progress on here.

I've been asking 'you' (wharf) to get me some in for ages, but haven't managed to do so. Sourced these from your neck of the woods actually. There is a breeding pair and 2 juvies. The Blues are in with the trio of Nannacara you caught and sold me and a pair of Apisto's. Both have spawned, the Anomala have been at it non stop ever since i bought them, but nothing has ever come from them due to having a lot of hungry BN's.

Thinking of getting these two into their own tank soon.

Whats the best way to set it up for them? Just a bare bottom with some vertical surfaces for them to lay on? 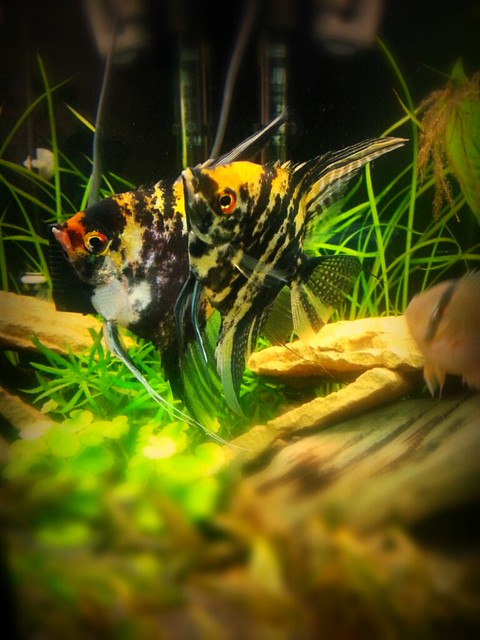 Personally, i feel that they are far more likely to parent raise if they feel secure & comfortable, for that reason I use fine (1-2mm) quartz gravel (sufficiently fine so that the babies can't get trapped in the gaps between the grains) an upturned flower pot as a spawning cone (with a marble on the hole to stop babies falling through!) and the tanks are planted with at least a couple of plants (amazon swords or Anubias seem to do well).
Others have success with a more clinical approach, but the above works well for me.

Thanks alot Pterophyllum. I think i will give them a go then.