Apparently it is common knowledge that Leopoldi's are the smallest angel. Here is the proof that that is totally false. These Leopoldis have been in this tank at the SF Aquarium for at least 5 years (I saw them there as juvies back in 2007), and visiting them last month they were easily bigger than the full grown adult scalares in this tank. Have a look.

So if you plan to keep Leos, go bigger on your tank than you would with a Scalare.

, and nice info.
Also a big warm welcome to the forum

The Leopaldi are very nice, but I like the look of those Gold marbles/koi too. Welcome to the forum
_________________
Blessed are the cheesemakers!

I have a slight problem with your statement, you have compared the wild leopoldi with a domestic scalare (fish which have been inbred for countless generations resulting in smaller sizes).

Here is a photo of just one of my adult P. scalare from Rio Negro. They are just under 4 years old now (this photo was taken at age ~3 years) As you can see, with the right conditions and right diet they achieve a size far larger than their leopoldi cousins. 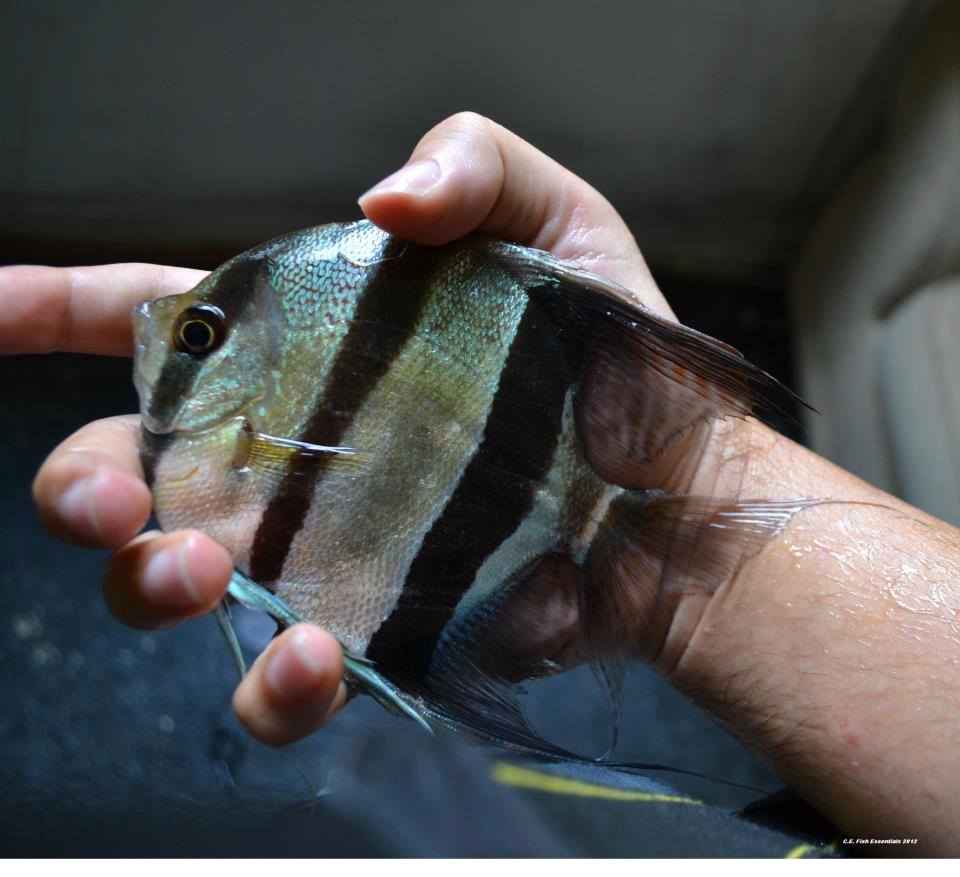 Pretty sure what you have in your hand there is an altum not a scalare. But point taken. Inbred angels may be smaller than wilds. In any case these inbreds didn't look 'stunted', and were as a big as any scalares I had ever seen. Still the leopoldi's were substantially bigger.

Could it be that there is still confusion regarding which fish are leopoldi and scalare?

@frothhelmet, the fish I am holding in the photo is P. scalare from the upper middle Rio Negro. I have observed P. altum in their native habitat in the Rio Atabapo and have seen real P. altum from both Inirida and Atabapo and they are quite different. If we ever meet, it'd be great to discuss in finer detail and I can show you. :-) But here is a recent article I wrote about it: http://cefishessentials.com/blog/rio-atabapo-chris-englezou/

@Phill, If you judge by the aquarium / domestic strains then there will always be confusion because they all stem from hybridisations of the two species. But the natural forms are quite easy to differentiate, my only knowledge of any confusion is in the region of the Rio Demini and Rio Padauari where an 8 barred angelfish can be found which appears somewhere between P. scalare and P. leopoldi (perhaps the result of age-old hybrid speciation), the rivers are conveniently situated between known populations of P. scalare and P. leopoldi so who knows... an interesting idea..