Marbles have always been one of my favourite angel varieties, so I've wanted to breed blue marbles from the moment I saw photos of some of Ken's blue varieties.... 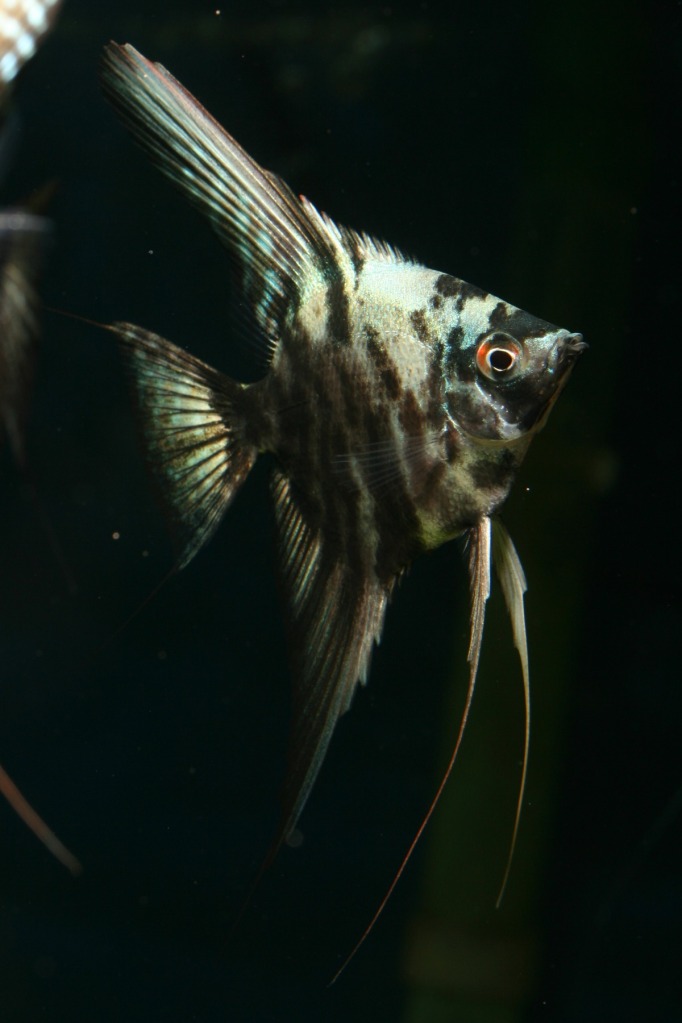 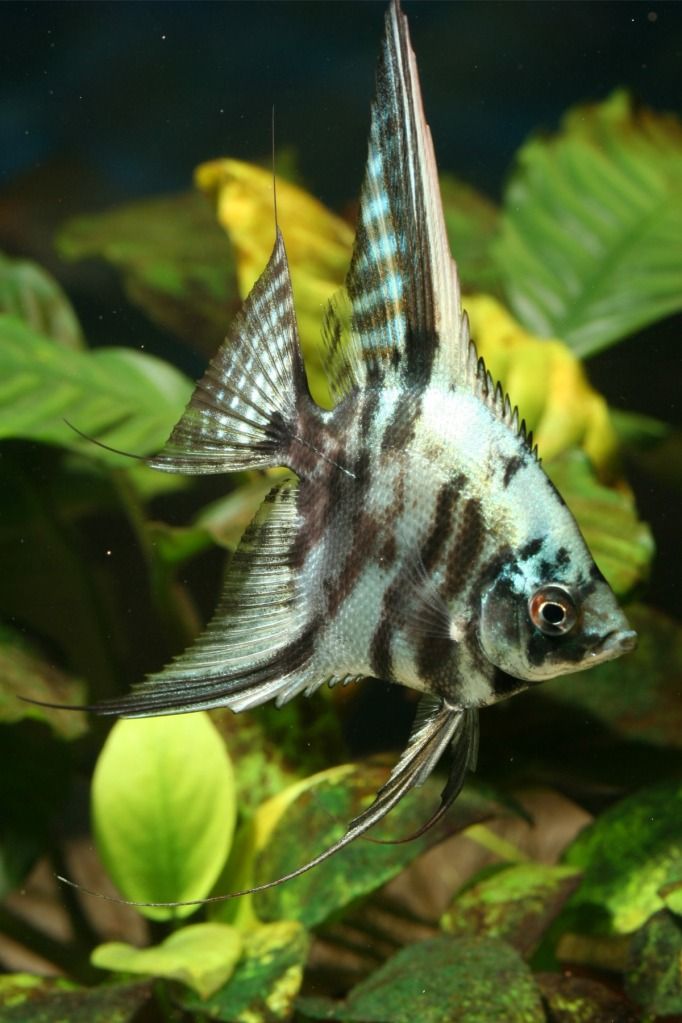 but I've got about 40-50 of their younger siblings 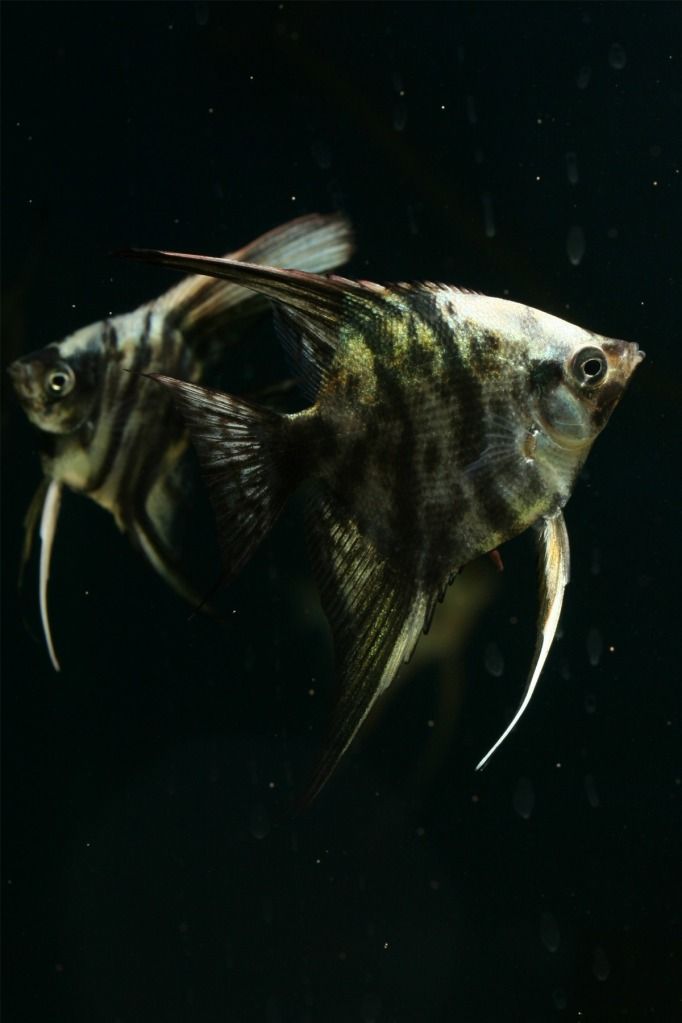 These are their cousins who went free swimming today, there should be a few more blue marbles amongst them! 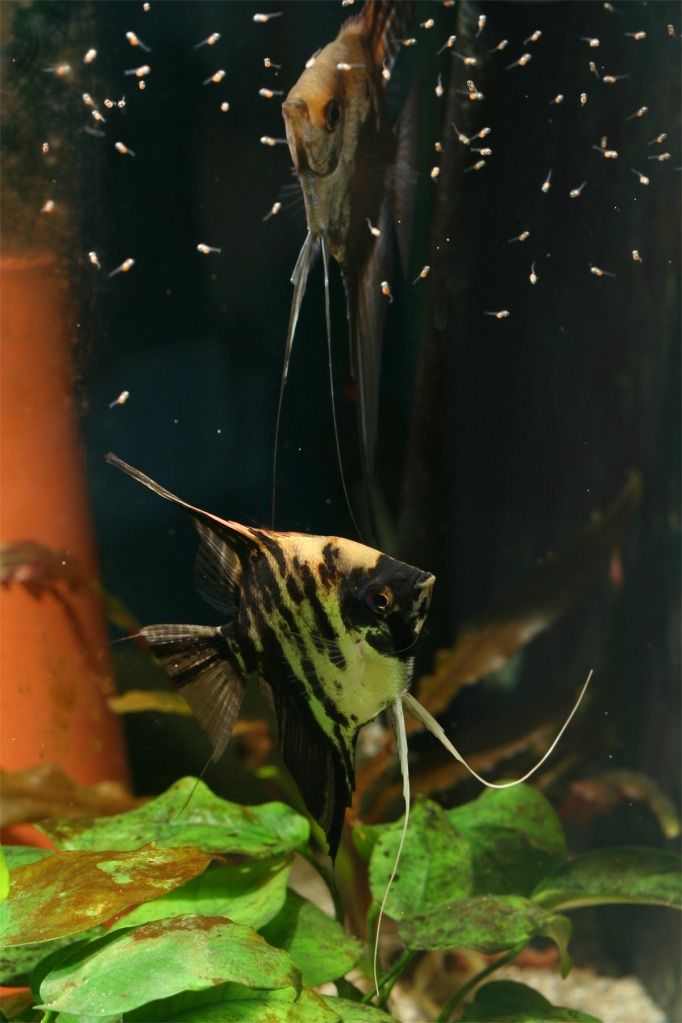 They are sooooo pretty Rob, I'm not surprised they are one of your favourites. So their code would be Gm/Gm- pb/pb?

With all those babies you'll soon have more than two! Happy days.

Stunning as usuall Rob. I love the Blue Gold Marbles mostly & have got a load freeswimming

I must agree with Helen they are very nice looking angels, but there was so many M/+ - S/+ - pb/pb etc I had to go lay down in a dark room, I don't think I was cut out for angel genetics but I know what i like and these are stunning.

It can seem very daunting when you first look at it, but it's actually very simple once you know what each refers to,
each letter is simply an abreviation for a particular gene. So M/+ means 1 marble gene and one "wild type" gene that corresponds to it. In other words, marble is a mutation, an aberant version, of a gene; whilst + is the normal version you would find in a wild fish. There are 3 other known mutations of this gene, Dark (D), gold (g) and Gold Marble (Gm). A fish can have just two copies of any particular gene, so a fish could be D/D, D/M, D/Gm, etc. but not D/Gm/g.

Similarily S stands for stripeless, but this is a mutation of a different gene, found at a different location (Known as a gene locus), probably on a different chromosome. Apart from the unmutatated wildtype gene, there is one other version of this gene, Zebra (Z). A fish can be S/S, Z/Z, S/Z, Z/+, S/+ or +/+ at this particular locus, but it can't be M/S because marble is found at a different locus.
It is however possible for a fish to have both a marble and a stripeless gene, this is written M/+ - S/+ with the hyphen used to seperate the genes on the different loci.
So, at the risk of making your head spin further! M/+ - S/+ - Sm/+ - pb/pb translates as 1 marble gene, 1 stripeless gene, 1 smokey gene and two philippine blue genes.

It can seem very daunting when you first look at it

You Are The Master of genetics Rob!
Dave

I'm glad you've finally got some fantastic blue marbles Rob, it's a great feeling to achieve a goal. Are you planning some selective breeding now to try and increase the blue further? Maybe the addition of the zebra gene?

baldyman wrote:It can seem very daunting when you first look at it

You Are The Master of genetics Rob!
Dave

You will get the basics eventually. I mess about on a genetics calculator and find this has helped.

Let's start with the £1 coins, toss them both 20 times and write down your results
Each time you toss them you will get either 2 Heads, 2 tails or one of each.

or you could write this down as

If you count up your results you'll probably find that you have roughly 5 sets of H/H, 10 sets of H/T and 5 sets of T/T.
This is because there is only one way to get H/H (if both coins land on heads) and similarily only one way to get T/T (if both coins land on tails), but two ways to get H/T, coin 1 H : coin 2 T or coin 1 T : coin 2 H.
Now imagine you have a pair of marble angels, each of them has a marble gene (M) and a wild type gene (+) what will happen if you mate them? Each fish will be able to pass on either a marble gene or a wild gene to each of their offspring, but as each offspring gets one gene from each parent, each offspring will end up with 2 genes like it's parents, The possible combinations being M/M (a marble gene from both parents); +/+ (a wild type gene from both parents) or M/+ (a marble from father and a wild from mother) or M/+ again (but this time the marble gene came from mother and the wild gene from father)

now do the same experiment with the £1 coins and the 50p pieces, but you need keep records for £1 coins and 50p's seperately, so write the £1 coins first, followed by the 50p's and put a hyphen between them e.g.

You'll notice that you've probably got much the same 1:2:1 ratio of H/H : H/T : T/T in both the £1 coin and the 50p columns, but, unsurprisingly, there's no linkage between them; so if the £1 coins landed on H/H the 50p's could be H/H, T/T or H/T.
This then is analogous to mating two fish each with one marble and one stripeless gene.

In both of these examples we've used coins that are heterozygous, that is to say they have two different sides (genes), but some of the offspring were homozygous (having two genes the same), either Homozygous for heads (H/H) or homozygous for tails (T/T). So what would have happened if you'd used a double headed coin? Obviously the coin would always come down heads. The same happens with angelfish, a fish that's homozygous for marble (M/M) can only pass marble genes to it's offspring, mate it to a fish that's homozyogus for wildtype (+/+) and all the offspring will be heterozygous (M/+).

Most angelfish mutations exist at different locations to all other known mutations, so for most it really is as simple as heads or tails where the choice is between heads (the wild type) or Tails (the mutation) .
With some coins the royal mint produces special commemorative versions, these coins always have the same head (wildtype), but the tails (mutation) can exist in different forms. In angelfish this happens at the Dark locus where there are four known mutations (Dark, Marble, Gold Marble and gold) and at the stripeless locus where there are two (Stripeless and Zebra).

For simplicity lets look at the stripeless locus, and we start with a fish that's S/+ (has one stripeless and one wildtype gene) and mate it to a fish that's Z/+ (ie it's got one zebra and one wildtype gene) what will happen?
This then is analogous to tossing two different 50p's, this year there are lots of different 50p designs commemorating the olympics, so lets say we use a "swimming 50p" and a "boxing 50p"
when we repeat our first experiment we now discover there are 4 different types of offspring :-
Heads/Heads, Heads/Swim, Heads/Box, and Swim/Box
with the fish the same is true, +/+, Z/+, S/+ and S/Z offspring are produced.

So there you have it, genetics is as simple as tossing a couple of coins. Admittedly there are some special circumstances where things can get a bit more complex; and a big challenge is relating the appearence (phenotype) of the fish to its genetic make-up (genotype). The challenge is knowing which commemorative coins (mutations) exist and in which denominations (which locus they are found on).

Are you planning some selective breeding now to try and increase the blue further? Maybe the addition of the zebra gene?

That may well happen as I already have marbles that are het. for pb and have a zebra gene, but my next target are paraiba marbles. As some of these youngsters will have a stripeless gene that shouldn't be too far away!

it's a great feeling to achieve a goal.

Yes, I'm really pleased with all the youngsters that this particular pair produce,
I get, silvers, silver ghosts, smokeys, marbles....
and the same again in blue.

Usually having bred from a pair a couple of times I want to move on to another pair, split them up and re-pair them or move on to breeding from their offspring, but with this pair, if I had the space, I'd happily just keep breeding them time & time again!
_________________
Blessed are the cheesemakers!

Can I use this on one of our new site pages that are in the making?

Great explanation Rob as useual you have done it again.That is what i would call Genetics made simple or as simple as it can be,thank you.

Thanks for taking the time Rob. Realy simple way of getting the idea across.
( only thing now is every time i see a pound coin or fifty pence piece im thinking of angelfish

Thought I'd show off one of the younger blue marbles 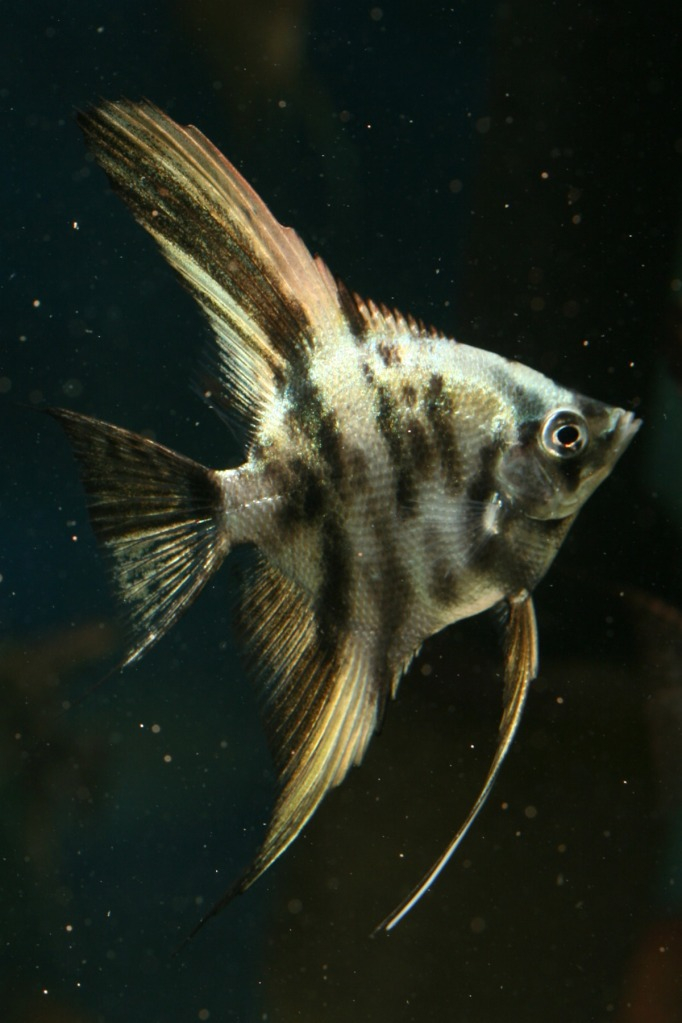 The mother of these blue marbles is a blue smokey ghost, and one of my favourite blue smokeys.... 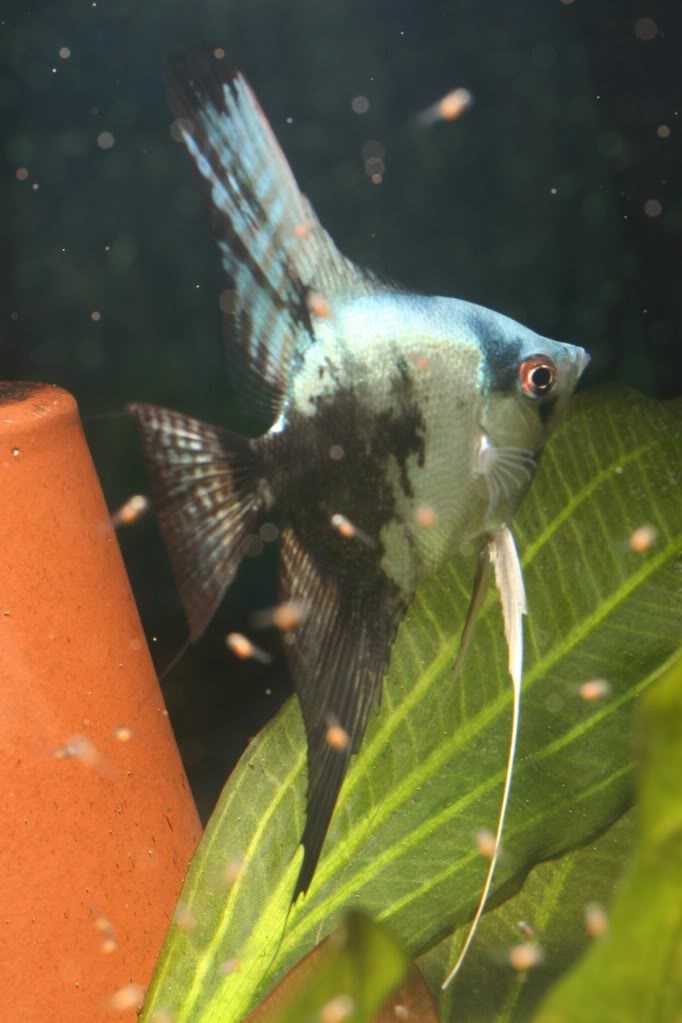 I'm pleased to see that some of the smokey blue siblings are taking after her... 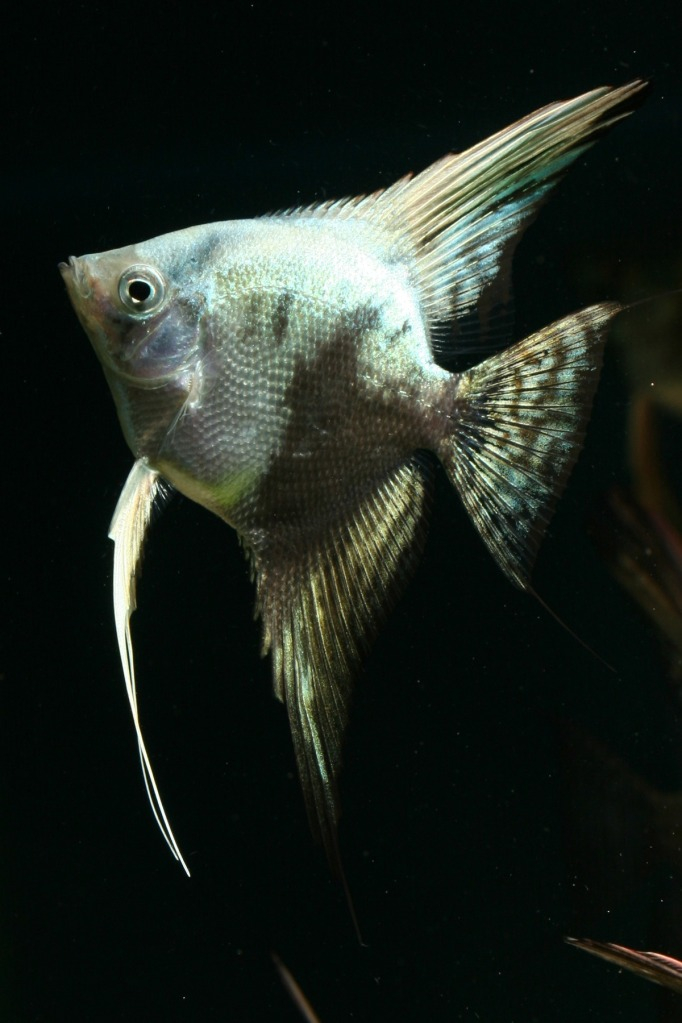 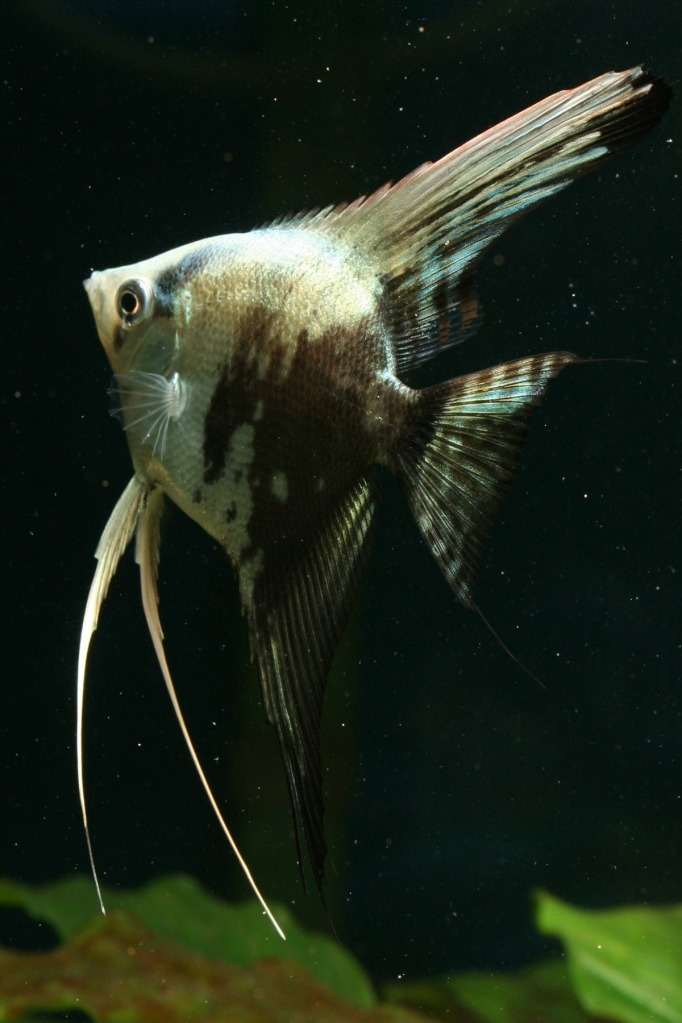 She's gorgeous. What was dad? You've probably already said, but you'll have to refresh my memory as I can't find it in the thread.