Hi All i am looking for some Blue Marbles (M+ if poss) to go with the rest of my blues i am looking for around 6 fish but any amount would be better than none aged from about 5 months up to adults.So if you have any you would like to sell please let me know.
I am also looking for a pair of Platinums or 2 females of breeding age.I am willing to travel for the right fish if you are unable to post.
Many thanks
Paul..

Hi Paul,
I haven't forgotten you!
The ones I have are just about 4 months old now, but blues tend to be slightly slower growing than standard and I'm not quite ready to part with them yet, hopefully should be available in about 3 weeks time.
As to a pair of platinums, would platinum marbles be of interest?
_________________
Blessed are the cheesemakers!

Hi Rob,I'm happy to wait for the right fish & yours are the right fish.Haveing been inspired by yours i mentioned the fact that i was looking for some to a freind who breeds Discus & he put me on to a guy down here in london that has bred some Blue Marbles of which some are veils & had already paired up,so after contacting him i arranged to go & have a look as they sounded very nice & at a great price,but as the saying goes (if it sounds to good to be true it probably is) well needless to say it was,when i got to the guys home in North london he told me to wait by the back gate so he could put the dogs away, he then appeared & took me through to what he said was his fish house,well once in i couldnt believe my eyes as he had around 100 tanks with all sorts of fish but the tanks were in the worst state i had ever seen,Ie water levels to low so fish could barely swimm,tanks were so green you could hardly tell what was in them & fish floating dead in most which was hardy supprising,after walking past some very sorry sites he showed me what clearly were Blue Marble Veils but they where so thin,garsping for air & very tatty with hardly any fins left i quickly said thanks but no thanks & left.Once out of there i rang my freind & asked if he had ever been to this guy & was told no but he had seen this guy advertiseing in a freeads paper,so being an animal lover i just had to phone the RSPCA & report him,i was informed by the inspector that visited him that he has been closed down & now waiting to attend court.So i thought i would ask people who care for there fish & put my wanted add on here wishing i had just waited for you in the first place & yes Rob Platinum Marbles would be of interest as i have 1 already & she is looking for a mate....Sorry for waffeling on but this guy really shocked me.

Hi Paul
Just read your reply to Rob and well done mate if more people did what you have it would get rid of
all the bad breeders that do not put the time and effort in to keeping the fish as they should be kept.
Giving all us good ones that put a lot of time and effert and money into breeding good fish a bad name.
once again well done, I also hate fish being posted thrown around like any other parcel.
cheers Tony

Hi Paul,
This particular batch the male was a chocolate pearlscale with a hidden gold gene. He's the brother of the mother of my albino baby so there's a 50:50 chance that he, and therefore some of his offspring carry an albino gene.
Because both parents were only heterozygous for pb only 12.5% of the offspring are blue marbles and only half of those are M/+ rather than M/g's.
As I said in my previous post blues tend to grow slightly more slowly, so although I've already started taking some of the normal marbles to the shop, most of the blue marbles are still a little on the small side. Just to whet your appetite however, here are a couple of photos of some of the larger ones.... 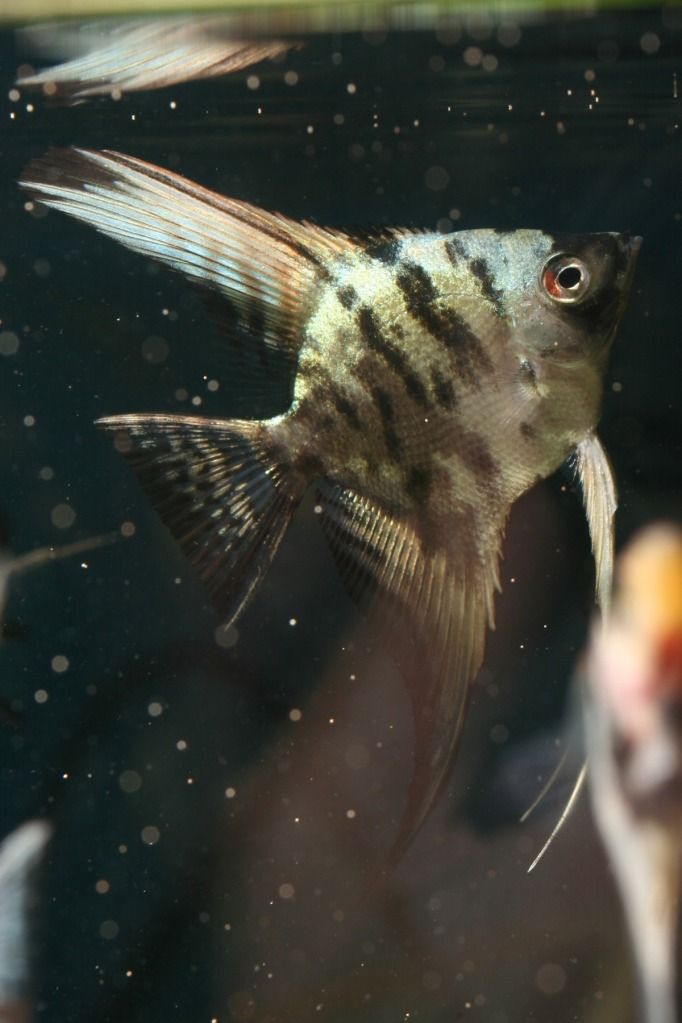 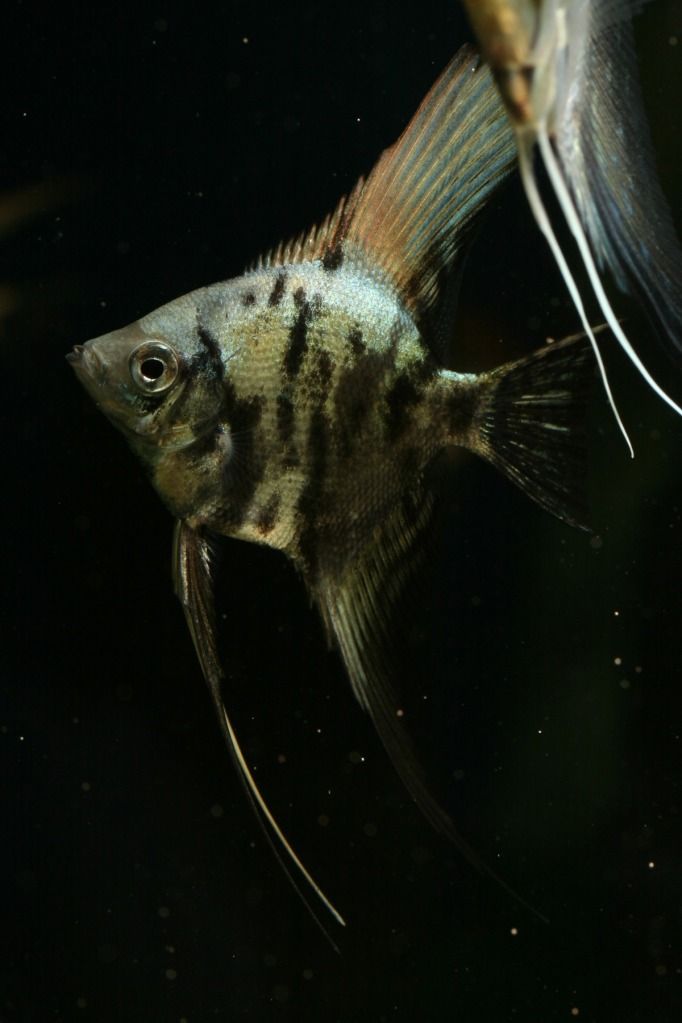 Father had quite a wide dorsal and a lot of his offspring seem to have inherited the trait, this is one of the blue smokeys.... 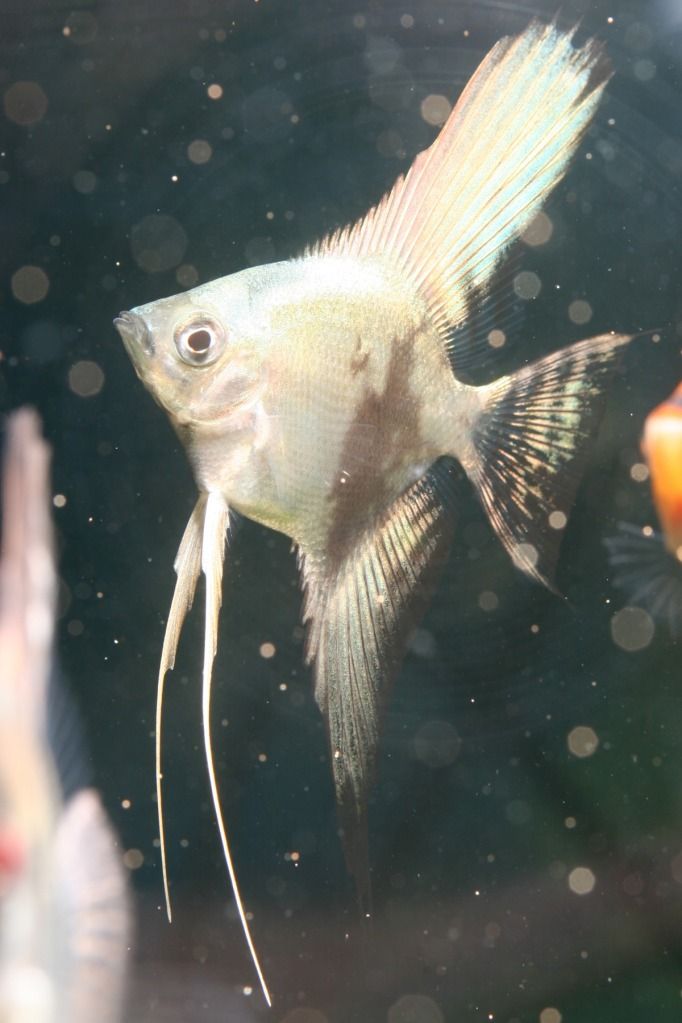 and finally a couple of shots of two of the non blue M/g - Sm/+ individuals. 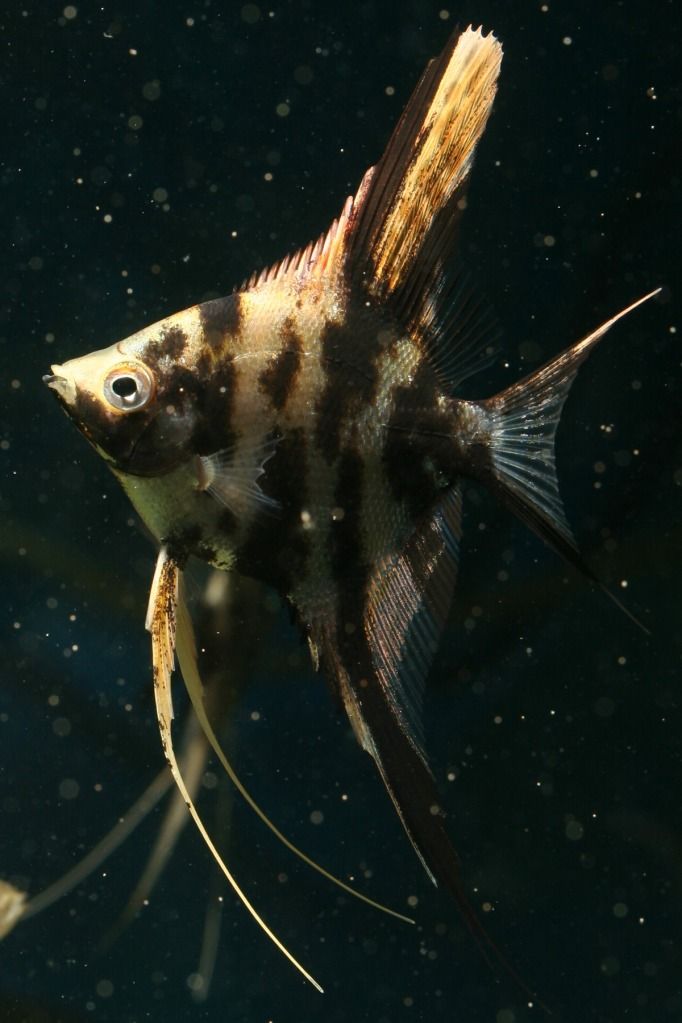 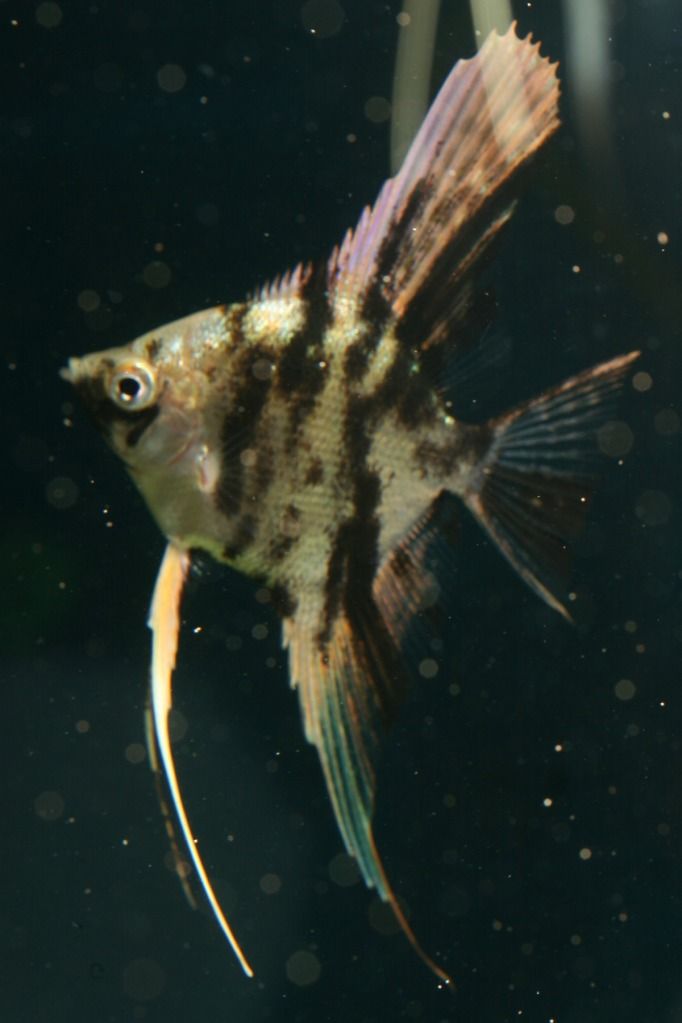 Hi Rob,Wet my appetite, i would say you are teaseing me as all of the fish you have posted pics of are very nice to say the least.The first two fish are stunning & what i would expect to see in a quality fish.Saying that the fish in pic N# 4 is a very nice colour no doubt inherited from dad & the fish in pic N# 5 is a real cracker & as you say the dorsal fin is very nice with good width
& shape.The possabilty of them carrieing the albino gene is also a bonus.

Hi Tony,
I was totally shocked with what i had seen & feel i only did what anybody with half a heart would have done.
It was the first & i hope the last time that i will see those conditions involveing fish,& from what the guy was telling me
he used to have a shop until a few years ago when i believe he said PetSmart or one of those type of large retailers opened up near him & put him out of buisness but that was no excuse to let things go the the extent he had.

Thanks to Rob (Pterophyllum) i am now the proud owner of 8 stunning Blue Marbles that have great body shape,markings,colour & finnage.They are currently in there new QT tank as of last night & appear to have settled nicely,i will try them on there first feed today & see how they go but from the look of them i dont think i am going to get any troubles with them eating.Once they have settled for a couple of days i hope to get some pics & post them for all to see.

Many thanks Rob they are stunners.

Glad you're pleased with them Paul, they've been fed on new hatched brineshrimp and tetramin flake, so you shouldn't find them difficult to feed!
_________________
Blessed are the cheesemakers!

Thanks Rob they have now eaten some tetramin as you said & they have also had some mini bloodworm which they seem to like ,so im happy if there happy.

Similar topics
» Blue Frog?
» WANTED - roof tent for my 110
» Everything you ever wanted to know about vermiculite
» Wanted - Personnel, a second expedition vehicle required, etc.
» Which Ball Blue Book