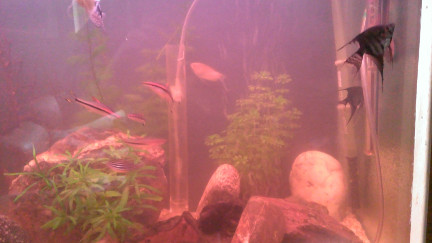 I have kept fish on a small scale for some time and had an Angel many years ago that survived a move from Cardiff to London but died on the journey to the north a year or so later.

Just installed a new 175 litre tank and added two Angels but one was killed so added five more but still lost one. Took the aggressor out and returned to store. Just lost another this week and a further one is being bullied. If anyone wants the bullied one they are welcome as I suspect he will be killed soon. I live in Southport, Lancashire/Merseyside.

I have given the angel away and replaced with two pearlescent gouramis. Hopefully it will calm down now.

Similar topics
» Outdoor Showers and other Gray Water issues
» Campfire Angel Food Yummies
» Tomato issues
» Is anyone else having issues with flies and gnats??
» Squash issues