I am new to angel fish and was just given a pair of breeding angel fish. I would like to know what you all think of them and if you can help me identify them that would be great! 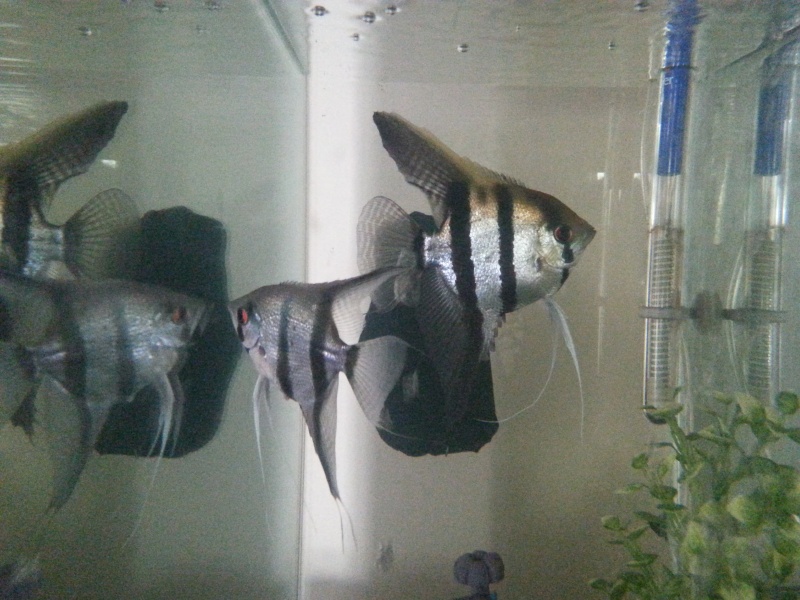 Hi, welcome to the forum.
they're silver angels, silver is the name applied to angels having the wild type pattern of 2 body bands an eye band and a tail band.
_________________
Blessed are the cheesemakers!

Thank you i know the pics are at an angle, but do you think that there body types and there condition would warrant me to try and raise fry that would do the species justice?

do you think that there body types and there condition would warrant me to try and raise fry that would do the species justice?

That's a very difficult one to answer, since beauty is in the eye of the beholder and what one person finds attractive another abhors.
The secret as a breeder is to decide what you like and don't like about your fish, and work over generations to produce fish which are closer to your ideal.

Personally, my greatest dislike when it comes to angels is a "lemon body", reasonably closely followed by an excessive nuchal hump, yet, on occasions I've bred from fish with these exact characteristics because they've had other characteristics that I've wanted. The key thing is to be ruthless in selecting which of their offspring to keep as future breeding stock.

So what do I personally look for?

Body shape.
I like a fish that is taller than it's long, or at the very least, as tall as it's long, I don't mind males with slight nuchal humps, but I'm not keen on pronounced ones.

Fins
Dorsal & Anal fins should be straight with no kinks. Some angels have thread like extensions to the dorsal and anal fin, and these can add to the look of the fish. Some fish have long pointed fins, others shorter broader fins, I like both types unless they're excessively short, in which case they can make the fish look rather squat. Ventral fins can sometimes be branched and split into multiple filaments, I used to like this look, but now feel that they make the fish look ragged, some are straight, others curve gracefully backwards, personally I like either, provided both are of similar length and mirror each other. Many angels have filament extensions to the top and bottom of the tail fin. I like these and try only to breed from fish that have this characteristic. Your smaller fish does, but the larger fish lacks them, unfortunately this might be because it never had them, in which case I personally would be rather reticent about breeding from it, but it could be that it's lost them through aggression or poor water quality at some point in it's life. In which case I would be happy to breed from it.

Colour
There are many unique colour varieties and for many people having the bluest blue or the reddest Koi is their primary focus. There are also some very distinct populations of wild angelfish.
Domestic silvers are almost certainly the result of the inadvertent mixing of fish from several different wild sources. Personally I'd either work with a specific colour variety, or with wild fish from a specific area, either to produce fish that are characteristic of that area, or to combine specific traits from several areas into a unique strain.

To Illustrate :-
This fish is a wild caught fish from the Rio Nanay in Peru. 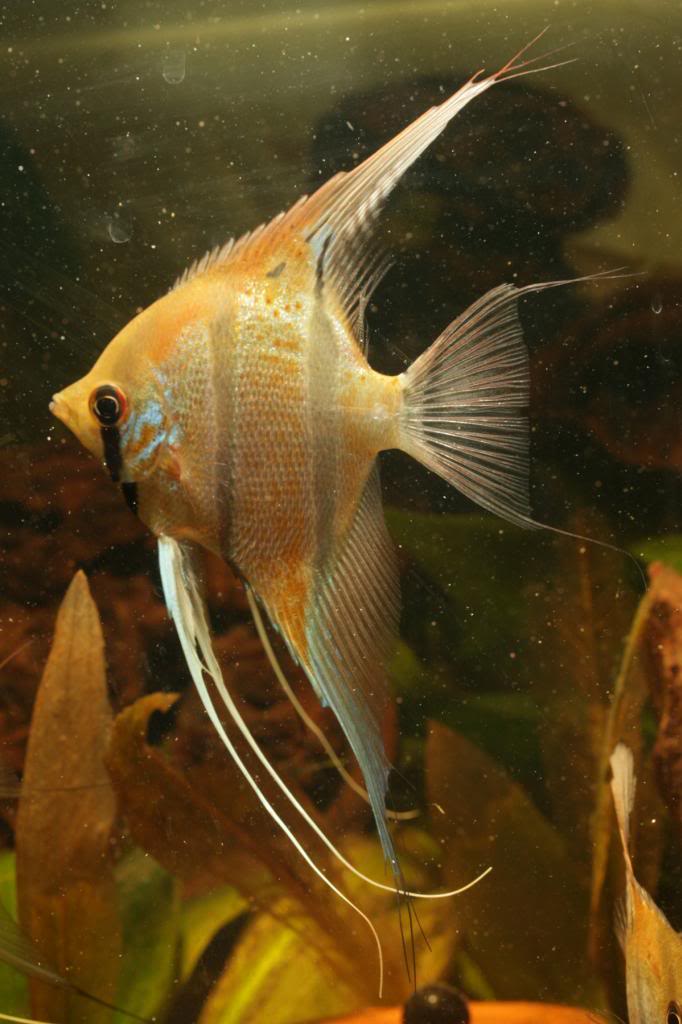 Rereading this, I realise that it may sound like I'm trying to put you off breeding your fish, I'm not, breeding any angels is a wonderful experience and silvers are often easier and faster growing than many of the more fancy varieties. So they're ideal subjects for someone just starting out in this hobby. I'm really just trying highlight for you some of the things that people look for. Ultimately what really maters, is breeding fish that you like. Enjoy.
_________________
Blessed are the cheesemakers!

Thank you for all your help! Everything you said made perfect sense. I am not looking to create a new type right now, as I have recently become disabled, at 25, im just looking for a hobby that I can enjoy. My dynamic duo breed all the time and I just felt that if they were having all these babies the least I could do was help them out and find out more about them. I have done lots of research and hope that one day when I have my own place ( I live in an apartment at the moment) to increase my interests and maybe breed to try and increase different geogrphic oriented population like you picture showed! But again, thank you for your information.