My female Blue Smokey Pearlscale has developed a couple of extra bulges, can anyone help with the diagnosis, she seems happy enough and is feeding OK, I have done my best to take a photo, but its not very obvious, so I have tried to indicate where the problem is, it is on both sides, I'm not too knowledgeable with Angels internal organs, but I know its not eggs up there. I did worm the tank last night incase it might be something on those lines. Any thoughts please? 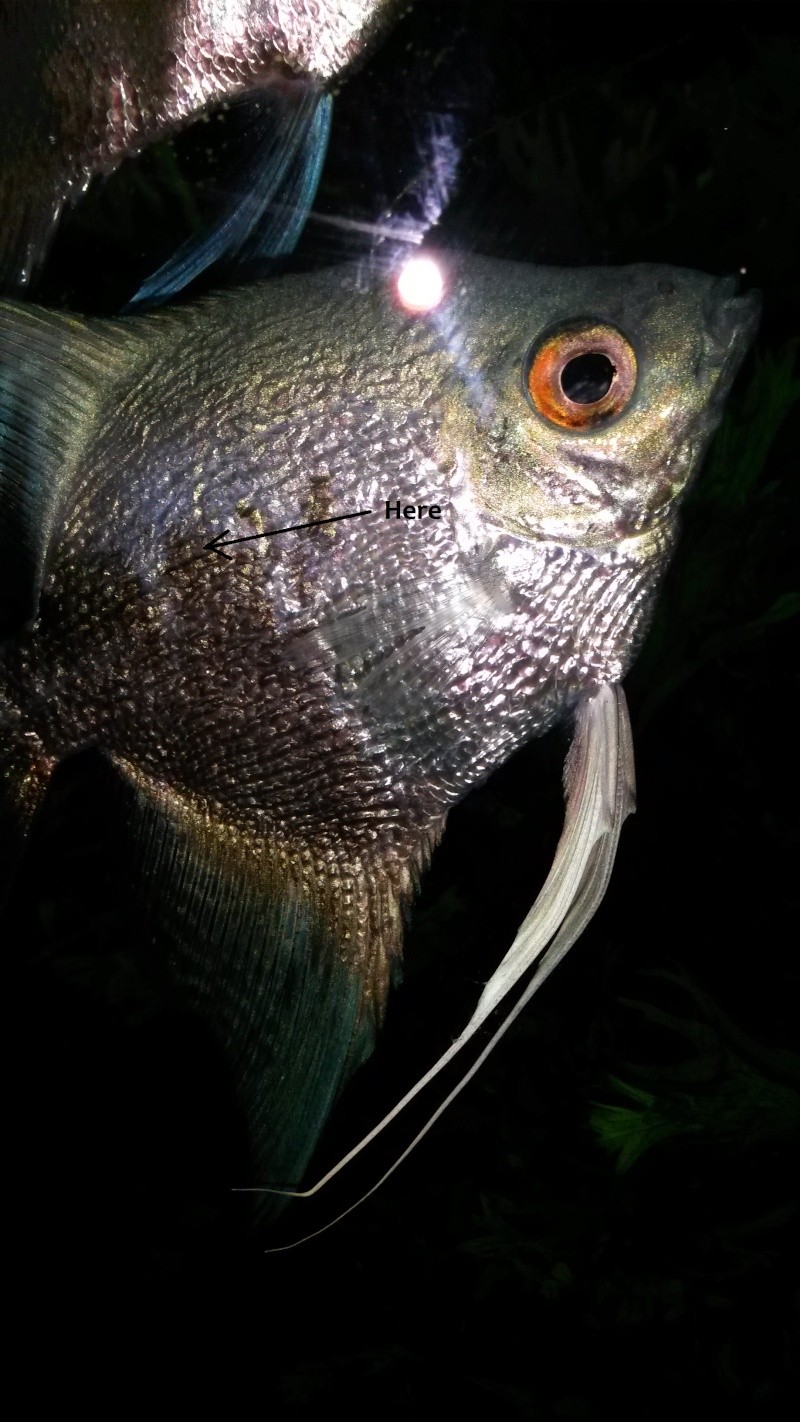 I'm not aware that there are any major internal organs in that area of the fish, as these are all concentrated in the front lower quarter of the fish, somewhere between the anus and the head. In the area marked, I'm fairly confident that it's just bone and muscle.

The bulges aren't apparent to me from the photo but I'm sure they will be more apparent when viewed at an angle, looking down the length of the fish.

I have seen bulges in that area before on non pearlscale angelfish (both sides), however, I suspect that they were underweight at the time.

I'd also be interested to hear about how you are worming tanks / fish, as I have some underweight fish. I've tried garlic with food, tremazol baths and fenbendazole soaked bloodworm (not all at the same time of course).

What is the consistency of its poo? or what lead up to you deciding to worm the tank?

I can't see anything wrong in the photo either but if you say they are then then I believe you. I know only too well how hard it is trying to photograph something you can see to show is others! Been there, done that!

Aside from what you've done already (which is what I probably would have done too - I'd have thought worms too) you could go to the pharmacy and buy some epsom salts (they're about £1.50 a tub) and add some tap water to a jug (about half a litre) and then add a tablespoon of the epsom salt. Mix it well as it takes some dissolving. Then add some of the fishes food to your net. You can then dunk the food into the salt water a few times and then feed the fish the soaked food. The epsom salt soaked food will help the fish to pass anything that shouldn't be there - build up of poo, any worms or excess bacteria

Just to be clear though as you'd be surprised - NEVER ADD EPSOM SALTS TO THE TANK. Soaking food in it is safe but adding it to the water column will cause your pH,kH and Gh to go haywire and will probably kill the fish rather than cure it!

Let us know how you get on

As the others have said, I can't see any bulge, but I believe you it's there, and I think I've seen what you're describing on other fish.
Unfortunately when you're dealing with something internal, unless you're prepared to take the fish to the vet for an x-ray, it's very hard to know what's going on, but that area of the body is essentially skin, bone & muscle, so there are 3 broad possible causes :-

1. Deformity of the spine or skeleton.
2. Wrinkling of the skin, given that the fish is a pearlscale which inherently has ridged scales (captured extremely clearly in your photo). I believe the deformation of the scales is something that increases as the fish ages, so it's possible that this deformation is setting up tensions in the skin which is producing localised bulges & wrinkles.
3. Growth in the muscle, two main possibilities here, some parasites, for example some worms, can form cysts in the muscle, even when dead, the immune system can continue to encapsulate the cyst (in a similar way to the formation of a pearl in a clam). The other possible explanation would be a cancerous growth.

To be frank, if the fish is feeding & behaving normally, I wouldn't worry too much, but would simply keep a close eye on it. If the area develops into an open sore, I would certainly isolate it from other fish & at that stage would consider putting the fish down, hopefully it won't come to that.

Thank you for your replies, I haven't noticed anything untoward with her until a few days ago, it looks like shes swallowed a small marble, so I was thinking a tumor? or worms if it was in the right place lol, I shall continue to monitor. Its funny when you want to see poo they never oblige!!!

I was told it was a good idea to worm Angels on a regular basis, I haven't done so for a good 6 months, so I thought it wouldn't hurt to treat the whole tank. I used Kusuri wormer plus, which had been recommended.

I have managed another angle of her, see if this helps? Its the same both sides. 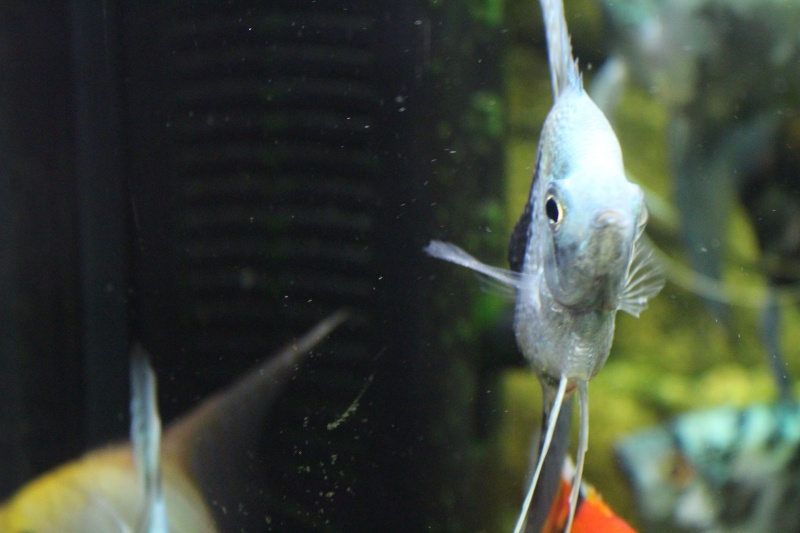 now I see it ... hmm. You mention 'she' ... do you have strong evidence she is definitely a she - ie - has she laid some eggs? I ask because she looks like my female when she's ready to spawn ... the swollen tummy just before she lays some eggs. I'm just wondering if she's holding a large amount of eggs and that's what the bulge is.

It's really difficult to tell when we're going from photo's. See what the other's think

I'd be inclined to suspect hexamita in this case.

Stop feeding, Treat with octozin ASAP, and carry our regular, daily, gravel cleans/water changes to reduce the risk of cross/re-infection.
_________________
Blessed are the cheesemakers!

Treat the whole tank or take her out would you suggest Rob??

hexamita is highly infectious ... treat the whole tank. I've had it in my tank, I lost two baby angels, a breeding pair of rams and some of my tetra's. As Rob says, I treated with Octozin and I used the epsom salt dipped food method I detailed in my previous post alongside it.

There is a medicated food available but when I had it in my tank the food wasn't available in the U.K. It might be worth checking to see if that is still the case or not - things may have changed in the last 12 months

Watch out for stringy white poo ... it's usually the first sign of Hexamita, followed by loss of appitite, sometimes they get pop eye with it (my rams did) and then death soon follows

OK thanks, first dose has gone in, fingers crossed

If you're able to treat her separately that's good as it reduces any risk of cross infection to her tank mates, but I would still treat the main tank, & do the water changes to minimise any risk.
_________________
Blessed are the cheesemakers!

Have to report poop normal lol

When can I start feeding again?

Good sign that it's pooping normally.
It won't do it any harm to go without food for a week, at the very least wait until the treatment has finished and the belly, hopefully looks less swollen.
As a matter of interest, have you looked at the fish carefully from above?
_________________
Blessed are the cheesemakers!

Just had a look, she thought food was on offer, the lump matches either side, she's symmetrical, her eyes aren't bulging, her scales are all flat, she's her usual gorgeous shiny colours, she's straight, she does look broad across the beam, as if she's full of eggs, she's not spawned to my knowledge for 8 months I guess, I gave up with her as she was a serial muncher, apart from the lump I can't spot anything she shouldn't have?

Well medication has been given, water changes done, have to confess I've left her in the tank so far, but perhaps now I should remove her?? Everyone looking as well as they did before............. am at a loss as to what to do next?

having treated for hex. The fish is pooing & feeding normally, I'd revert to my original suggestion :-

I wouldn't worry too much, but would simply keep a close eye on it. If the area develops into an open sore, I would certainly isolate it from other fish & at that stage would consider putting the fish down, hopefully it won't come to that.

I've done a huge water change tonight and double dosed with Prime, ammonia down to .25, Nitrite OK for the moment. It would have to be my show tank with all my favourite blues. I have 2 filters running on it, a large external and an internal, so hopefully they will recover quickly?

I have also removed 6 Angels to try and help the load.

I'm also going away on Monday for a few days, typical eh!! So instructions NOT to feed I think!

None of the fish seem to be showing any stress symptoms, I was looking closely at my female with the bulges, when I realised another Angel had lost its colour which I thought strange, which prompted the test.............

I've a bristlenose fanning eggs which seems OK, and some neons which also look OK, so fingers crossed.

I guess these things crop up from time to time to stop you being complaisant and missing a water change etc.

Certainly, in my experience, octozin has little or no affect on filter bacteria, and I certainly wouldn't expect it to be hitting water quality this long after treatment finished.
Strange??
_________________
Blessed are the cheesemakers!

I've also used octozin more than once and it never affected my filters either. Very strange that it has affected yours, I wonder if they have changed it's ingredients?. Hopefully it'll recover quickly though

OK an update, happily my main tank is back on track, no fish losses either

My female on the other hand is looking worse, she looks like she's going to burst any minute! 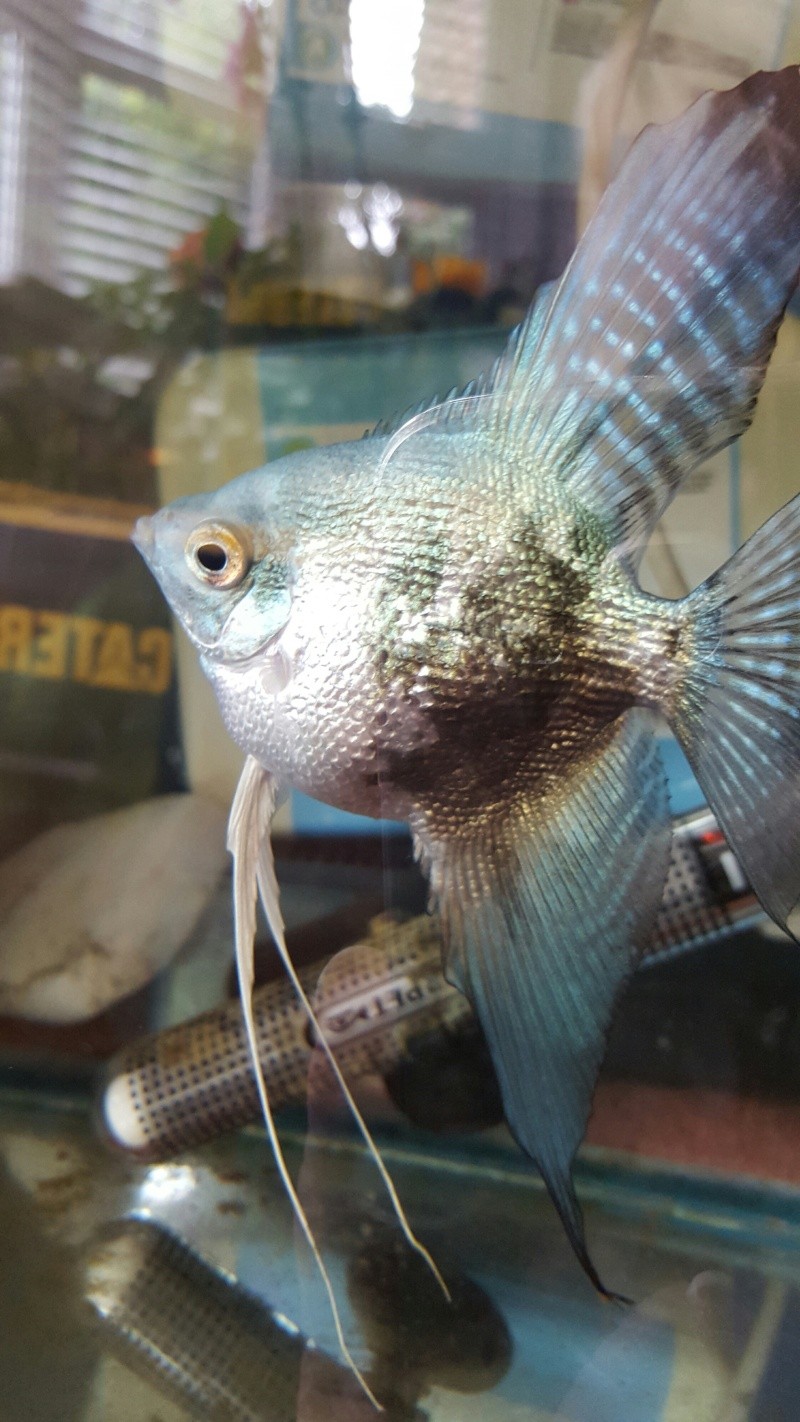 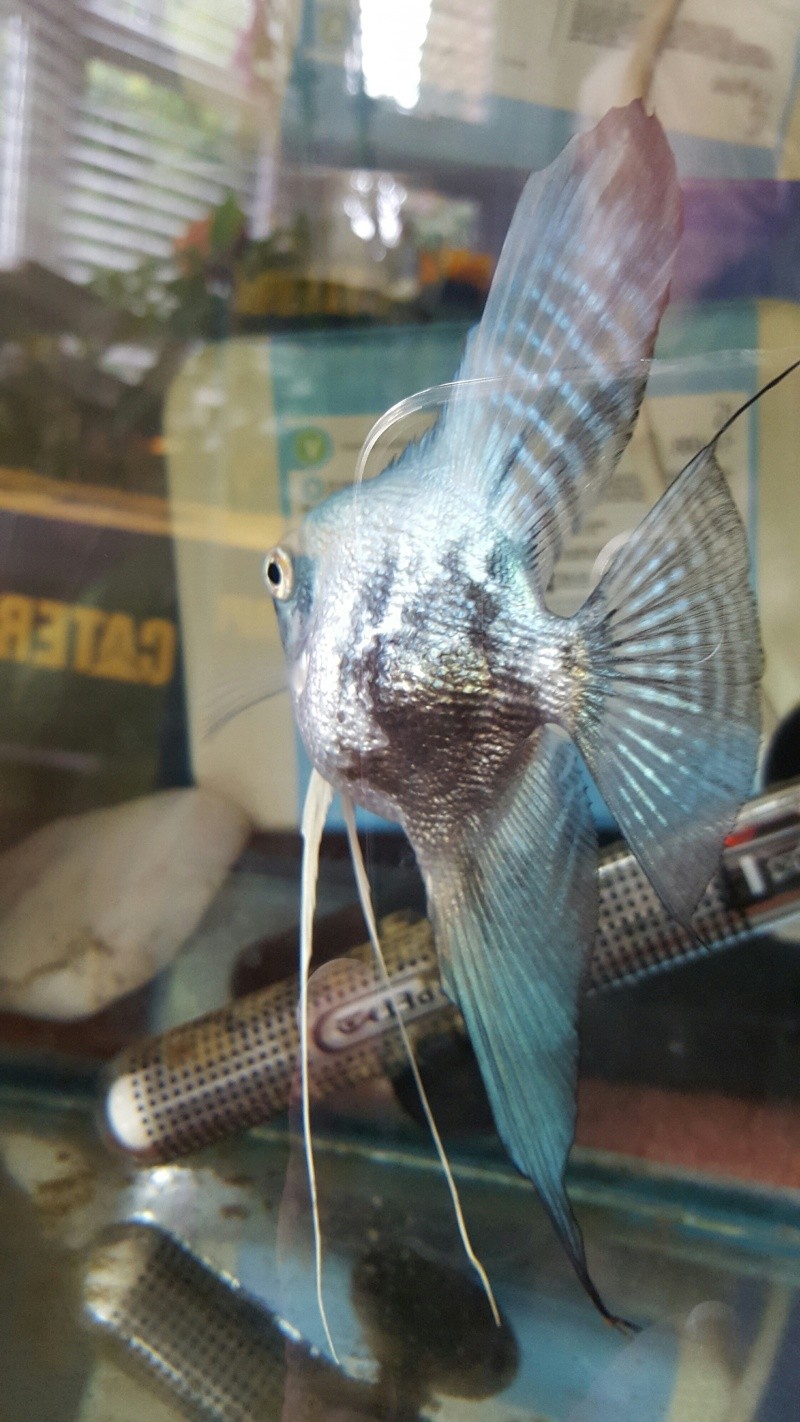 I treated her with Octozin in the main tank, I've now given her a couple of doses of Anti-Internal Bacteria which has Chloromine T, any suggestions what I should try next or just put her out of her misery?

The basic problem you have is that you have a fish with something going on internally, and no x-ray machine/MRI scanner etc. to tell you what's going on.

My best guess now is that it's probably some sort of cancerous growth/tumor. From the photo she doesn't look distressed so it's really down to you, put her down, or keep her in isolation in the hope that her immune system might kick in & deal with the cause of the problem. Only you can make that call.
_________________
Blessed are the cheesemakers!

Thanks Rob, I was hoping that as her fins were all up and proud that she wasn't suffering, for the moment then I'll just give her some tlc, if she starts to clamp her fins or try and hide, I'll think again.

On a happier note I've two platinums with their first brood, we're on day 2 of free swimming, fingers crossed they keep up with the good work.

Similar topics
» How do you store the extra compost?
» Extra deep boxes?
» Extra Dandy leg for stability
» ??what to do if a corn stock grow's an extra stock??
» Extra drawer space.