For a breeding project I'm after a Veil Pinoy angelfish het for albino. I'd love a Pinoy ghost but not really fussed. Must be young adult or juvenile, gender isn't important though female preferred... Looking around the west midland area but could possibly go further so get in contact.

I suppose if you don't ask, you don't get, but that's a pretty specific specification!

I have pinoys, I have a few pinoy veils (but none, that I'm ready to sell yet), one of the parents of the father of these fish was het. for albino, so there's a 50% chance that the father was too, If so, half of these will be het. albino too. The odds are improved slightly because there's also albino on the mothers side.
I've also got blue youngsters which I know are het. for albino, but none are veils and none are pinoys and at present none are for sale.

In short, I may have what you want in a year or two, but not at the moment.

Good luck in your quest, but I suspect you may find it easier to work towards your goal in stages, breeding in the albino, veil, Philippine blue and dark genes one or two at a time.

I have a philippene blue and it's just a good shortcut for me if they're out there but I'm not opposed to breeding it in though may need advice on best way to breed the genes in... Veil Pinoy of any kind would be good also as it's move the veil gene I'm after I just happen to be a huge fan of albinos but know breeding from them can be difficult which is why I'd prefer het albino... I guess dark gene veil could work too if all else fails but I will keep looking

OK, if you don't find exactly what you're looking for, I'll probably have a few of my pinoy veils available in a few months, and hopefully more blue veils of various varieties in the not too distant future.
_________________
Blessed are the cheesemakers!

can you let me know when they are ready? What kinds of Pinoy veil do you have?

What kinds of Pinoy veil do you have?

The male was a blushing smokey lace veil het. for pb, whilst the female was a streaked blue chocolate, so of the known genes the pairing was :-

all the pinoys will therefore be either pinoy smokey or pinoy chocolate, and some of these will be streaked.

Either parent potentially could carry the albino gene, but since there were no albino offspring, one at least didn't inherit it. If I've calculated the probabilities correctly, there's a slight better than evens chance that some of the offspring carry the gene.

I carried out this pairing to get myself some blue veils as potential breeding stock, at the moment these are about 4 months old, so although and I've already started selling some of the standard fin and non blue individuals, I'm keeping back all the blue veils until I've selected those I want to keep.

From a batch of about 200, only 25 are likely to be pinoy veils, and since veil, dark and the pb gene all tend to slow growth, I'm expecting a smaller percentage of decent quality fish. A further complication at this stage is that it's still quite difficult to distinguish between the pinoys and their black siblings.

I'll keep an eye out for that

I have some non-pb gene smokey and they're awesome. If all else fails I may cross a dark gene veil with my KK Zebra. I wish you luck with your fish either way

If all else fails I may cross a dark gene veil with my KK Zebra.

Hi,
Just to let you know that I've brought some of the pinoy veils into the shop for sale....

The parents were a blue chocolate and a blushing smokey black lace veil with one pb gene, so there were quite a mixture in the offspring....

The majority of the black lace and pinoy veils and all the Blue smokey and chocolate veils are £7.90 each.
I have 6 somewhat larger black veils, one or two of which are pinoys at £12.90.

as I mentioned in an earlier post, there's a reasonable likelihood that some of these will carry albino, but no guarantee.
The standard fin siblings to these fish are available at £5.90 each.
_________________
Blessed are the cheesemakers!

Thanks for the update - would most likely have got some but I came across some gems on my travels and they came out of QT not long ago. I got some good quality dark veils (which I need IDing actually when I get a decent pic) that will be absolutely perfect for my Pinoy breeding project. Don't know about albino gene but hopefully can breed some cracking fish from them with my PB zebra!

I posted them here

probably not as nice as yours but I think they're a good starting point. 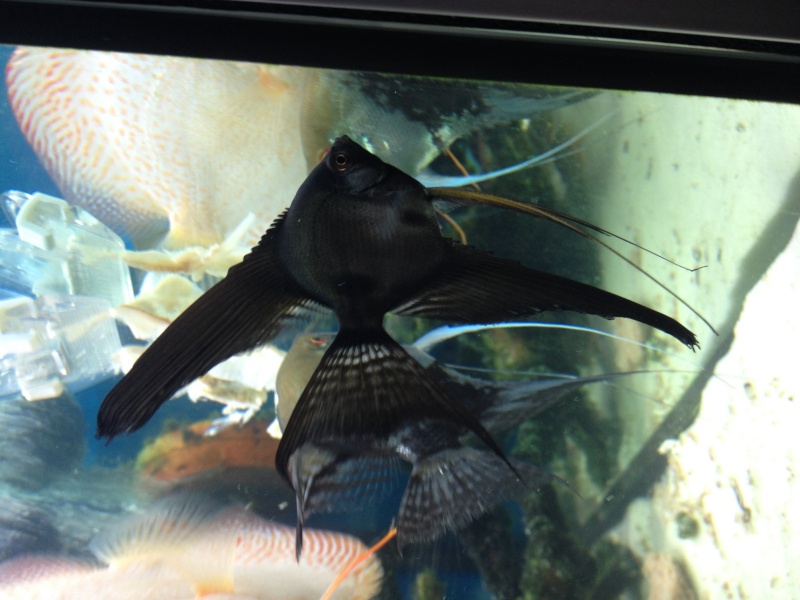 Obviously breeding them will be a long way off yet though. I would never breed a fish too young...

probably not as nice as yours but I think they're a good starting point.

I'd say that's an excellent fish, great body shape and well proportioned, nicely balanced fins, I'm sure you'll get some great babies from that one.
_________________
Blessed are the cheesemakers!

when I saw them I just had to get them but unfortunately the entire tank of angels had bacterial issues and I later found out they also had camallanus so their QT took more work than I was expecting lol! I was fine with "a bit of clean water will sort that..." Not so much finding out they had worms but I handled it and it's long gone. They were pea size too so at first I didn't think they would pull through but really glad I have them a chance...