WHAT DO YOU THINK OF THESE

WHAT DO YOU THINK OF THESE 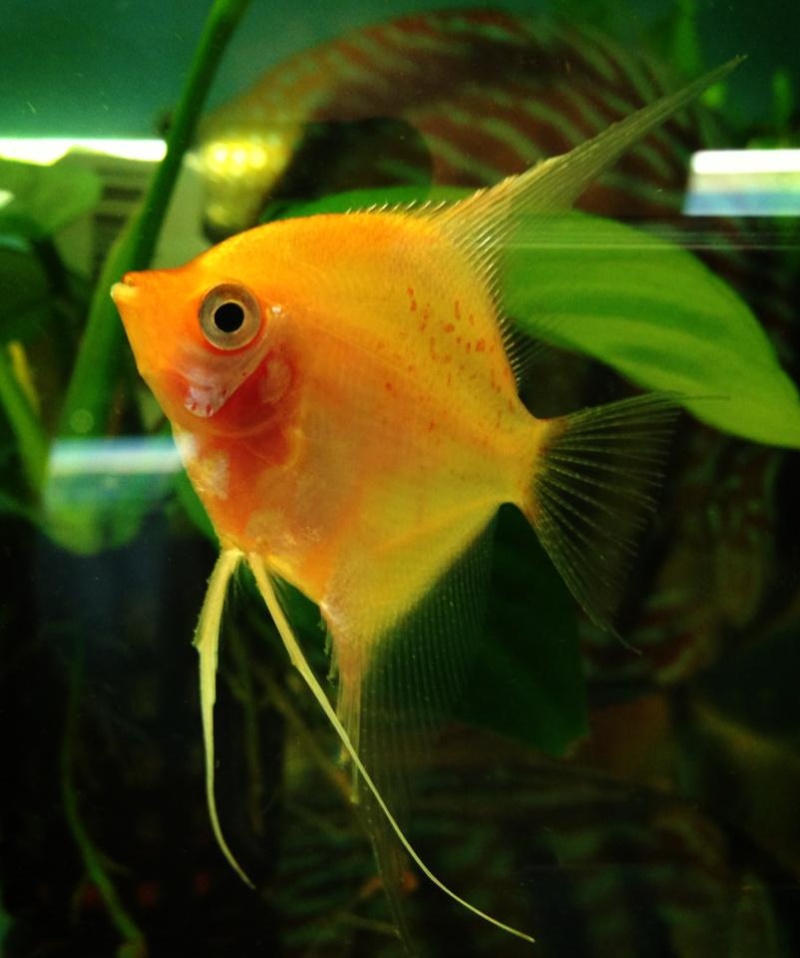 These are being sold as a new strain called Copper Moskito what are your thoughts as it is without doubt blushing & do you think the colour will fade.
These are german bred & apparently the parents are the same in colour.
Currently being sold at 50p body size £20 each.

Looks like a very nicely coloured gold blushing, the orange colouration in angelfish is down to the fish storing carotine from it's diet. Whilst the ability to store carotine is to some extent genetically determined; it also depends on it being present in the diet.
My guess is that there may well be a connection between these gold blushing angels and the so called "Red Devils" which seems to be a marketing name for some well coloured koi. The extent to which the colour is down to specific genetics rather than diet, is not something I can comment on, as I've not worked with either type.
_________________
Blessed are the cheesemakers!

Its funny you mentioning the Red Devils rob as when i had them they didnt realy produce any very strong coloured young when bred to each other & from what i can remember the german reds use to lose colour aswel over a period of time unless colour feed was offerd,so would you think these could be the same if they come from a similar gene pool.
I do like these but the price is off putting, the seller said they had 100 of these & have sold 60 over the weekend.If so then in around 4 or 5 months there should be a few being bred & hopefuly the price will be more appealing & that should also prove if they breed true with as good a colour as the one pictured.

It's a pretty fish but personally £20 a pop a little expensive for me and I think a bit too pricey for what it is.

Its funny you mentioning the Red Devils rob as when i had them they didnt realy produce any very strong coloured young when bred to each other & from what i can remember the german reds use to lose colour aswel over a period of time unless colour feed was offerd,so would you think these could be the same if they come from a similar gene pool.

I think there are several issues at play here...

First off most shops don't buy from breeders, most either buy from wholesalers in this country or from suppliers abroad, who might best be considered as agregators. In other words these foreign shippers don't breed the fish they sell, they simply get numerous small breeders to deliver fish to them and then send them out in bulk.
With the best will in the world a retailer can't keep abreast of all the developments in all the different areas, so unless he happens to be very clued up on, for example, angelfish, if his supplier invoices him for "Blushing Platinum Clown ghosts", he will assume that's what he received. The fact that blushing, clown and ghost are by definition mutually exclusive is one that he is probably unaware of.
The same applies to the wholesaler or trans-shipper, both rely on their suppliers, and ultimately on the breeder. To be frank many breeders don't have much clue about genetics and naming conventions, but what many breeders and trans-shippers and wholesalers know, is that a good name sells. Especially as often retailers are ordering blind from pricelists that give prices, names and little else. Descriptions are usually limited to "Nice", "Good Colour", "New", or similar blandishments. Photos are rare, and if they are used in most cases they're pinched from the internet and bear little resemblance to the fish supplied.
In short, despite having considerable interest in angelfish, I'm not sure what a true "red devil angelfish" is; I've seen the term applied to koi, to gold blushing, to fish that are obviously derived from Manacapurus and fish that look rather like what I think of as a Czech Red. If I don't know, I'm pretty sure most other wholesalers and retailers don't either.

In short, some of the koi I've seen photos of do seem to have exceptional red colour, the fish you've posted a photo of, does seem to have exceptionally good distribution of orange pigment and the Czech red fish that I had, whilst their colour faded as they matured, did seem to have atypical colouration. To what extent genetics, diet, artificial hormone use and food colouring added to the water is involved in the production of these different types I'm not in a position to say. But if that fish holds or develops it's colouration into adulthood, and the colouration were down to genetics rather than artificial manipulation, then frankly I'd consider it well worth £20, indeed I'd happily pay a lot more for it/them.

Sadly in the UK we miss out on a lot of the better quality fish, as hobbyists in Japan, Germany and many other countries are willing to pay much more than we will for quality. Try this one for example http://www.mellowaquatics.com/SAF-3371-Q-OrangeKoi_p_3614.html $69 for a beautiful koi, slightly smaller than the 50p size of these "Copper Moskito's".

I have to admit like yourself rob, if these fish proved to hold there colour as they mature & indeed pass it on to its offspring as do fish like the one you posted a link to from mellow i would also pay the price but i am very duebious of these as im sure ther would be more details of who has been able to breed such a fish in the way Raiko/Ken Kennedy documented there breedings the only details i was able to get was that they match the picture of the parents & they are from a german breeder.
I hope they do breed true for those that buy them as it would be nice to have some nice fish comeing through to us here in the Uk.

i am very duebious of these as im sure ther would be more details of who has been able to breed such a fish in the way Raiko/Ken Kennedy documented there breedings the only details i was able to get was that they match the picture of the parents & they are from a german breeder.

To be honest, I think Raiko & Ken are very much the exception, firstly because they are willing to be open about their discoveries, and secondly because they're prepared to go onto English language websites and write about their discoveries in English, rather than their native tongues.
There are a number of German language websites, and if you were prepared to trawl through them, I suspect you might unearth a little information.....
....But if you don't, then that's not too surprising. Suppose the boot was on the other other foot, and you'd managed to develop a new, unique variety of angelfish. Suppose you knew a wholesaler who was willing to take all you could produce, and pay you well over the normal going rate for angels.
Would you
i. Supply that wholesaler with as many as you could produce, and hope that no-one worked out how you were producing them?
or
ii. Broadcast all you've managed to work out about them, so that others can produce them too, effectively increasing supply, lowering demand, and undermining the price that your wholesaler is willing to pay?

As a hobbyist I would hope you took the latter route, as a businessman I'd have to advise the former!

I notice one of our German suppliers is listing them this week, if we were getting a shipment off them I might well be tempted!

I can see all the points your makeing,but i for one am not all about what i can make from a fish ie cash,& would be only to happy to let people know what i had managed to produce if it was something new & how i went about acheiveng the end product although if you are in the fish buisness to make a liveing then to keep it to yourself would be the way to go if you thought it was going to earn you a small wage for a small period of time as a small wage is better than no wage i guess but that wouldnt last for long unless it wa another fish like the parrot fish which is mainly sterile.

It would be good for you to get some from your supplier rob as im sure they would be a good seller & im sure you know the market in your area & wether or not people would be willing to pay the price.Plus it would be nice to see if all the stock being offerd is as good as what has already come in to the country.

HI ,
I have just purchased 4 of these "mosquito copper" angels from rare aquatics.  They arrived by delivery on tuesday.  I have to say that they are really beautiful and healthy looking fish.  They have settled in well with my platinum blues and silver veil tailed and are eating well and very lively.
The colour is better that I expected.  I have, I believe 2 males and 2 females (but time will tell). I have been told that they "breed true."
Does anyone know if there is a UK distributer of HC orange Koi?  I have seen an american distributer who is prepared to import to a LFS in the Uk but not to private individuals...
Regards
Justin 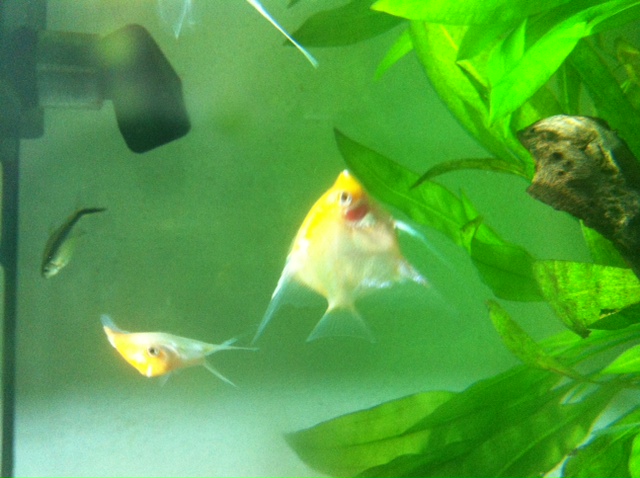