Could somebody tell me which type of angels i have as internet has different names? 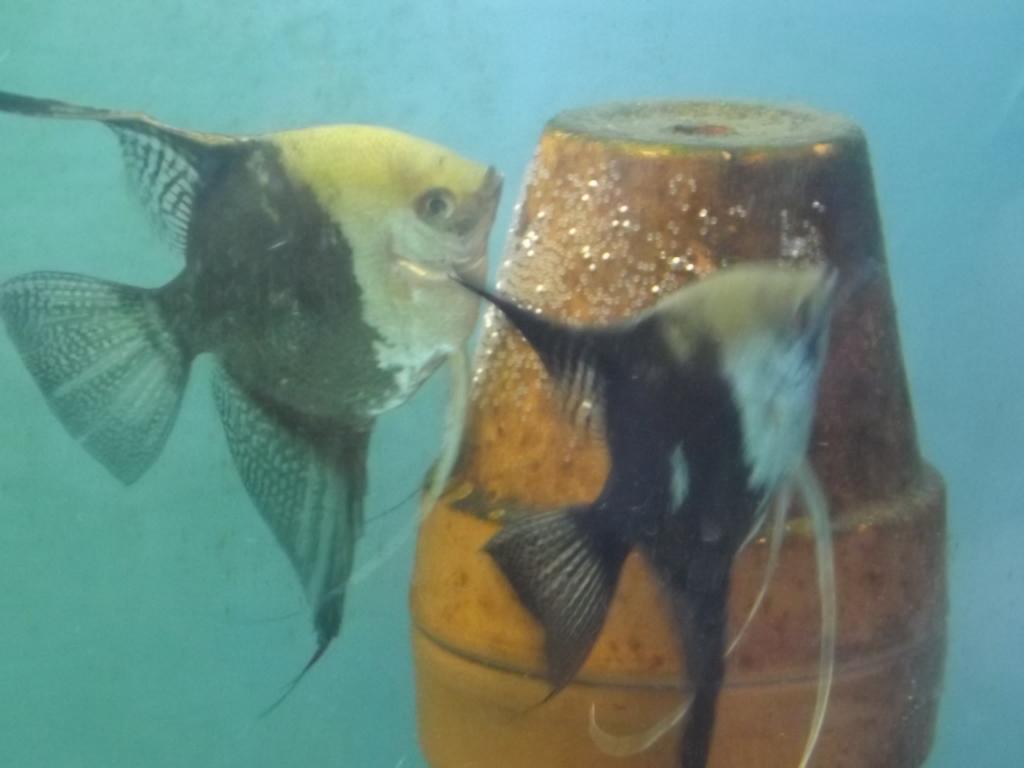 There are, almost certainly, at least, 3 different genes in play in the one on the left.
The most obvious is smokey, this causes the irregular black/brown patch at the rear. A fish with one copy of the gene is called a smokey, whilst a fish with 2 copies of the gene will have a much more extensive area of black/brown coverage, such fish are known as chocolates. The fish on the right has a fairly typical amount of coverage for a smokey, the one on the left, is more heavily marked, but not as extensively marked as I would expect a chocolate to be, in short, it's hard to be 100% certain, but forced to guess I'd say smokey rather than chocolate.

The next gene to mention is the zebra gene, on it's own the zebra gene produces a fish with more vertical bands than on a normal silver angel. Combined with smokey or chocolate it produces a fish called a leopard, also known as a smokey leopard. Raised under certain lighting conditions, the smokey pattern breaks up to produce a fish covered in small dots (hence the name); even when this doesn't happen, the zebra gene tends to cause the smokey/chocolate pattern to fragment, your fish is somewhat atypical in the solidity of it's pattern. The final effect of the zebra gene is in the pattern of striations (horizontal bands) in the dorsal and caudal (tail) fin and the pattern in the anal fin. The best way I can explain this is with photos of a blue smokey.... 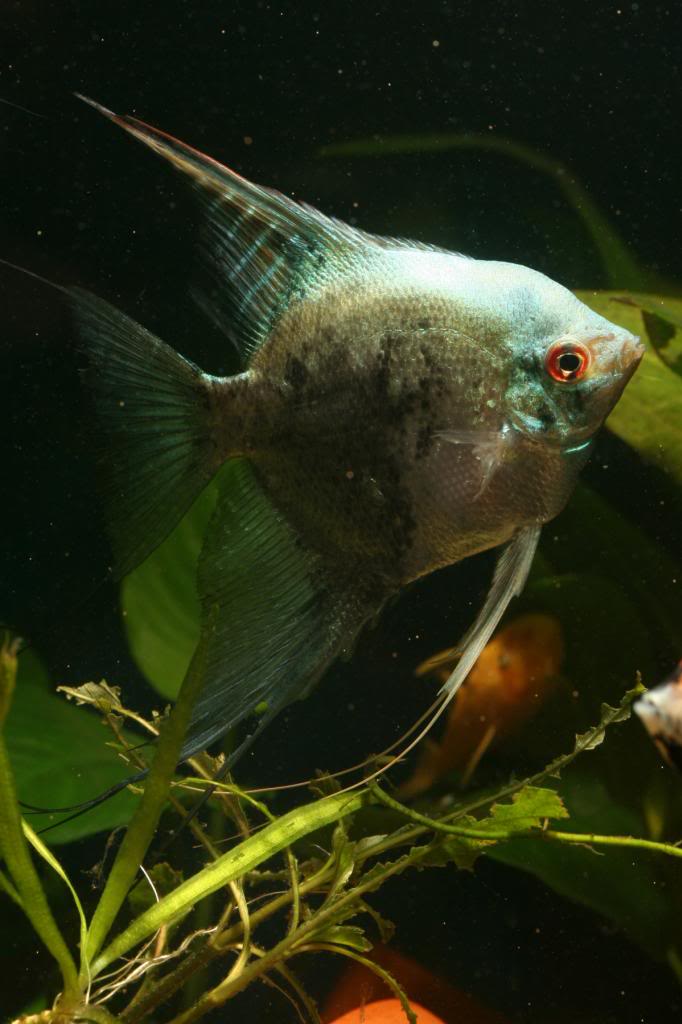 and a blue smokey leopard.... 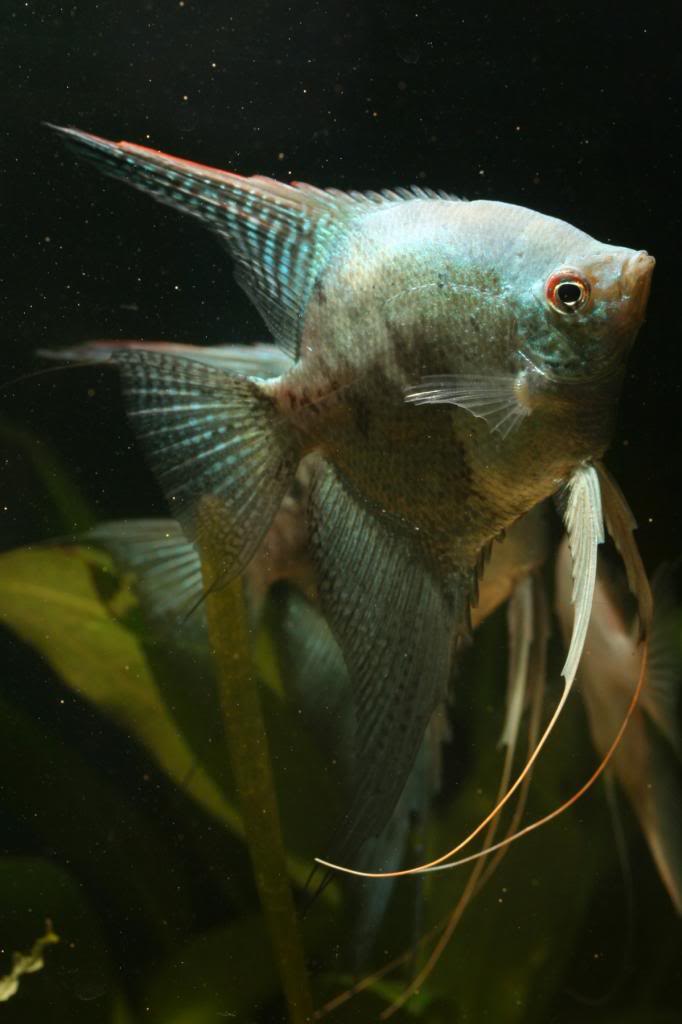 The Philippine blue gene also seems to reduce the smokey coverage, but you can see that both of my fish have far less extensive pattern than yours.
On the other hand, this blue chocolate has more extensive coverage... 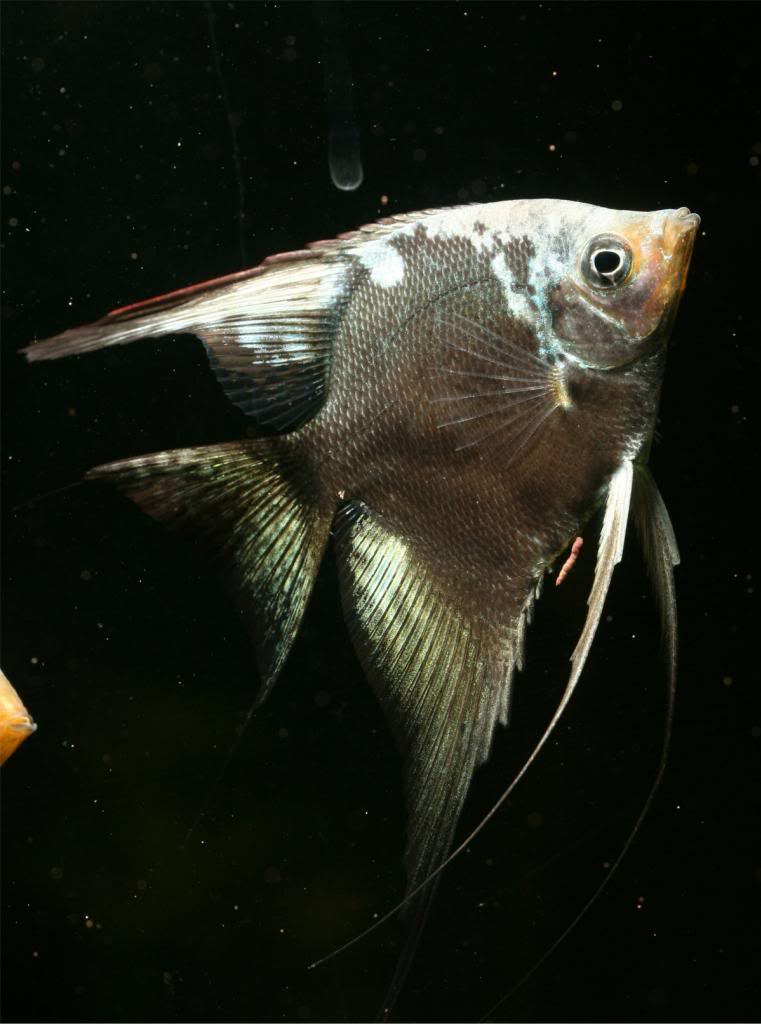 so you can see why yours is difficult to call.

It's hard to see the pattern in the fins of the fish on the right, but I suspect that too is leopard rather than a plain smokey.

The final gene at play, at least in the fish on the left, is streaked.

Streaked is a gene which is most obvious in black angels, and was generally considered undesirable. It's much harder to spot in other colour varieties. More recently it's subtle influence on the expression of blue fish has started to be appreciated.

Streaked is rather variable in it's expression, but typically it produces white streaks, or lines in the fins, and spreading onto the body, streaking tends to increase with age.

So technically, the fish on the left is a streaked leopard, but leopard or even smokey would be acceptable names.

Thank you for taking time to post such a great reply. I am trying to understand angelfish types and how they come about through their genetics. Can you point me in the direction of a good outline anywhere?

Dr Joanne Norton carried out extensive studies in the 1970's, '80's and early '90's, her work does not cover the albino or Philippine blue genes, and the usage of some of the names has changed slightly, but reading her articles is really good place to start.
Fortunately they are available here....