After several attempts at breeding angels i am eventually getting there.

Thanks to Bob for his excellent feeding advice ( see his post on here about hatching and feeding brine shrimp ) and thanks to Lisa for advising me to keep the lights on all of the time, this stopped the parents from eating eggs, wrigglers and fry.

The first batch they laid in the breeding tank mostly turned white in the first 24 hours but they did successfully get 26 to the free swimming stage. I took these from the parents at about 2 weeks old when the parents started spawning again. Unfortunately three of the fry died immediately after i moved them so i now only have 23. This has made me decide that, in future, i will take parents away from babies rather than the other way round.

All of them look to be g/+ with fairly even numbers of s/+, z/+ and v/+ , but they are very young yet and so they could look very different as they grow up. I think you can see the blue gene in the fins of the fry that look like they are going to be veil tailed. They have white ventrals and a blue / white edge to the dorsal fin. These fry were spawned on 7th September and were free swimming on 14th September, the pictures were taken this morning. 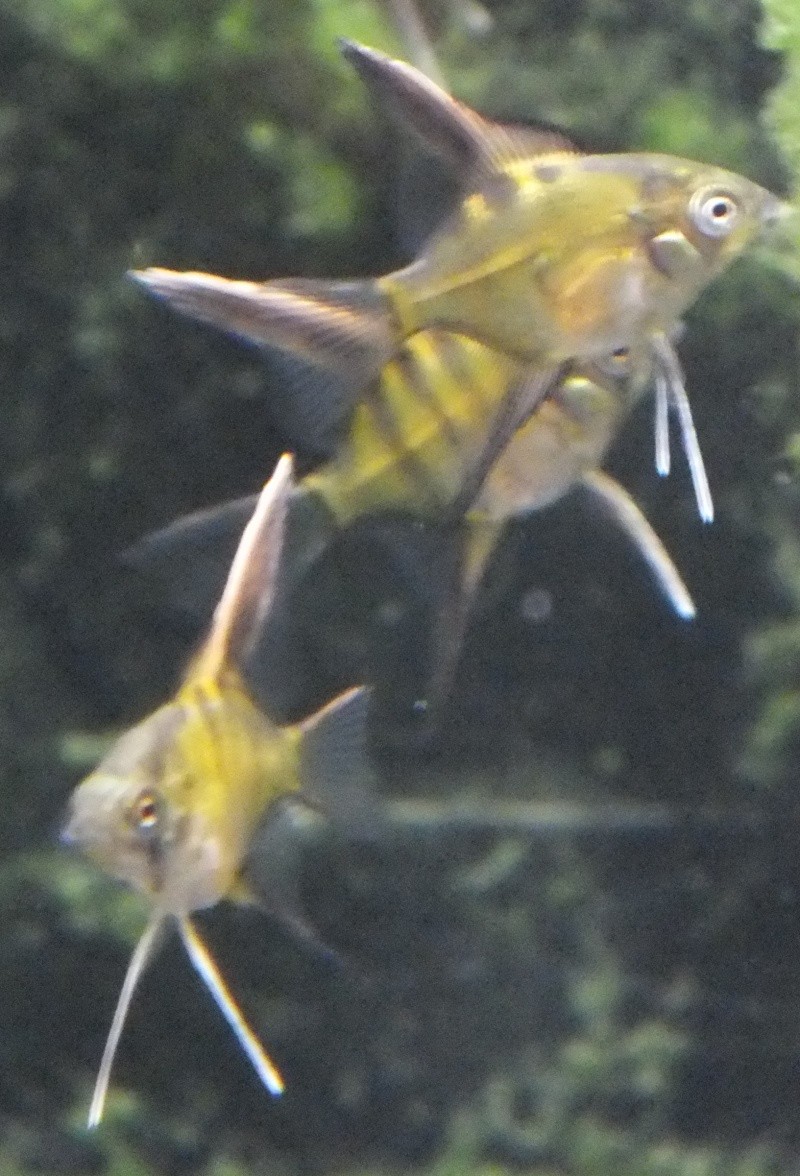 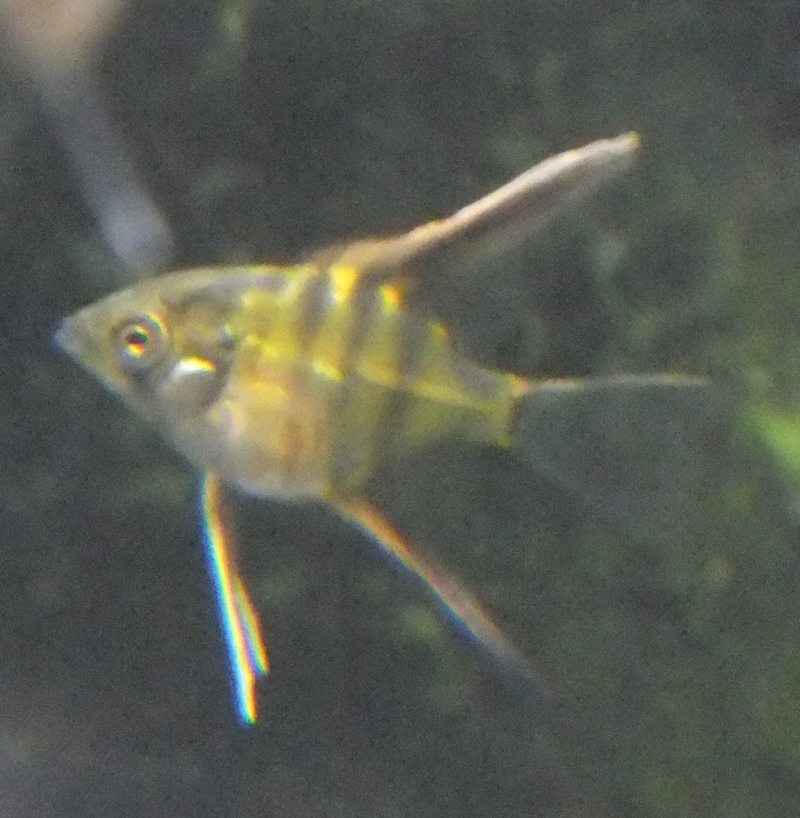 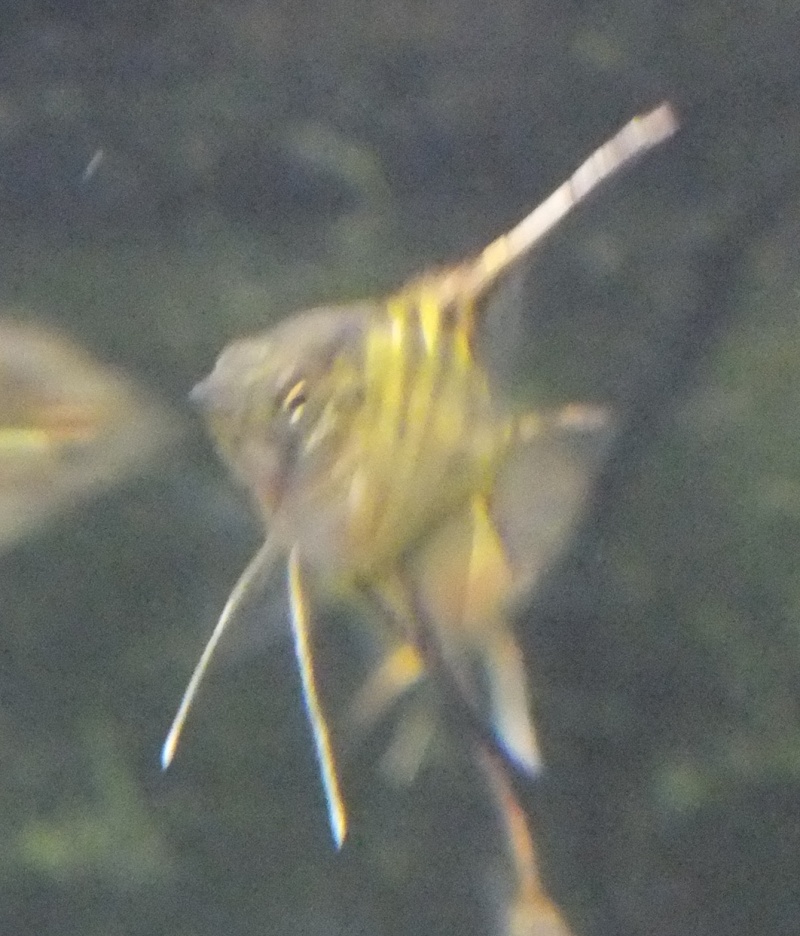 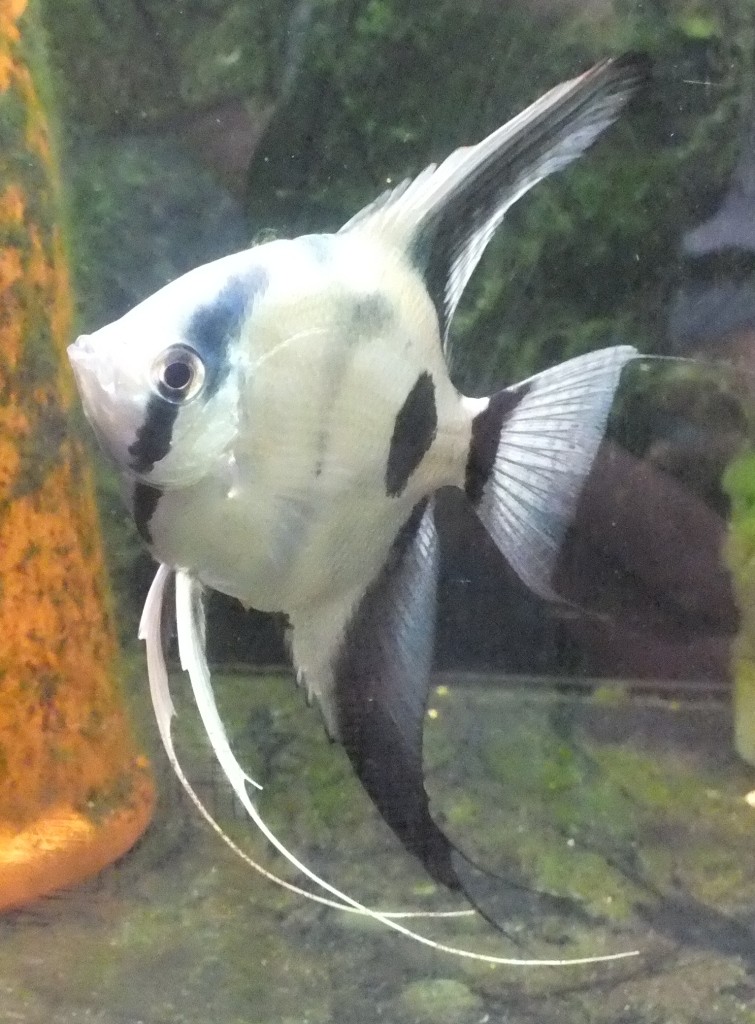 And this is both parents with their next batch of wrigglers. I expect these to be free swimming later today ( they spawned on 29th September ) 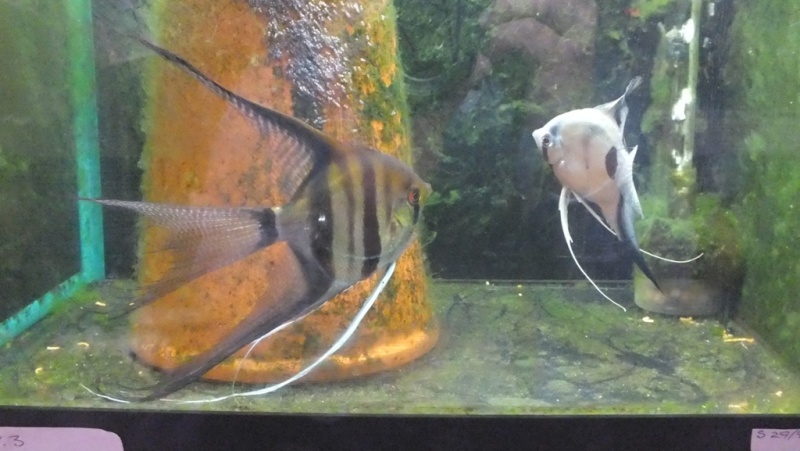 Their fry were free swimming on 20th September and they will probably be moved away from the fry in the next few days because some of the fry have started nibbling at their parents. They have tolerated this so far but i don't want to push my luck. There are several hundred fry in this batch so i should get some different genetics showing. The variation in size at birth and in the growth rate is amazing. Some are not much bigger than when they were first born but others are growing wings already. I cannot swear to it, but i am sure that i saw some of the bigger fry chasing and eating some of the smaller ones. I don't think there is much that i can do about that, other than try to make sure that the babies have the correct amount of food available.

At the moment i am concentrating on getting myself better practiced at raising the angels but i have given myself 3 years to get to a dark blue smokey veil tail. I have got all of the genetics i need in the adults i have got except for the dark factor, so far i have never even seen one in the flesh. I set myself this target just because i find it easier to work on this sort of project with a definite target in mind

After several attempts at breeding angels i am eventually getting there.

Thanks to Bob for his excellent feeding advice

In theory, you should only have 50% +/g and to be honest, there's not usually any discernible difference between a +/g and a +/+ youngster. the yellow colouration you can see on the youngsters is stunning, but I don't believe it's due to the gold gene, It is something you see with some Philippine blue varieties, it's a great shame that they don't carry it through into adulthood. Great photos by the way.

The variation in size at birth and in the growth rate is amazing. Some are not much bigger than when they were first born but others are growing wings already.

Some varieties do seem to be slower growing than others, but such variation can, in my experience, result from overcrowding - I've noticed that small batches seem to grow more quickly and at a more even rate, whilst large batches often seem to have a disproportionate number of slow growing and runty individuals. Splitting them up into 2 or 3 tanks can help.

I've also noticed that when my youngsters are fed exclusively on brine shrimp, growth tends to be fairly consistent, but at the point I start offering dried foods (flake) along with brine shrimp, some start to grow much faster than others. A while back I had a batch of about 100 where the growth rate was markedly different, so I split them into two tanks, the next day when I fed them I noticed that the larger ones all devoured their flake, but the smaller ones seemed to ignore it. After about a week or two, most of the small ones were eating flake just as avidly as their larger siblings, and their growth took off again.
I think part of the issue may be that larger fry can intimidate their smaller siblings from feeding on dried food, but because it's so small and constantly swimming, they can't stop them from feeding on the live brine shrimp.

i have given myself 3 years to get to a dark blue smokey veil tail.

I agree having a clear target in mind really helps move a breeding project along, it also helps in selecting which youngsters to keep, I find it much easier to part with a fish if I can fix on some negative attribute, even if it's only the presence or absence of a particular gene. Faced with three near identical siblings, and I really struggle to choose one to keep! But the biggest challenge is staying focused on your goal and not allowing yourself to get sidetracked by all the variety in every spawn.

except for the dark factor, so far i have never even seen one in the flesh.

At present I also have a few young adults available, these are smokey black lace and blushing smokey black lace all are heterozygous for pb, oh yes, and some of them are veils (guess who's heading in a similar direction to you!).

By the way, that female Lisa sold you is stunning!

The male that i got from Lisa at the same time is even better
(gm/x, s/x, pb/pb ) 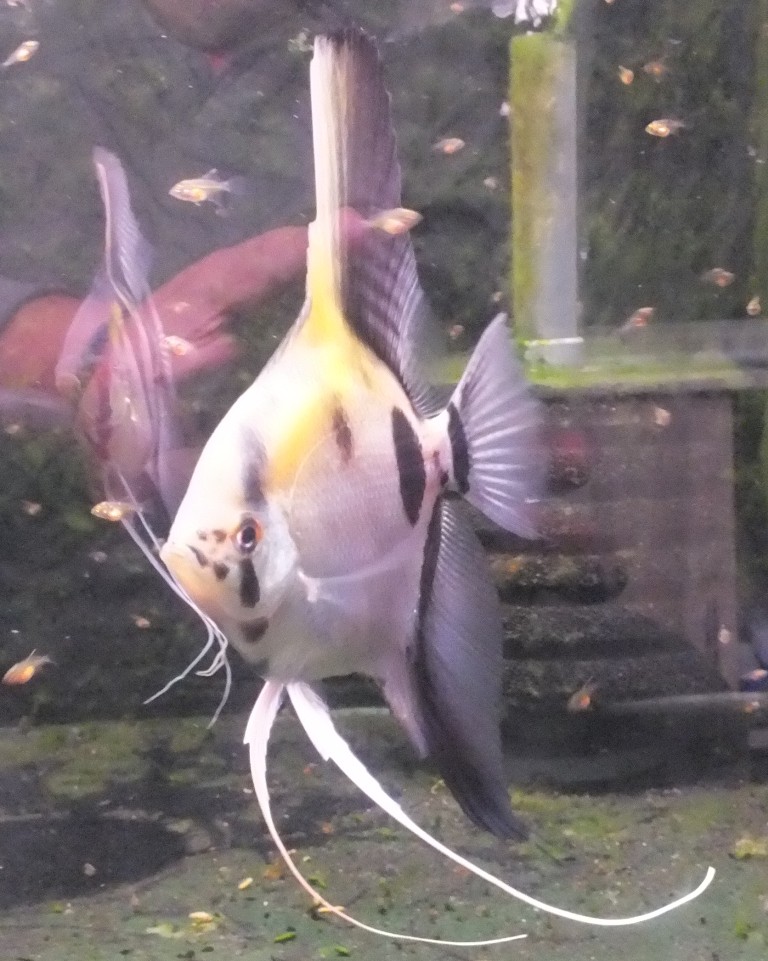 Here are the first pair with the next batch of fry, free swimming on Sunday 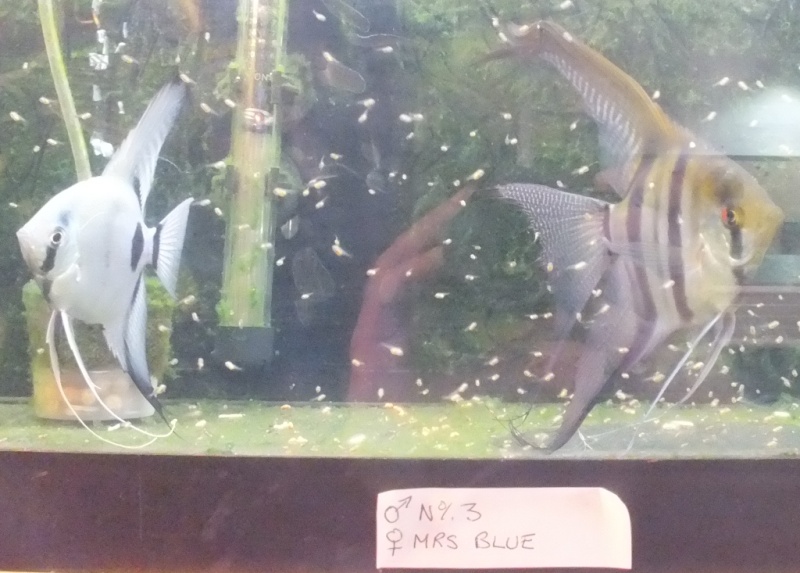 Their previous batch are now in the grow out tank along with some peppered corys and two L128. The long finned ones are looking really good 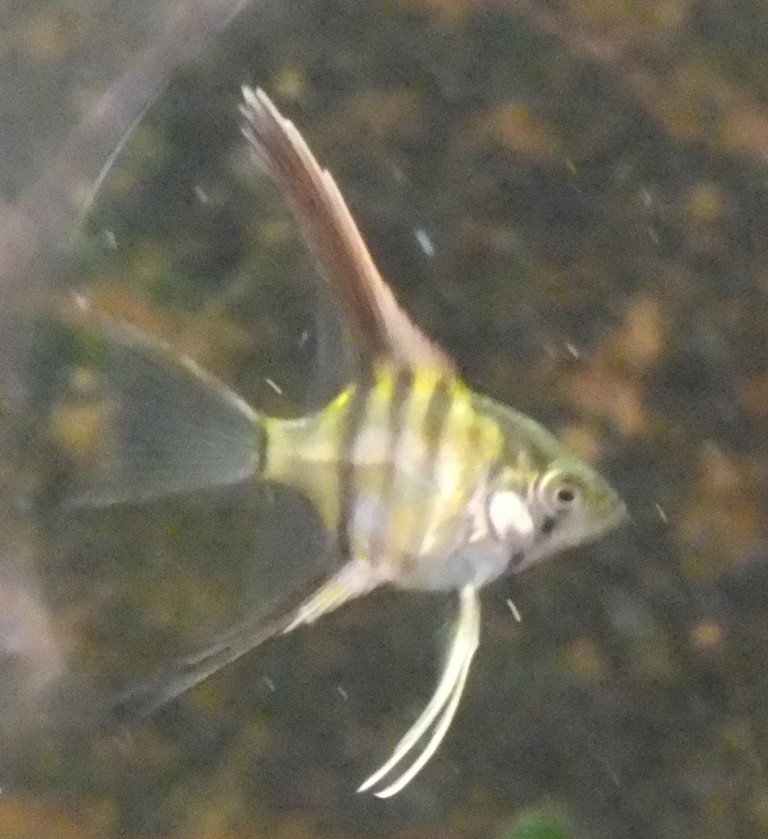 I think i can see evidence of the yellow colour beginning to fade, as you predicted.

cracking young you have there, nice and yellowy gold at a yooung age, will be interesting to see them age!