Hi All
I am interested in buying some wild Angels I have been offered the following fish for sale
http://www.uk-angelfishforum.org.uk/gallery/Angelfish-Images/p8210028-pic_39.htm

Some at least are showing good red colouration, but body shape doesn't look quite right to me. Is the seller claiming these are actually wild caught fish? How big are they?

I did question this and he has stated that they are F1 fish, they have a body size of 3". They are 12 months old which seems a little small.

Are these fish the seller bred himself? or are they fish that the seller imported from Czech republic?
3" doesn't seem too bad for a fish of that age.
I can't claim to be an expert in this field, although I have owned a few fish that were described as Manacapuru, none was claimed to be a wild fish.

I was inspired to seek them out by a photo in a book called My Angelfish by Frank Schafer published by Barrons. The photo in question shows a fish with a very white body, red back, red eye, and four very strong black bands, It has long tail streamers and a high body.

So inspired I obtained a number from a Aquarium Glaizer in Germany, Here's a photo of one of the fish I aquired :- 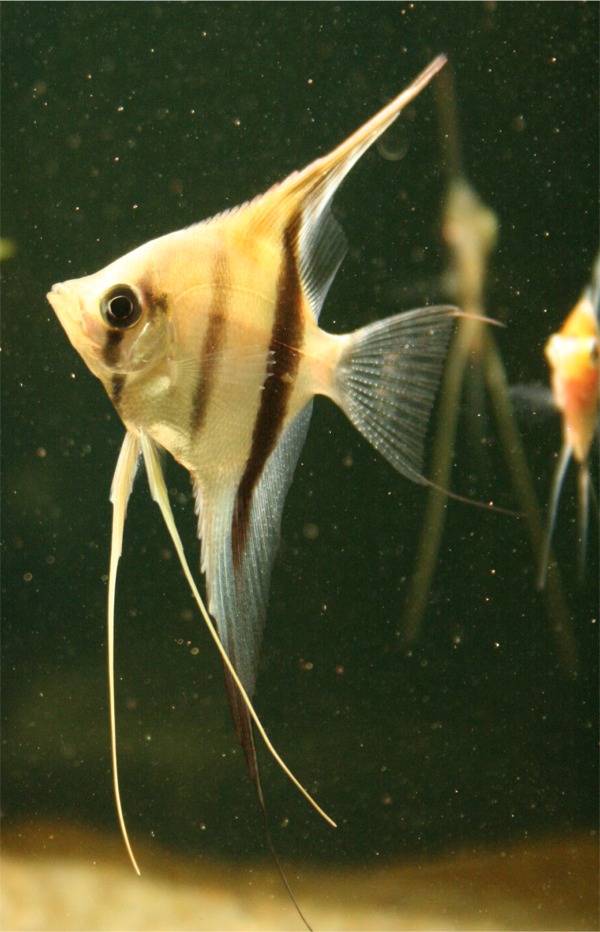 I'd guess this fish was about 6 months old when I got it, notice the absence of any red colouration at this stage, also notice the lack of red eyes, and the lack of a black tail band. Also notice the shape of the nose the comparitively deep body and the long fins compared to the body.

Over time these fish grew and one eventually came to look like this :- 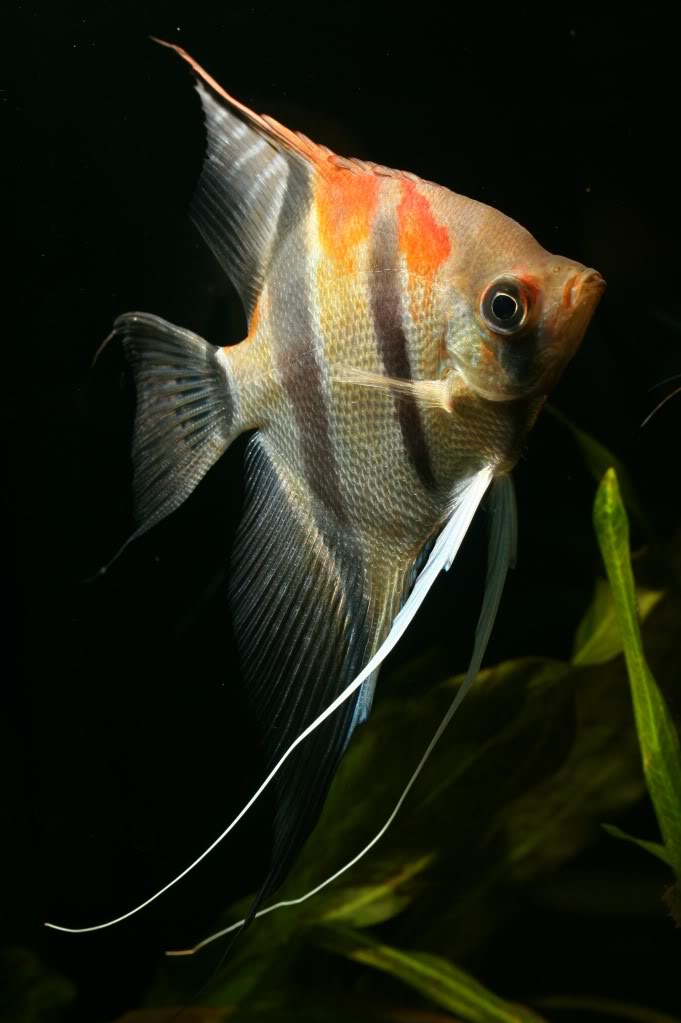 notice the black eyes, the shape of the nose, that on this occation it is displaying a fairly faint tail stripe, also notice the shape and distribution on the red colouration.

Sadly, over time I've lost most of my original fish, seemingly to intestinal parasites, although I do have 2 remaining. So About 10 months ago I ordered some more, this time from a Czech supplier; these were described as f1 on the list. These seem to be very similar my first fish and seem to be developing on similar lines, this is one of them :- 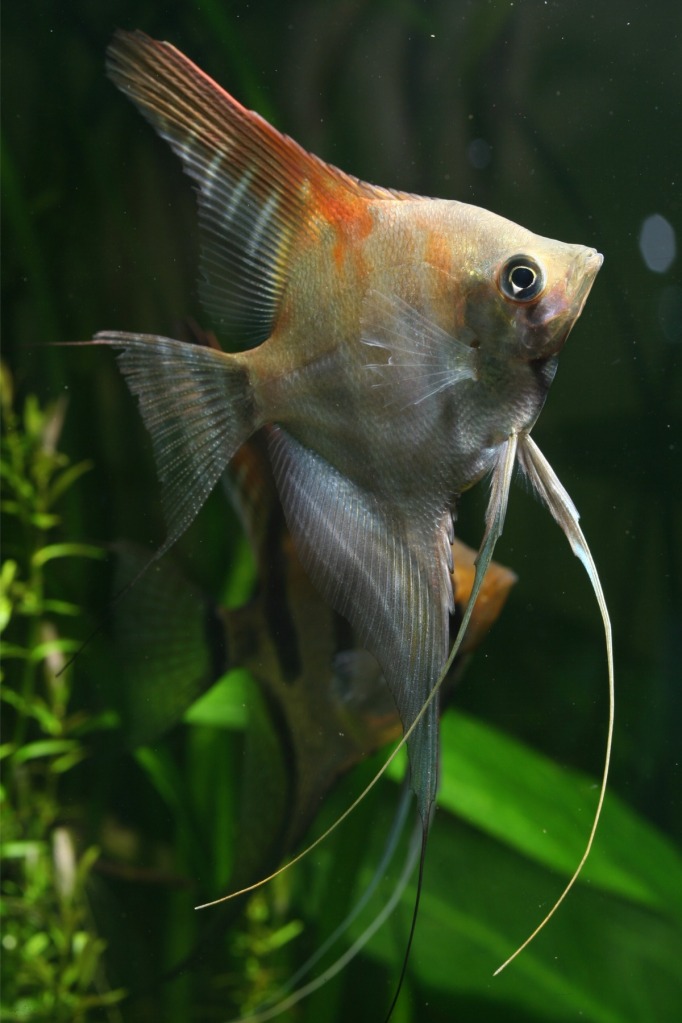 Initially these seemed thin & very slow growing, but after treatment for worms they have taken off apace. Some are showing hints of red eyes.

Recently, as several people had been asking about red backs I thought I'd try some more, these too were ordered through a Czech supplier, but not the same Czech supplier, these too were described as F1's. Frankly I was very disappointed when they arrived as body shape seems more like a typical domestic fish. I've brought them home to see how they develop - no photos at present, but just for comparison, this isn't a manacapuru, it's a domestic silver that I bred, but it's about the same size as the fish in the previous photo :- 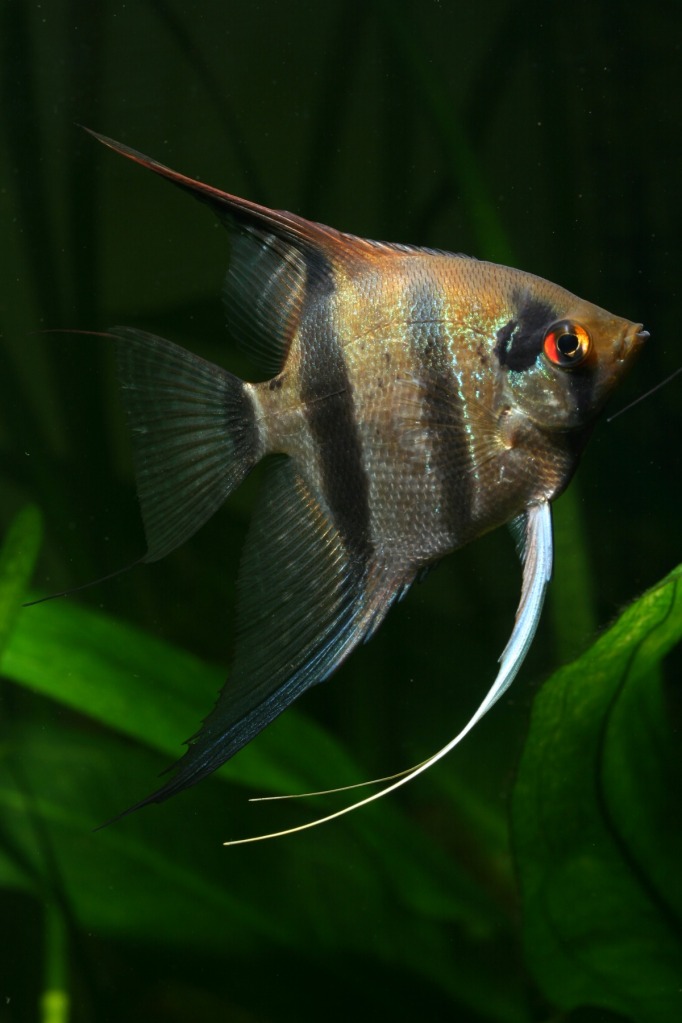 notice the body and nose shape, and although it does have red brown colouration on it's back, notice how it's distributed.

In your photo there are 4 fish shown fully, numbering anti-clockwise from top left (No. 1)
All seem to have long ventrals (a good sign)
No 1 has a red eye, but not much sign of a red back.
No. 2 has some signs of a red back, but a disproportionately large red eye (a sign of stunting in discus)
No. 3 & 4 show good red colouration and more proportional red eyes.

How much is he asking for them?

I breed Discus and the eye size was the main concern due to a sure sign of stunting, however the aim is to breed off these and grow on the fry to see what I can get from them. these are a very good price. I visited a shop today that had some Red backs in stock and they were looking for £39 each for juvinile fish.
I have always had a pssion for Angels but gopt bit by the Discus bug bit am strting to thin my Discus stocks out and looking to breed more traditional/wild types of Angels

If the price is right, and you're not too concerned about being 100% confident on provinence, then you can't go too far wrong.
If they're not true manacapuru's, they're probably manacapuru x domestic silver, or derived from some such cross; and since persuading the real thing to breed seems a lot harder than is the case for a typical domestic angel, that's probably an advantage in a breeding program!
_________________
Blessed are the cheesemakers!

So is 7 for £100 a fair price ?? I personally think that is a good deal so i have reserved them for now and will update when I collect and settle them in

Recently, as several people had been asking about red backs I thought I'd try some more, these too were ordered through a Czech supplier, but not the same Czech supplier, these too were described as F1's. Frankly I was very disappointed when they arrived as body shape seems more like a typical domestic fish. I've brought them home to see how they develop - no photos at present, 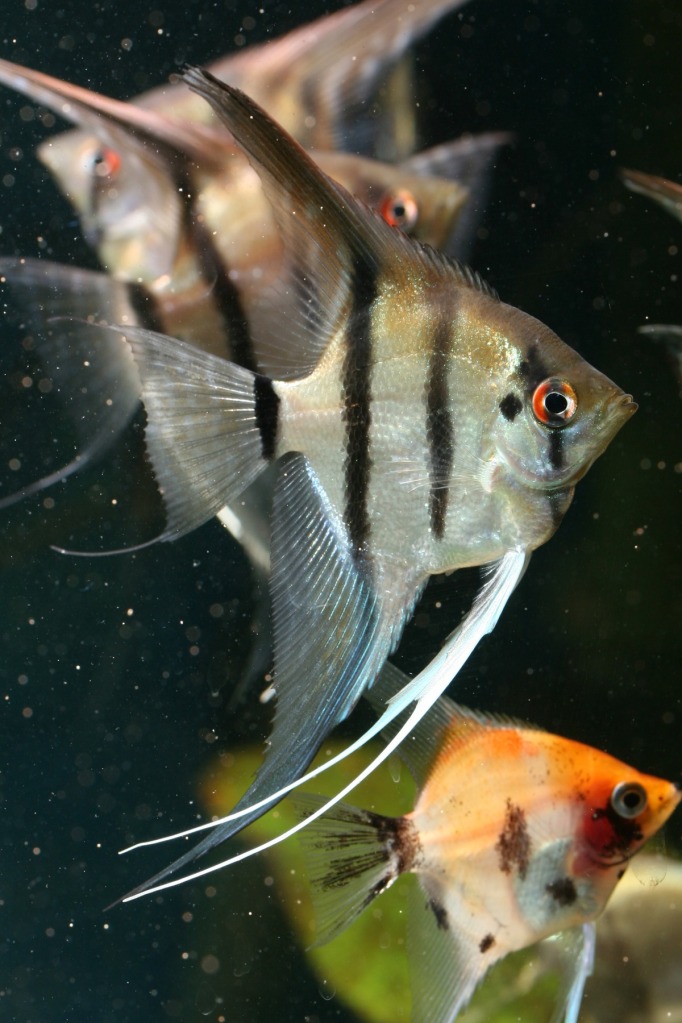 I have already contacted him and will be picking up soon:)

I have to say the first batch you imported were the better looking fish however it will take time for the Red colouration to come through but the second batch do have a more domestic look about them. Still nice fish dont get me wrong and would fit into any breeding project.

I have 6 Leopoldi and will have the 7 Redbacks soon so will be feeding them up and droppping the PH to see if I can get them spawning and hopefully get some young to grow out. I have a pair of Black Veils that I fell in love with, however they fight like cat and dog over the spawn so will be remoiving the spawn from them next time to raise away from the parents.
Thanks So much for your input and I will keep you updated on the progress.

On occation I've removed one or other parent and left the other to parent raise with success.
_________________
Blessed are the cheesemakers!

Well I collected them last night and the pictures dont do them justice, they are a little on the small side but they are stunning fishAll sat in their new set up eating already so now to feed em up and see what transpires.

Well they have settled in well and are now wvery well fed and have lovely soft water, there seems to be two pairs out of the severn and I think there may also be another when I remove some of them, to breeding tanks.

cant seeem to embedd them in the thread ???

To insert a picture that's on your computer, is a bit complex, but here goes....

Above the white box in which you type your text are a number of icons, one shows a picture with a file in the bottom right corner. Click on this and a dialog box should pop up, titled upload your image
Click on "choose file" and another window pops up, navigate to where the photo is stored on your computer, and either double click on the desired file, or select it and click "open". The window closes and in the original dialog box it should now have the name of the desired file to the right of the "choose file" button.
Click "host it"
You're now presented with "Thumb nail", "image", and "image url" with a line of code underneath each and a copy button to the right of each.
This is the bit which threw me at first, click one of the copy buttons and it will highlight the code, BUT IT DOESN'T COPY IT!
Instead you now have to point your cursor at the text, right click, and then left click on "copy". Finally you close the window by clicking on the "picture with a file" icon again, and finally left click and paste the code into your post....

This is an Image 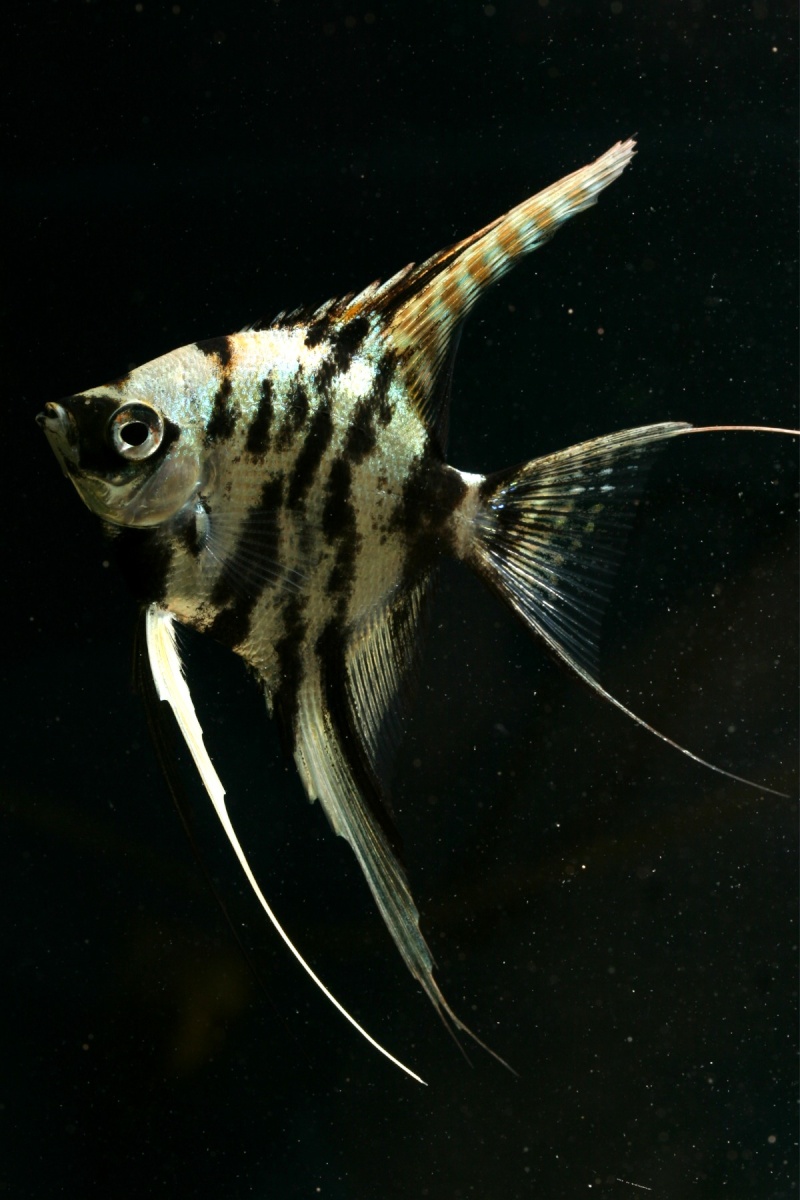 As you see image url doesn't produce an image, but if you click on the icon showing a picture without a file to the right of the one with a file and paste the url into the dialog box which pops up, you get an image as before....

The other way is to open an account with one of the photo hosting sites, such as photo bucket, upload your photo to that site, you can then copy the image url from that site and paste it as described above.

I know this all sounds horribly complex, but it's worth the effort!

okay so pics if this works !!! 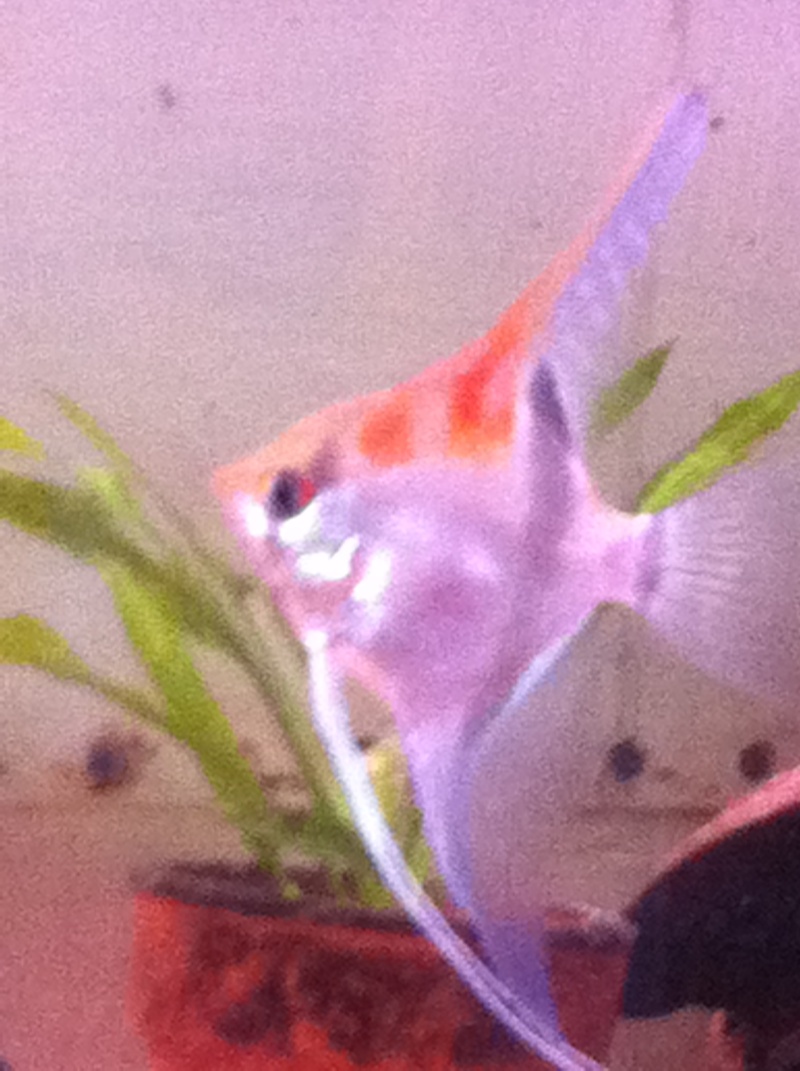 It's not the best shot, but the colour is very clear, and the distribution of the red is just what I'd expect, looks like you got yourself a bargain with those!
_________________
Blessed are the cheesemakers!

I will try and get some better shots tonight but I have to say I did well witrh these and they are now very fat and fighting like cat and dog at ench end of the tank with three stuck in the middle.

The colour is stunning, can't wait to see more piccys 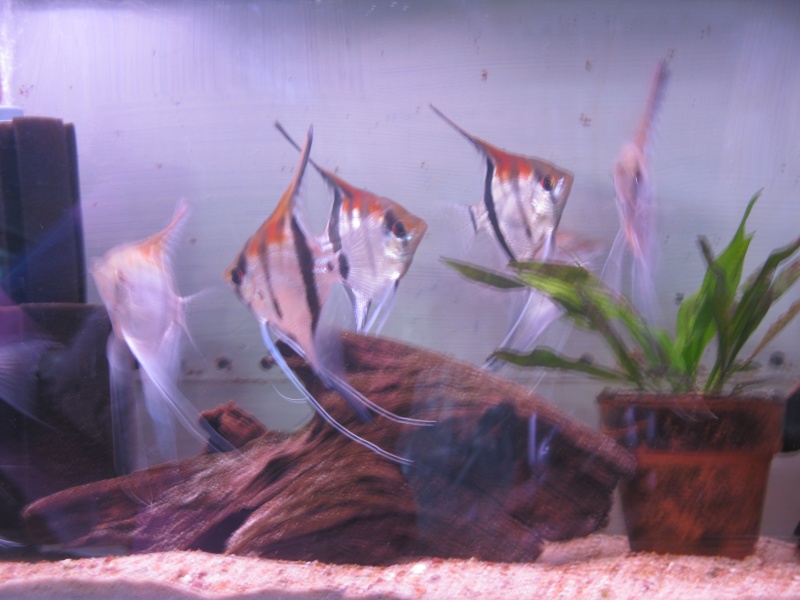 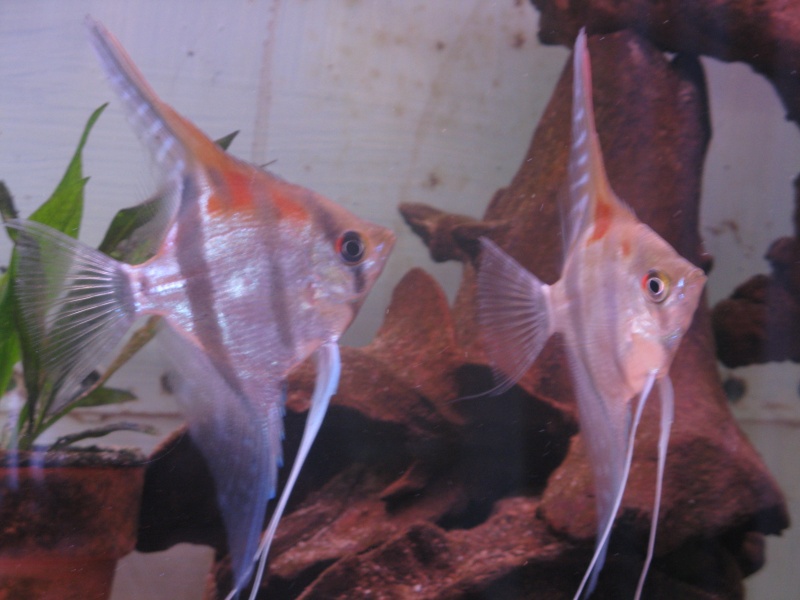 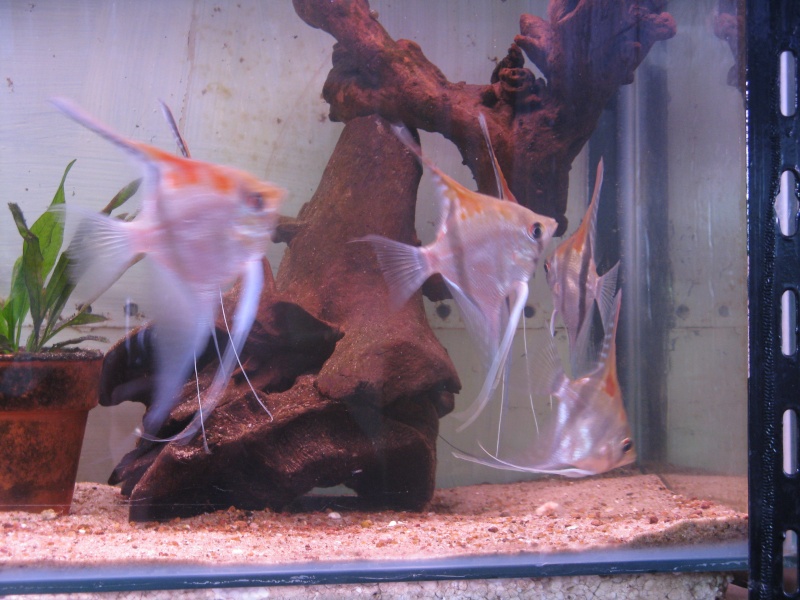 Well despite my reservations earlier in the thread, those certainly look to be the "real deal" - beautiful
_________________
Blessed are the cheesemakers!

in fairness I also had those reservations amd the pictures did not help. The Orange moves to a deep Red when they are sparing and they are stunning with full bars out with the deep red.