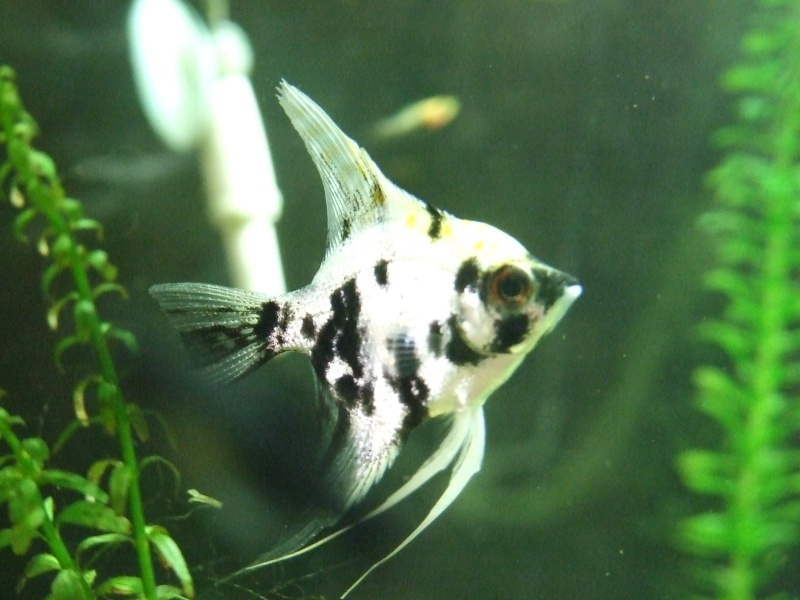 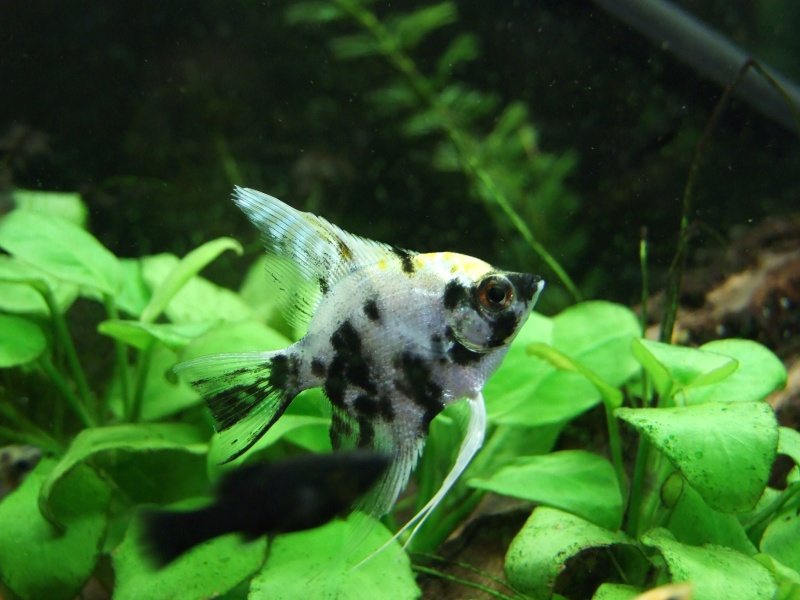 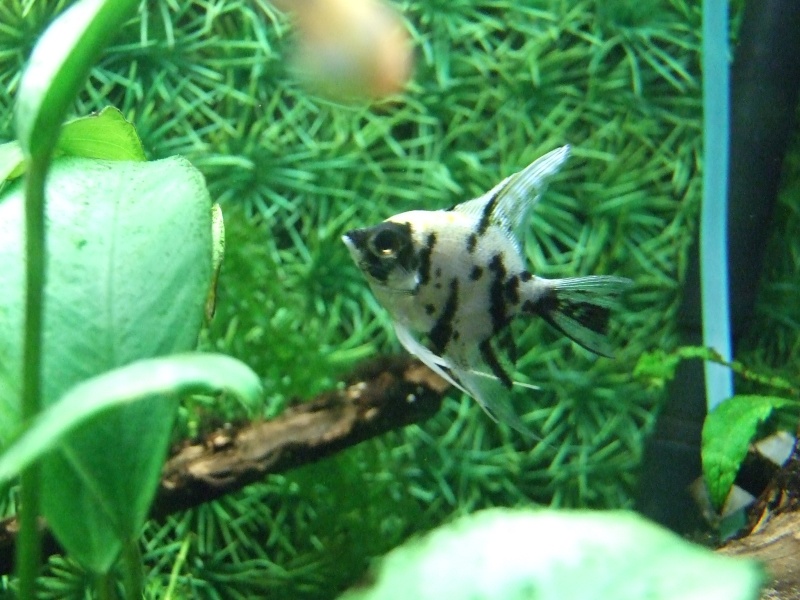 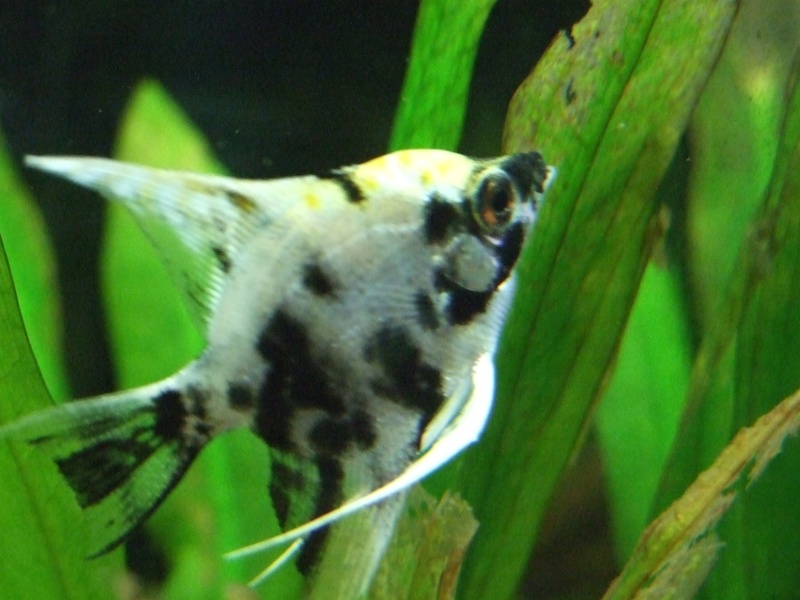 umm, ok.
Don't bank on this one but I would say it is more of a male than a female.

Give it a week or so and ask again.

Thank you both I'll update again in a weeks time, oh and what's the difference between a koi and a gold marble?

This is a typical gold marble :- 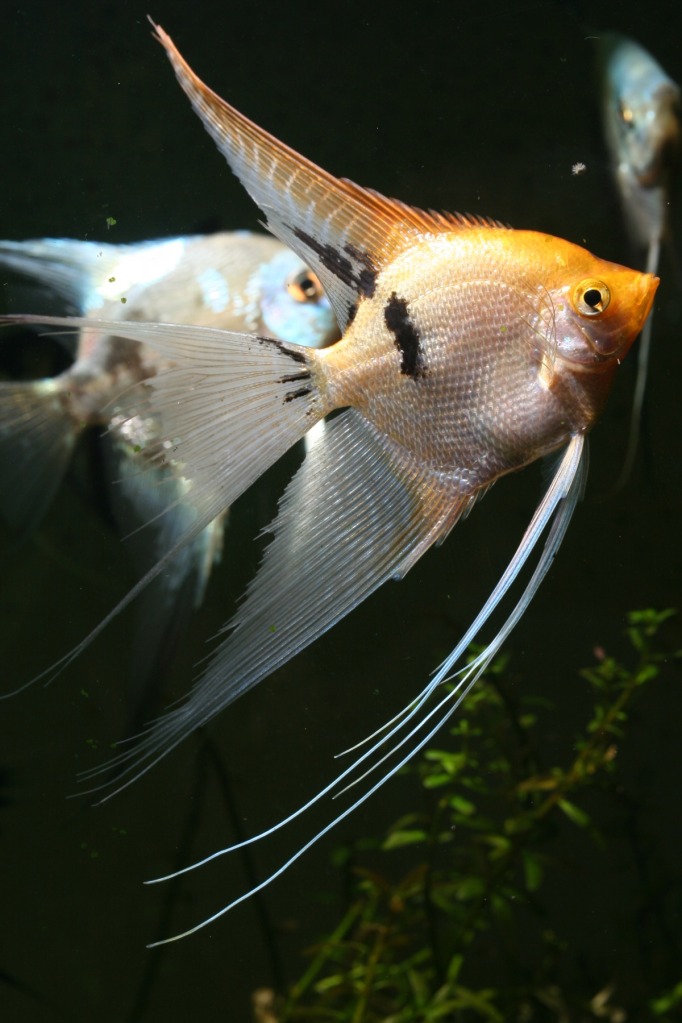 and this a typical koi :- 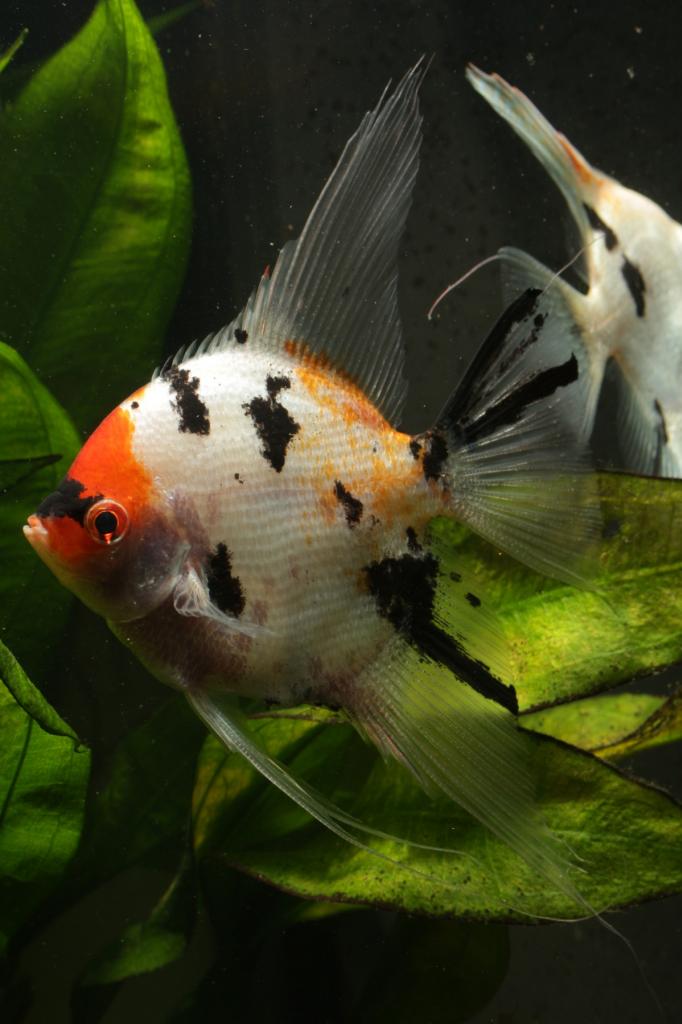 Its body is quite 'lemon' shaped, that is, it is longer than it is high. I like angels that have a nice round body shape, just my preference. You'll see that it has quite a pointed mouth a bit like a beak, a 'pokey nose' as I would say. As it gets older and puts on some weight, I think it will be less pokey. The area between the tip of the mouth and the head will 'fill in', not sure with what, it's just something I've observed in Angelfish. So it will look a little rounder.

I've also noticed in ill angelfish, that they can loose the said tissue (the triangle above the eye) which gives the fish a more 'pokey nose'. I'm not saying your fish is ill.

Although it seems to have quite a rounded forehead, which would indicate female. The profile underneath seems quite short, the chest isn't too pronounced, so it's more indicative of male. Which one? I'd say male too.

Just in case it wasn't obvious, a blushing angel (s/s) will have pinkish gills when it is a young fish, but that changes over time. A blushing angel always has either two blushing parents OR one blushing parent with the other a ghost OR both parents were ghosts... if I remember correctly.

Thanks for the info, you may be right on this little one being ill, I noticed it was the quietest in the tank so whilst most of the others rushed forward this one was hovering in the middle but I was captivated by it's markings so I decided to go ahead anyway hopefully with a bit of tlc I can bring he/she round and hoping once mature he/she will make a nice centrepiece for my tank, will keep you posted

Lively and alert fish, especially when young is a good sign. If it's feeding okay now, no problem.

If not, try some alternative food. When this fish was younger, it no doubt chased baby brine shrimp to eat and survive, it's very natural and they do this instinctively.

Sometimes young angelfish just look at flake / dry food as if to say 'what on earth's that? where's the live brine shrimp?'

Yeah, keep us all posted.

Here he/she is as of today, I also picked up another Angel which I believe is a Platinum Pearlscale? please don't tell me I have a pair lol they are getting on well but my Gourami has taken an instant dislike to this newcomer not sure why perhaps it is the shimmering scales? 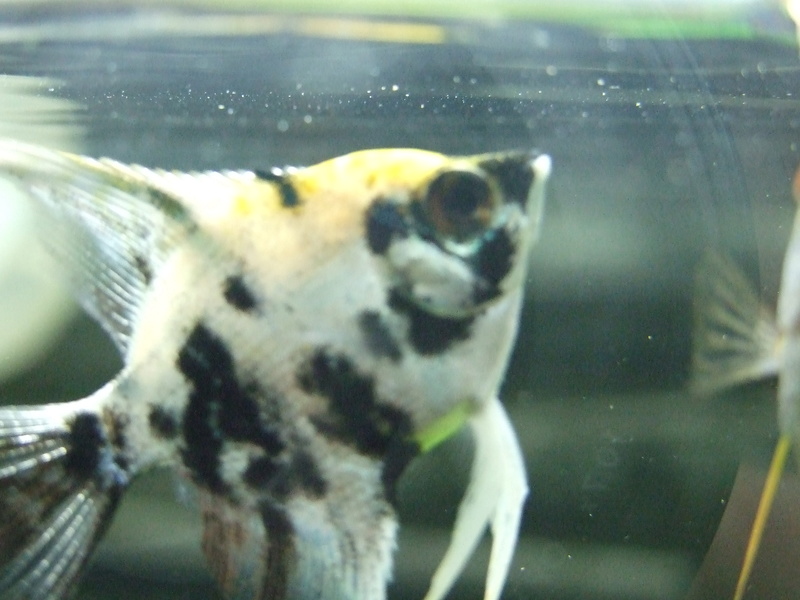 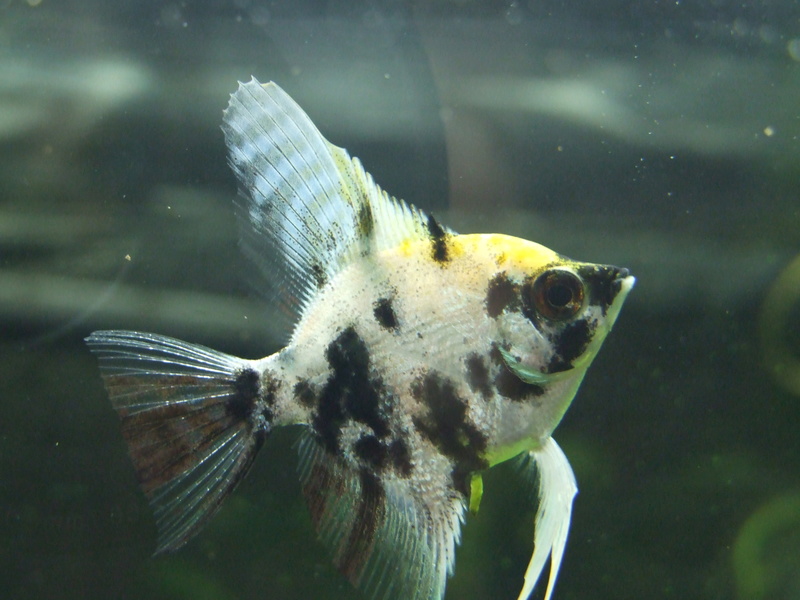 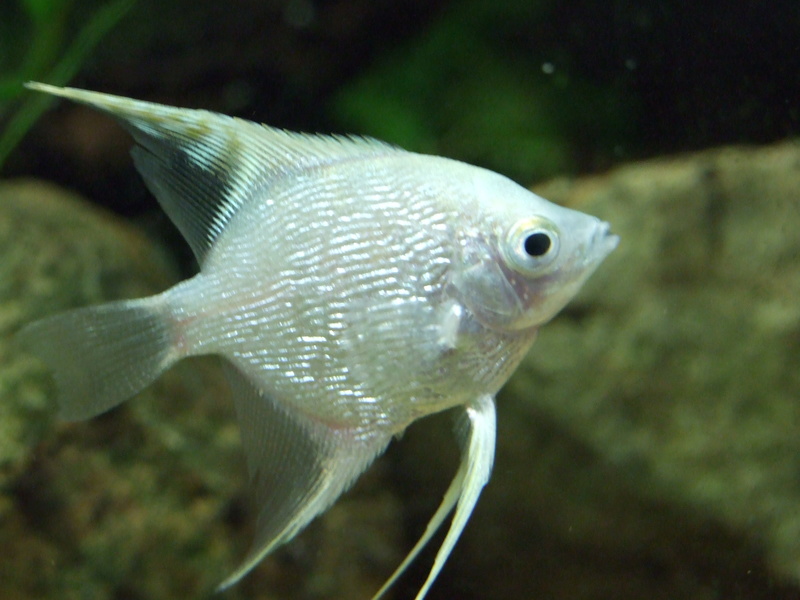 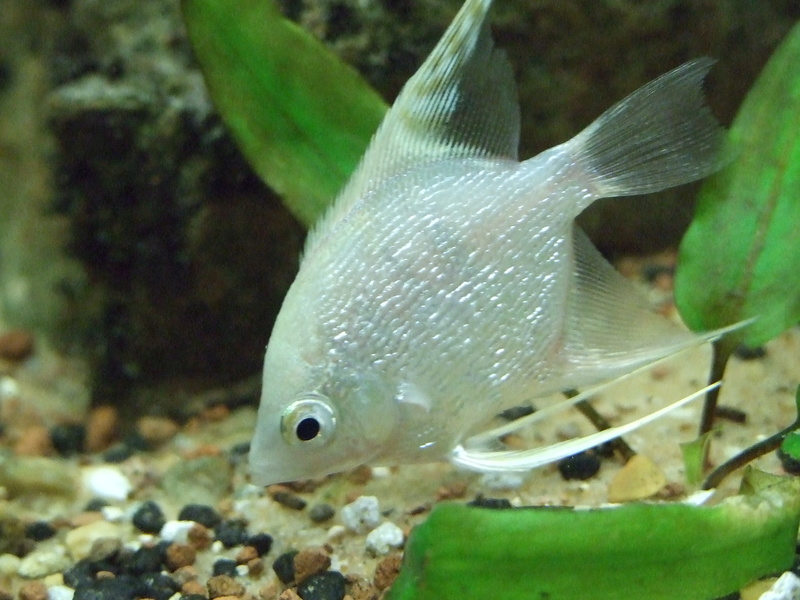 Yes that is a Platinum Pearlscale... very easy to identify.

When comparing the photo of the pearlscale to the other one, I can see what makes the female, a female. An arched forehead and a more angular body. In comparison, the pearlscale is probably male. So potentially you have a pair.

The fry would all be forced to inherit dads, gold, blue and pearlscale genes, but none of them would be platinums. If you wanted platinums you'd have to wait until the next generation, for example, by doing a sibling (bro x sister) cross... (dad x daughter) is also possible in the fish world. Off the top of my head, probably less than 25% would be platinums in the sibling cross, the other cross would be more like 50%. The pearlscale will be lost in the next generation, if the pair aren't both pearlscale.

If you like platinums and want 100% platinum fry without waiting for the next generation, you have to start with a pair of platinums. That's enough 'platinums' for this post.

I've always liked the look of them.

I'm not surprised you were drawn by the markings on the gold marble ... he/she is stunning. When I saw the first few photo's my gut said 'female' but Phil is normally right. Perhaps it's the fact that he/she is so pretty that made me think 'female'

I hope they both do well for you

they are both doing well and eating like piggies now so I'm pleased! I am beginning to think they are both male which suits me fine, I rehomed my previous smokey pair as their breeding antics upset my other fish even though it was nice to experience and I even got to raise some fry! I miss them as they were great to watch so hoping these two fill that void nicely without the breeding, if they are both male I take it they can coexist peacefully? or would two females be better (incase that is what they are)? so far they are getting on no problems but I know they are young. I have no other angels and don't plan on getting more so hopefully they will be ok.

Some angelfish are naturally aggressive, others less so. In my experience aggression doesn't correspond to the sex of the fish. Angelfish enjoy having their own territory so lack of space can increase conflict.

If they pair up, they may well lip lock and test each other to make sure they're breeding with a good strong mate.

Sometimes fish learn to live with each other, sometimes they don't learn to adapt and it gets 'beyond a joke' when it's necessary to separate them for their own good (they can end up stressing each other out and physically damaging each other) beyond what is reasonable.

That's what's quite interesting about angels to me, they have their own personality, which can't be predicted. It follows that, the only way to see if they're going to get along, is to try it and see how it works out.

It's the age and size that's putting me off.
But my gut and instincts are telling me it's a male, along with the new pearly.
Do I assume right that they are both youngsters?
And I mean very Young!

Hi, yes they are young I would say around 50p body size

the marble is the male and the pearlscale the female, they are just preparing to lay eggs for the first time now and have found a nice spot on the heater! they haven't been as near as aggressive to each other as my last pair so long may that continue