Under construction and dedicated to angelfish, this 4'+ deep, 8' wide rack will enable me to slot 4' tanks in sideways: 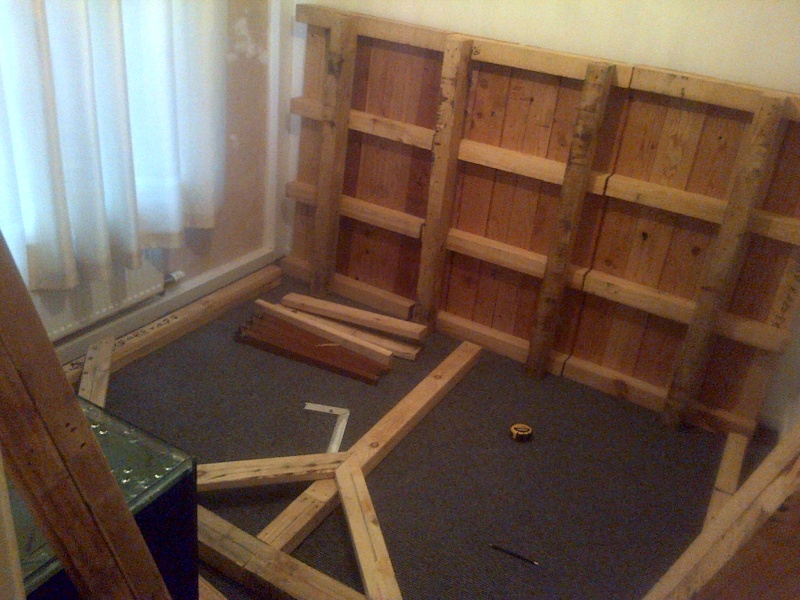 On the back wall is the top shelf which will sit on two main beams. One main beam is laying on the floor. The design is more 'working with what I've got' rather than an exacting construction but it will do the job.

Over the last couple of weeks I've been building my 'monster rack' - dedicated to angels.

Having researched many tank stand designs and considered the 'get as much water in there as possible' philosophy, from a couple of large industrial pallets (which were free but awkward to work with), I made: 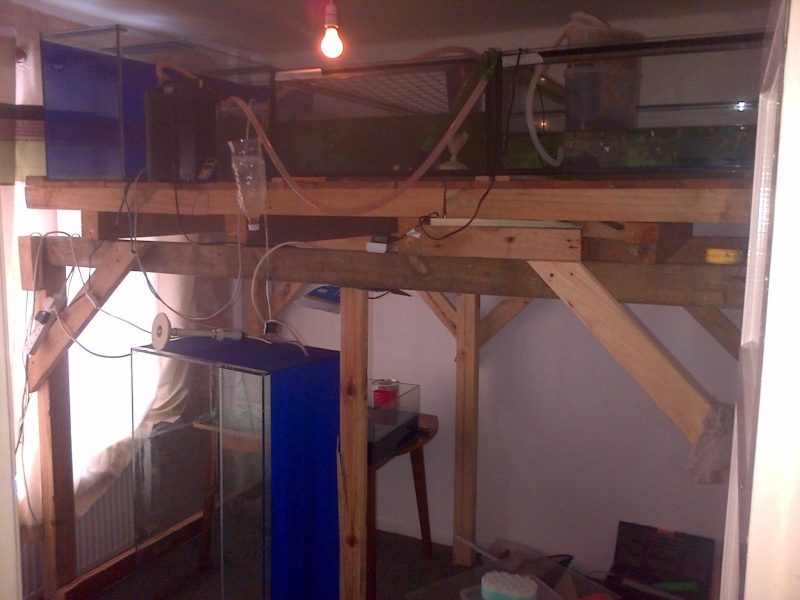 For the 2 lower levels (not built in yet) again I will use similar size tanks, it depends what is available at the time, anything up to 56 length will fit on, but probably nothing less than 48. I may add some 24's but they will only stay there until the other 'mini monster rack' is built!

Here's a new smokey, I think he's a male: 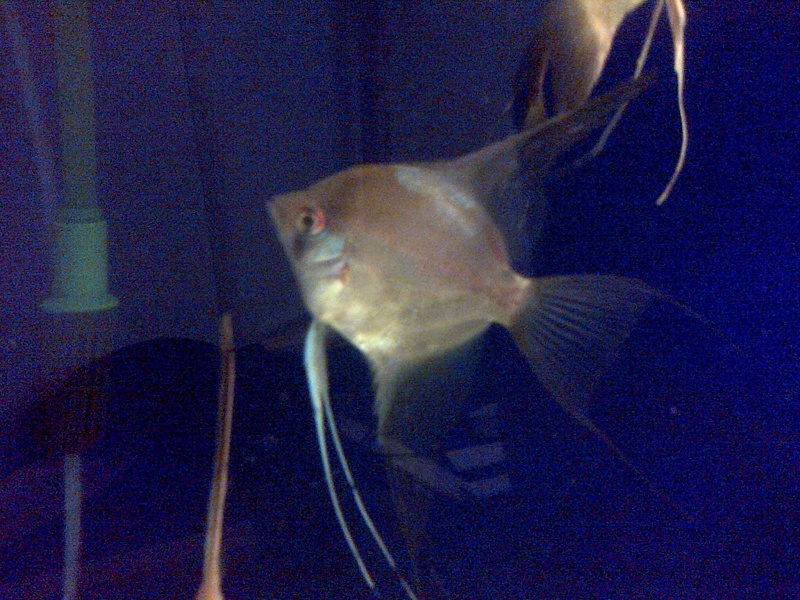 I picked up a pair of marbles, no pictures yet, they're just settling into their breeding tank, hopefully I will soon be able to produce something other than white gold marble ghosts!

I now have 10 Bulgarian Greens (I added another 4) and although they've grown a lot I really wish they'd start pairing. I think the largest male one has, but it's with a cobra (Zebra lace comb-tail veil)! I'm a bit confused about this particular b/g male, because he simply looks different to the other 9, this is the best picture I have: 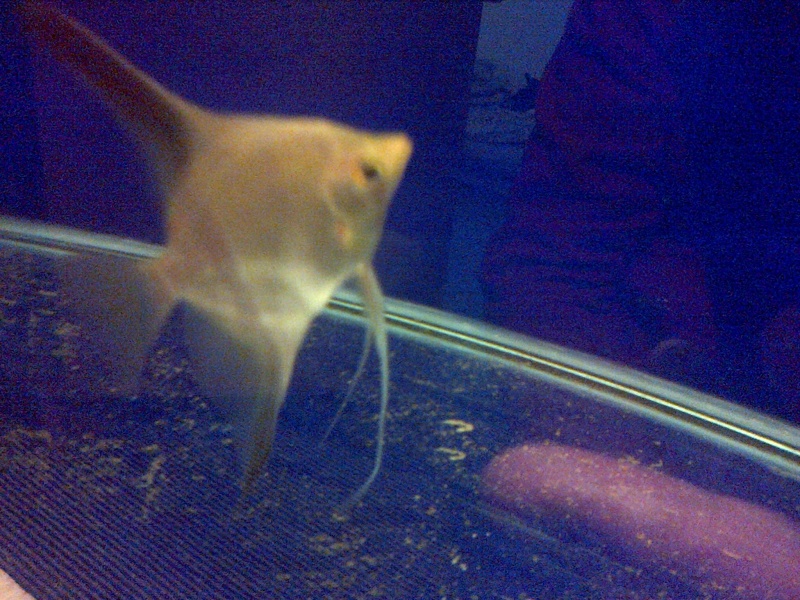 My photography skills are getting worse! 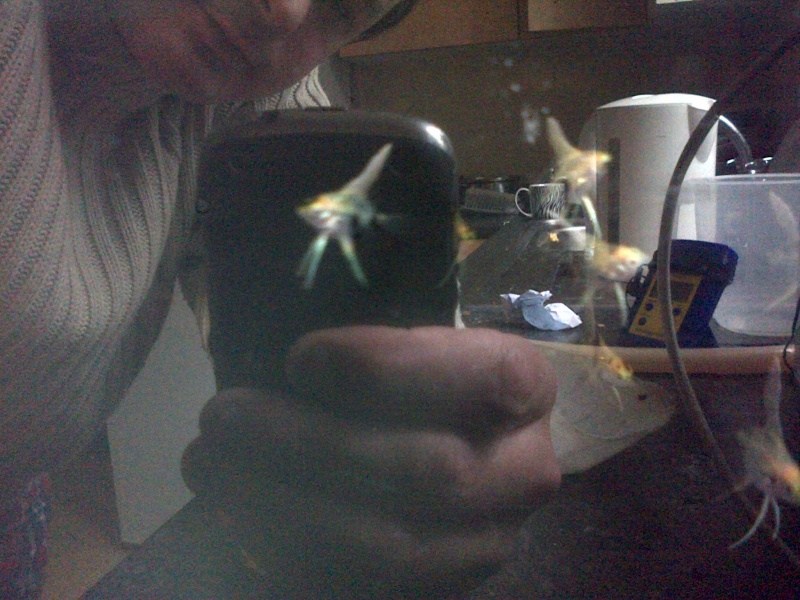 I'm much in need of a DSLR camera and then I just need a website to upload my pictures to!

It's been a busy month, but I don't seem to have done much. I have plenty stock of working suspended lighting units, bulbs and wood - it's fun finding my bargains.

Breeding wise: My gold x koi have had a bit of a break. I was going to sell them, but it can take such a lot of effort that in the end I just decided to keep them. My marbles look like they're on the verge of spawning, they've been lip locking I just see it as fairly normal and don't pay them too much attention. I keep checking for tubes, but I tend to do that anyway. I added a blushing marble and wild zebra male pair. Those are also lip locking too. It's nice to visit sellers, I could do that all day long.

I'm thinking of making my own 18" cubes for breeders, using new glass. Though I think I'd make them a touch taller, to make sure there was 18" of water depth. Will have to price it up, I don't think there are any shortcuts on this one and I also have to think about internal filtration design

- I think I'll be able to come up with a good design, purpose built with plenty of filtration capacity.

The fish room is a nice constant temperature, very happy with that. Feeling hot hot hot.

I've developed the angelfish types app, it need a bit more work, but I'm fairly happy with it so far.

Due to let some of my babies go, fishbags... add to shopping list! Time to check the demand

Thanks for keeping us updated, it's always good to hear how other people's projects are coming along.
_________________
Blessed are the cheesemakers!

- no harm in keeping them all for now.

The angelfish app http://angelfish.org.uk needs further work on the descriptions, but it generally works as a prototype.

Modifying a tank into four breeders. I also learned that when building tanks, although extra depth of water normally means thicker glass, the quality of finish of the glass edges plays an important part in considering safety factors, as that's where the cracks start from! Oooooh... and also... in the case where you might have a 2 foot tank and brace it top to bottom with glass to make a 6" filter compartment, you need only calculate glass thickness for a 18" tank. That might mean nothing to some people, but for those building internal filters, it could mean you don't need to use 10mm after all.

Here's a photo of my smokey angelfish: 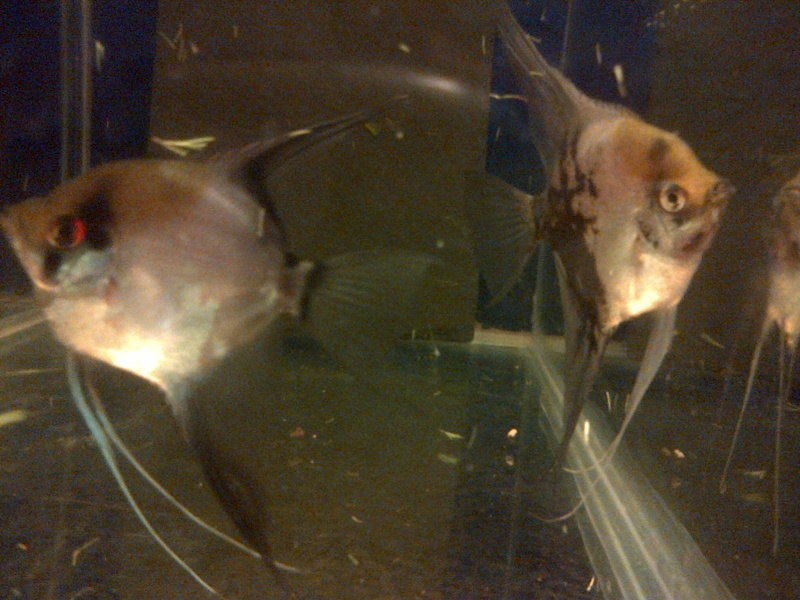 One from Viscum (male) and the other I picked up a few months back from a new aquatics shop in Batley, West Yorkshire. I'm hoping the one on the left is female. The one on the right seems to have quite a pink'ish body that isn't seen in the female and I suspect she's het for pearlscale too. They're not a pair yet, I'm matchmaking - just for fun.

Addendum: With a bit of mathematics
When trying to pair fish, even if you couldn't see the fish, you still have a 50/50 chance of getting a male and a female. Here's the scenarios, where M=Male and F=Female:

I just wanted to show you my top row, fitted with filters and slate: 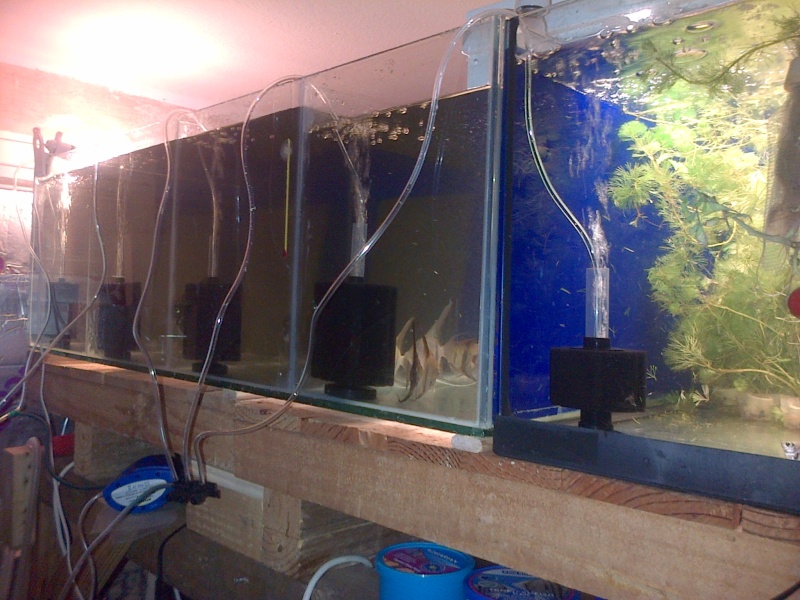 I feel a bit more organised now. Might start building the 2nd layer as I want to get my reservoir repositioned.

I know we're all lucky if we break even! And that excludes the hours spent in care, it's just nice to get something back for the brine shrimp they've consumed. Yey!

For the sake of the cost of a few metres of air line, wouldn't it be better to route the airlines at the rear?
Otherwise looking good. Woodworking can be fun, and rewarding when you're looking at your finished handiwork. But not as much fun, or as rewarding, as watching your angels swim happily in their tanks.
_________________
Blessed are the cheesemakers!

Pterophyllum wrote:For the sake of the cost of a few metres of air line, wouldn't it be better to route the airlines at the rear?

On reflection, it does look a bit silly doesn't it! It looks like it was constructed by someone with poor quality valves... an underpowered air source... in an air line drought.

Yes, I take great joy in keeping angels. They're the only fish I have right now (except 2 catfish which don't count). My fish room is the only facility I've ever managed in which I take a genuine interest in the product

I'm very jealous! Glad to see mine have gone to a good home. ^.^

Well, it does take up what would have been a small dining room but that's a sacrifice I can live with which doesn't affect anyone else.

I'm jealous too Blither ... I wish I had the space (not to mention the energy) for at least one more good sized tank. There's so much I'd like to do but lack of space stops me every time

Every system has constraints, so you always have to work within the constraints you've got. So don't be too jealous

Well, I've just got one tank right now, which is where it all started. The tanks and racking have all gone to good homes. The Pinoy pair (Ratbag and Battleaxe) are still going strong, though Battleaxe still has to put up with Ratbags constant 'I'm the boss' behavior.

I don't think this pair will ever parent raise and as I've moved house I don't have the room for multiple tanks so I'm just enjoying what I've got. Right now the 'blues' are looking lovely under the dim moon lighting.
[Tried to take a picture, but as you all know, my camera ability and photography skills are shocking]

I've switched to small daily water changes (2L a day) which is far easier than carrying buckets around and I don't have to heat the new water either, because there's no significant temperature drop. With luck (and some amount of water testing) that should keep the nitrates down enough (there's only 2 fish in the tank).

The coral gravel has been keeping the ph up to about 6.5 (KH 2) so when I moved house and dumped the old water I used a small amount of bicarbonate of soda to harden the new water (my new supply is still very soft). Of course I adjusted the water before the fish went in and the fish were happy. I should be able to rely on the coral from now on and only used the BOS because I needed lots of new water quickly.

Yeah, it's all good but it's hard to gain more experience when nothing much is going on.