Does anyone in the UK breed Pinoy Ghosts like the one in the picture (Flickr link) below? and if so how much do they cost? I also like Platinum Blue (I like the long finned variety with no gold). Any help you can give would be much appreciated.

I have some young pinoys, some of which are ghosts, but as all are either smokey or chocolate their actual appearance is slightly different from the fish you've linked to. I also have a limited number of pinoy paraibas. The fish in the link looks like a veiltail, at present I only have standard fin, but I'm working towards veiltail blues, pinoys, etc. It's also worth noting that the blue colouration is very dependent upon mood and lighting conditions, so although most pinoys can look that blue in the right conditions, you don't always see that intensity of blue on them. Also youngsters don't show the same intensity of colour seen in adult fish.
This is one of my pinoy paraibas... 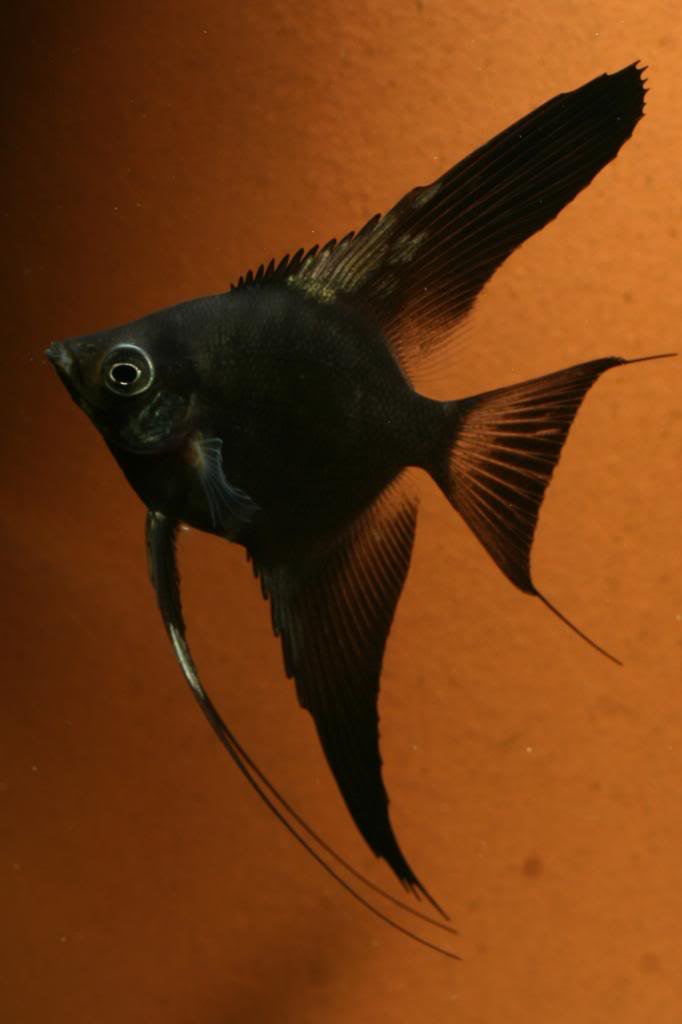 and this is one of it's smokey or chocolate pinoy siblings.... 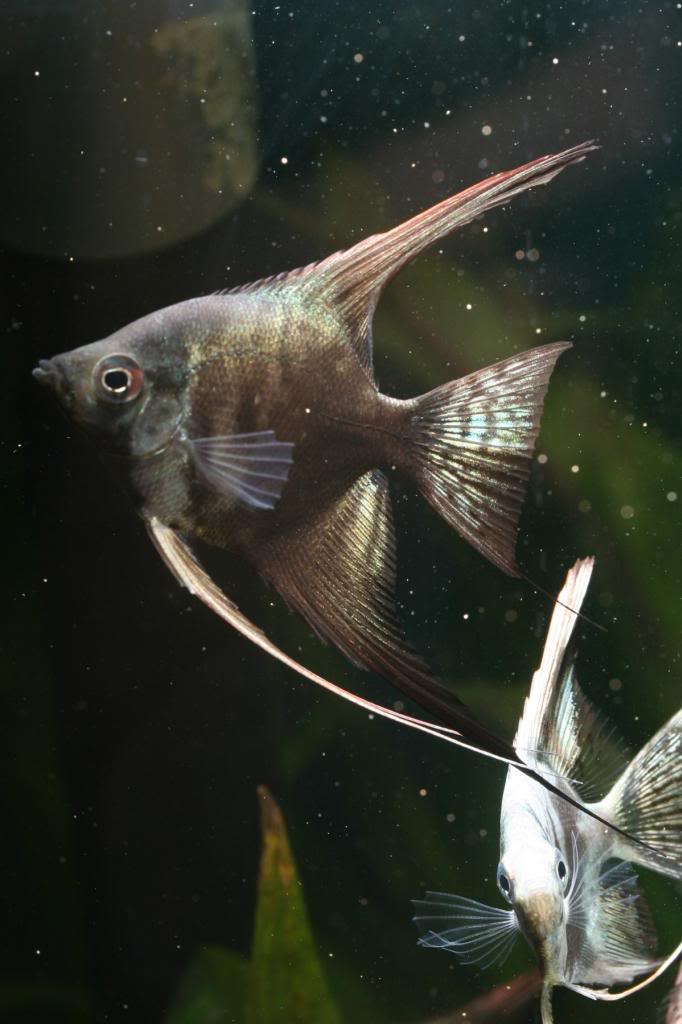 Thanks Pterophyllum....lovely fish. I am quite new at keeping Angelfish and still getting used to the associated words and strains available. I don't really like the very long veil tails but I do quite like the tall finned varieties. Would I be right in thinking paraiba means the fish has shiny patchy areas and some areas that appear matt?

In the photo link I gave I suspected that lighting played a big part in the colour of the fish. I would still like to find some that are similar though....are they available in this country or should I choose another strain?

re Platinum Blue....do you know anyone who breeds them?

Hi Flossie,
The photo you linked to was taken by, and is of a fish belonging to a breeder in the Philippines named Ken Kennedy. Names applied to some angelfish varieties can be a little confusing.

Back in the early 1990's a new variety of angel became available, this variety was called "Platinum"
This is a platinum angel.... 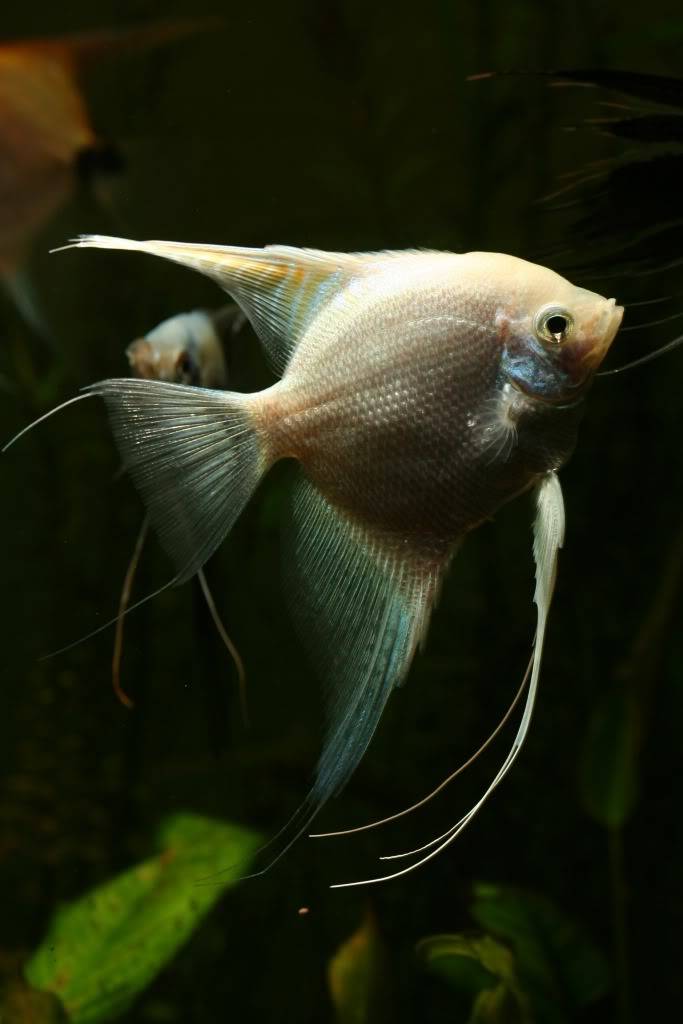 For many years no one really knew what a platinum angel was (or if they did, they weren't letting on!). Having carried out a number of test crosses, Ken Kennedy determined that they were gold angels, which also carried two copies of a new recessive gene mutation which Ken initially named "Platinum Blue" for which he used the abbreviation pb. Recessive means that a fish must inherit two copies of the gene, one from each of it's parents, for the gene to "express". The reason he called it Platinum blue was that he discovered that fish with the gene which weren't gold had much more blue on their bodies.
After a while it became clear that the name "Platinum Blue" was causing some confusion, so Ken chose to rename the gene "Philippine blue" keeping the pb abbreviation.
Unfortunately this has not ended the confusion as although many have adopted the name Philippine Blue, others prefer to use "platinum blue" or simply "blue", which ever name is used, it's the same gene which is being referred to!

Ken also proposed the following naming scheme which, once again, not all breeders/keepers follow :-

Any fish that has at least one dark gene & 2 Philippine blue genes is a "pinoy". This means that there are lots of possible pinoy varieties, pinoy zebra, pinoy ghost, pinoy smokey etc., etc.

A blushing fish is a fish with two copies of a gene called stripeless, blushing have several distinct characteristics, the primary one being that their skin is matte in appearance, and much more translucent than normal. Youngsters usually have characteristic clear gill plates allowing the red colour to show through, hence the common name of "blushing". As they grow, patches of reflective guanine are deposited, giving areas which are much more reflective. Another characteristic of blushing fish is that they rarely have any striations (horizontal stripes) most noticeably in their dorsal fin, but also in the anal & caudal (tail) fin.
The most well known blushing variety is a "koi" which is another name for a blushing gold marble.
compare these two...
gold marble... 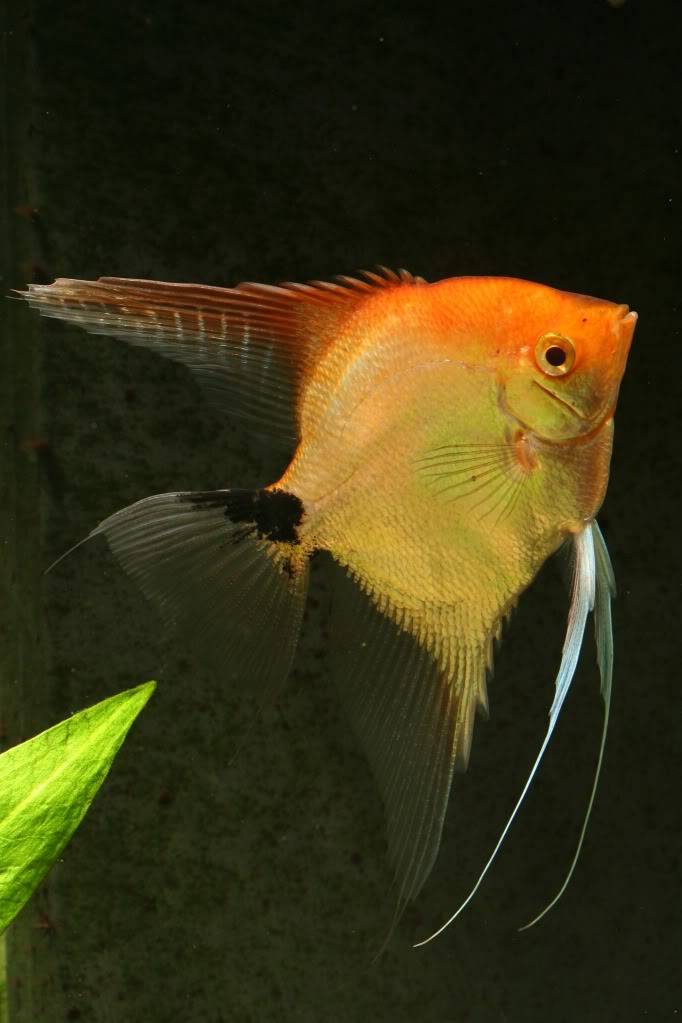 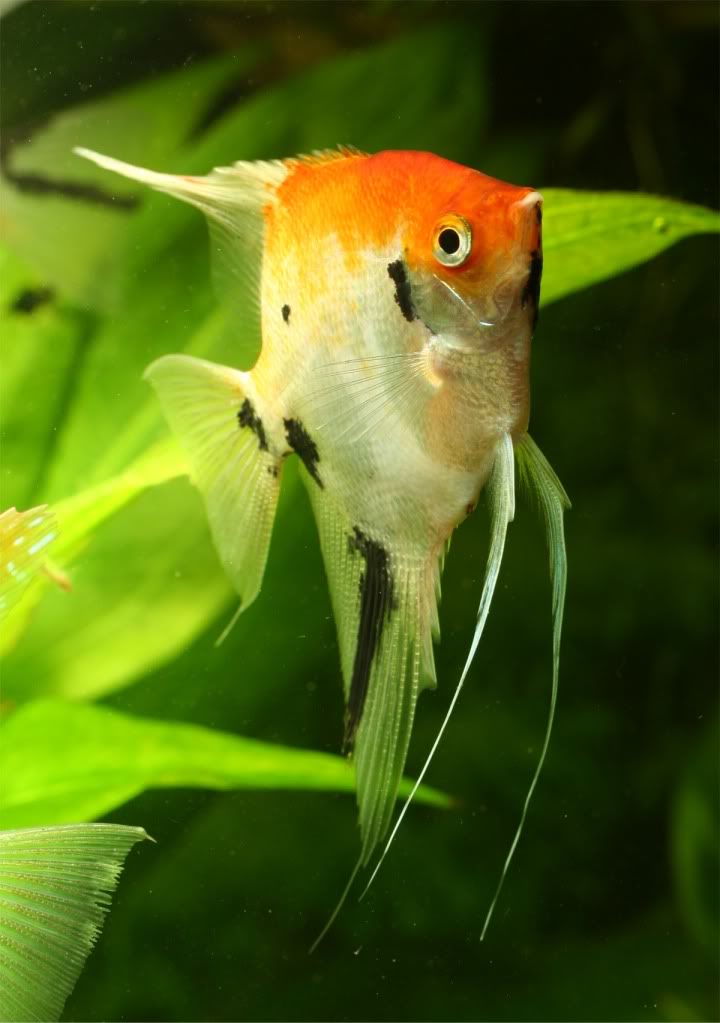 Not the best example, but if you look closely at the koi you'll see in some areas the skin is much more reflective whilst there appears to be a less reflective white cross on his chest.

Ken suggested that the name paraiba be applied to any blushing fish which is homozygous for (ie has two copies of) the Philippine blue gene.
Once again this means there are lots of different possible paraiba varieties,
including Paraiba smokey... 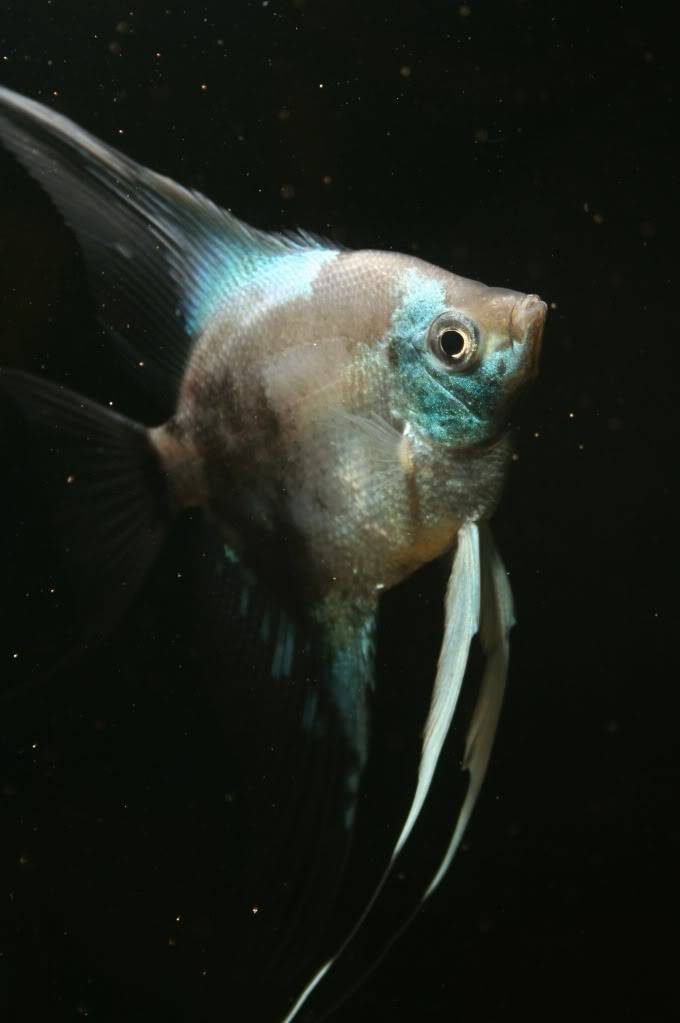 In paraibas the pb gene seems to increase the extent of guanine deposits and tends to make them reflect blue.

Other paraiba varietys include..
paraiba koi... 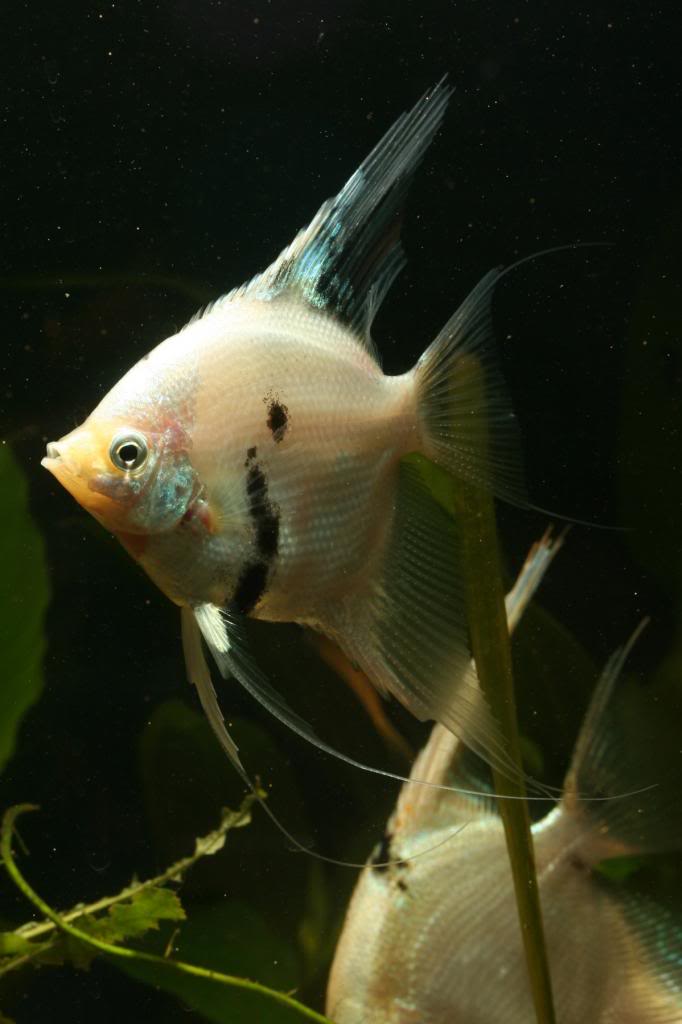 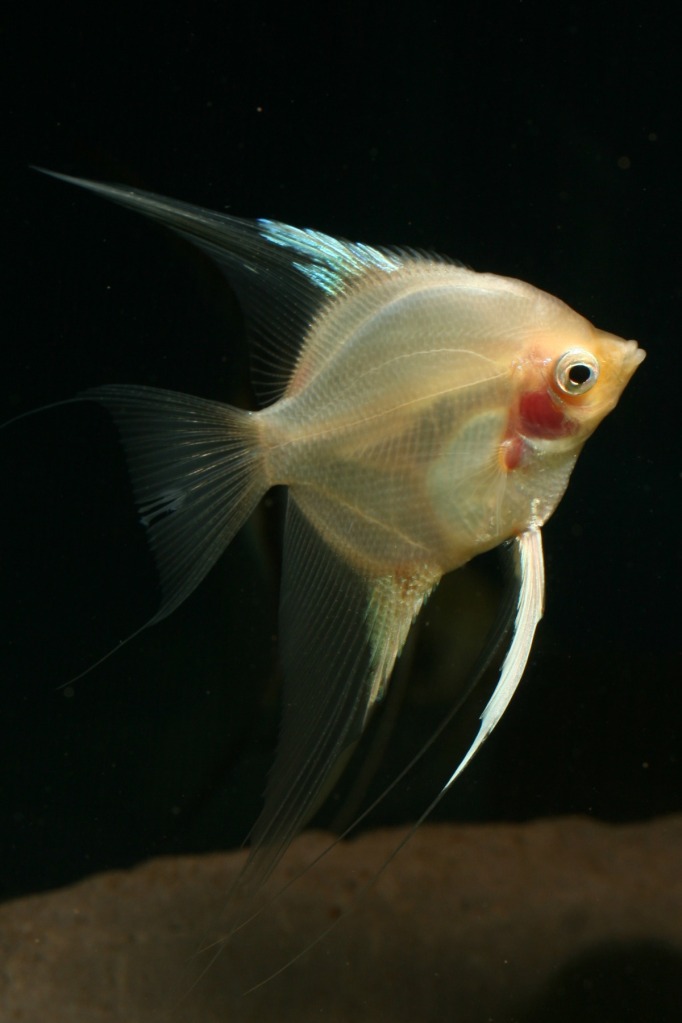 Sunset being a name sometimes applied to gold blushing angels. 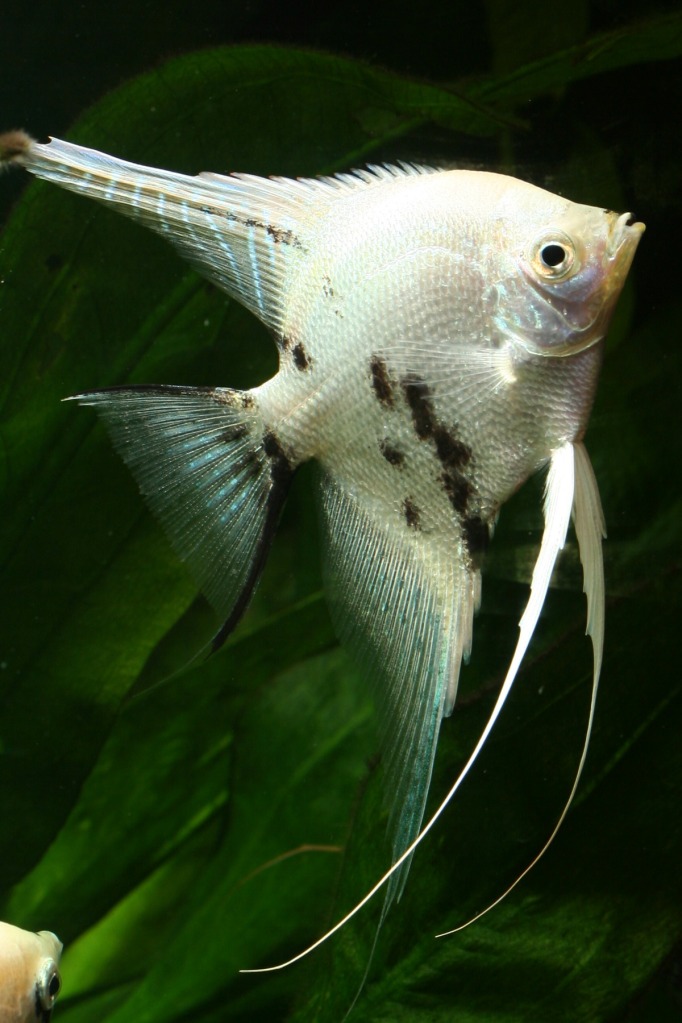 Whilst any other variety is a "blue"
eg blue smokey 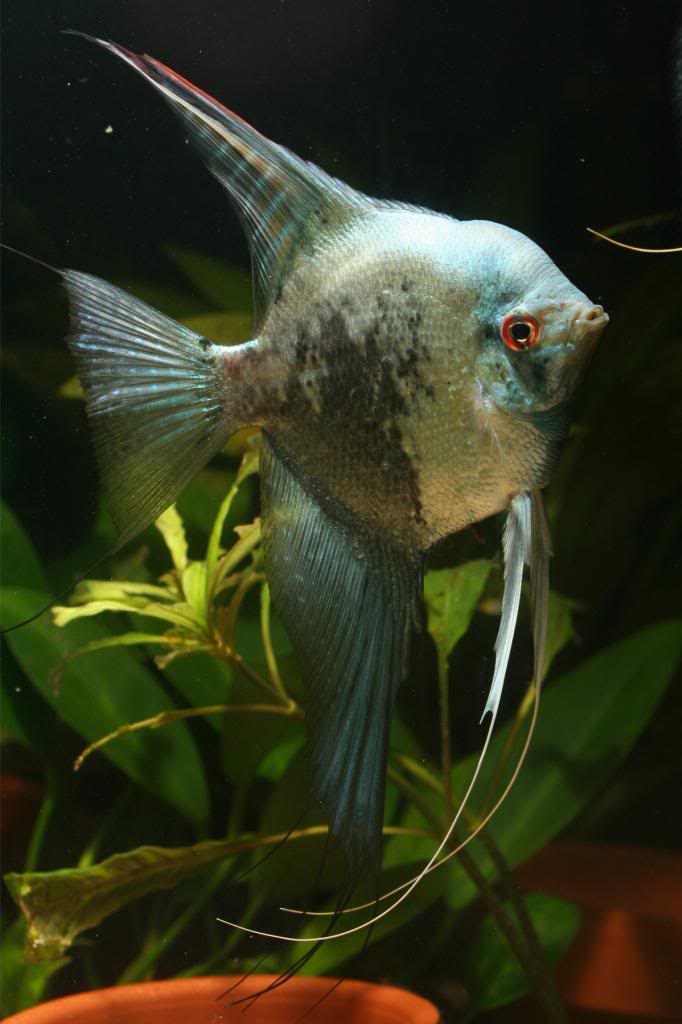 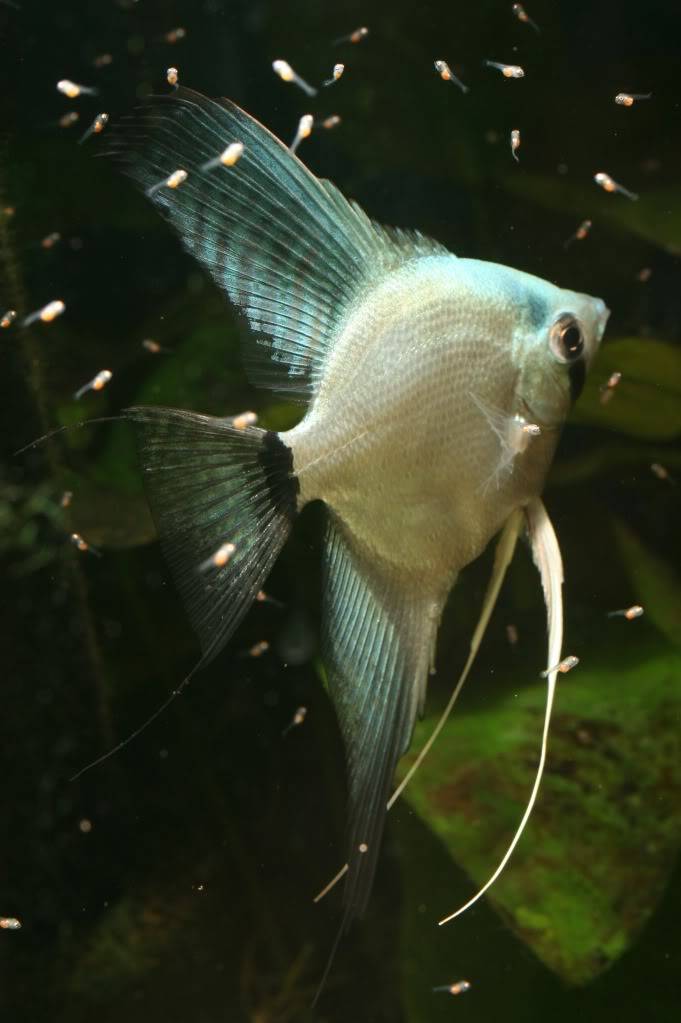 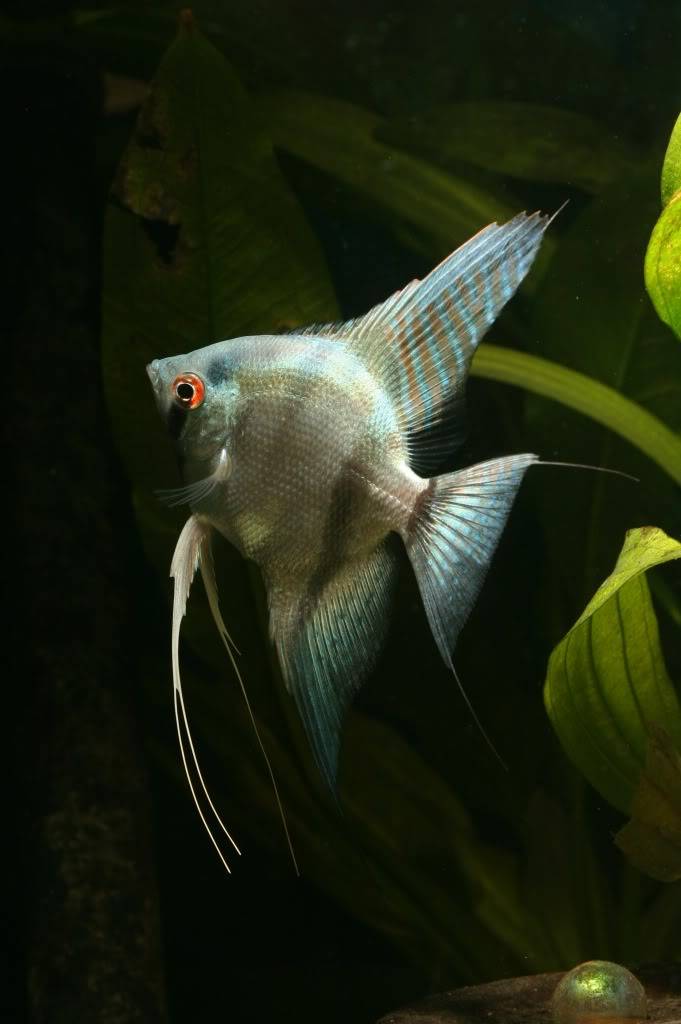 So after all that, the simple answer to your question is that there are several breeders on this site who are working with the pb gene, myself included.

finally with regards to fins, there is a gene called veiltail, fish with one copy of this gene have longer than standard fins, whilst fish with 2 have very extended fins and are known as super veils.
That said, even without the veiltail gene being present, there is a fair degree of variation in the length of fins. So, for example, my avatar doesn't have a veiltail gene, but could, possibly, be mistaken for one.

At present I don't have any veiltails that are homozygous for pb, but am working towards having some in the not too distant future!
_________________
Blessed are the cheesemakers!

Fascinating Rob, have you thought about writing a book or three lol?? Or maybe you already have! If not you should!!!

Wow thank you Rob...that is so helpful

Mind you, I now feel very dim indeed! I suspect I will need to read your reply many many times before it starts to sink in.

okay have read all the info again and I now know what I like and don't like. I don't like super veil tails, paraibas or marbles or any that are very dark. I like blue ghost, blue smokey & blue smokey leopard and I guess combinations of those strains and I love the look of Bulldog's blue smokey leopard pearlscale....are there any available at the mo please.

Hi Sandra,
I have some blue smokeys at the shop £5.90 each, no blue ghosts or leopards at the moment, personally I'm not a big fan of pearlscale, but as many of my fish carry the gene, I do sometimes get youngsters that are pearlscales. At the moment the only pearlscales I have coming on (ready soon) are gold marble, koi, paraiba koi and platinum marbles.
_________________
Blessed are the cheesemakers!

there might only be half a dozen decent ones!

May have to plan another visit and sort another tank. Must get cracking on fish house when it gets a little warmer.