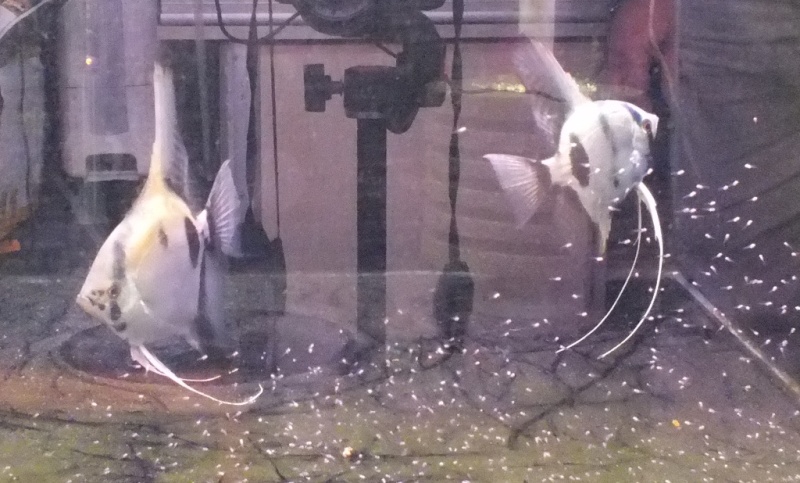 Pterophyllum wrote: you should get some stunners from those!

I am itching to see what a gm/g,S/+, pb/pb ( Blue White Gold marble ghost ? ? ) will look like, almost like a platinum i expect.

Itch no more, it will look like my avatar! He's a Gm/g - S/+ - Sm/+ - pb/pb - otherwise known as a platinum marble. The smokey gene has no influence on the appearance as it's effect is suppressed by the gold marble/gold combination.

the naming of pb varieties can get a little confusing, but in essence
if it's Gm/Gm, Gm/g, or g/g with two pb genes, it's a platinum or platinum marble. The complication arises if it's also blushing

A gold blushing g/g - S/S is often called a sunset so a sunset with two pb genes :-
g/g - S/S - pb/pb could be called a platinum sunset or a blushing platinum, but as Ken Kennedy suggests that all blushing pb/pb fish be called paraibas, you're most likely to see them called paraiba sunsets or platinum paraibas!

Blushing gold marbles either Gm/Gm - S/S or Gm/g - S/S are known as koi, so koi with two pb genes are known as paraiba koi.

i will just have to be patient now.